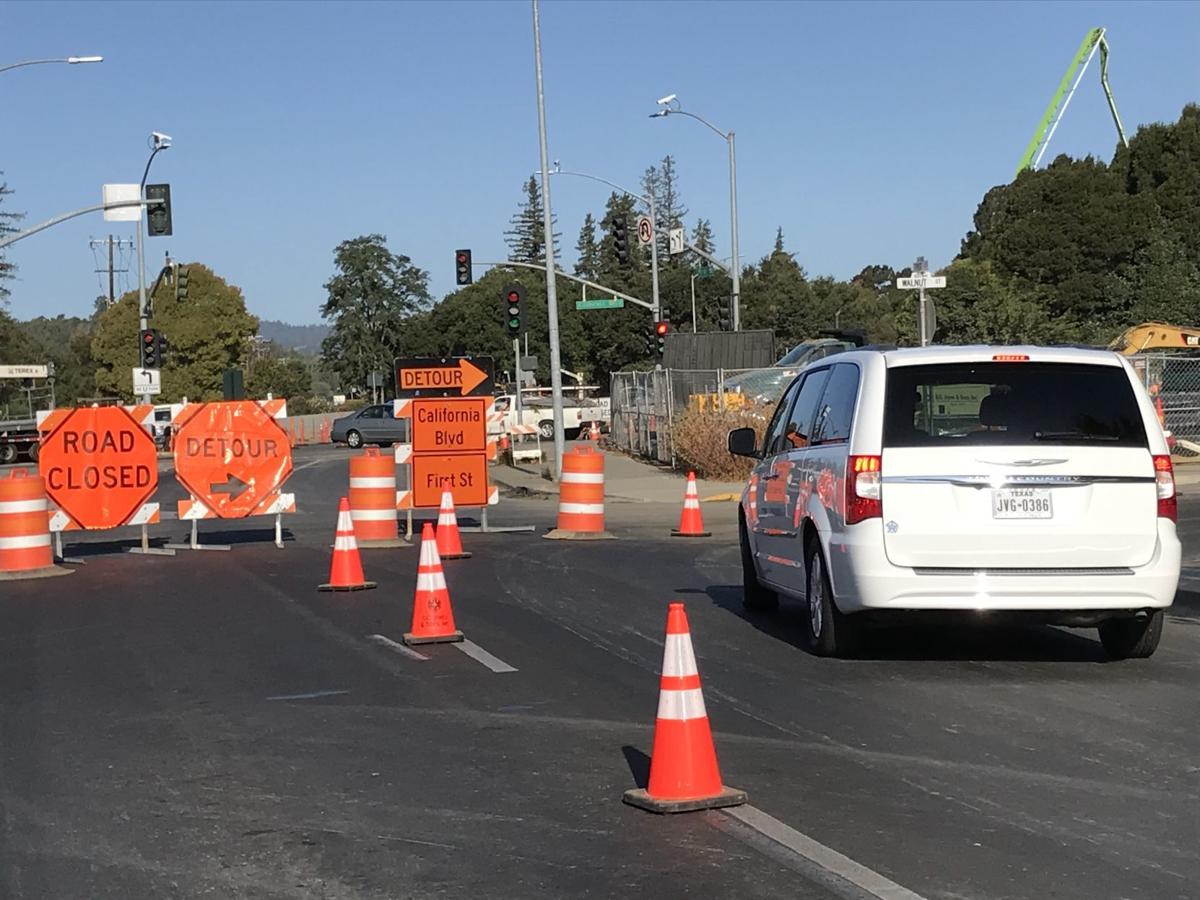 First Street at California Boulevard was barricaded Tuesday morning, requiring westbound vehicles to detour at Walnut Street. Caltrans expects to complete the planned roundabout at First and California in December. 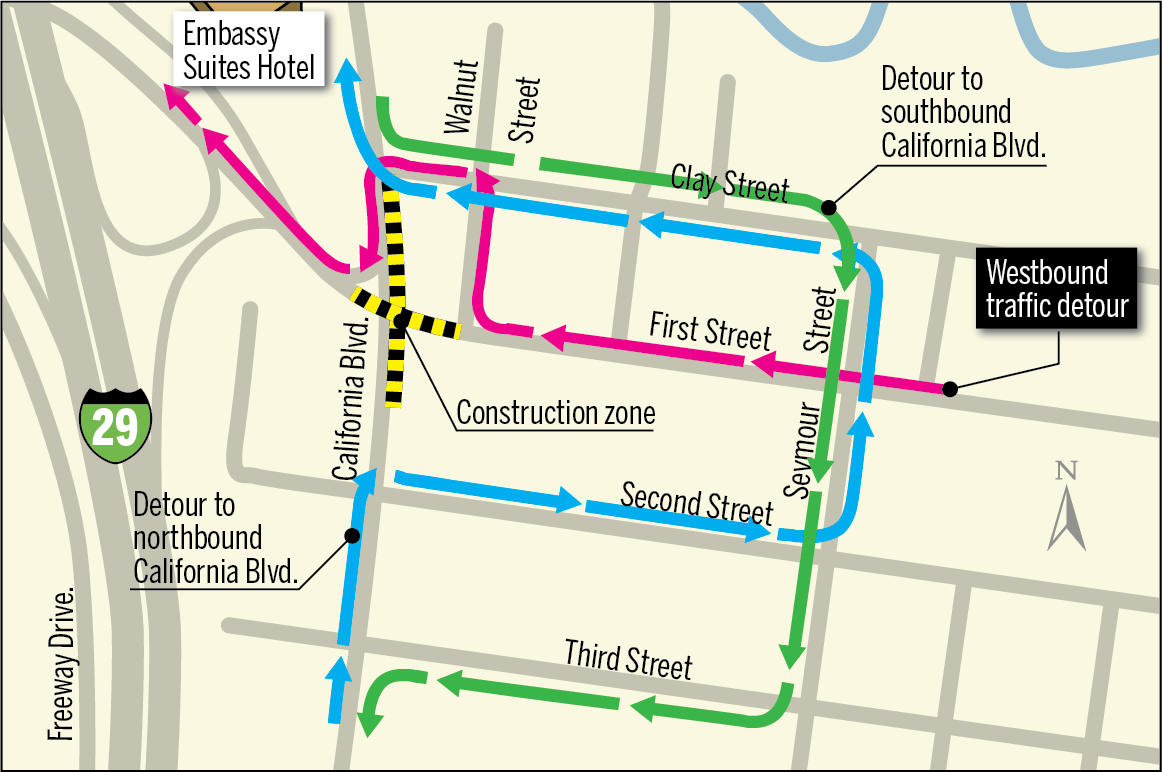 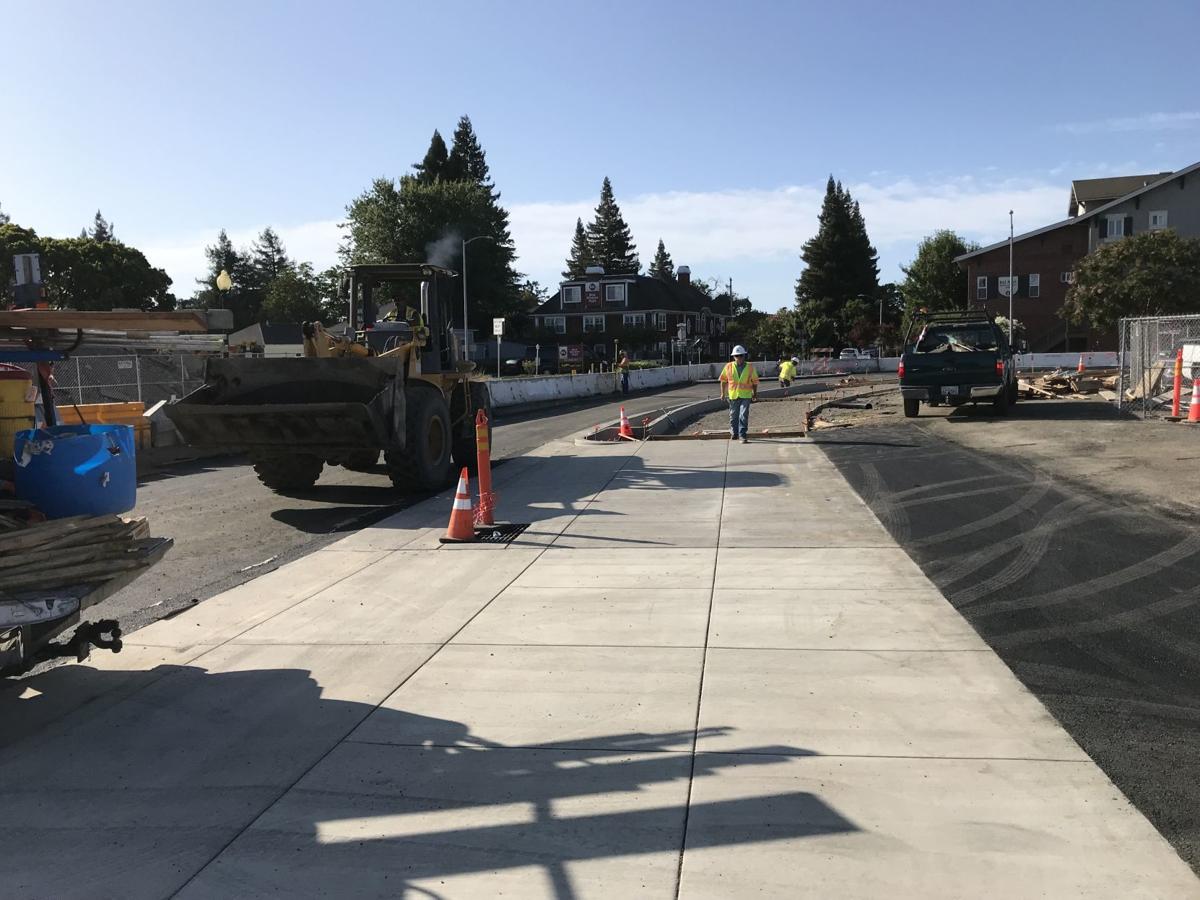 New sidewalk on California Boulevard, between First and Second streets on Tuesday morning. Three roundabouts are under construction at the western entrance to downtown Napa. 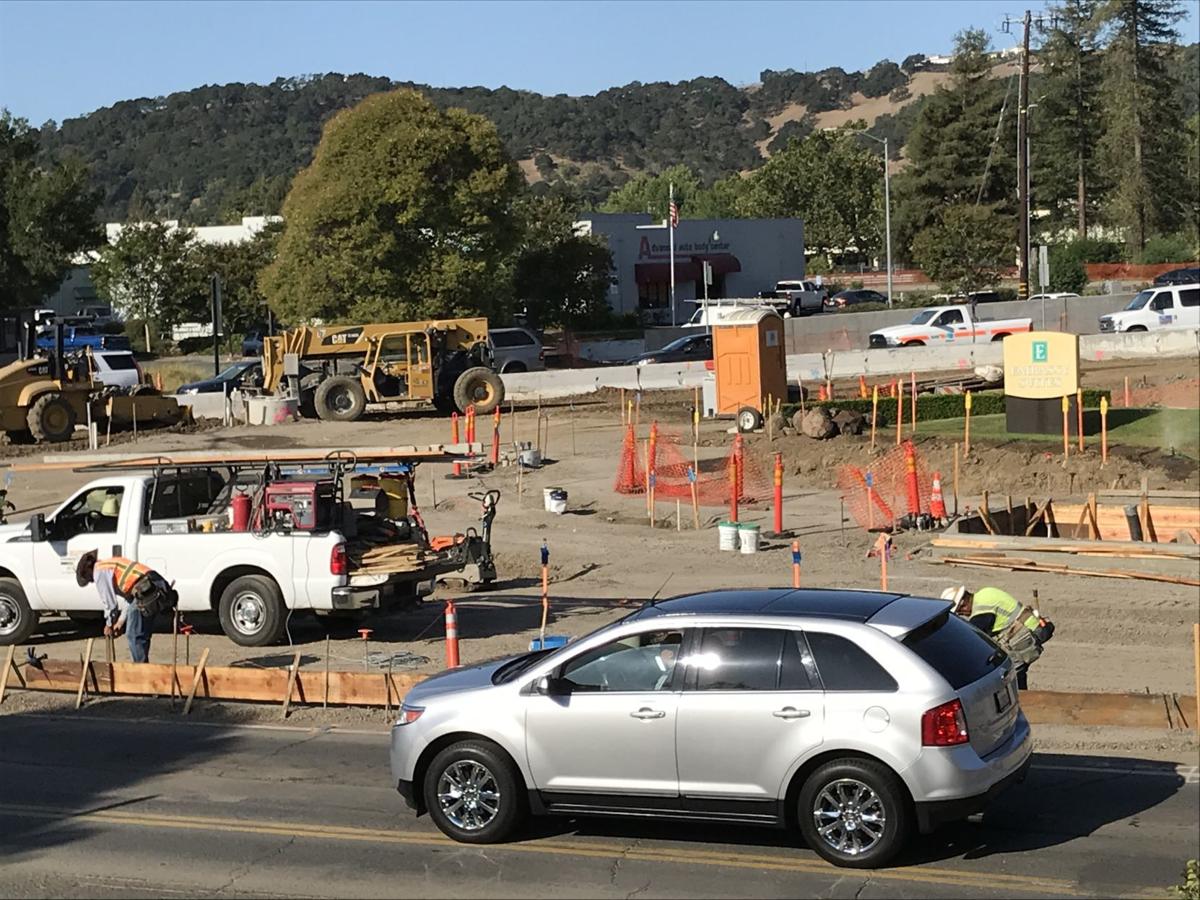 First Street at California Boulevard was barricaded Tuesday morning, requiring westbound vehicles to detour at Walnut Street. Caltrans expects to complete the planned roundabout at First and California in December.

New sidewalk on California Boulevard, between First and Second streets on Tuesday morning. Three roundabouts are under construction at the western entrance to downtown Napa.

There were only minor backups during the morning rush hour as workers began installing the directional signs, orange cones and concrete K-rail needed before the First Street traffic signal is removed, Whan said.

By Tuesday evening, all westbound traffic on First will have to get off before California Boulevard and detour back by way of Walnut and Clay streets. And traffic on California wanting to go north and south past First will be routed onto residential streets in order to continue their journeys.

These detours will be in place through December as the first of three roundabouts at the western entry to downtown Napa is completed. Then the directions of one-way First and Second streets will be flipped.

In contrast to the nearby roar of construction equipment and hubbub of workers setting up for concrete pours, the scene inside St. Pierre Massage and Spa on Clay Street Tuesday morning was pure serenity.

The air was sweetly scented, calming music unjangled the nerves.

“Like everything else in life, you have to be really preventative in how you approach it,” owner Michelle Perotti-Kline said of the nearby traffic alterations.

She considers her day spa the antidote to the traffic turmoil. “Customer care — that’s what we do,” she said, offering her visitor a cup of chai tea.

Receptionist Rachelle Ernst said spa care starts with her phoning clients in advance to alert them to changing traffic conditions in the neighborhood. “Give yourself a good 15 minutes prior to when you think you need to be here,” she tells clients.

Several businesses on California Boulevard are practically surrounded by the roundabout project, but they had no complaints Tuesday morning about the construction at their doorsteps.

“So far it hasn’t been bad,” said Anthony Arata, co-owner of Storck’s Garage. “We’re fortunate to have a lot of loyal customers. They’re finding their way in.”

“The construction people, the city, they’ve been really good,” said Arata, whose entry sported a fresh layer of asphalt.

Arata predicted that the roundabouts would be good for business. They will tame the traffic that sometimes speeds by from west Napa and the freeway, while also leaving behind a new park on the east side of California, opposite his garage.

Next door, Keller Williams Realty was completing its move into quarters formerly occupied by a construction company. The firm bought the building knowing it would soon look out onto a new front door to downtown, said Tim McCall, the team lead.

“We saw the opportunity to be the first thing that people see around the new roundabouts. This has been a troubled intersection for years,” he said.

“We feel it’s moving way faster than anticipated,” McCall said of the project. “Daily I go to ‘whoa!’ — that’s a whole new area” that’s been altered.

The traffic light at First and California will be pulled Tuesday morning for roundabout construction. Let the detours begin.