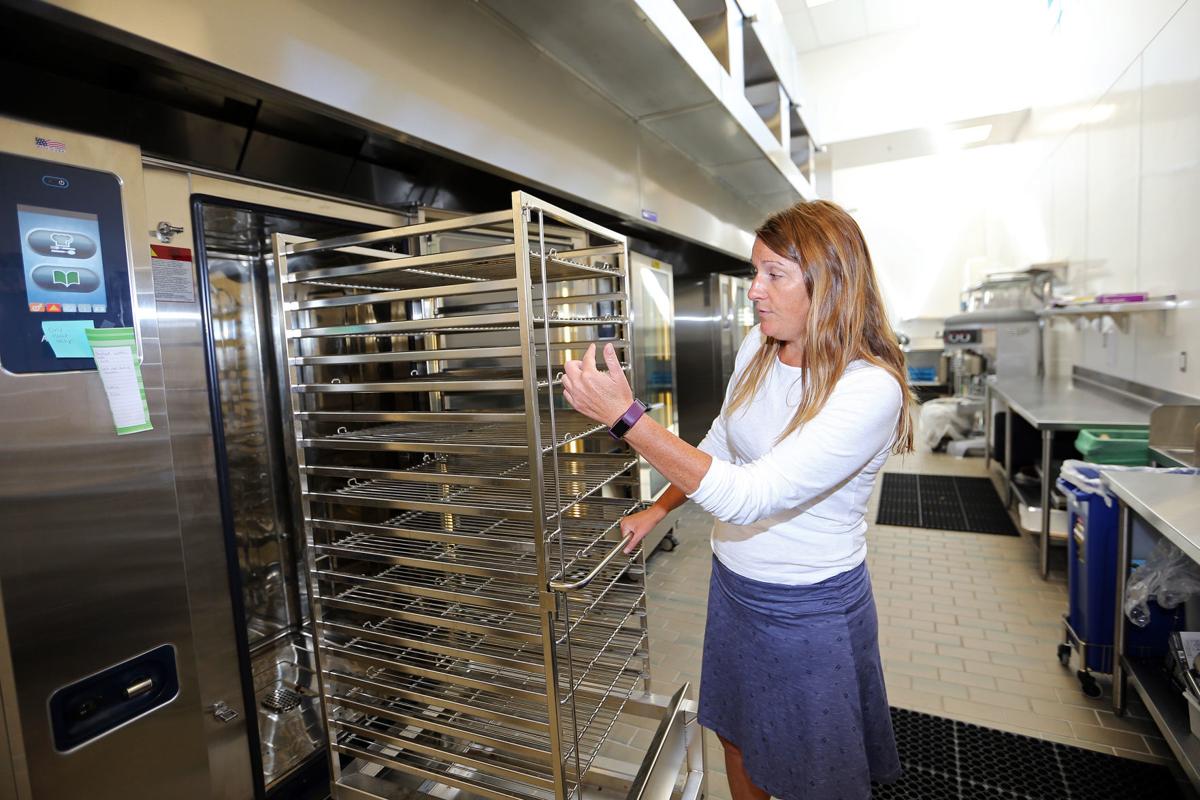 The Napa Valley Unified School District's nutrition services director, Brandy Dreibelbis, pulls a rack from one of three combi ovens - machines that combine baking, convection and steaming - at the central kitchen the district opened in April. The facility inside the former Napa armory on Menlo Avenue is designed to produce some 5,000 meals each weekday for students at 16 elementary schools. 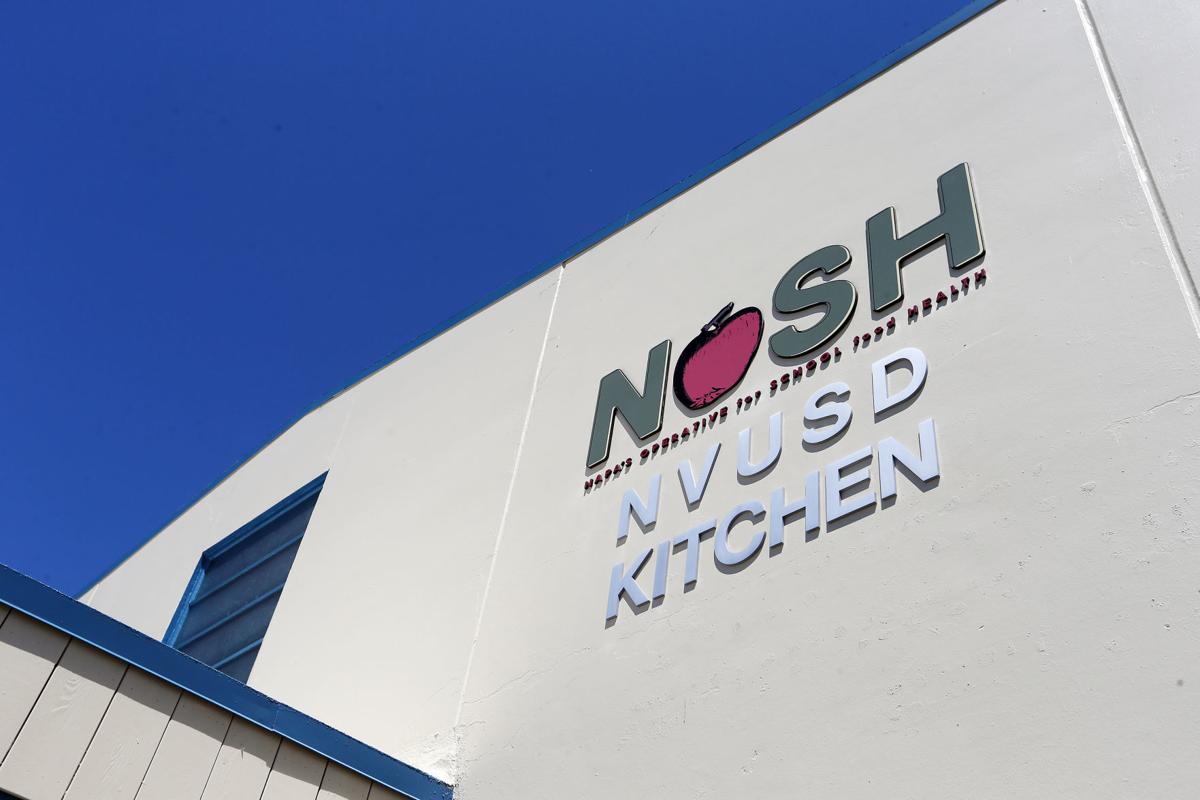 The exterior of the Napa Valley Unified School District's new central kitchen - based inside the former Napa armory on Menlo Avenue - bears the new acronym for the district's food services division. The district began producing student meals in house after ending a longstanding contract with the Sodexo catering firm in 2017.

The Napa Valley Unified School District's nutrition services director, Brandy Dreibelbis, pulls a rack from one of three combi ovens - machines that combine baking, convection and steaming - at the central kitchen the district opened in April. The facility inside the former Napa armory on Menlo Avenue is designed to produce some 5,000 meals each weekday for students at 16 elementary schools.

The exterior of the Napa Valley Unified School District's new central kitchen - based inside the former Napa armory on Menlo Avenue - bears the new acronym for the district's food services division. The district began producing student meals in house after ending a longstanding contract with the Sodexo catering firm in 2017.

The gleaming stainless-steel tilt-out skillet and cauldron-size kettle, the three do-everything ovens as tall as a grown-up, the 20-foot-high cold storage room and freezer are not the kitchen fittings of the latest Napa Valley restaurant. Instead, they form the new hub into which fresh ingredients are delivered – then emerge as breakfast and lunch for thousands of schoolchildren, five times a week.

Since the first week of April, a central kitchen built inside a former armory on Menlo Avenue has produced meals for the 16 elementary schools of the Napa Valley Unified School District. With its up-to-date, commercial-scale appliances and ample storage, the facility is the most visible step yet in the local public school system’s quest for healthier, more appealing food – a quest that began when NVUSD broke away from a longtime contractor and took control of its nutritional services two years ago.

Napa Valley Unified’s new kitchen, which replaces an older facility on the Harvest Middle School campus, is designed to store ingredients more easily, prepare them more efficiently and get the resulting meals to schools quicker than before, according to Brandy Dreibelbis, who became Napa Valley Unified’s nutrition services director two years ago.

“It’s about finding your efficiencies,” she said Tuesday at the kitchen center, which produces about 5,000 of the school district’s 8,000 daily meals. “Anything that saves us a little time is just making us better.”

The central kitchen has been a central goal for both the school district and for Dreibelbis, whom it hired in 2017 from the Boulder, Colorado school system to retool Napa’s school nutrition program.

Dreibelbis arrived at NVUSD in time for the district’s first school year after cutting ties with Sodexo, the catering giant that had been the longtime food-service operator for the Napa system. The move to in-house service followed a seven-year campaign by local parents against a program derided by schoolchildren for menus short on fresh ingredients and long on “hockey-puck” meat and “sweaty” pizzas.

But a key sticking point remained – the state of the kitchen facilities where meals were prepared before delivery to the district’s younger students. (Meals at NVUSD’s middle and high schools in Napa and American Canyon are prepared on location.)

“The original plan was to remodel the old kitchen, but it wasn’t designed to be a kitchen,” she said Tuesday morning. “It wasn’t standalone, which meant you had to deal with traffic, with parents running around, that kind of stuff. … I saw the amount of effort that was needed to bring food into the old facility, and it did not make sense.”

The solution has taken shape within a 10,000-square-foot National Guard armory building that dates to the late 1940s, and later hosted non-credit community education programs organized by Napa Valley College until 2013.

Inside, a collection of modern appliances is mixed with abundant storage space, including freezer and refrigerator rooms large enough for produce and other fresh foods to be rapidly restocked by forklift up to three pallets high. Three trucks deliver hot meals to elementary schools, with plans over the next two years to equip grade-school campuses with finishing kitchens to heat meals from the central kitchen. (To maintain food safety, a trio of blast chillers will cool dishes from 160 to 41 degrees Fahrenheit in an hour and half before deliveries to individual schools.)

A combination of wide, tall interior spaces and sliding doors opening 6 feet across has cut loading times from a half-hour to three minutes, according to Dreibelbis, who said holding times for meals have been reduced by about an hour for the school district’s two daily lunch items – one of them vegetarian.

All of those steps are meant to keep up NVUSD’s momentum not only in producing higher-quality food, but getting more students to eat it, said Dreibelbis. “In school food, the name of the game is increasing participation,” she said. “That’s how a food program survives.”

Outside the Menlo Avenue kitchen, even its exterior has become a symbol of Napa Valley Unified’s aspirations for healthier-eating schoolchildren.

High above the entrance near the roofline are the letters displaying the school district’s new name for its food-service division, Napa’s Operative for School Food Health. Above the name, in bold green block letters and a red apple logo, is its playful acronym: NOSH.