It came on quietly, a silent killer that surrounded us like a slowly gathering cloud of smoke.

It was more destructive than an earthquake.

Longer lasting than a fire or flood.

And we remain in its grip almost a year later.

The COVID-19 pandemic began with whispers from a faraway land. By the end of January, it had started to spread more widely, but had yet to touch American shores.

We began joking nervously about bumping elbows instead of shaking hands.

Then came our first cases. It started with people who had travelled abroad: passengers from a stricken cruise ship quarantined at Travis Airforce Base. A brief ripple of fear went through Napa County when two of those Travis passengers needed to be treated in intensive care unit beds at Queen of the Valley.

“I want to allay fears in the community,” Dr. Amy Herold, the Queen’s chief medical officer told the Register in February

“It’s scary, and I get it,” she said. “When you look at the news, it looks terrifying.” The hospitals in China where the coronavirus was first identified were completely overwhelmed, she said. That’s not happening in Napa.

By the end of the month came the first evidence of transmission between people who had not travelled abroad – a woman in Solano County was diagnosed. Shortly thereafter, the first death, a man in Washington state.

Instantly, it seemed store shelves across the region were stripped of hand sanitizer and cleaning supplies of all kinds.

Within weeks, as cases – and deaths – mounted in New York and Washington state, it became harder to find toilet paper, pasta, and other products more suited to a long snowbound winter at home than for the spring that was just blooming in Napa County.

Even as our national leaders reassured us that the disease would touch us only lightly and pass on quickly, residents were clearly in a grimmer mood.

Quickly everything became a blur – the South by Southwest music festival cancelled, professional and college basketball paused and then cancelled, stay-at-home orders by various counties, a state of emergency from Gov. Gavin Newsom and other governors.

Then the long wait.

Those fortunate enough to have a job learned how to do it from home when they could. Parents learned the art – and frustration – of home schooling.

“It’s not something you can just pick up and do at the drop of a hat,” said Lilea Heine, a preschool teacher and mother of two Browns Valley Elementary students. “As educators, we go to school to learn to do this. It’s a big ask for parents for sure.”

So many were not so fortunate. With restaurants, wineries, and hotels closed, and later allowed to reopen under serious limitations, many in Napa and across the country faced a bleak future with little or no income.

“It was a really hard decision to make to let all of our staff go, but we told them we’d be applying for unemployment just like they are. There was a feeling that this is affecting all of us,” Napa Palisades Saloon co-owner Charlie Crebs said in March, shortly after the closure forced him to lay off about 30 staff members.

Some businesses bridled under the restrictions, insisting that the danger of coronavirus was eclipsed by the spectacular economic devastation the shutdown was having.

“We have no income coming in” from walk-in visitors, art gallery owner Quent Cordair said as he reopened his store in early May in defiance of county rules. “Every day that we are not open will make it harder for us to recover.”

County officials, however, took a dim view and quickly cracked down on the gallery and Napa’s Fumé Bistro & Bar, which pointedly and publicly operated for two nights in defiance of county orders. Napa’s Buttercream Bakery tried to remain open in a more under-the-radar basis, but health officials eventually caught up with them and ended indoor dining, which was banned at the time.

By summer, life had taken on a dull monotony. No BottleRock. No Town & Country Fair. No Fourth of July parade or concerts in the parks that normally define the summer in the Valley’s cities. The Napa Valley Vintners cancelled its flagship fundraiser Auction Napa Valley, saying it was unlikely ever to return in the form it had taken for three decades.

Toilet paper and flour had returned to the store shelves, and some restaurants had managed to reopen, first for take-out and later for limited outdoor dining as the state and county slowly loosened the rules.

Still, as cases and deaths mounted slowly in Napa County, so too did the business casualties. Redd Wood in Yountville. Miminashi in Napa. The pioneering wine country restaurant All Season’s Bistro in Calistoga.

“She succumbed to complications from the coronavirus,” owners Alex and Gayle Dierkhising wrote to faithful customers. “All Seasons was a member of the community from 1983 to present. She had a joyous, purposeful life and was so proud to be a part of Calistoga.”

Napa County’s iconic wine industry, meanwhile, was already battered by years of fire and smoke, a glut of grapes, and changing consumer tastes. The coronavirus aggravated those existing wounds, limiting or closing tasting rooms, cutting off revenue from restaurant and hotel accounts, and spreading cases among the critical farm workers.

“In my 41 years at V. Sattui Winery, I have never seen the industry as damaged and in jeopardy as it is now,” said Dario Sattui, owner of V. Sattui and Castello di Amorosa, in October.

Vintners asked the county to relax regulations on tasting rooms, already some of the most restrictive in the country, to ease the burden.

As summer ended, the pandemic lull was over. Against the advice of health officials, people gathered for Labor Day, tired of their social isolation, and cases came roaring back. Propelled by ill-advised Halloween gatherings and Thanksgiving travel, coronavirus reached new heights and spread to areas of the country formerly touched only lightly.

By early December, Napa County and other parts of the country were setting records nearly every day. In the middle of the month, the county had seen more than 4,200 cases and 24 deaths. The county eventually returned to tougher restrictions, limiting or shuttering businesses that had managed to survive the summer.

But against this grim news, a ray of hope. During the week of Dec. 14, the first doses of a promising vaccine began arriving in the field, promising an effectiveness of more than 90 percent. Several more vaccines with similar promise were not far behind in development.

The end of the coronavirus seemed tantalizingly close, yet frustrating distant: in a nation of more than 300 million, the first week of deliveries saw only 3 million doses in the hands of local officials. First priority went to front-line healthcare workers and residents of long-term care facilities, which had been hit particularly hard during the pandemic.

That means we face entering our second year of living with the virus: social distancing, working from home (if we have jobs at all), face masks, distance learning, restrictions on businesses, gatherings and live entertainment; and economic uncertainty.

State and local officials ended the year promising a better future, while pleading for patience. It might be mid-2021 until vaccines are widely available to the public.

“All I ask, folks, is know this — this is the third wave. We don’t expect a fourth,” Gov. Gavin Newsom said in early December. “Vaccines are on the way.”

CHECK OUT THE YEAR IN CARTOONS, THE ROBERTO TINOCO EDITION

No. 9: Redevelopment of downtown continues

No. 8: Protests come to Napa

No. 7: Coronavirus wipes out entertainment

No. 5: Year of challenges for wine industry

No. 4: Fires cause unprecedented destruction

No. 2: COVID shakes up community life

No.1: Coronavirus changes everything

No. 8 Story of 2020: A year of nationwide protests comes to Napa

The wave of anti-racism demonstrations inspired by the death of George Floyd left its mark in Napa, as elsewhere in the country.

Downtown Napa continued to redevelop in 2020, even amidst the pandemic.

Amid the highest local voter turnout in 60 years, Napa County voters decided Board of Supervisor and city council elections as well as a marijuana measure in Yountville.

The coronavirus and the Glass Fire head up the St. Helena Star's list of the top 10 news stories of 2020.

Beginning on Tuesday, Jan. 5, free COVID-19 testing days will take place on Tuesdays and Wednesdays at the Napa County Fairgrounds.

The event was the first in-person auction for the trade organization since the pandemic began. 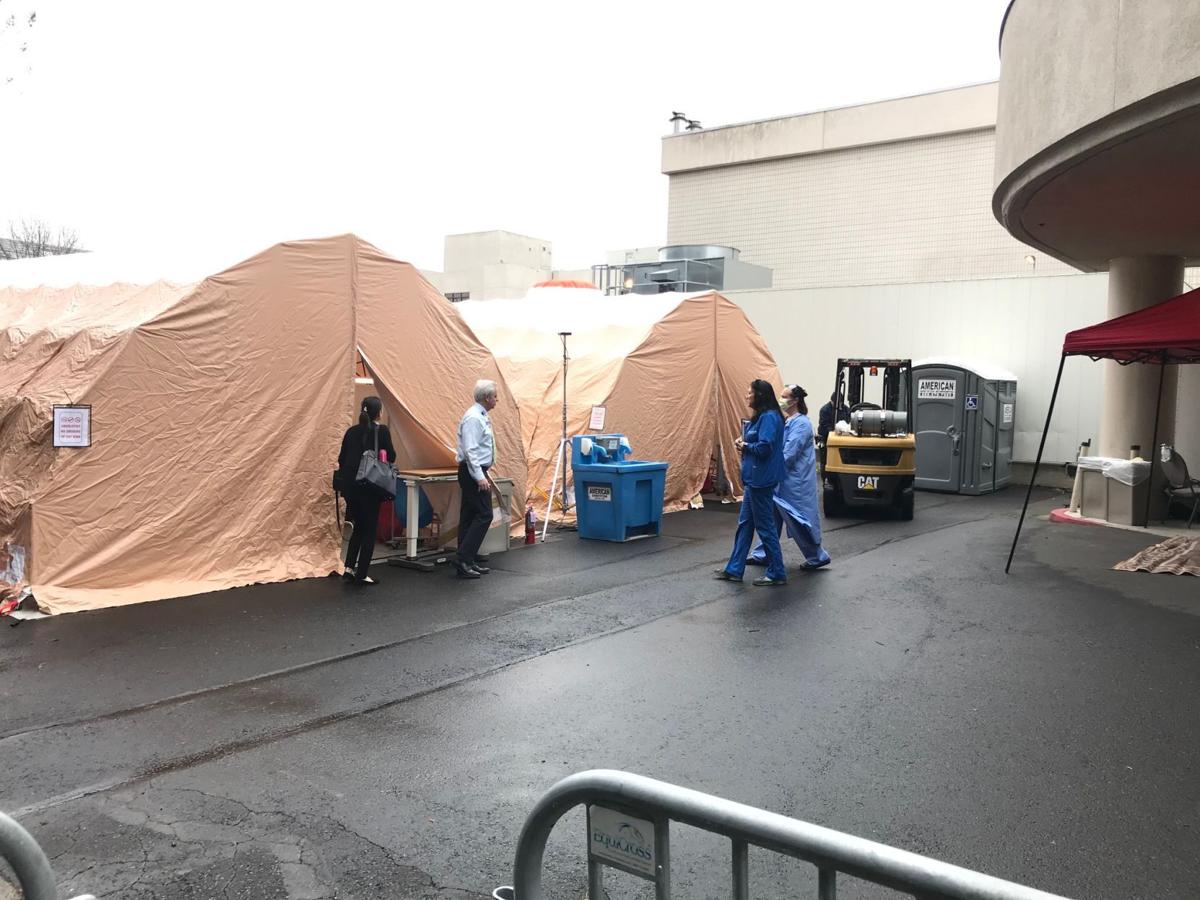 Tents meant to serve as a triage area for patients with COVID-like symptoms outside Queen of the Valley Medical Center in March. 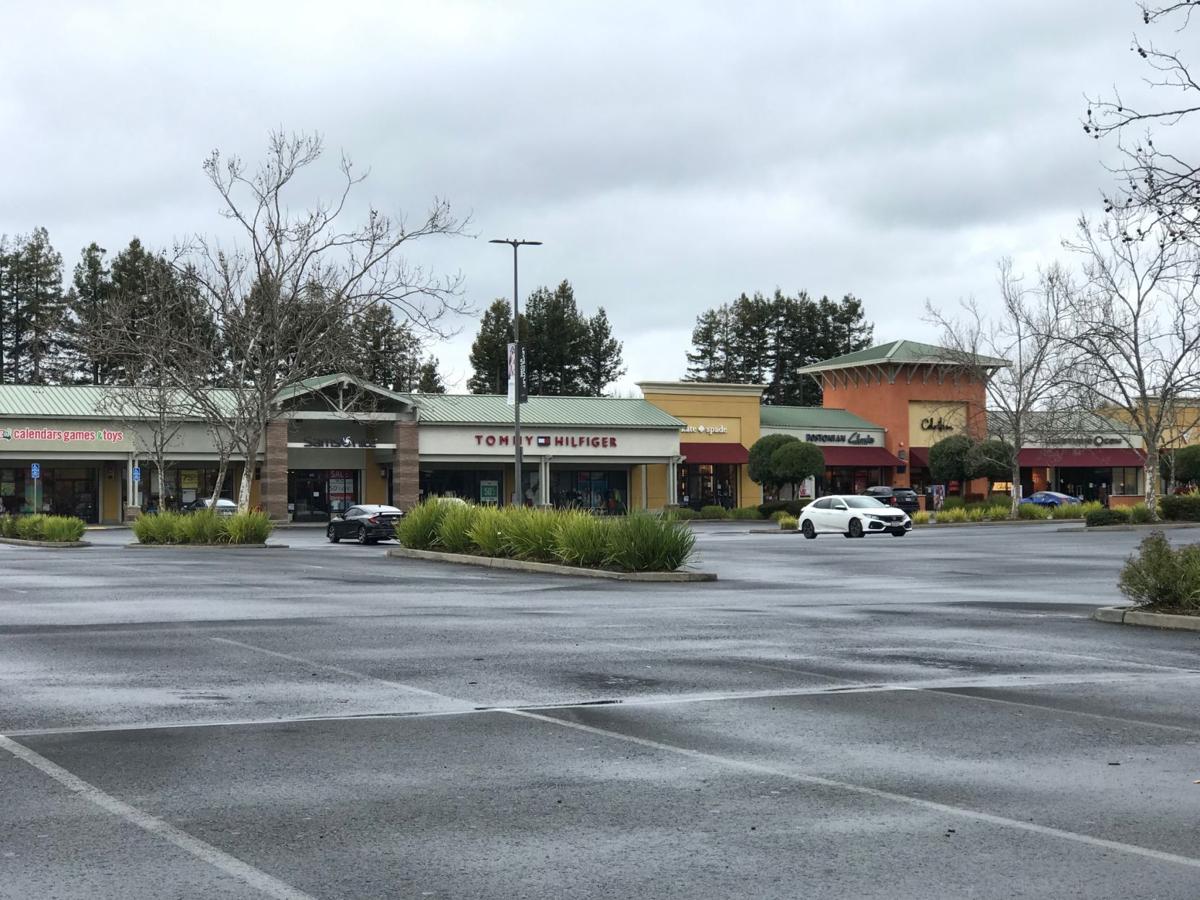 The parking lot at the Napa Premium Outlets was nearly empty on March 18, as most stores had closed as a result of coronavirus safety precautions. 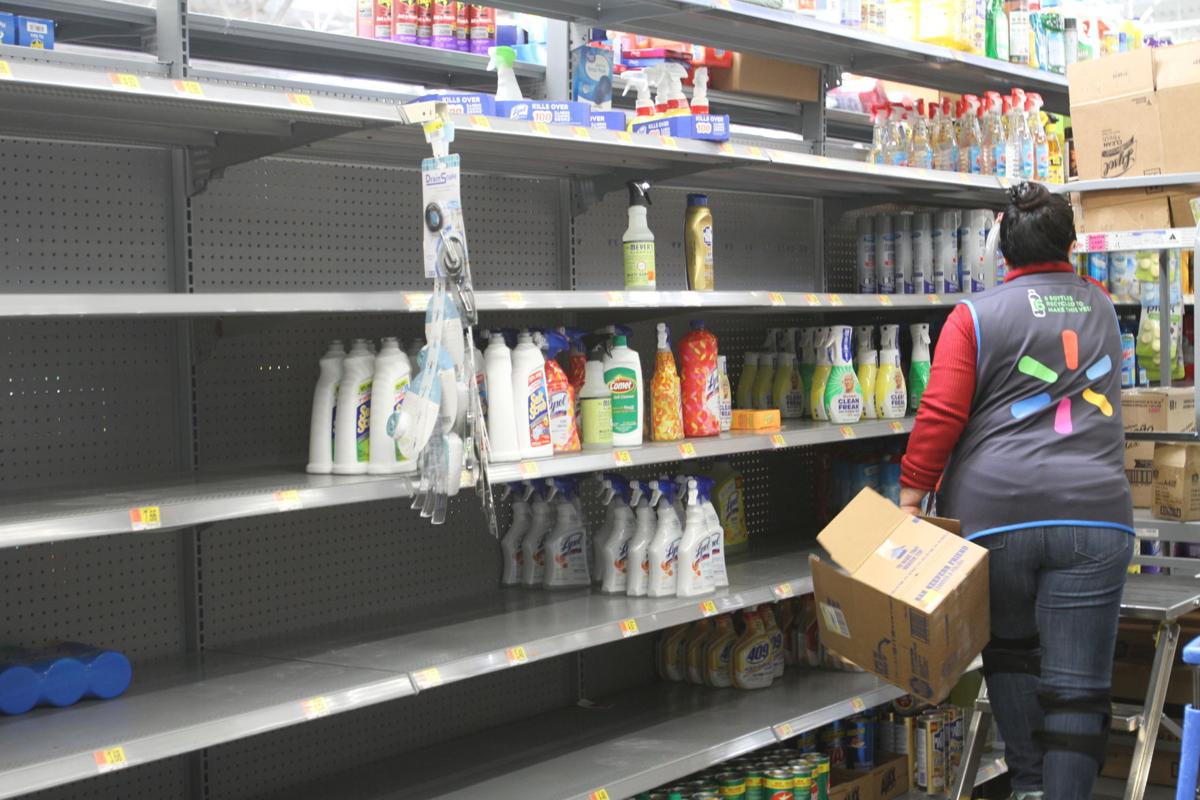 A Walmart employee restocks cleaning supplies next to empty shelves that once held sanitizers on March 2, after the first confirmed case of local transmission of COVID-19 in the U.S., in Solano County. 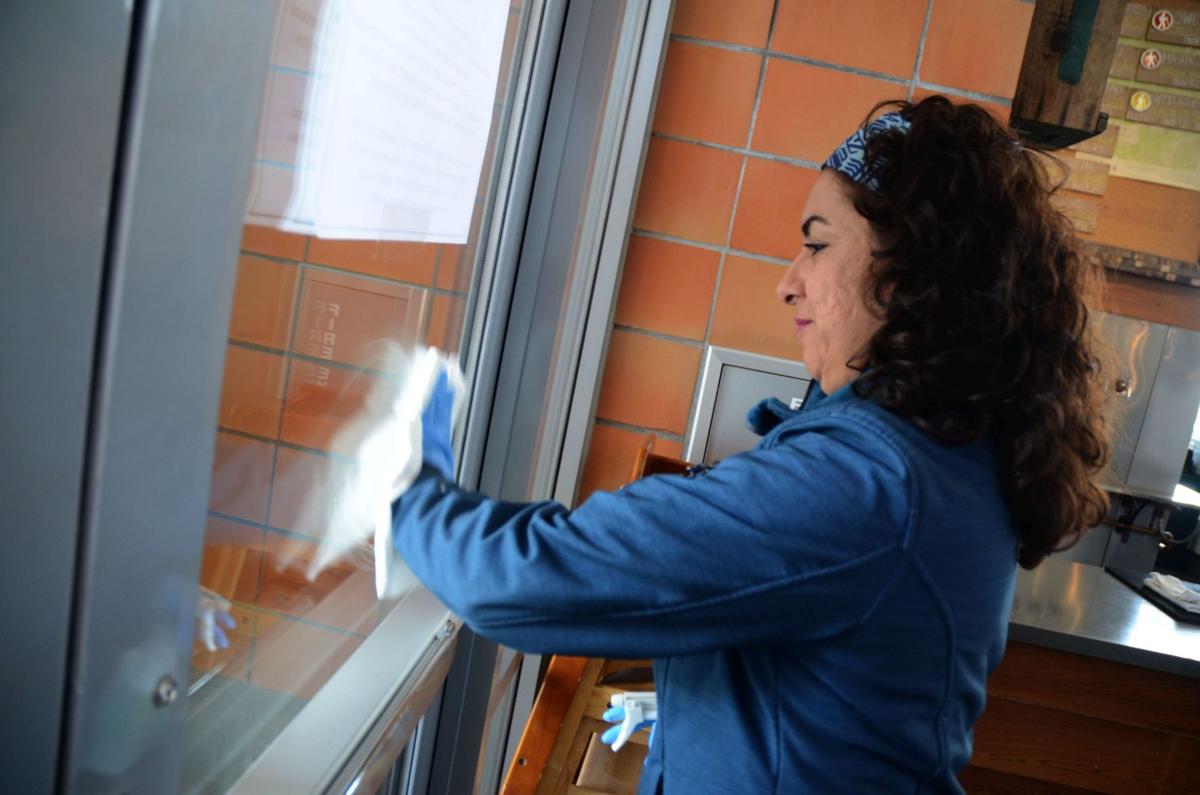 Oxbow Public Market worker Reyna Lopez wipes down a door after the hall stepped up sanitation procedures in response to the coronavirus. March 16. 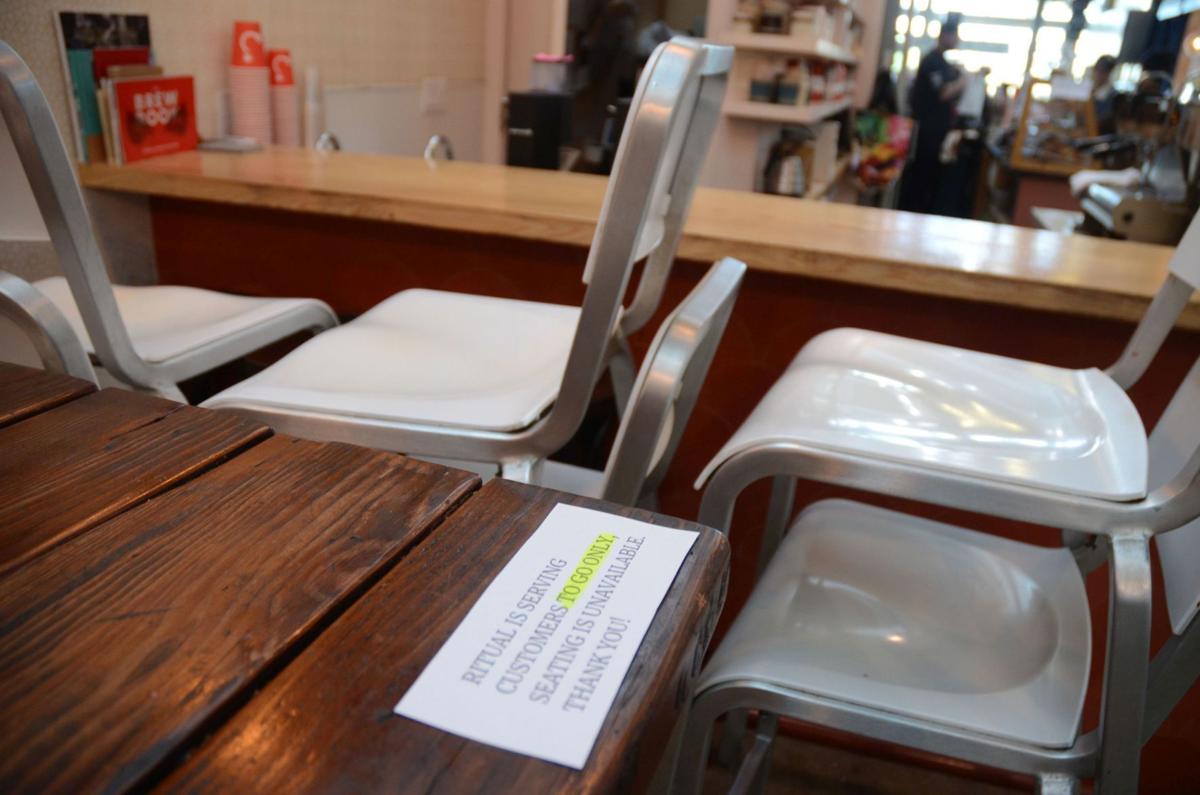 Many business in the Oxbow Market limited seating or closed outright in response to the coronavirus, Monday, March 16. 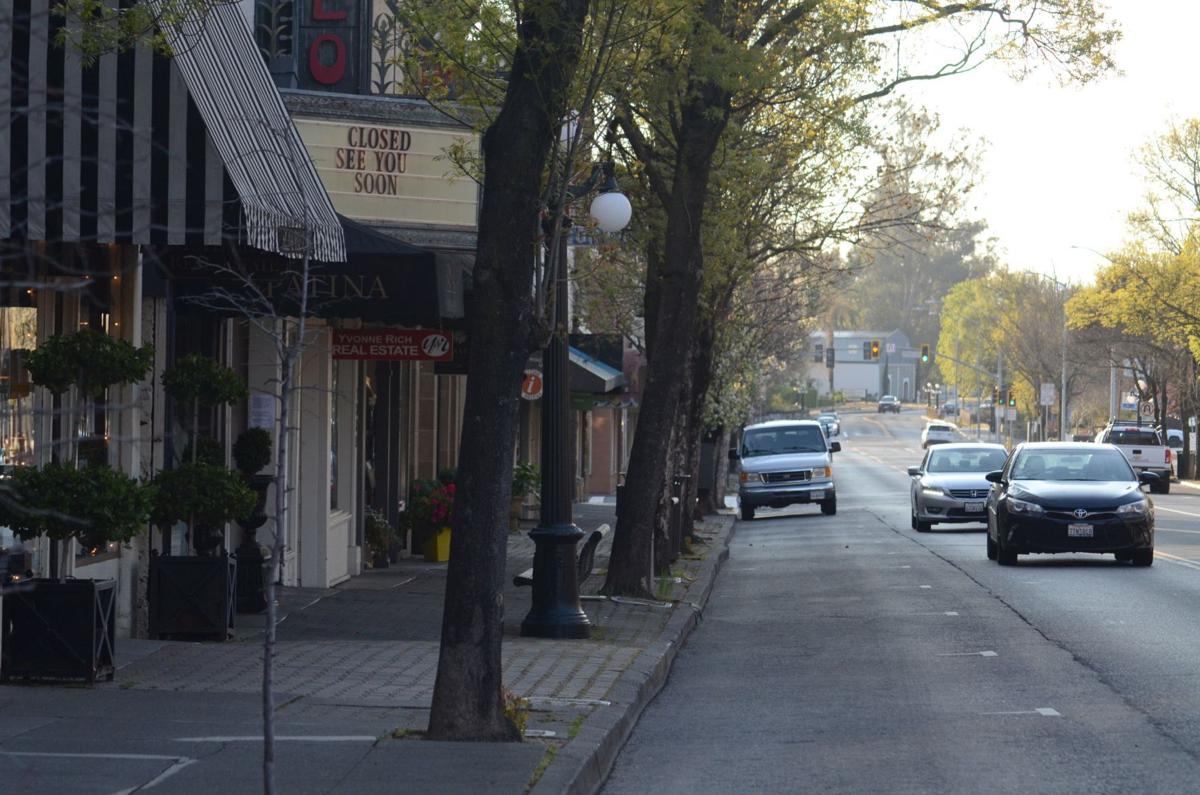 Traffic was light and almost all businesses in St. Helena were closed on Friday morning, March 20, the first day of the shelter in place order by Napa County officials and spread statewide by Gov. Newsom. 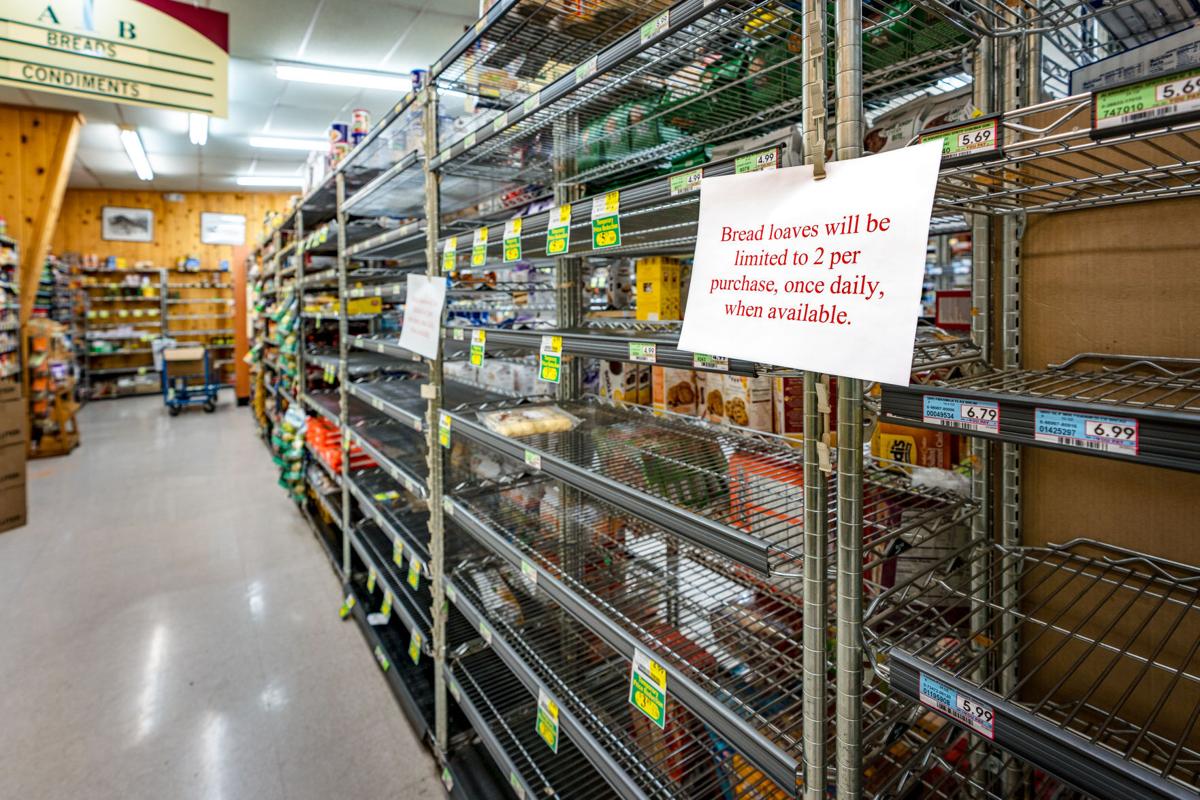 CalMart in Calistoga in late March, after the first stay-at-home order was issued.