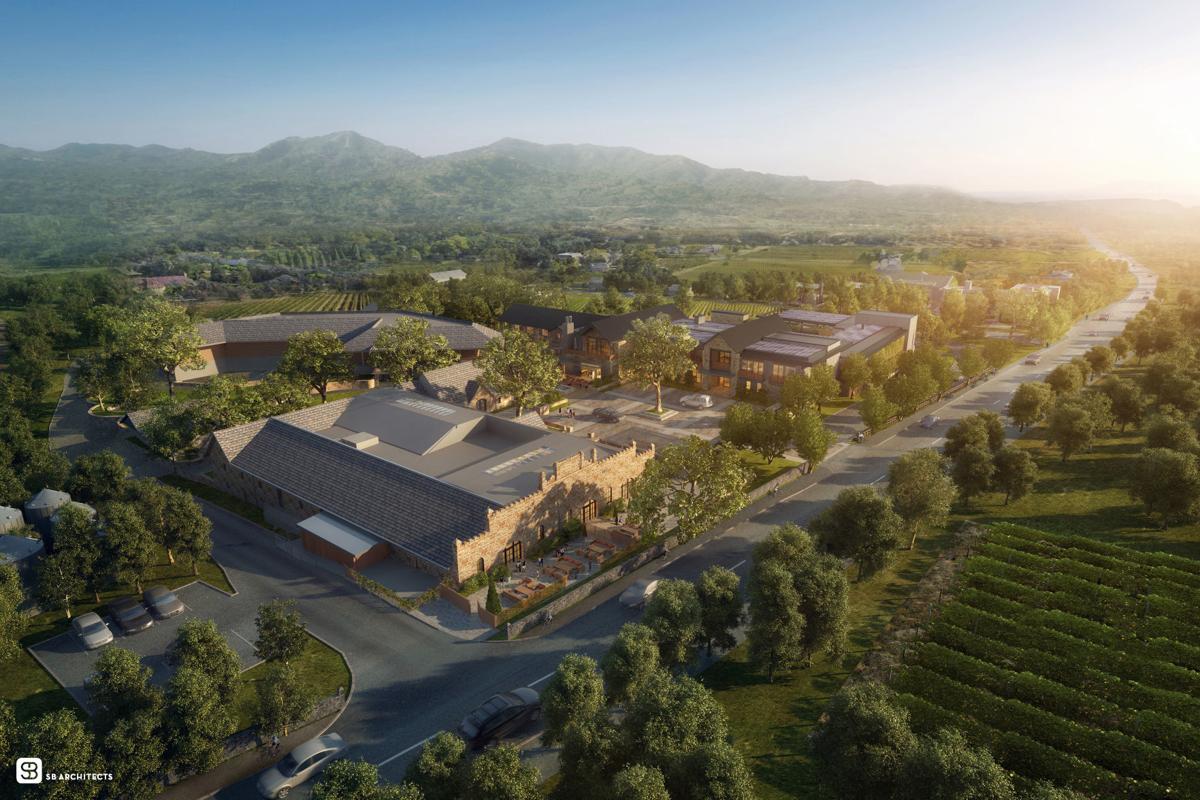 This aerial view depiction by SB Architects shows how the proposed The Inn at the Abbey northeast of St. Helena would look. In the foreground an existing Freemark winery stone building. An application for the project is on file with Napa County. 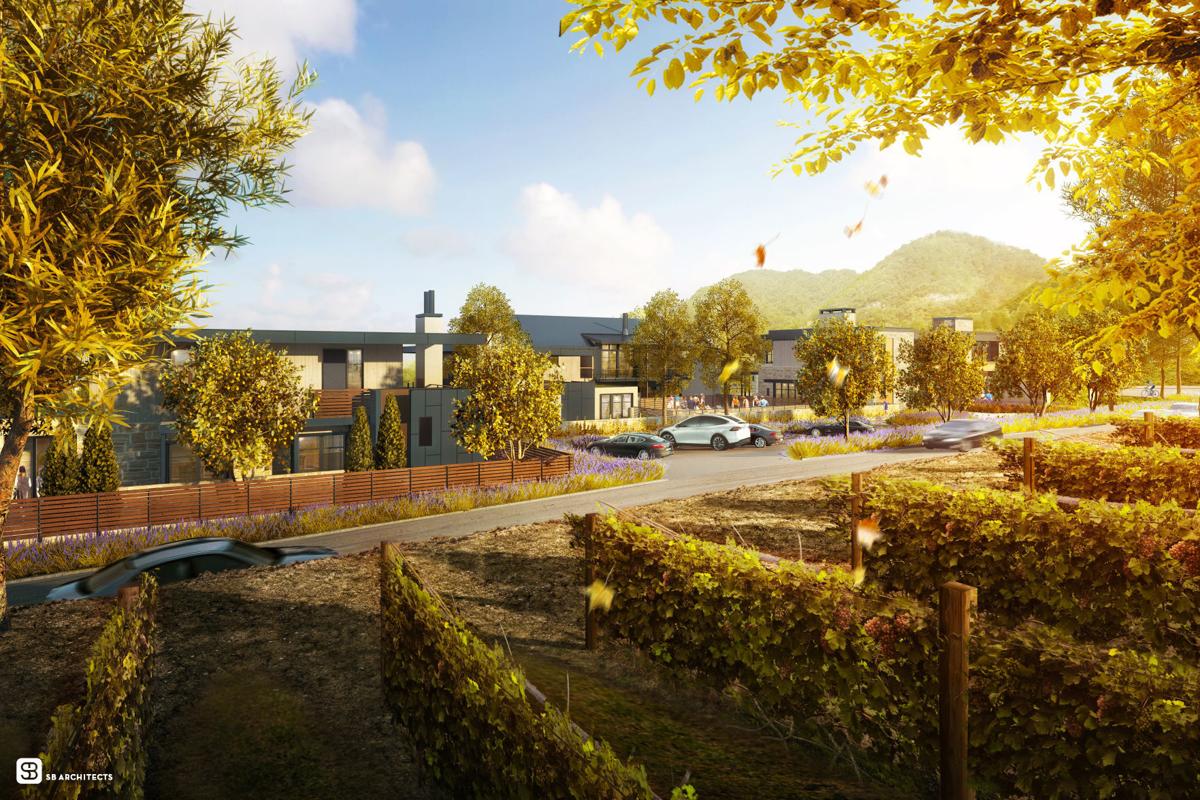 A depiction by SB Architects of the proposed The Inn at the Abbey near Freemark Abbey winery as viewed near Lodi Lane. 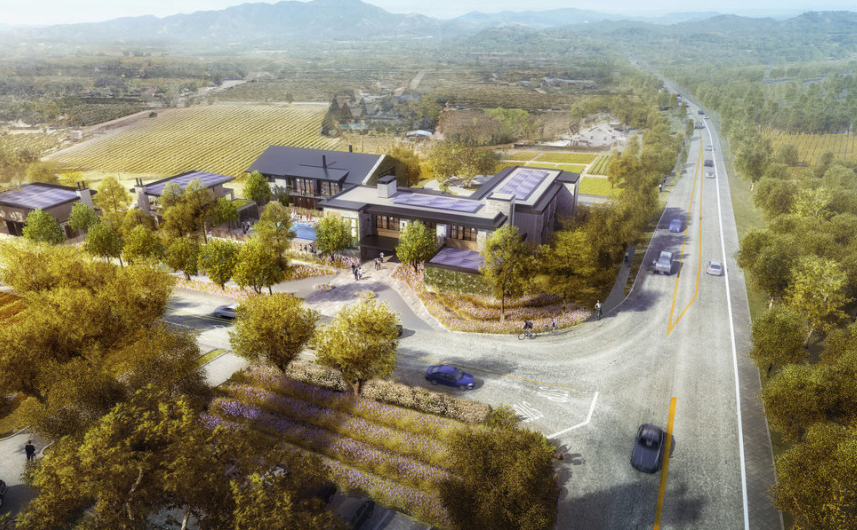 A depiction of the proposed The Inn at the Abbey by SB Architects. The hotel is to be near Freemont Abbey winery. An application is on file with Napa County, with no Planning Commission hearing date yet set.

Napa County seems to be wrapping up the Oak Knoll hotel project, but another rare hotel proposal for unincorporated Napa Valley is on the horizon – The Inn at the Abbey near St. Helena.

New, local hotels usually are built in the cities, given Napa County’s laws to preserve Napa Valley vineyards. But there are a few commercial pockets outside of cities where hotels can be built with county approval.

The county Planning Commission will once again discuss the Oak Knoll hotel proposed along Solano Avenue between the city of Napa and Yountville. It endorsed the project on Jan. 22 and is to hear more public testimony before taking the final votes.

Commissioners will meet at 9 a.m. Wednesday in the county administration building, 1195 Third St. for what could be the last Oak Knoll hotel hearing.

Oak Knoll hotel is to be located on 3.5 acres at 5091 Solano Ave. It is to have 50 rooms and a 100-seat restaurant. It would replace the vacant, boarded-up Red Hen buildings that are behind a chain link fence.

Vineyards stretch for acres in this area, with a few neighborhoods of rural homes. The Oak Knoll developers have said the vineyard views from hotel rooms will remind guests that today’s Napa Valley exists because of the county’s agricultural preserve law.

Planning Commission Chair Dave Whitmer at the commission’s Jan. 22 meeting said the commission wouldn’t consider a hotel in this agricultural area if the property wasn’t zoned commercial. But it is.

“The reality is, what we’re trying to do is figure out the best solution for this particular site that fits in with the neighborhood,” Whitmer said.

Much of the controversy that once surrounded the project seems to have been defused. Several rural neighbors at the Jan. 22 Planning Commission meeting said the developers have worked with them to address noise and other concerns.

Meanwhile, the proposed The Inn at the Abbey is targeted for commercially zoned property adjacent to Freemark Abbey winery northeast of St. Helena at Lodi Lane. No Planning Commission meeting has been scheduled as work continues on the application.

The Jackson family that owns Freemark Abbey winery submitted an application for the 79-room “boutique” hotel in January 2019.

Three buildings on a commercial property next to the winery would be torn down, including a five-room motel and the old A Dozen Vintners building. That would make room for the project.

Six buildings would be constructed for the hotel, ranging from bungalows to a south hotel “barn” building to a main structure. Building materials are to include rusticated stone and wood sidings, metal roofs and glass rails.

Included in the application is a spa, a pool, a parking garage, a valet court, a rooftop terrace and a fitness room. Go to the Napa County website at https://bit.ly/2vh6Ta5 to view the application.

The Jackson family has innattheabbey.com established its own website for The Inn at the Abbey.

“Our vision is to continue the beautification of underutilized, commercially zoned land by introducing a boutique inn celebrating the agricultural heritage of Napa Valley and the historic Freemark Abbey property,” the website said.

Project spokesperson LeeAnne Edwards on Friday said that “the idea is to play on that small, village concept.”

A 110-page draft traffic study by W-Trans said the Freemark Abbey site generates 366 daily trips. The proposed resort would generate 645 daily trips, for a total of 1,011.

That’s less than the site’s permitted 1,586 daily trips. The site has permitted uses for a second restaurant, a motel, a retail wine shop, an art gallery and commercial retail space that would be replaced by The Inn at the Abbey, the study said.

No traffic signal would be needed at Highway 29 and Lodi Lane because of the hotel, the study said.

Edwards said outreach is being done with neighbors.

“I think thus far folks seem to be pretty supportive,” Edwards said. “The property has been a commercial property for some time. There are some genuine concerns about noise and traffic we’re trying to address and are going to address.”

The Inn at the Abbey would create 50 jobs, the website said. Planning commissioners when looking at the Oak Knoll hotel expressed concern about where employees for that project would live, given high local housing costs.

Freemark Abbey dates back to the late 1800s. Its founder, Josephine Tychson, is known as the first woman winemaker in Napa Valley. The winery’s name comes from combining parts of the names of Charles Freeman, Mark Foster and Albert “Abbey” Ahern, who bought the winery in 1940, the application said.

The Freemark Abbey property since at least 1965 has had a blend of commercial and agricultural uses. For example, in the early 2000s, the property had two restaurants, the application said.

Today, Roadhouse 29 restaurant is located on the Freemark Abbey property, in the restored stone building that could also serve as the hotel’s guest lobby.

A 200-plus-page look at a proposed resort on the rural, former Red Hen site between Napa and Yountville finds no environmental hurdles that it…

Listen up, St. Helena. There’s talk of a new hotel in our midst, and we’re not talking about the Adams Street property.

County planners have permitted a major expansion to Chappellet winery.

The Napa County Planning Commission on Wednesday will discuss what should be considered in an environmental document for the proposed The Inn at the Abbey at the Freemark Abbey winery complex.

This aerial view depiction by SB Architects shows how the proposed The Inn at the Abbey northeast of St. Helena would look. In the foreground an existing Freemark winery stone building. An application for the project is on file with Napa County.

A depiction by SB Architects of the proposed The Inn at the Abbey near Freemark Abbey winery as viewed near Lodi Lane.

A depiction of the proposed The Inn at the Abbey by SB Architects. The hotel is to be near Freemont Abbey winery. An application is on file with Napa County, with no Planning Commission hearing date yet set.