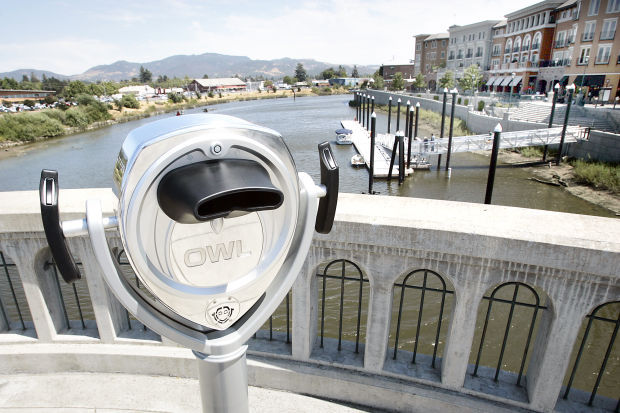 This Owl viewer on the Third Street bridge provides users with historical photographs of the Napa River waterfront. Hugh Linn, president of RSA+, is partnering with Aaron Selverston of Owlized to bring the interactive media viewer to downtown Napa for a trial run. Linn would eventually like to have six viewers throughout downtown. 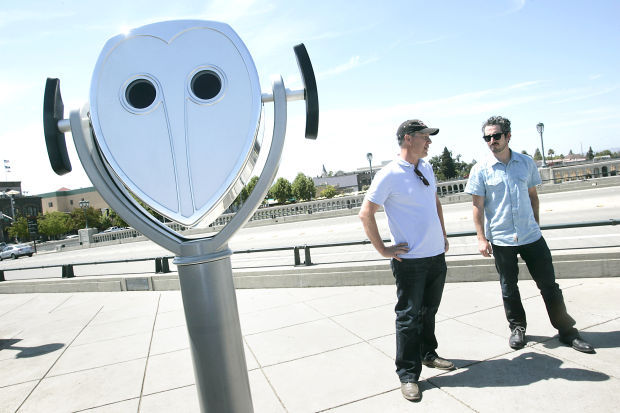 Hugh Linn, left, of RSA+ is partnering with Aaron Selverston of Owlized to bring an interactive media viewer to downtown Napa to teach people about Napa history. 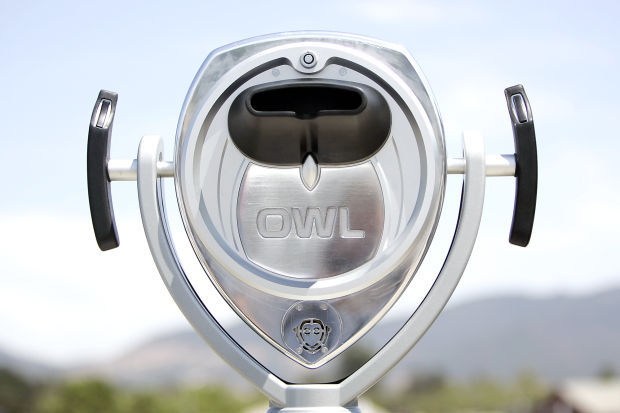 This interactive viewer shows pedestrians on the Third Street bridge how Napa's waterfront looked a century ago.

This Owl viewer on the Third Street bridge provides users with historical photographs of the Napa River waterfront. Hugh Linn, president of RSA+, is partnering with Aaron Selverston of Owlized to bring the interactive media viewer to downtown Napa for a trial run. Linn would eventually like to have six viewers throughout downtown.

Hugh Linn, left, of RSA+ is partnering with Aaron Selverston of Owlized to bring an interactive media viewer to downtown Napa to teach people about Napa history.

This interactive viewer shows pedestrians on the Third Street bridge how Napa's waterfront looked a century ago.

The Napa of the 1900s is usually seen only via vintage photographs in museums or history books. But local civil engineer Hugh Linn has helped create a new way to view old Napa, and at the very spot of such history.

Offering a “voyage back in time,” Linn, of RSA+, formerly Riechers Spence & Associates, has brought the Napa History Viewer to town. The viewer is made by a company called Owlized, and is described as a virtual reality viewing device that shows the future or history of a place.

The viewer, called the Owl, will be available daily until July 27 on the south side of the Third Street bridge between Main Street and Soscol Avenue. The Owl will be pointed south, overlooking what was once a bustling Napa River waterfront.

Users who stop to look through the digital viewfinder will see 270-degree historical views of the river circa 1900, when steamboats paddled up and down, brothels lined the dirt streets and goods traveled by horse-drawn wagon.

Using research from the Napa County Historical Society, three main views are highlighted via computerized images: The Zinfandel steamer, the Noyes lumberyard with a supply of redwood timbers and Uncle Sam’s Wine Cellar, one of dozens of merchants that set up shop along the waterfront.

“Our whole idea was to tell a story about Napa,” said Linn.

The viewer evokes the coin-operated binoculars commonly seen at tourist spots such as Fisherman’s Wharf or the Empire State Building. But unlike those magnifiers, this device relies on a motherboard and computer tablet to create the image seen by the user. Users control the images they see using buttons on each handle. The Owl is free to use.

“We’re bringing history to the street,” said Aaron Selverston, founder and CEO of Owlized. The Owl turns what would otherwise be a walk across a bridge “into an immersive experience that evokes the sense of discovery that we love about historical attractions,” he said.

Because it’s a temporary project, the viewer is not bolted to the bridge. Each night, around 7, it will be removed for safekeeping and then reinstalled at about 10 a.m. the next day. An intern from RSA+ will be on hand to assist if necessary and answer questions. A large poster will also help explain the demonstration.

While this is the first time an Owl has been installed in Napa, the device has been used to illustrate future projects in San Francisco. Linn had another idea for its use. “Why not show people what a community looked like in the past?” he said.

Valued at $40,000, the 50-pound prototype will be on display for only 10 days. The Owl will then go on to demonstrate other projects, including a new downtown vision for Fremont and high-speed bus lanes on Geary Street in San Francisco, said Selverston.

Linn said he expects 50 to 80 people to use the viewer each day. But there’s more to the project than just a glimpse into the past. An RSA+ intern will also survey viewers about taking an Owl-oriented walking tour of downtown. The responses will be used to gauge demand for five other Owl viewers spread around the city center, each aimed a different historical scene.

“We’re looking for sponsors” to determine the financial viability of such a project, said Linn. Advertising on the Owl device or within the view screen itself could also be incorporated, he said. The viewer has an Internet connection and could be used to make dinner reservations or other such arrangements.

“What we need is revenue” to implement the Owl project, he said.

Such sponsorships could range from $30,000 to $50,000 per station depending on how many are ordered and how elaborate the content is, said Linn.

Linn said RSA+ got involved in the project for several reasons.

“As an engineering company, we do a lot of development” of land use projects, said Linn. The Owl viewer is another mechanism that could be used to illustrate potential developments for RSA+ customers, he said.

But the company is also exploring research and development projects including technology like the Owl. “We’re not only all about engineering,” he said. It’s a natural expansion of his business, he said.

“Our business is directly tied to the success of downtown Napa. Anything that encourages development and renovation will result in more projects for us.”

The Owl viewer also includes audio narration about what the viewer is seeing. The speaker’s voice may sound familiar to some Napans. It belongs to Mike Basayne, a Napa County planning commissioner.

As for Linn, “I want people to say ‘That’s really cool,’” when using the Owl. “If that’s the feedback, we’ll push the project forward.”