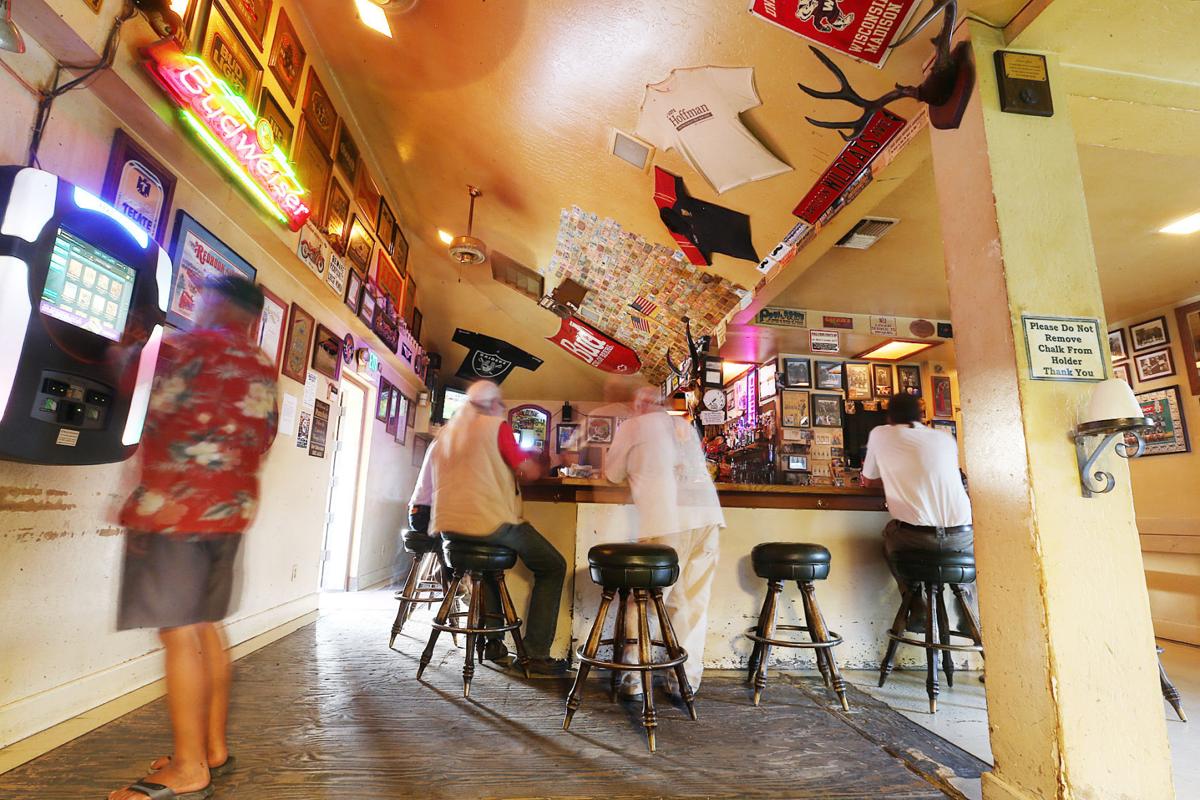 Patrons are a blur of motion at Pancha's in Yountville. 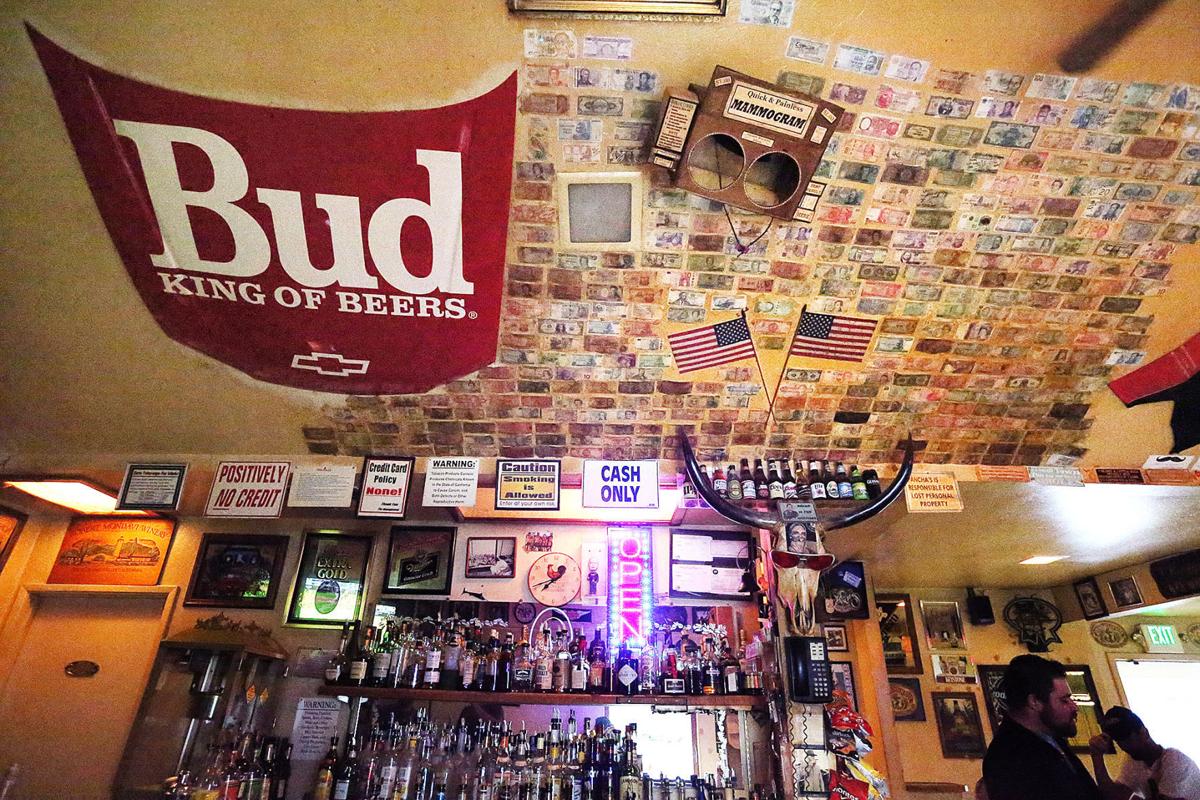 At Pancha's bar, the ceiling above the bar is decorated with currency from around the world. Pancha's has stayed the same as the town of Yountville has grown and changed around it.

YOUNTVILLE — Washington Street in Yountville is like Disneyland for foodies and wine fanatics. The small town of around 3,000 is filled with wine tasting rooms and Michelin-starred restaurants.

And then there is Pancha’s Bar. Amid the elegant stone, ivy-covered restaurants and tasting rooms is a ramshackle wood shack that does not even have a sign. It is the oldest business on Washington Street, and Yountville’s last remaining true dive bar.

From the beer signs on the tobacco-stained walls, to the gravel parking lot full of pickup trucks, to the fact that patrons are allowed to smoke inside, it stands as a living relic.

“This is the last of the last holdouts,” 68-year-old Yountville native and Pancha’s regular Russell Campbell said, sipping from a glass of brandy on the rocks. “When this place closes down, it’s going to be a sad thing.”

According to Rose Solis, who has tended bar at Pancha’s for the past 33 years, the bar has seen the town around it change while steadfastly clinging to its roots as a grassroots institution.

She remembers that at one time, Washington Street had a service station, small grocery store, hardware store, and several beer bars.

“I’m sure there’s a few people who want to get rid of us,” Rose Solis said. “But we get more people saying, ‘What would we do if Pancha’s closed down?'”

The longtime bartender said the bar has managed to hold on because her family owns the property, and the mortgage has long been paid off. Because Pancha’s is family-owned, and everyone who works at the bar is a family member, they get away with being politically incorrect: indoor smoking, and bartenders who are not afraid to curse out rude customers.

A sign on the wall says, “Welcome to Pancha’s, where the customer is always wrong.” Another says “Helen Waite is our credit manager. If you want credit, go to Helen Waite.”

Bobby Solis, 65, is Rose's nephew and the owner of Pancha's. He has lived in Yountville his entire life. When he was growing up, the town was mostly farmworkers. Like most Yountvillians of that time, the Solis family is of Mexican heritage.

“When I was a kid, there was no tourism here,” the Napa High graduate said of Yountville. “Some of the kids looked down their noses at us. This was ghetto.”

He remembers when the building that now holds Pancha’s was built, to be a beer bar and card room. He was 7 years old.

From the time he bought the bar for $110,000, Bobby Solis says that the town of Yountville has not liked it. Every bureaucratic process, from getting a license to serve hard liquor to getting permission to put a satellite dish on the roof was made hard for the Solis family. In the case of the satellite dish, they later learned that anything in the air is public domain. That was after they had removed it at their own expense, he said.

“I was run through the mill with the city,” Bobby Solis said while nursing a bottle of Corona and a cigarillo. “I had to sit by the city council and they talked down to me. I didn’t finish college, but I was an English major.”

Today, Pancha’s has an uneasy relationship with the rest of the town, but it attracts a steady stream of customers, including young service industry workers, veterans from the nearby Veterans Home of California, curious tourists, and the occasional rough character. Rose Solis is especially close to the veterans, whom she calls her “veteran family.”

“We get veterans, kids from the industry, tourists -- we get all kinds,” Rose Solis said. “I’ve been very fortunate by meeting some amazing people. There’s also a lot of lowlifes, don’t get me wrong.”

While Bobby Solis admits that Pancha’s is “the ugliest building in town,” the Solis family likely could not legally make any improvements to the bar without going out of business. Campbell said this is because they would also be forced to comply with updated building codes, which would easily break them.

Campbell estimated that the combination of the building and the land is worth about $3 million-5 million. “Someday, someone with 10 or $15 million is going to buy it,” he said.

While some old-time Yountville residents resent the gentrification of the town, the Solis family has taken it in stride. They still live in an old four-house homestead—except now, it happens to be next door to French Laundry.

“It used to be all beer bars,” Bobby Solis said. “Now it’s all winos.”

After initial cancellation, rally against racism and police brutality draws hundreds to Napa

Hundreds rallied against racial intolerance in Napa on Sunday following the death of George Floyd during an arrest by Minneapolis Police.

The incident began with a shooting at a Napa Starbucks.

A downtown Napa rally announced for Sunday afternoon to protest racism and police brutality in the wake of the death of George Floyd in Minneapolis has been canceled, according to an organizer and police.

The thief lead law enforcement on a high-speed chase through Napa County's backroads.

Police: American Canyon man arrested after trying to break into home with ax

A man was arrested Friday after using an ax to break down a neighbor's door, according to American Canyon Police.

The Napa rally stemming from the death of George Floyd drew about 300 protesters, according to police.

The automotive technology program at Vintage High School, the last in the district, will close.

Patrons are a blur of motion at Pancha's in Yountville.

At Pancha's bar, the ceiling above the bar is decorated with currency from around the world. Pancha's has stayed the same as the town of Yountville has grown and changed around it.