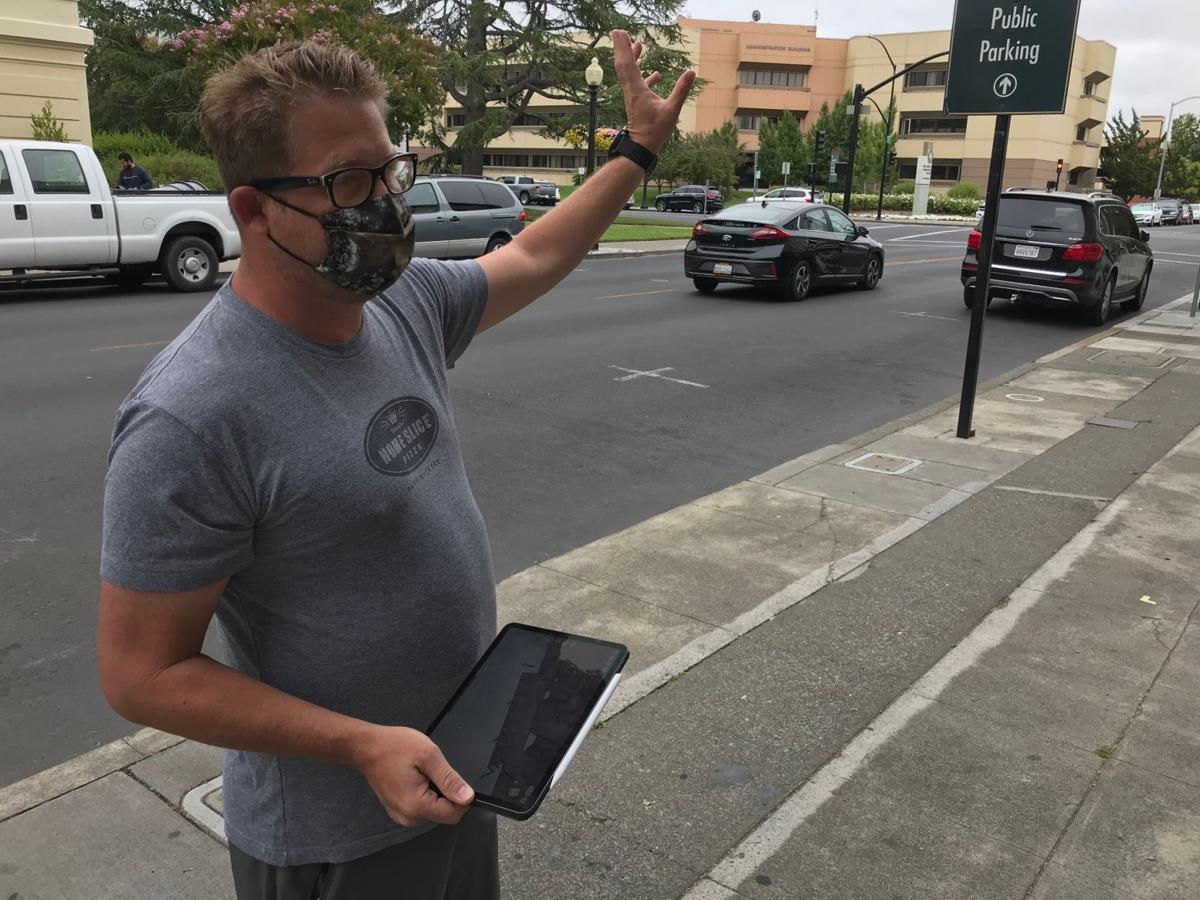 Curtis Di Fede of Miminashi hopes to create a parklet on the street outside his restaurant on Coombs Street. The city is offering $5,000 grants to create such outdoor areas. 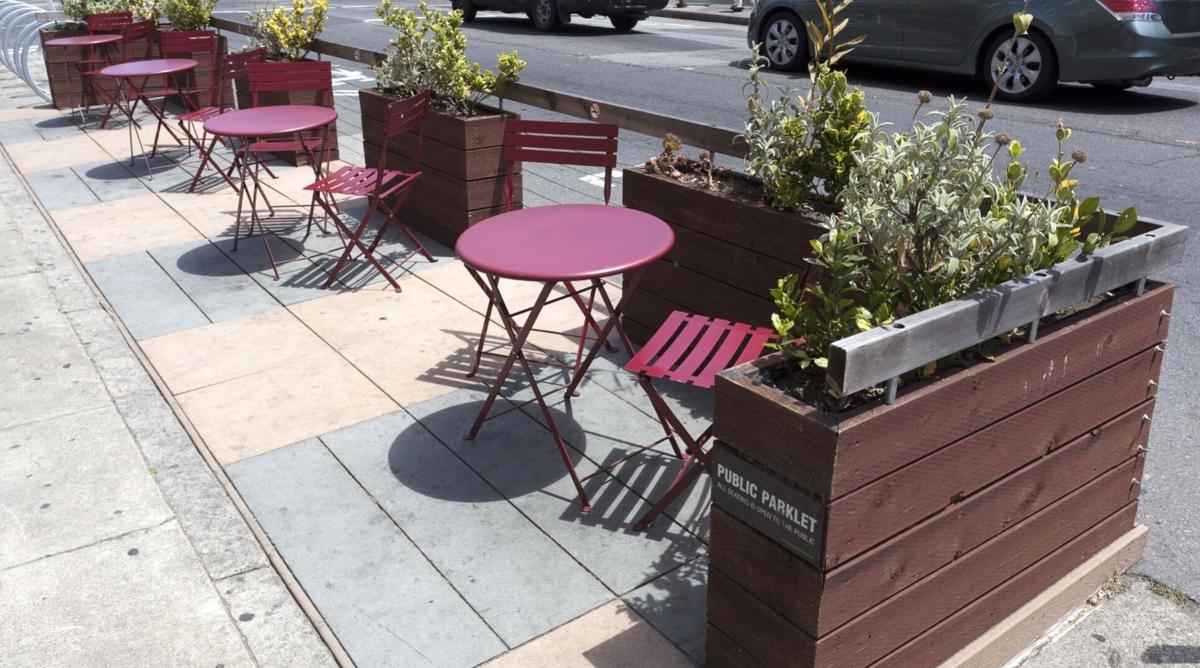 This stock photo shows an example of a parklet in another city. 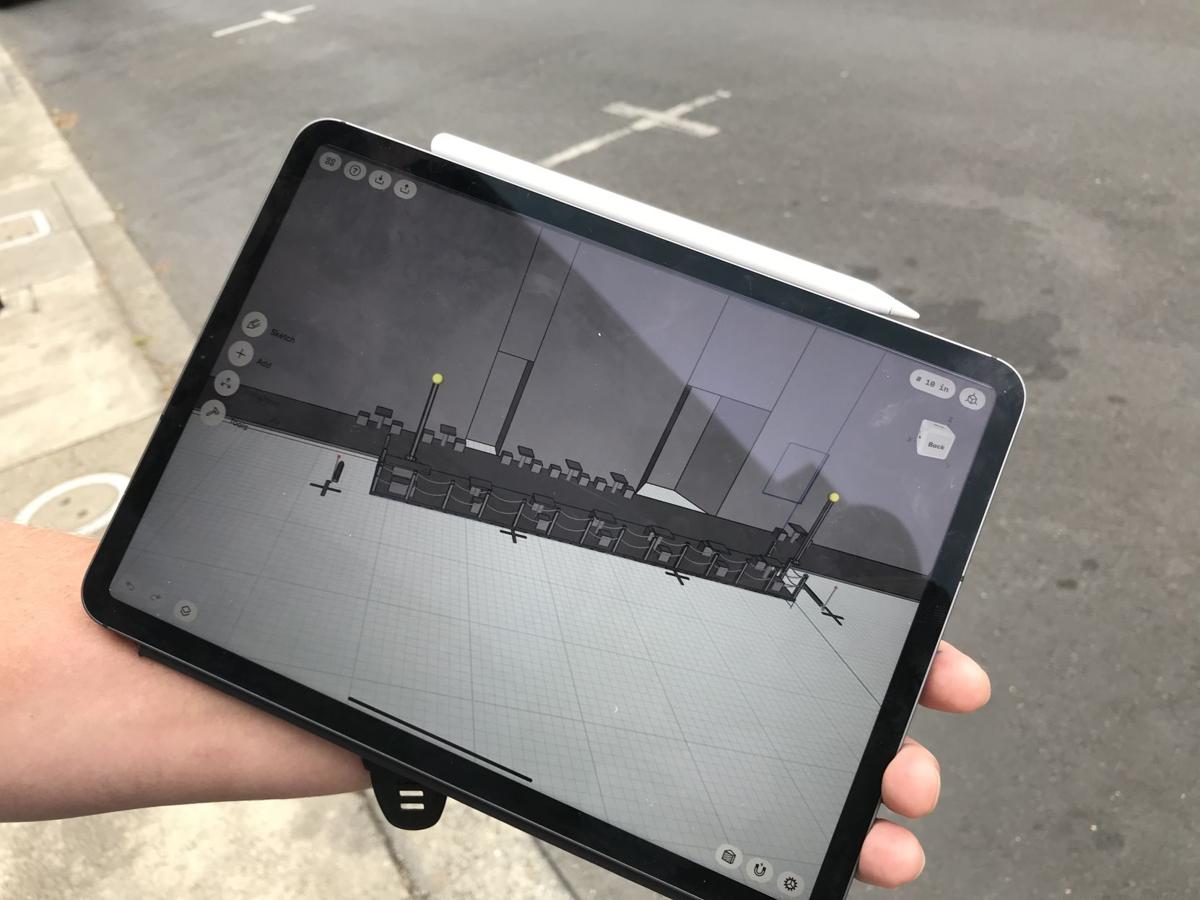 Curtis Di Fede of Miminashi designed a parklet that he hopes to build on the street outside his restaurant.

What do you get when you cross a parking spot with a mini park?

A parklet that could offer an economic boost to restaurants hit hard by public health restrictions on indoor dining during the COVID-19 pandemic.

The city of Napa recently announced a new program called Napa Al Fresco financed by property owners to create parklets throughout downtown. The program would expand seating for restaurants whose indoor dining has been closed, opened, then closed again as California tries to tame coronavirus spread.

So far, a number of downtown restaurant owners, including Miminashi, Norman Rose, Housley Napa Valley and The Dutch Door, have expressed interest in creating parklets outside their front doors.

“Most parklets have a distinctive design that incorporates seating, greenery, and/or bike racks and accommodate unmet demand for public space,” the association stated.

Downtown and Oxbow District businesses will be able to apply for reimbursable grants of up to $5,000 to help finance the cost of creating a parklet.

The goal is “to support our businesses during COVID-19 and provide a safe experience to people who visit and enjoy the city of Napa’s world-class dining and wines,” said a news release from the city.

The Napa Downtown Property and Business Improvement District (PBID) has allocated $140,000 to the Downtown and Oxbow Parklet Grants Program to support businesses with the design, development, and installation of a parklet or shared space. Property owners in the district assess themselves to finance downtown promotional activities.

On Tuesday, Curtis Di Fede of Miminashi on Coombs Street, said he was in the middle of working on drawings for a possible three-space parklet. “I’m trying to get it going ASAP,” he said.

Last week’s re-closure of inside dining impacts him “pretty significantly,” said Di Fede. “We can only do 10% of our dining right now, which is hard.”

“I just want Napa to be a much more modern city,” he said. “The cool part is the city of Napa has given me plans that Seattle and San Francisco are using, so I’m going off those plans.” He doesn’t have to re-create the wheel.

Having a cluster of parklets “is going to draw more attention to downtown Napa, which is great,” Di Fede said.

Di Fede said he plans to create an outdoor tiki lounge in front of his Japanese restaurant. “We’re going to offer Hawaiian fare food and tiki cocktails. I’m sure it will be reservation only for the time being because space is limited.”

Those three spaces can hopefully accommodate an extra 20 outdoor seats, in addition to the 18 he has now, he said.

Next-door neighbor The Dailey Method, a fitness studio, could also share the space for outdoor cycle classes, he said.

Michael Gyetvan of Norman Rose Tavern said he plans to apply for a parklet in front of his First Street restaurant.

“It’s just a matter of getting something on paper and finding someone to do it; most contractors are busy at this time,” he said.

Gyetvan said he can currently seat about 24 outside and with a parklet, he could possibly get maybe 12 to 16 more. “That would make a big difference,” he said.

At the same time, he’s not sure what to expect in terms of demand.

“We haven’t been having that big of a turnout to sit outside currently.” And he’s not sure how long the state ban on indoor dining will last.

As for the parklet itself, “I’m hoping it would be unique enough that people would want to come check it out,” seeing as there haven’t been parklets before in Napa.

Gyetvan said he’s hoping for a fast approval process from the city. “We really only have two more months of positive outdoor dining weather.”

The $5,000 grant is the only way he would have applied for the parklet, Gyetvan said. “I’m kind of banking on that.”

The restaurant owner said he’d like to have a parklet up and running by the first of August. “That’s my goal. It’s worth a shot.”

Adam Housley at Housley Napa Valley on Clinton Street said that parklets will contribute to “a cool vibe” in downtown Napa. “It just makes complete sense,” he said.

“So many cities have done a great job with it. For us it was a no-brainer. This will just improve the experience of our customers.”

He plans to design his parklet so it complements the area outside and around his business, “Like it’s meant to be there,” he said.

Housley hopes to share two spaces with a new tenant next to him, Big Stump Brewing Company of Sacramento.

The $5,000 grant is welcome, but he plans on spending “significantly more than that.”

“We’re going to make sure it’s done right,” he said.

Sponsoring the parklets is a smart idea by the city, said Housley. “The city should be pushing this kind of thing because we’re all trying to keep people employed.”

Mike Casey, co-owner of The Dutch Door, a take-out restaurant at First and Randolph streets, said he’s hoping to create a shared parklet space out of two adjacent parking spots.

“This is going to be critical to us surviving and what people are seeking now,” said Casey.

Casey said the business owners were “inspired by what we’ve seen other folks do in other cities,” such as San Francisco and Seattle, he said.

“The parklet will give some more space but also kind of more of an experience,” he said. He now has two outdoor tables. He hopes the parklet could provide an additional eight to 10 seats.

For the design, “We definitely want something more organic” that could possibly feature wood and plants. “We want people to feel like it’s a little oasis and look like it’s been there for a while.”

Restaurants don’t have to build a parklet to take advantage of the outdoor space around them. Businesses can also apply to create a “shared space” that can quickly transform parking spaces into expanded areas for their business.

“Parklets have the short-term benefit of adding some additional seating for restaurants and tasting rooms, which is desperately needed, and that alone makes them worthwhile,” said Craig Smith, executive director of the Downtown Napa Association.

“But from what I am hearing, businesses plan on creating some pretty elaborate parklets. I think these will become coveted seating long after the virus is over. Folks will be drawn to parklets because of the ambiance.”

A representative from the city could not be immediately reached to say how many parklets could be built in downtown Napa. For more information: cityofnapa.org/937/Napa-Al-Fresco

Napa County officials were uncertain Tuesday when businesses recently closed because of a rise in COVID-19 cases might reopen.

New categories of businesses will have to close again in Napa and 29 other California counties, the governor ordered Monday.

The city plans to replace the downtown sidewalks and street trees in 2021.

CALISTOGA — Looking for somewhere to sit and eat your take-out sandwich from Cal Mart or Palisades Deli? A place to take a break from shopping…

Faced with a number of vacant storefronts, the city of St. Helena recently released a Downtown Economic Strategy with 20 recommendations on ho…

The 26 new coronavirus cases are spread among people of all ages.

From internet rights to streeteries, how the pandemic is changing working from home

In an event co-hosted by CalMatters and the Milken Institute, policymakers and advocates explain where they see the state heading — and why California desperately needs to bridge its digital divide.

Parklets, usually see in big cities like San Francisco and Seattle, are coming to downtown Napa. Craig Smith has the details.

St. Helenans are taking to the streets -- and the vineyard paths -- to stay healthy and sane during the pandemic.

Mars’ liquid water lakes might not be liquid after all

Bolivia releases condor into the wild after being rescued by veterinarians

Bolivia releases condor into the wild after being rescued by veterinarians

Curtis Di Fede of Miminashi hopes to create a parklet on the street outside his restaurant on Coombs Street. The city is offering $5,000 grants to create such outdoor areas.

This stock photo shows an example of a parklet in another city.

Curtis Di Fede of Miminashi designed a parklet that he hopes to build on the street outside his restaurant.