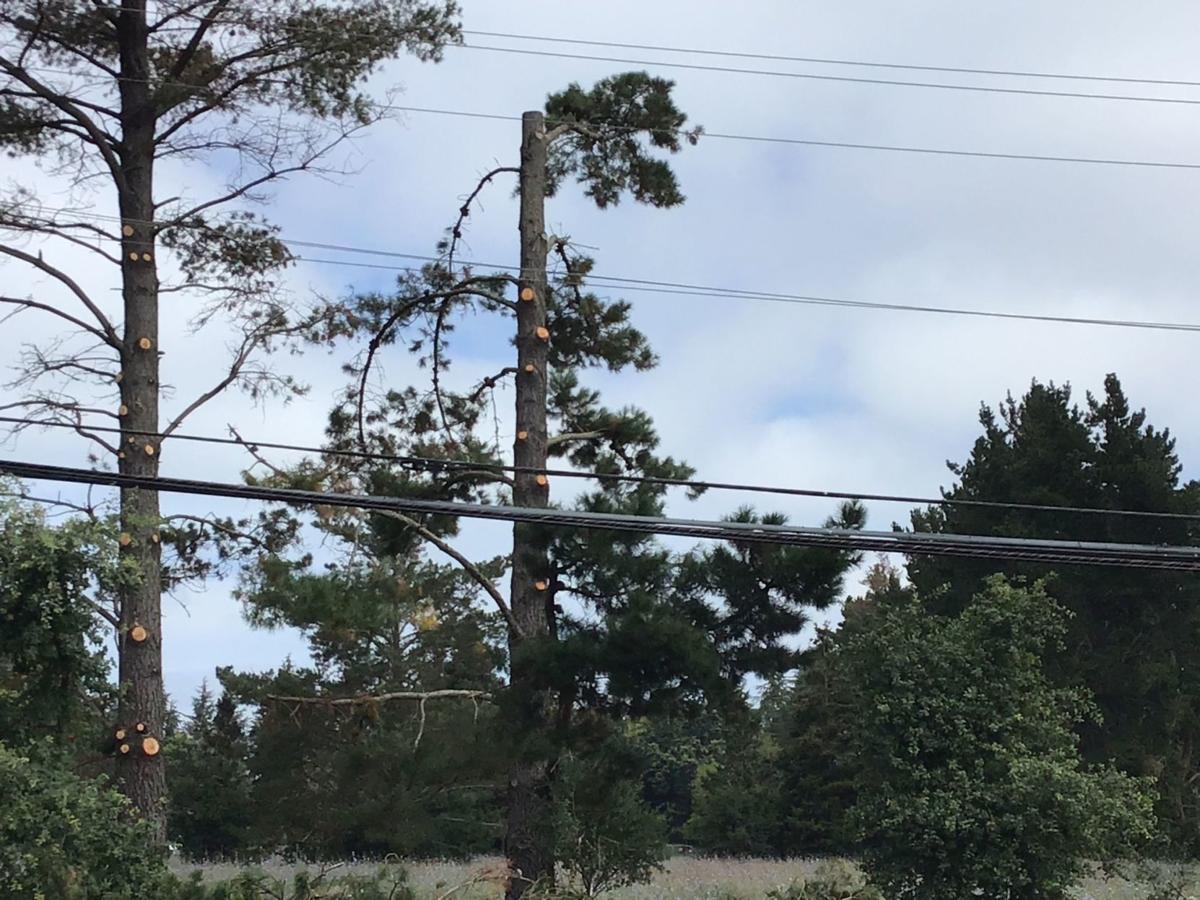 ST. HELENA — A few months ago, Beclee Wilson found five workers cutting down a tree behind her house north of St. Helena.

Hired by Pacific Gas & Electric, the crew had entered the Wilson property through a gate to an adjoining property, where the landowner had granted them permission to trim his trees. Beclee and her husband, John, had not.

She approached the foreman, who said he was from West Virginia.

“I told him there was a town named Beckley in West Virginia, just like my name. He said, ‘That’s where I’m from.’ I said, ‘Good, now go home,’” Wilson said.

She managed to shoo them away before they could cut down the entire tree. But the incident is echoed by other rural Upvalley residents who accuse out-of-state crews hired by PG&E of haphazardly trimming and removing trees, failing to implement erosion-control measures, and leaving behind trash and dead trimmings that will only add to the fuel load.

Deanna Contreras, spokesperson for PG&E, wrote, “PG&E takes all feedback about our work seriously. The safety of our customers and communities we serve is our most important responsibility. There are several opportunities for property owners to voice concern regarding our work.”

State Sen. Bill Dodd said he’s heard “valid complaints” about the quality of the work, but stressed that PG&E is under heavy pressure from the California Public Utilities Commission to comply with safety regulations intended to prevent catastrophic wildfires.

Dodd authored a new law, SB 247, requiring the state Wildfire Safety Division to inspect the vegetation management performed by PG&E and its subcontractors, instead of allowing PG&E to “self-certify” that the work has been done properly.

“There will be boots on the ground starting this year,” Dodd said.

Ken Stanton of Angwin said a crew cut down a bay tree in his yard last summer without any advance notification. It’s sprouting back up, but instead of a high canopy as before, the leaves are flush to the ground, where they could fuel a wildfire.

“In a lot of cases, they cut down the wrong trees and they leave the ones that should come out,” Stanton said.

In other cleared areas, Stanton fears that full sunlight and the lack of a shading canopy will cause chaparral and other brush to bounce back, creating a “race track” of wildfire fuel from Pope Valley to Angwin.

“They may have created a worse fire danger than they’re trying to eliminate,” Stanton said.

Norm Manzer said his Fawn Park Road neighborhood outside St. Helena has suffered from idle and inconsiderate laborers, erratic work, and a general lack of accountability.

Manzer said the workers leave behind candy wrappers, cigarette butts and other trash, as well as tree trimmings and other debris that could fuel a fire. Manzer pointed out to a supervisor that workers appeared to have hidden cuttings under some overgrown trees instead of chipping them. He said the supervisor assured him it would be cleaned up, but nothing ever happened.

“PG&E is not true to its word, and neither are its subcontractors,” Manzer said. “It’s a sad state of affairs.”

Manzer said out-of-state workers arrive as early as 6:15 a.m., hold meetings in the middle of the road that last two or three hours, and don’t seem to have much knowledge of which trees need to be removed, trimmed, or left alone.

Four trees on Manzer’s property were marked with a yellow triangle, which meant they would be cut down to the ground. When he asked a worker about them, he said they would only need to be trimmed as usual. Manzer eagerly painted over the yellow triangle, and the trees were saved.

Other times workers leave behind denuded areas prone to erosion, Manzer said. When he confronted a worker, he was told, “We’re not in the landscaping business.”

Kellie Anderson of Angwin has been raising alarms about PG&E’s vegetation management for months.

“There’s so little oversight of what these hundreds of workers are doing,” she said. Anderson has posted photos and videos of trees “skinned” and left to die, hillsides left susceptible to erosion, workers in fluorescent vests appearing to gamble on the ground behind Angwin’s College Market, and tracked equipment operating in sensitive riparian corridors like Conn Creek.

“These watercourses are marked, but when you actually talk to the guys with the chainsaws and the grapplers and the excavators, they’ll look you straight in the eye and tell you they don’t know what those flags mean,” Anderson said.

After she and other residents complained to the Department of Fish & Wildlife, straw wattles and hydromulch were deployed to prevent further damage. But complaints addressed to the subcontractors seem to fall on deaf ears, Anderson said.

“We’re completely powerless to assist in getting good, reasonable powerline clearing,” she said. “These subcontractors do what they want.”

“There’s a lot of stuff that’s just careless,” Beclee Wilson said as she surveyed a recently cleared hillside overlooking the driveway to her house. She was assured that flowers and other vegetation would be planted to stabilize the hillside, but she’s still worried about the risk of erosion.

“Other times they seem to be cutting things that show no sign of danger to the lines,” she said. “It just seems like a lack of knowledge.”

In a PG&E statement received last Monday evening, Contreras added, “The customer’s initial contact with the Vegetation Management Department begins with the inspector visiting the property to inspect for compliance.

“That’s when the inspector identifies the work needed to maintain compliance and public safety and writes the prescription, so to speak, for the tree trimmers. The customer is notified of the tree work to be performed.

“Then the tree trimmers, or line clearance contractors, visit the property to perform the work. We follow all state and federal guidelines when it comes to tree trimming. All inspectors are Line Clearance Qualified contractors – trained to work near power lines. PG&E has deemed these contractors qualified to work near our facilities from an approved list of vendors. Our tree contractors are held to the standards set by the American National Standards Institute for arboriculture and are continuously trained on property tree pruning techniques.

“We recommend property owners discuss debris and wood removal options with the inspector during the initial inspection and notification period. Or they can call 1-800-PGE-5000 if they have wood removal questions.

PG&E workers and contractors will resume tree work in Angwin and Deer Park on Monday, Jan. 6.

PG&E and its hired crews have cleared trees from my Spring Mountain property, and overall, they've done a good job.

Pacific, Gas & Electric will work on a 1930s-era gas line near Highway 29 over the next two years, bringing periodic bouts of traffic disruptions, dust and noise to western Napa Valley.

In order to be eligible for a wildfire insurance fund established by a state law last year, PG&E must have its plan approved by the CPUC as well as by a federal bankruptcy judge by June 30.

PG&E should fight its political battles only after it has hardened its power grid, buying new equipment and the burying and encasing of its high-tension power lines to make them virtually impervious to the environment.

Work is under way to sample soil gas at and around the PG&E Manufactured Gas Plant site along the Napa River, in preparation for cleaning up century-old pollution.