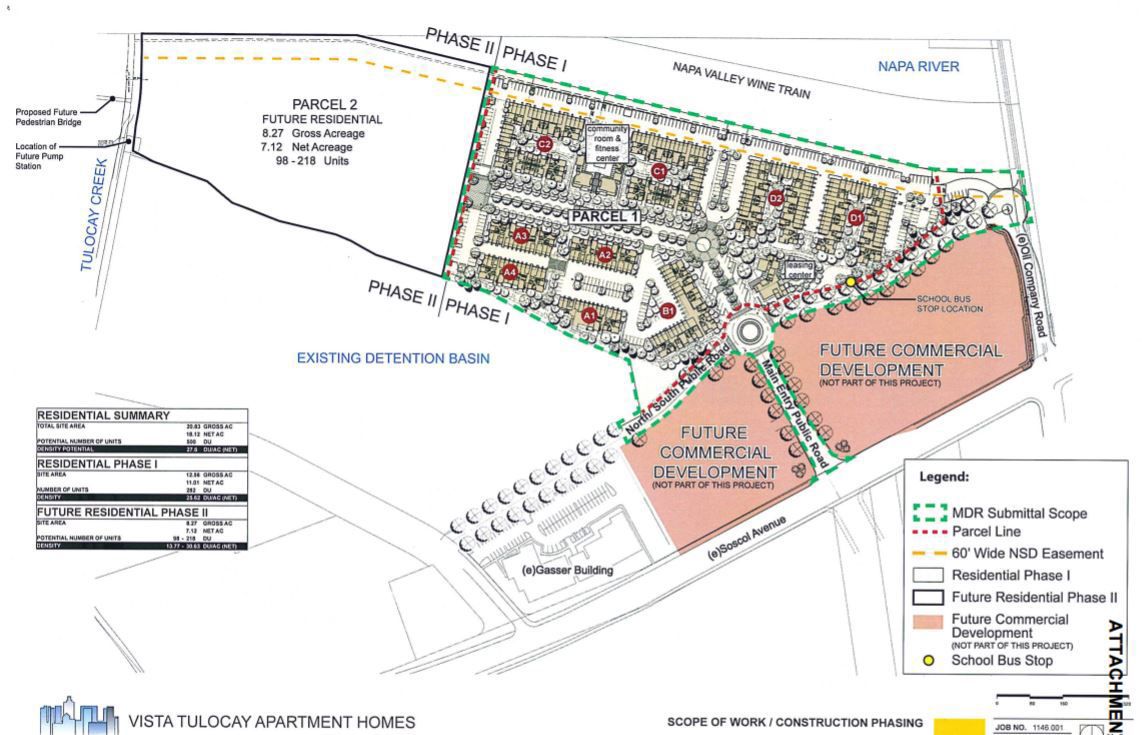 Vista Tulocay, a future development of more than 400 new apartment homes on Soscol Avenue, has been sold to a new owner for an estimated $34.25 million. 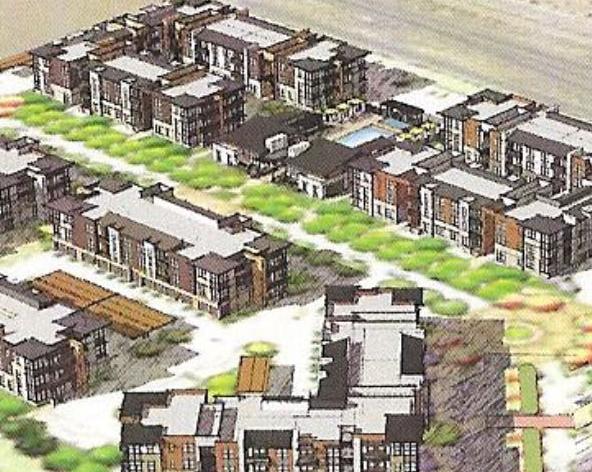 This view from the east shows the possible shape of the first phase of the Vista Tulocay Apartments, which would add 282 housing units to a 12-acre site west of Soscol Avenue in Napa.

Vista Tulocay, a future development of more than 400 new apartment homes behind Soscol Avenue’s Auto Row has been sold for an estimated $34.25 million.

The seller was BLT Enterprises of Santa Monica. The buyer is Fairfield Residential Company of San Diego, which hopes to begin construction this year.

“We are quite pleased with this opportunity and to be working in Napa,” said Brendan Hayes of Fairfield Residential Company.

The company views Vista Tulocay “as a great opportunity to meet housing demand by building a community that offers excellent walkability in a desirable area.”

According to Hayes, Napa is sought-after within the greater Bay Area with a limited housing supply.

The Vista Tulocay development was originally owned by the Gasser Foundation. The nonprofit is currently developing the front part of an adjacent large parcel into commercial and retail space next to Soscol.

The Gasser Foundation agreed to sell the Vista Tulocay site to BLT Enterprises for $9 million in 2002, but the sale did not close until 2013 because of flood control and entitlement delays.

“Fairfield is very well capitalized and they are very good at executing and building,” said Joe Fischer, a Gasser spokesman.

“We’re very excited that this group is going to take what took many years to design and entitle and have it come out of the ground,” providing housing for many people in the community, said Fischer.

Shawn Gutterson, vice president at BLT Enterprises, said the company decided to sell after being presented with “a unique opportunity that would allow the first phase (282 units) of the project to begin construction in the near future by a quality home builder and operator.”

The company chose Fairfield because its development team and “their commitment to quickly construct the first phase of the project,” said Gutterson.

This isn’t the end of BLT in Napa. Gutterson said the company is working with Plenary Group to create a proposal to develop the land around City Hall on First Street, including a residential housing component.

More housing is always a need in the city, said Lark Ferrell, housing manager for the city of Napa. “We need market rate and affordable units. Any additions are good news.”

“I’m excited to have the project move forward,” she said.

The city approved the Vista Tulocay project in 2016.

The rental homes form the first stage of what the Gasser Foundation envisions as a mixed residential and retail development straddling the gap between the river and the car dealers, strip malls and other businesses of Soscol Avenue.

Under the BLT plan, the project’s first phase is planned for 77 one-bedroom units and 186 two-bedroom dwelling, along with 11 three-bedroom apartments and eight three-bedroom townhouses.

Phase 1 of the project intended to fill the northern 12 ½ acres of the site, with up to 201 more homes possible in a second stage on the remaining property.

New street construction will bridge the gap between Soscol and the development site, which is west of the road and faces the Napa Valley Wine Train and the river on its west. Drivers using the main entrance will encounter a landscaped roundabout decorated with a water-tower structure.

For Vista Tulocay’s secondary entrance, a tree-lined north-south street is planned from the tip of Oil Company Road (which will be renamed as an extension of Sousa Lane) through the project, linking to a northward extension of Gasser Drive with a bridge spanning Tulocay Creek.

The company is preparing building plans and hopes to start construction by the end of the third quarter, said Hayes.

Out with the old and in with the new.

The future of a pair of projects promising to add hundreds of homes to Napa’s chronically tight supply will rest with the City Council.

A national developer has made an offer to buy a 10-acre parcel on Soscol Avenue listed for sale by Napa’s Gasser Foundation for $20 million.

A well-traveled Huether sculpture finds a permanent home in Napa

An aluminum and glass statue titled “Silver Twist” will become the artistic centerpiece of a new residential neighborhood on Soscol Avenue.

That big apartment complex rising east of Napa's Auto Row? Check out the amenities and rents.

Vista Tulocay, a future development of more than 400 new apartment homes on Soscol Avenue, has been sold to a new owner for an estimated $34.25 million.

This view from the east shows the possible shape of the first phase of the Vista Tulocay Apartments, which would add 282 housing units to a 12-acre site west of Soscol Avenue in Napa.