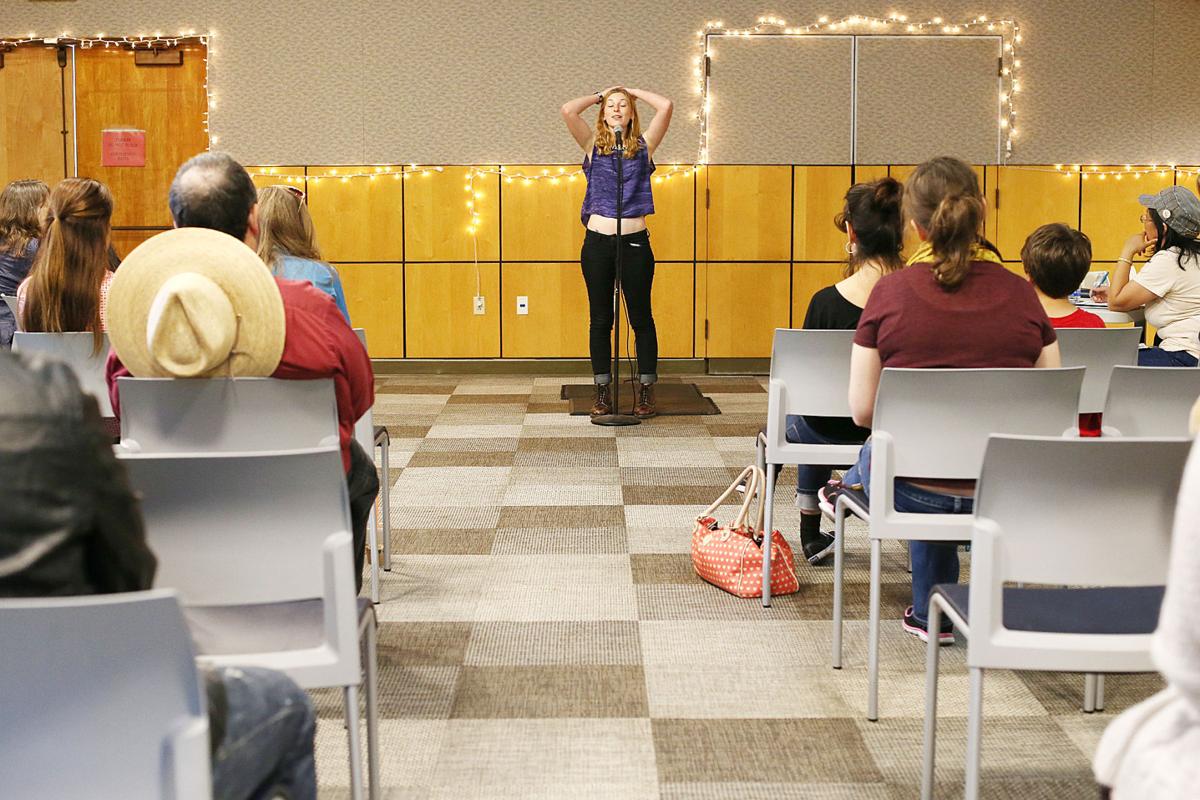 Maija Starr performs her poem "The First Amen-dment" during the teen poetry slam at the Napa County Library in Napa on Wednesday. Starr was awarded second place for her work. 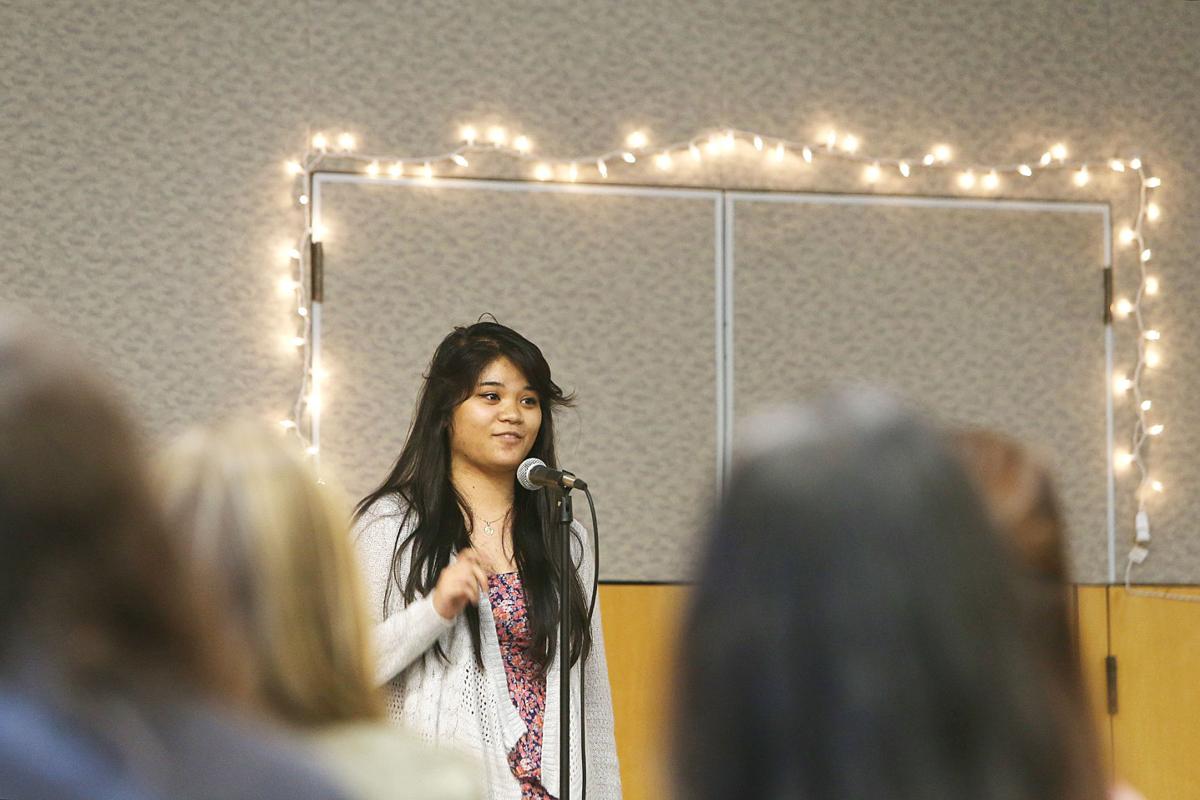 Ariana Golingo performs her poem "Sweater Weather" during the teen poetry slam at the Napa County Library in Napa Wednesday. Golingo was awarded first place for her performance. 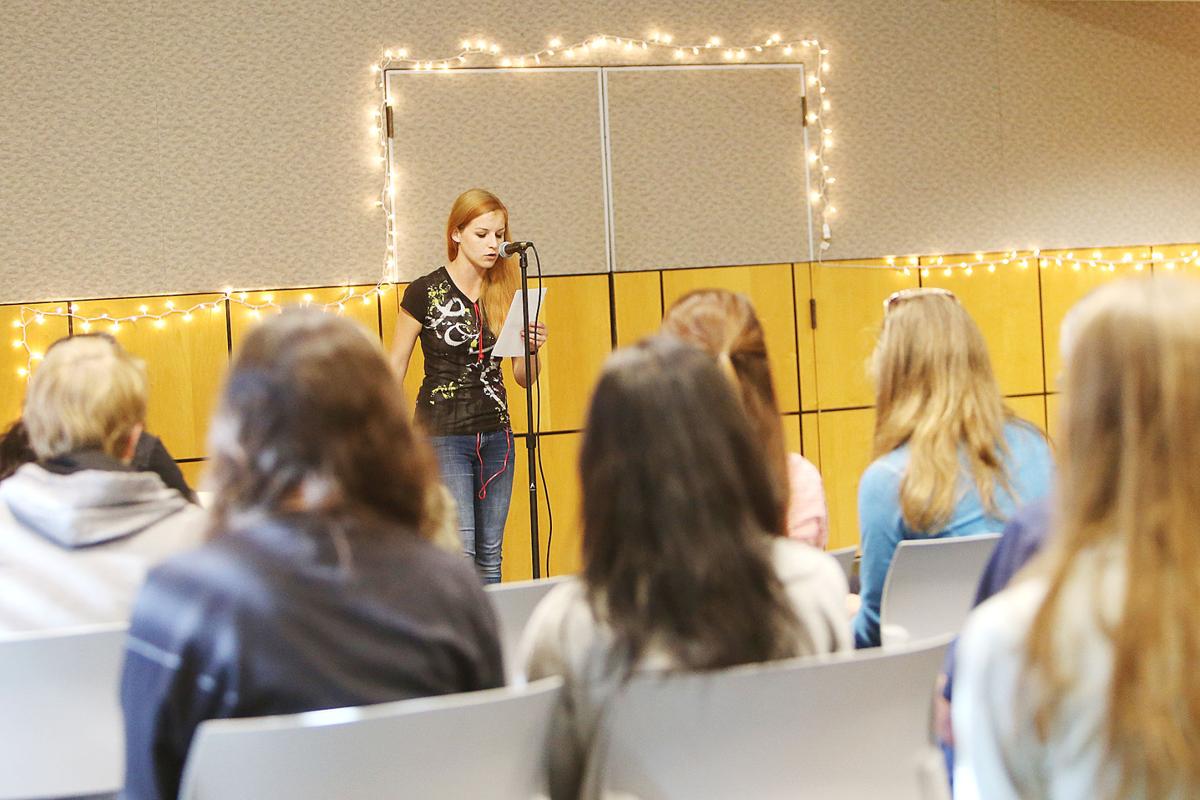 Mary Cate Cahill performs her poem "Follow Me" during the teen poetry slam at the Napa County Library. Cahill was awarded third place for her work.

Public speaking makes some people uneasy. Baring your soul can be even more intimidating, especially in front of strangers, but 15 brave, creative spirits unleashed their hopes, dreams and fears in poetic form as part of the Napa County Library’s Teen Poetry Slam.

“Teens were asking for a creative outlet to share their original works, so we decided to revive the poetry slam,” said library associate Ricah Quinto. “We wanted to give them a place where they could have a chance to share their truth and connect with other writers and young poets, share and be inspired.”

Each participant was given up to four minutes Wednesday afternoon to share their work with the audience and five judges: local poets Jeremy Benson, Kathleen Patterson, Eileen Tabios and Glynda Velasco, and Library Director Danis Kreimeier.

Slam Poetry focuses on performance. While the weight of the words is measured, the use of voice and body in the delivery were also taken into account by the judges.

Vintage High School junior Ariana Golingo impressed the judges and the crowd with her poem, “Sweater Weather,” which starts out as an ode to the bargain shopper but briskly transitions to draw comparisons between a favorite sweater you don’t want to get rid of and a relationship that’s equally difficult to part with.

Unlike most participants, Golingo had memorized her poem and breathed life into her words with pacing so precise the audience seemed to hang on her every word as her voice cooed, cried and vibrated with a vulnerability only accessed in the loss of a first love:

“I didn’t need a crop top, crew neck or button up because I had you to embrace me in all types of weather. I loved you. (pause) I loved you because no $17.99 limited edition vintage cardigan could replace the way I felt running my fingers across the sewing patterns of your sleeve or the way the careful material wrapped around my waist like a gentle lover. I loved you like my favorite sweater to keep my secrets – the ones I left hiding under the delicate pores of my skin and embedded in the seams of your threads. I wish for more than just a sweater.”

Golingo, 17, who won first prize, said she discovered slam poetry earlier this year and was inspired to give it a try.

“I love music, and you hear all the time that musicians and songwriters find inspiration in poetry, and that’s what I think slam poetry is about: it’s a song without the music,” she said. “It tells a story and it conveys emotion. The performer gives the poem its own rhythm. The performance is the song. The artist’s voice is the music to go with the words. It’s powerful.”

Love was a common theme in the performances. Yazmin Dominguez’s poem “Thank You” found the good in good-bye while Taylor Jaque’s performance personified the loneliness of a broken heart in “Torn Apart.”

But the teens also touched upon deeper topics, such as societal hypocrisy as described in Mary Cate Cahill’s “Follow Me.” Her fearless call to rise up against routine injustice earned her performance third place:

“The longer we fight, the world isn’t right, but we can save it if we try. Let’s not allow our world to die. For better or for worse, another verse, I won’t stand for segregation, degradation, the brainwash of an entire nation. Wake up, America! Stop snoozing the alarm.”

Paola Machuca discussed the challenges of holding on to her Hispanic heritage while maintaining the status quo of a first-generation American in “A Message to Chicanas” and Lizbeth Gonzalez compared getting a Social Security number to an invisible bar code that is more of a chain to society’s conventions than an identity in the aptly titled “Social Security.”

“You were a man, preaching hate by a kettle corn stand. Standing on a milk crate, megaphone in hand, in the city that prides itself in being corrupted by the deadly sin of open mindedness,” Starr called to the crowd, reciting her poem from memory, waving her arms to embody her angst.

“And I was a feminist, atheist, but culturally Jewish, bisexual, and you were a born-again, clean-shaven, cross-wielding evangelist (pause) in San Francisco, unaware of the rainbow flag flying quite literally over your head, unrelenting in the every aspect yet repenting on behalf of the very girl who asked if maybe there is more to life than what happens to your soul once you’re in a casket.”

Starr, a junior at Vintage High, said her poem was inspired by a recent trip to the City by the Bay. “I was with friends and we came upon this evangelist talking about how gays are an abomination and a stain on society, and I started talking to him. I wanted to have a dialogue, but he didn’t have an open mind. I wasn’t surprised, but it still really bothered me that I didn’t get what I’d wanted from that conversation, so I took that frustration, and this poem was the result.”

Starr said it felt good to share her work with an audience even though her moment in the spotlight felt more like a blur. “You practice, and you know what you want to say and how you want to say it, but once you’re up there, you get lost in the moment. It all just happens. That’s the art of it. Each time, the same words can take on a different feel depending on the place and the people you’re sharing it with.”

Quinto said she was encouraged by the turnout for the poetry slam revival and looks forward to hosting open mic nights on the third Wednesday of the month this summer.

“We’re going to open it up to all ages and all types of art,” Quinto said. “You can share poetry, sing a song, do a dance, spin a rhyme. The library is more than a place with books. We want people to recognize the library as a place to share ideas and express creativity.”

Can we celebrate freedom at this moment?

As Poet Laureate of Napa County, I had been asked to read a poem for Napa's "Salute to the USA" pre-fireworks presentation. While brainstormin…

Maija Starr performs her poem "The First Amen-dment" during the teen poetry slam at the Napa County Library in Napa on Wednesday. Starr was awarded second place for her work.

Ariana Golingo performs her poem "Sweater Weather" during the teen poetry slam at the Napa County Library in Napa Wednesday. Golingo was awarded first place for her performance.

Mary Cate Cahill performs her poem "Follow Me" during the teen poetry slam at the Napa County Library. Cahill was awarded third place for her work.