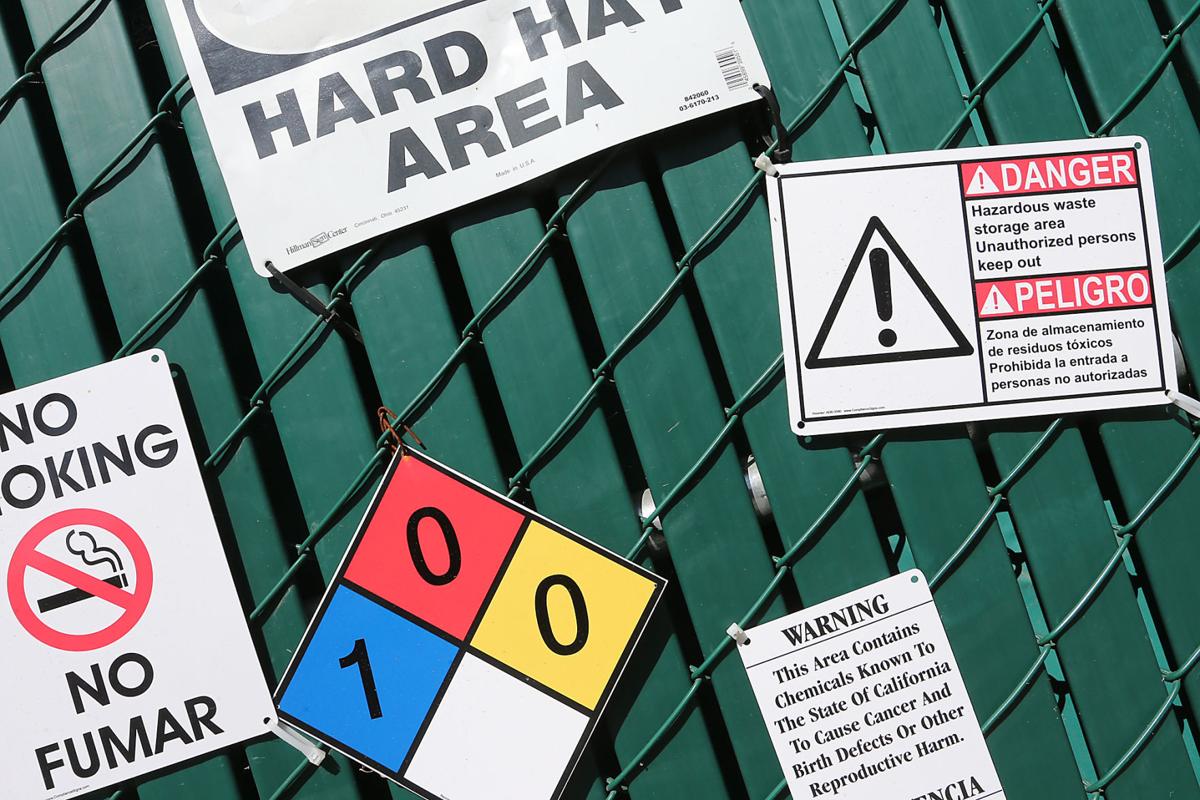 These are some of the warning signs posted at the lot at Elm Street and Riverside Drive, where an apartment complex was torn down five years ago due to industrial pollution from a former gas plant. Pacific Gas & Electric is working on a remediation plan. 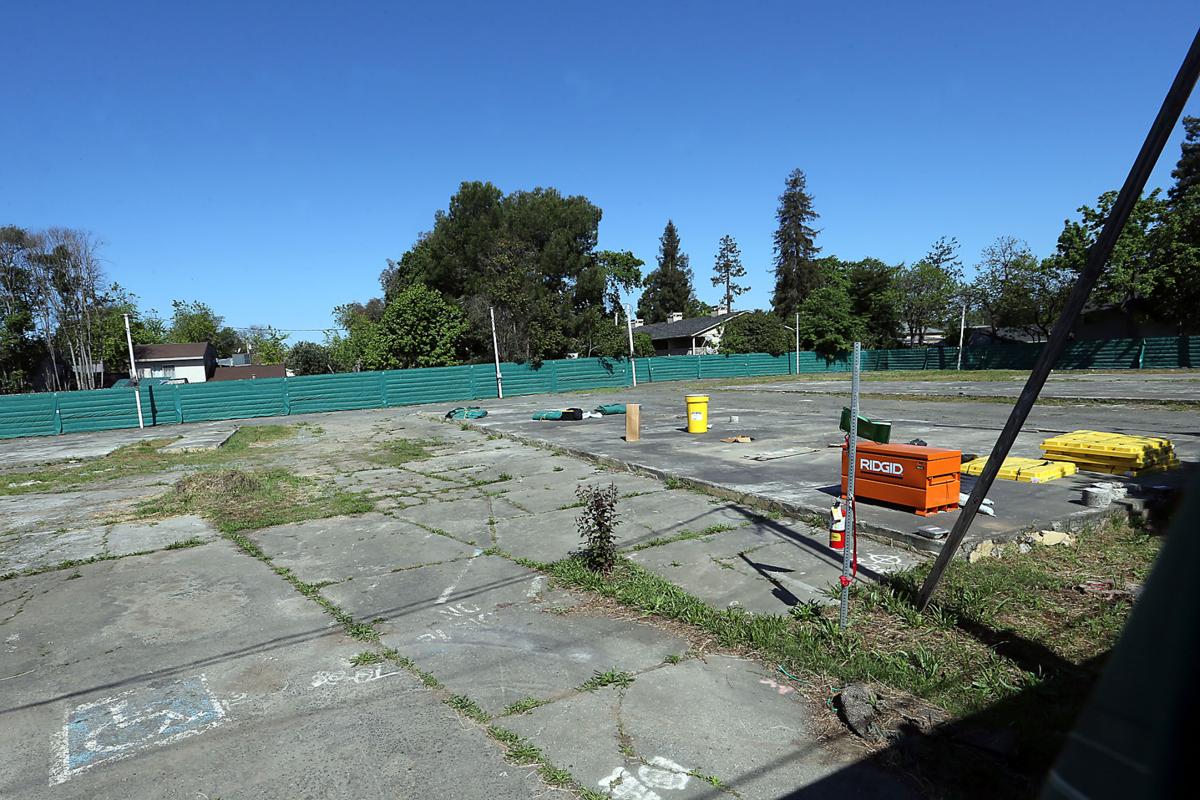 Five years ago, the apartment complex on this site at Riverside Drive and Elm Street was torn down because of pollution from the historic Napa City Light & Heat Co, which opened in 1888.

Century-old soil pollution that prompted the razing of a Napa apartment complex in 2011 might finally be removed in 2019 and the site made available for redevelopment by 2021.

Pacific Gas & Electric owns the now-vacant, 1.3-acre property on the 200 block of Riverside Drive along the Napa River south of downtown. It wants to cleanse the site of petroleum hydrocarbons, metals and other contaminates and sell it to a developer so apartments or townhouses can be constructed.

Out with pollutants and in with affordable housing – that’s the scenario that PG&E officials described to the Napa Sanitation District Board of Directors last week.

Mike Lee of PG&E said the utility is preparing a pollution remediation action plan that must be approved by the state Department of Toxic Substances Control. Hopefully, remediation can be done in 2019, he said.

The state must certify the completed cleanup effort before apartments can be built. David Harnish of PG&E said in a letter to Napa Sanitation District that this could take until 2021.

Napa Sanitation District agreed to continue waving a sewer hookup fee of about $360,000 that is the equivalent of the 40 apartments that were razed. But it decided PG&E must start paying annual sewer service charges that could total $80,000 over five years.

“That’s an incentive for them to finish as fast as possible,” District Director and county Supervisor Keith Caldwell said. “We still maintain the infrastructure in the ground.”

District Director of Administrative Services Jeff Tucker agreed Wednesday that the district has costs, even if no one is flushing toilets at the vacant property. Lateral lines in the ground still deteriorate.

Director Charles Gravett asked why cleanup is taking so long.

Lee explained that PG&E is under state Department of Toxic Substances Control oversight for the project. That leads to a back-and-forth as the state comments on the utility’s cleanup proposals.

Work to date has included such steps as installing groundwater monitoring wells and gas sampling probes. A November 2015 report describes pollutants as tarry materials with strong odors, “oily globs,” coal, slag and ash in the soils.

The saga started in 1888. Napa City Light & Heat Co. built a plant on Riverside Drive that could carbonize five tons of coal in five hours in retort kilns, creating gas to light the town of a few thousand residents. Later, the plant used petroleum as a gas source.

This plant in its original incarnation wasn’t industrial blight. Historic photographs show a brick building with arched doorways and windows. A visitor described beds of callas lilies around the circular gas storage tank and nearby trellises covered in purple wisteria.

T. R . Parker, a long-faced, balding man with a nearly trimmed mustache and beard, managed the operation in those early years. He won praise in a historic piece running in the January, 1911 edition of “Journal of Electricity, Power and Gas.”

“Coupled with mechanical excellence was the highest degree of cleanliness in a gas plant … everywhere, inside and outside the works, was evident the touch of Parker’s knowledge and good taste,” the article said.

Even so, the plant left behind a hidden, toxic legacy.

PG&E took ownership in 1905, closed the plant in 1924 and sold the land in 1961. The Riverside Apartments were built a few years later.

But a 1980 Environmental Protection Agency report said toxic residues might remain at the more than 1,500 former manufactured gas plants across the nation. A 1992 study of the Riverside Drive site revealed high hydrocarbon concentrations in the soil.

PG&E brought the Riverside Apartments in 2010 to study the toxic pollution there, the utility said. It relocated the tenants in 2010, giving each family $22,250 to help find a new home, and demolished the buildings.

Today, the site sits behind a fence to keep people away. A number of hazard signs warn any potential fence-hoppers to think twice.

The Riverside Drive site isn’t the only place in Napa that once had a manufactured gas plant. Napa Gas Works constructed the original plant in 1867 a few blocks away on 5th Street between Brown and Main streets.

Napa Mill Development Co. today uses the site as a parking lot for nearby hotel and shops. Asphalt and foundations serve as a cap to protect against the toxic materials below, according to Department of Toxic Substances Control documents.

Napa Mill Development Co. must perform annual inspections and submit the results to the state.

“There are no cracks in the asphalt cap,” the 2015 inspection said. “All earlier cracks, some caused by the 2014 earthquake, have been repaired and resealed on a regular basis.”

St. Helena had a gasification plant on Mitchell Drive from 1883 to 1930 to turn coal and crude oil into gas. PG&E has excavated polluted soils from the site and imported clean fill. Groundwater monitoring continues, according to state Department of Toxic Substances Control reports.

The city has considered buying the site for a parking lot.

The details are in: Napa's Costco will be 154,000 square feet, with the usual offerings.

Intoxicated pedestrian struck by vehicle while crossing Highway 29 in Napa

Two men and a woman were arrested in a disturbance outside NapaSport early Sunday morning, according to Napa Police.

A San Rafael man was arrested on suspicion of attempted murder after his niece was seriously injured at a party in American Canyon, according to police.

Two people were arrested Sunday after a high-speed pursuit from Napa to Contra Costa County.

A man is accused of using a cellphone to record video of women at his place of work.

Napa parents are suing an equipment rental company following the death of their 6-year-old daughter.

Highway 12 closed in both directions between Santa Rosa, Sebastopol due to downed power lines early Monday

These are some of the warning signs posted at the lot at Elm Street and Riverside Drive, where an apartment complex was torn down five years ago due to industrial pollution from a former gas plant. Pacific Gas & Electric is working on a remediation plan.

Five years ago, the apartment complex on this site at Riverside Drive and Elm Street was torn down because of pollution from the historic Napa City Light & Heat Co, which opened in 1888.