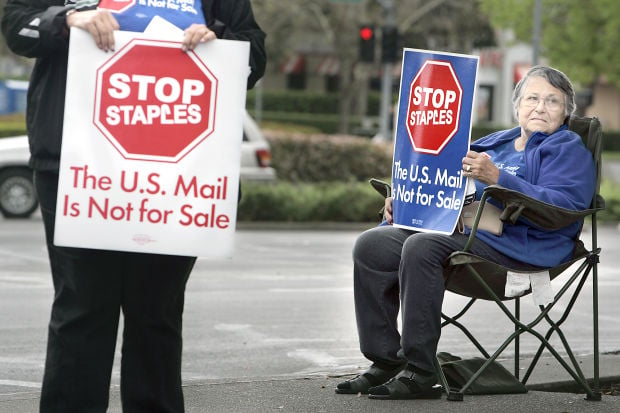 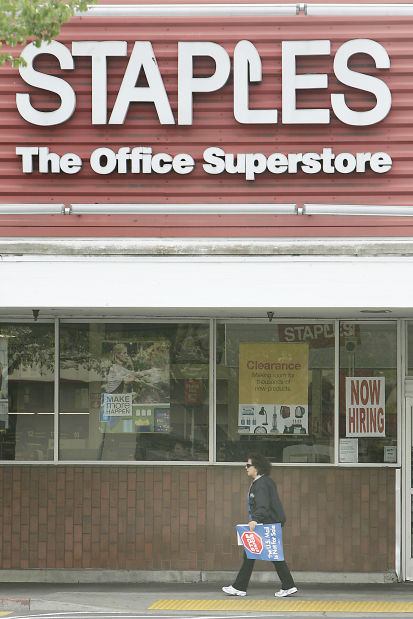 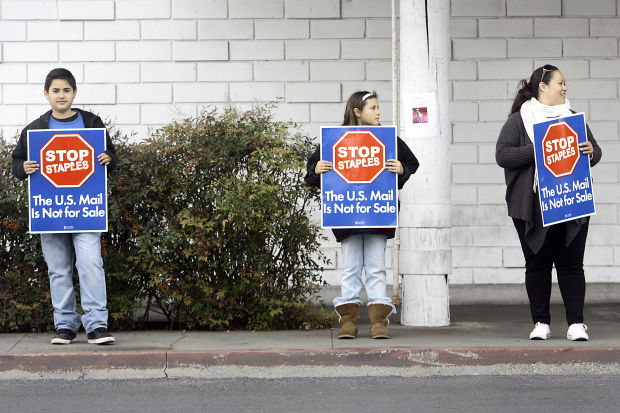 FRIDAY - MARCH 28, 2014 - NAPA, CA - Joanne Alberto, right from Vallejo, is joined by her children, 11-year-old Marcelo, left, and Isabel, 10, during a protest outside Staples in Napa on Friday. Alberto is a postal worker at the San Francisco main facility and was part of about 20 people protesting the U.S. Postal Service's opening of mail centers inside Staples stores. J.L. Sousa/Register

Inside the Staples office supply store in Napa, in the corner beside the photocopiers, is a counter offering package delivery, stamps and other trappings of a post office. But the 20 sign-wielding visitors flanking the Trancas Street store’s entrance were anything but satisfied customers.

“The U.S. mail ... is not for sale!” members of three postal workers’ unions shouted in call-and-response fashion in a protest against the U.S. Postal Service’s opening of 82 mail centers inside Staples stores.

The American Postal Workers Union, the National Postal Handlers Union and the National Association of Letter Carriers partnered for Friday’s mid-day protest — the second in a month outside the Napa Staples, located less than two blocks from the city’s main post office.

Amid the passing of customers’ vehicles and periodic honking by sympathetic visitors, protesters alternated their chanting with their demand — that Staples staff its mail centers with existing postal workers and not store staff, whom they called poorly paid and ill-trained.

“Our message to the public is they should be concerned with the security and sanctity of their mail,” said Steve Lysaght, president of the APWU’s Local 47, which includes postal employees in Napa County.

Staples workers manning the in-store mail counters do not take the written examination or get the on-the-job training required of Postal Service employees, he said.

“People don’t know; they go in there and think they’re dealing with postal employees,” said Darla Kilgannon, who retired after 34 years with the Postal Service and remains an APWU member.

Over the past two months, Lysaght and others have taken their cause to more than a dozen Bay Area Staples stores to warn passers-by not only about mail security but financial security, saying the outsourcing of postal services threatens the future of living-wage jobs with health benefits.

“This erosion affects everyone,” said Lysaght. “If someone makes $50,000 a year instead of $18,000, they can afford to patronize this business” — he glanced across the driveway toward the Staples — “buy a car, perhaps own a home.”

Carrie McElwee, spokeswoman for Staples Inc., referred questions about the partnership and its future to the Postal Service. “As a matter of policy, we don’t provide details on our pilot programs or on our agreements with vendors,” she wrote in an email.

Augustine Ruiz, a spokesman for the Postal Service, said the purpose of the pilot program at 82 Staples stores was to “collect data and feedback to enable the Postal Service to validate operational and financial assumptions to determine if expansion is suitable.

“Based on the preliminary data and feedback, Staples has recently expressed an interest in expanding the pilot to additional stores. In accordance with the collective bargaining agreement, we are considering whether the program proposed by Staples constitutes subcontracting of bargaining unit work,” Ruiz said.

“If it does, we will adhere to the applicable provisions in our collective bargaining agreement that deals with subcontracting,” he said.

Friday’s protest was the second outside the Napa Staples since late February, and part of a wave of demonstrations the three major postal workers’ unions have staged outside the company’s stores since mid-January, including larger branches in San Francisco and San Jose.

Staples launched its partnership with the Postal Service in November, opening kiosks inside of the office supply shops for a pilot project. The Napa outlet is one of 32 in California to offer postal services, along with stores in Massachusetts, Pennsylvania and Georgia.

While products such as stamps already have been sold through supermarkets and other retailers, participating Staples branches also let visitor mail letters and ship packages, including those sent by certified, overnight or two-day Priority mail. The in-store postal outlets also are open seven days a week, along with their host stores.

The Postal Service’s experiment comes as the agency battles to slash expenses and prop up revenues amid a steady erosion of mail volume and a 2006 congressional mandate to pre-pay $5.6 billion annually in workers’ health-care costs.

However, the Staples in-store mail centers are not staffed by Postal Service employees but by Staples staff — a fact the postal unions call a threat to workers’ wage and benefit levels. The APWU says postal clerks earn up to $25 per hour, plus health insurance and other benefits, while many Staples employees make little more than the minimum wage.

“If (Staples) would staff these with postal employees we’d be fine with that, but they’re not postal employees,” said Debbie Mealey of APWU Local 78 in Oakland, a protester in Napa, adding she was not seeking the closure of the in-store postage centers.

“When I first saw a Staples store with a postal center inside, it looked just like a small post office,” Andrew Carriata, another member of Local 78, said Thursday before the protest. “Well, this is a perfect excuse for the Postal Service to say ‘No one’s coming to your post office, so we can cut back even more’ — that was my gut reaction.”

As the unions’ Staples protests began in January, Postmaster-General Pat Donohoe said the program is meant only to broaden the availability of postage and shipping, and not to privatize or replace any of the Postal Service’s 33,000 official branches.

“The privatization discussion is a ruse,” he told The Associated Press at the time. “We have no interest in privatizing the Postal Service. We are looking to grow our business to provide customer convenience to postal products.”

One of the country’s dominant sellers of office supplies and equipment since its 1986 inception, the Framingham, Mass.-based retailer reported flagging revenue and stouter competition from online retailers in the financial results it announced March 6. Staples reported a 6.1 percent revenue decline in North America for 2013 from the previous year, to $11.1 billion, and said it would close 225 branches by the end of 2015.

“If a post office closes and then Staples closes a branch, that community can be left with nothing,” said Carriata. “Once that happens, you can’t control what the private sector does.”

Kilgannon, the retired postal worker, said her goal is not to stop the expansion of post-office services, but to ensure equal pay and working conditions wherever those services are given.

“This is not about boycotting Staples, but at least other stores (selling postage) are not pretending to be a post office,” she said. “Safeway is just selling you a stamp.

“I want the post office to be still around for my 5 1/2-year-old granddaughter. I don’t want to stop (Staples’) expansion, but I want postal workers in there.”

This story has been corrected. Staples opened 82 mail centers. Also, the Postal Service's response has been added to the story.

The death of a man whose body was found midday Sunday in west Napa is not considered to be suspicious, according to police.

An attack with a large piece of wood resulted in a man’s arrest Friday on suspicion of assault, according to police.

NVUSD has enrolled 158 fewer students for the new school year than previously forecast, according to a report shared Thursday.

FRIDAY - MARCH 28, 2014 - NAPA, CA - Joanne Alberto, right from Vallejo, is joined by her children, 11-year-old Marcelo, left, and Isabel, 10, during a protest outside Staples in Napa on Friday. Alberto is a postal worker at the San Francisco main facility and was part of about 20 people protesting the U.S. Postal Service's opening of mail centers inside Staples stores. J.L. Sousa/Register