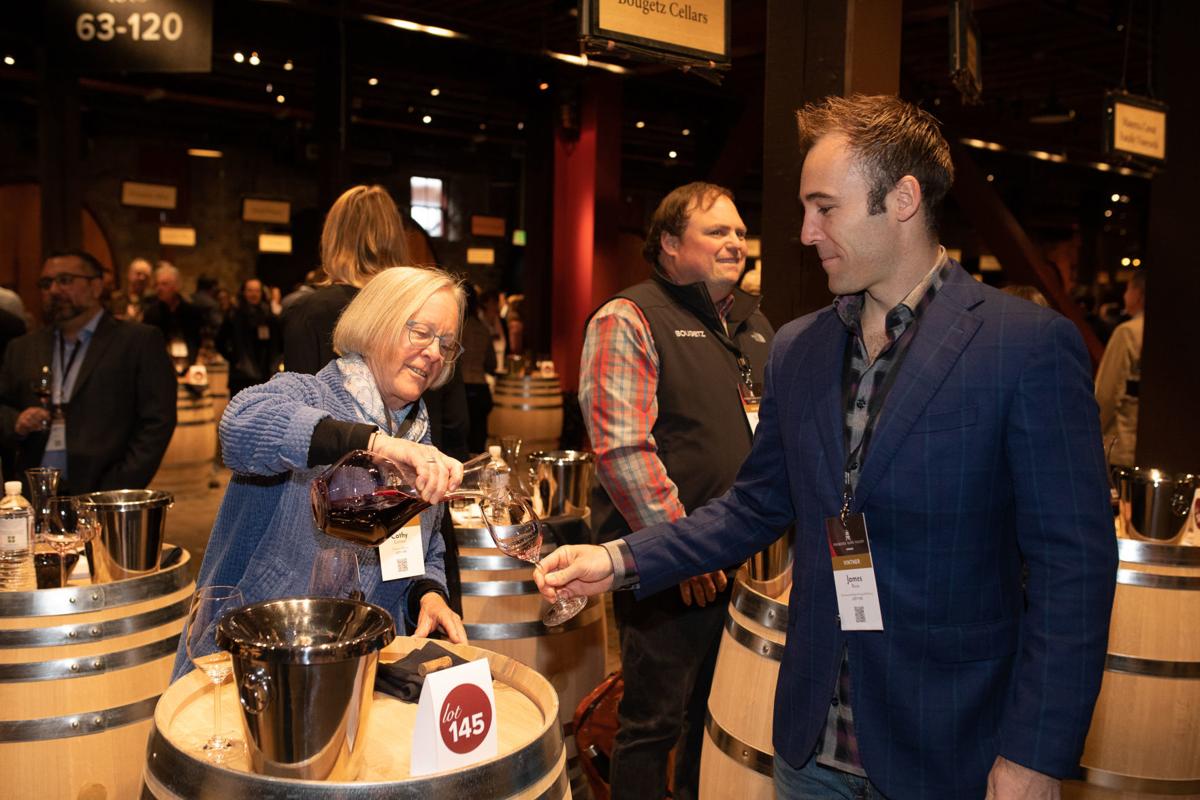 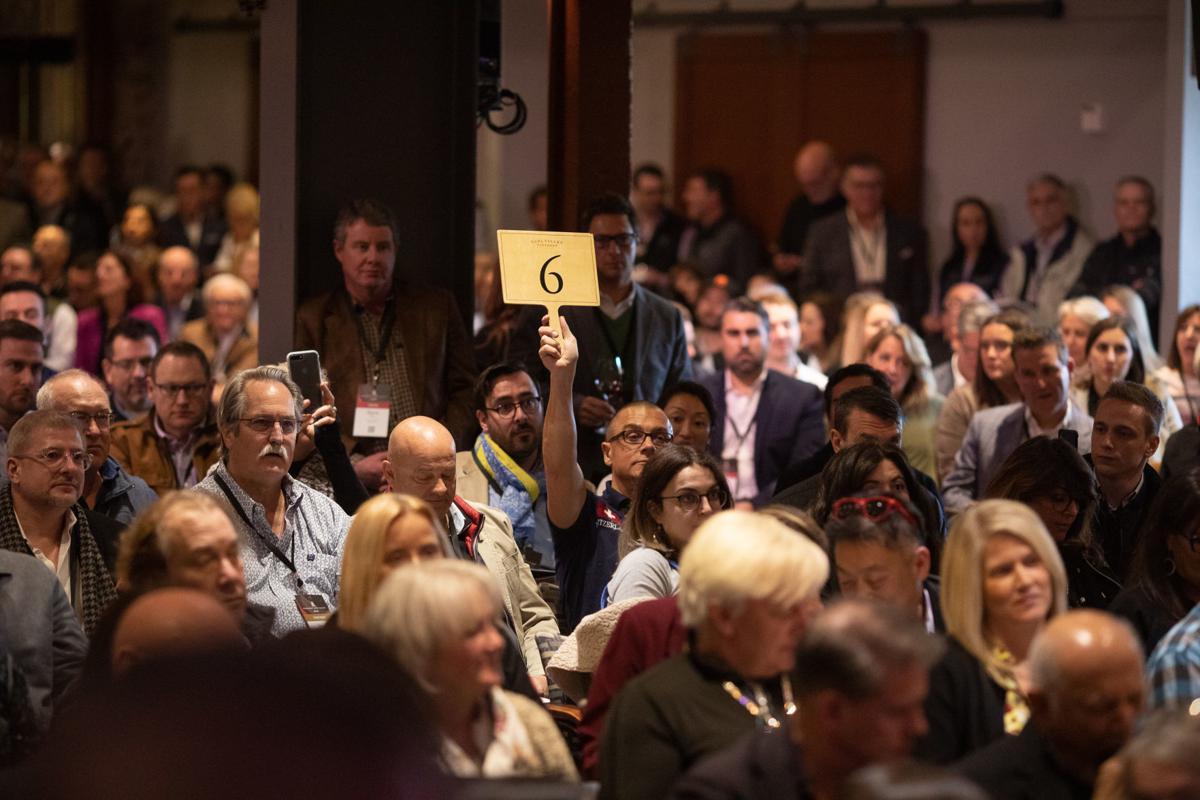 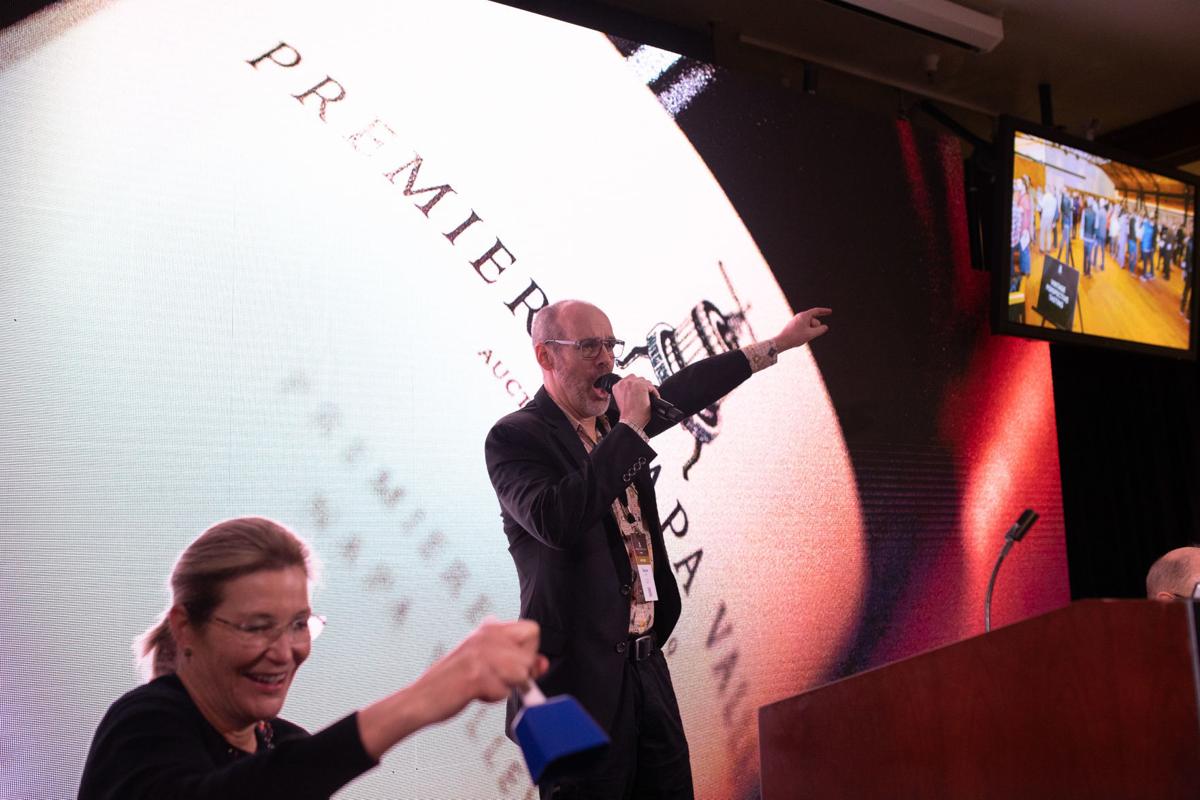 ST. HELENA — For a few hours Saturday, the Culinary Institute of America at Greystone became the center of gravity for Napa wine, with the Premiere Napa Valley live auction drawing winemakers throughout the valley and bidders throughout the world into the same room.

In its 23rd year, Premiere, the wine industry’s annual “homecoming”, brought more than 1,200 members of the wine trade to the valley for a week of events that culminated in Saturday’s main event, the wine futures auction.

The once-a-year auction itself caters to trade members hoping to own rarified wines made in small amounts specifically for Premiere. Bidders include retailers, distributors, restaurateurs, smaller wine shops; “It’s a little bit of everything,” said winemaker Aaron Pott, chair of the 2019 Premiere steering board.

One hundred and eighty-six Napa producers supplied this year’s wines in lots of five, 10 or 20 cases that, for the most part, are still aging in barrels and will be for months to come.

Proceeds from the auction ultimately fund the Napa Valley Vintners trade group of the local wine industry. Last year’s auction raised over $4 million for the group, with the highest single bid coming in at $110,000 for a 20-case lot of Silver Oak Cabernet Sauvignon.

On Saturday, the same size lot from Silver Oak reeled in a $140,000 bid, one of the largest, if not the largest of the day. At 12 bottles per case, the cost of each Silver Oak bottle came to about $583.

With Cabernet Sauvignon from 2017 making up the vast majority of this year’s lots, the event also marked a debut of sorts for the wines of a growing season punctuated by excess rain, a bout of hail, a Labor Day heat spike and finally the 2017 North Bay fires.

The Napa Valley Vintners at the time reported that almost 90 percent of Napa’s grapes were harvested before the fires began. Still, speculation swirled around the impact the fires and their ensuing smoke might have on the quality of the year’s wines.

“So much of the grapes were already picked by the time the fires arrived anyway,” Pott reiterated earlier this week. “So I don’t think we’re going to see any lots on Saturday that are going to show any fire characteristics, but we’ll see.”

Winemakers spoke kindly of the vintage during the walk-around barrel tasting held Saturday morning ahead of the live auction at the CIA Greystone.

“What I’ve tasted has been really good,” Pott said of the other lots on Saturday. “It’s surprising because it’s a very hot vintage,” he said. “It’s good to see a lot of nice wines that aren’t pruny or dehydrated.”

“It was a great year,” said winemaker Steve Matthiasson. “It had some pitfalls toward the end you had to work with. Luckily the fires didn’t affect us. I really enjoyed the vintage actually.”

For his lot of 2017 Cabernet Sauvignon, Matthiasson put the spotlight on his Phoenix Vineyard in the Oak Knoll District, a site that yields “a very rustic, old school Napa Cab,” he said.

While still aging, the wine today is aromatic, focused and bright, he said. “When you think Napa Cab, ‘refreshing’ isn’t always the first word that you think of. But this is a refreshing Napa Cab.”

For the most part, Premiere lots are fashioned according to the whims of their winemakers, Pott said earlier this week.

“It’s kind of a real personal time,” Pott added. “And the winemakers, as a group, recognize the other winemakers’ talents and it’s a chance for us to show off a little bit in that way.”

Pott served as winemaker of the lots for his own Pott Wine label, as well as those from Seven Stones, Somnium and Saint Helena Winery. The lot for Pott Wine, a 2017 Cabernet Franc from Pott’s estate vineyard, Chateauneuf-du-Pott on Mt. Veeder, ultimately sold for $35,000 in the live auction. During the 2017 fires, Pott nearly lost both his vineyard and winery, he said, adding that with “incredible luck” all of his grapes were picked before the fires began.

With a reputation built on Cabernet Franc, the father-son winemaking team of John and Reed Skupny this year offered up the only Chenin Blanc ever made for Premiere from their winery, Lang & Reed Wine Company. Once the most planted white winegrape in Napa, the Chenin Blanc for the Skupnys’ lot came from one of only 17 remaining acres in the county. That total is soon to be 16 acres, John Skupny said, with his wine’s source vineyard set to be pulled this spring.

Chenin Blanc tends to be reticent while in barrel, Skupny said, and once bottled, “for the first month it’ll taste like water. It just sort of shuts down.”

With about five or six months’ time however, the wine’s honeycomb, melon and waxy characteristics will begin to come through.

“Chenin has a capacity to really slake a thirst, but done in a different fashion it can age really well.”

But perhaps the day’s best example for ageability was the 5-case lot of 1998 J. Schram from Schramsberg Vineyards, which spent 20 years in the winery’s Calistoga caves.

Schramsberg owner Hugh Davies ran out of sample bottles to pour during the barrel tasting. “I think that the sparkling (wine) in a sea of Cabernet, people are wanting to drink it more than the average Cabernet,” Davies said.

Sourced from sites across the Carneros, the wine was bottled in the spring of 1999. Since Premiere began, the winery has set aside older vintages to be used for the event, Davies said.

“It’s been a nice way to give a little bit of shine to our program,” he said, “where people come into a room like this and there are all these Cabernets.”

At 20 years old, the wine’s original tart flavors had opened to the toasted, nutty notes and creamy texture older sparkling wines are given to.

“The whole world doesn’t even know it,” Davies said. “’20-year-old sparkling is a good thing?’ So some enthusiasts are definitely already on board, and granted, the people that would come to Premiere Napa are real wine enthusiasts, so they get a little bit giddy about it.”

In the end, the 60 Schramsberg bottles sold for $24,000, while all told, Saturday’s auction brought in nearly $3.7 million for the Vintners.