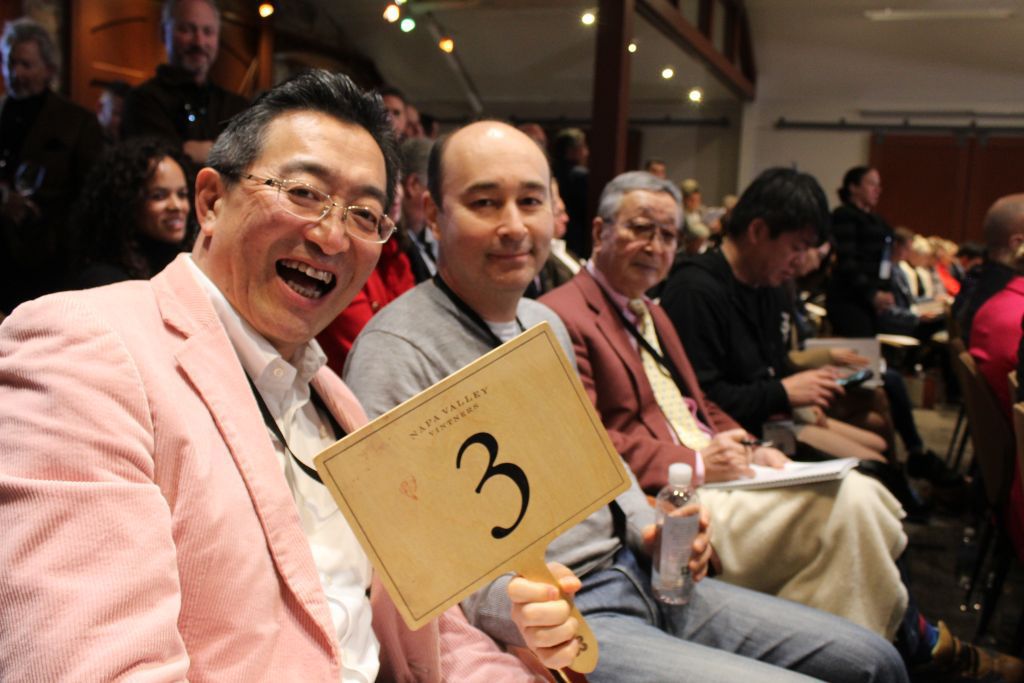 Sei Nakagawa, left, of Nakagawa Wines in Tokyo smiles next to his paddle in between auction lot bidding. 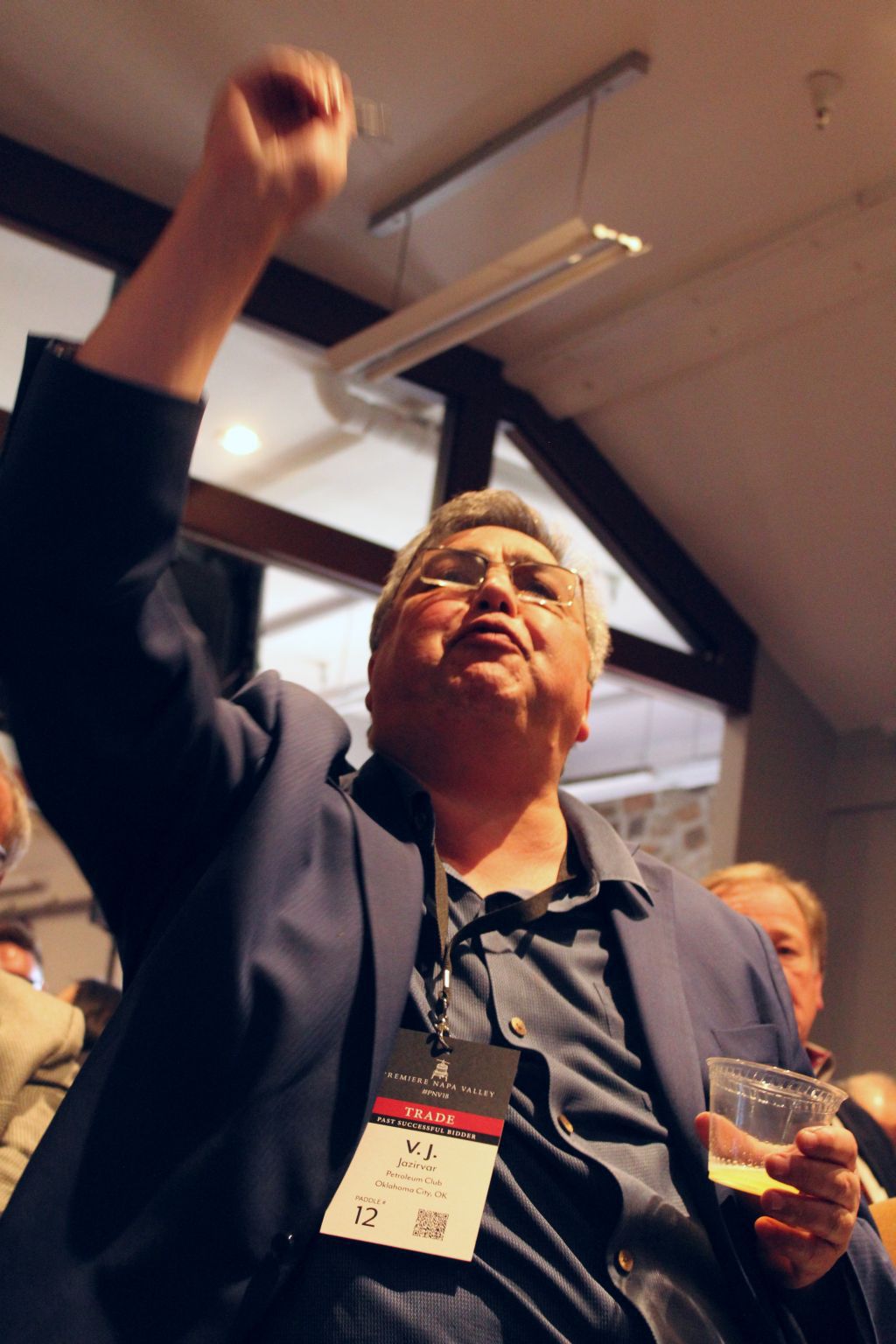 V.J. Jazirvar from the Petroleum Club from Oklahoma City bids on the 20-case lot of Rombauer Vineyards 2016 Cabernet Sauvignon made from grapes from Rombauer’s Atlas Peak Vineyard. When asked afterward, how much he had set at the wine auction, he replied, "I don't know, they will send me a bill." He did win the Rombauer lot, which sold for $75,000. 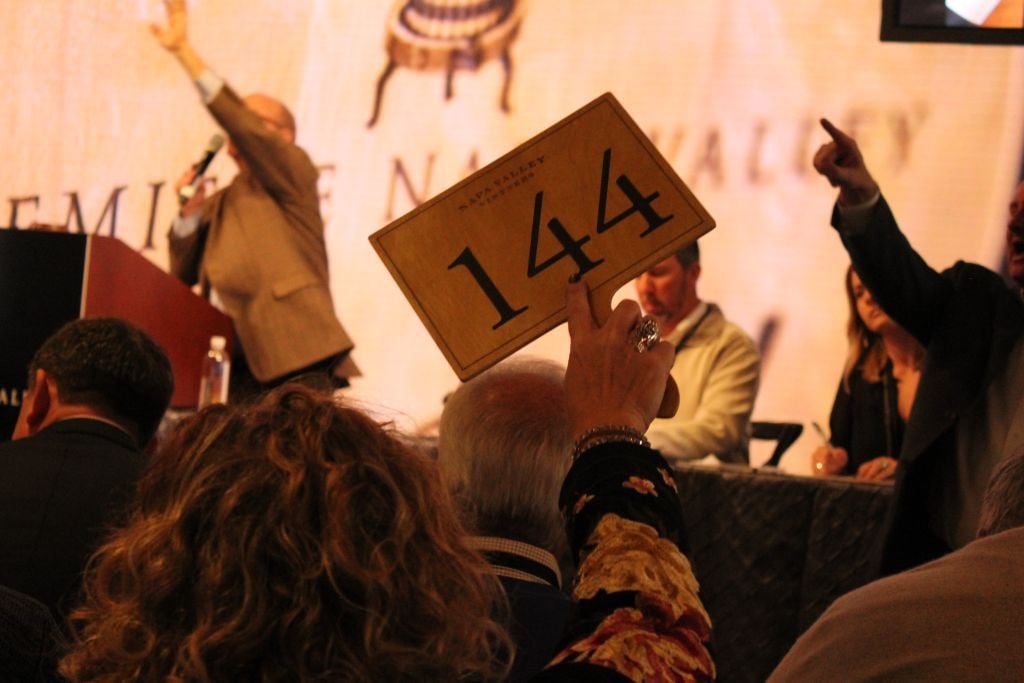 Auctioneer Fritz Hatton, left, gets wine buyers to raise their paddles in a spirited bidding of Napa Valley wines during Premiere Napa Valley 2018. 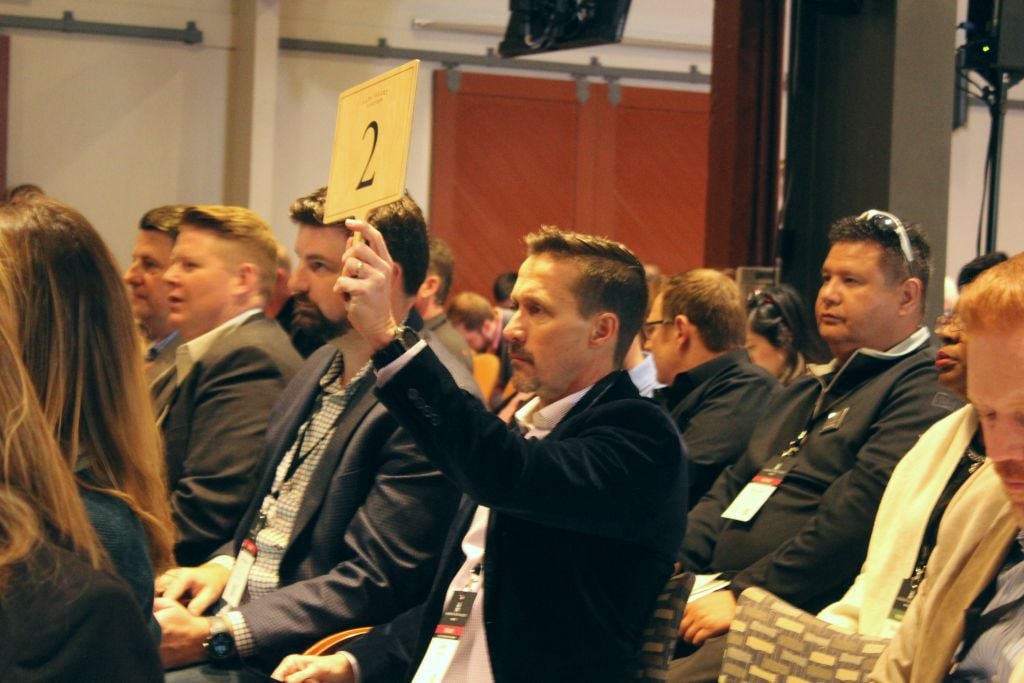 Dan Schuette, director of beer and wine department of HEB Grocery in Texas, raises paddle No. 2 in a competitive bidding for Napa Valley wine during Premiere Napa Valley 2018. 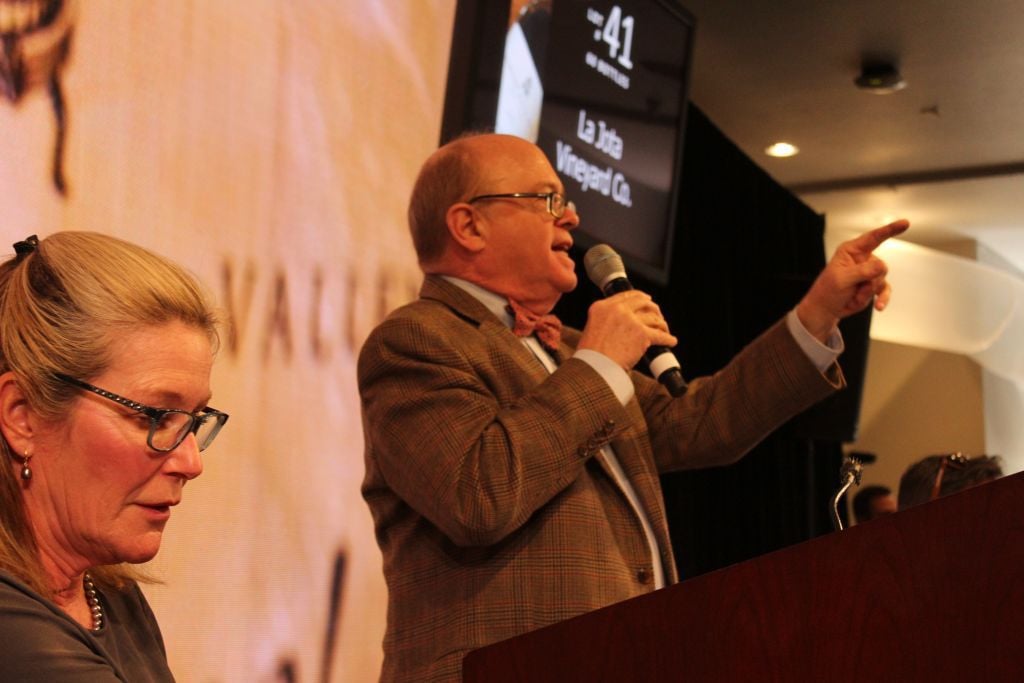 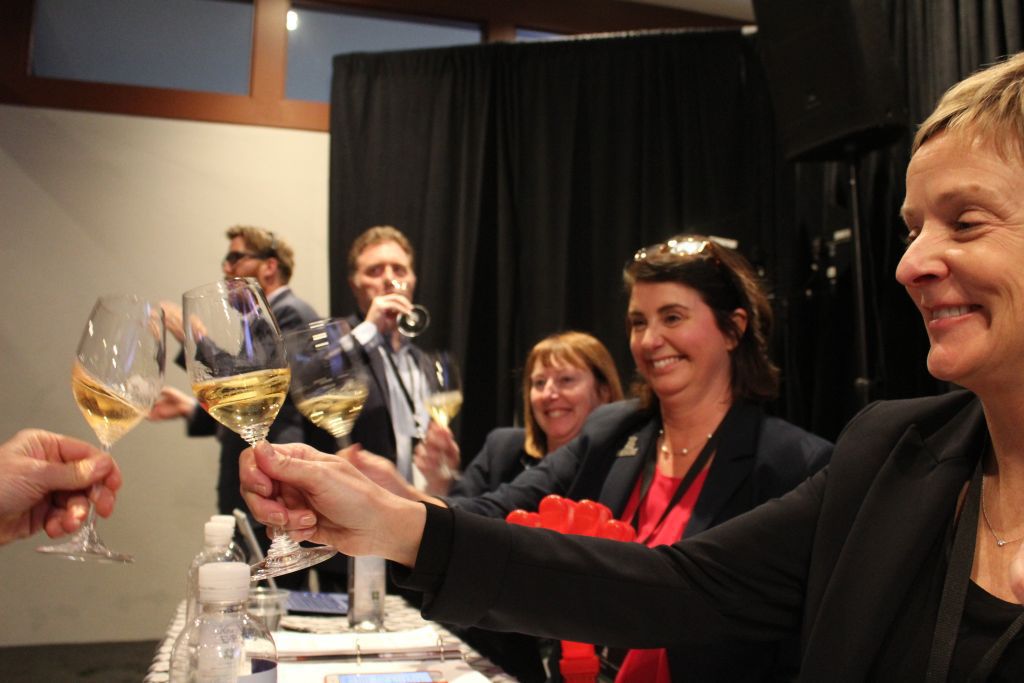 Linda Reiff, President and Chief Executive Officer of the Napa Valley Vintners, raises a glass of sparkling wine with other Vintners' staff to celebrate the conclusion of 2018 Premiere Napa Valley on Saturday. 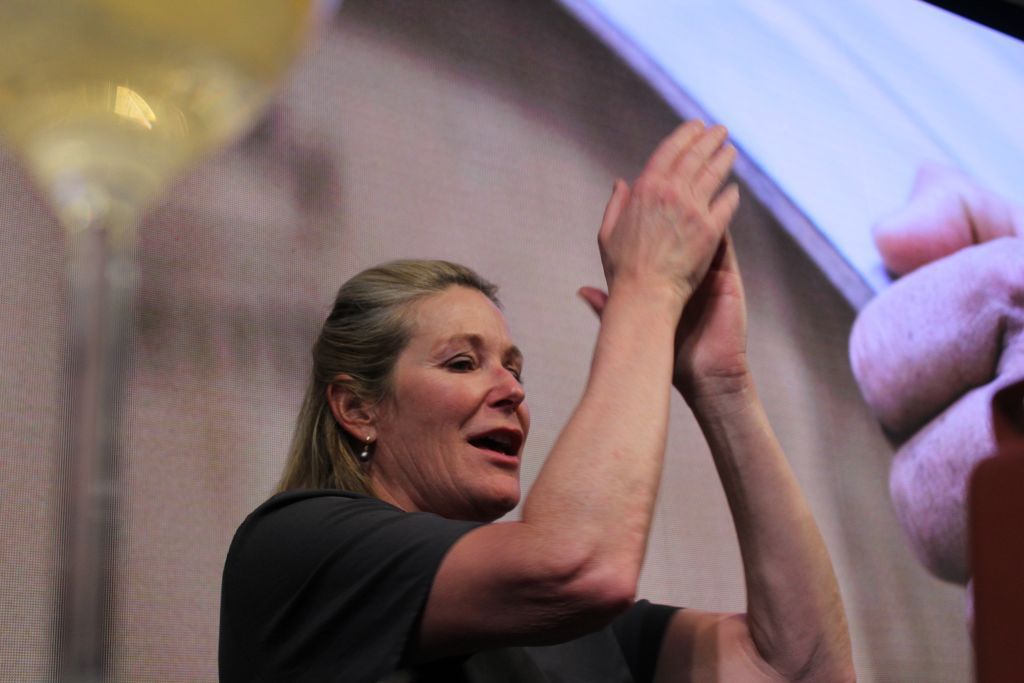 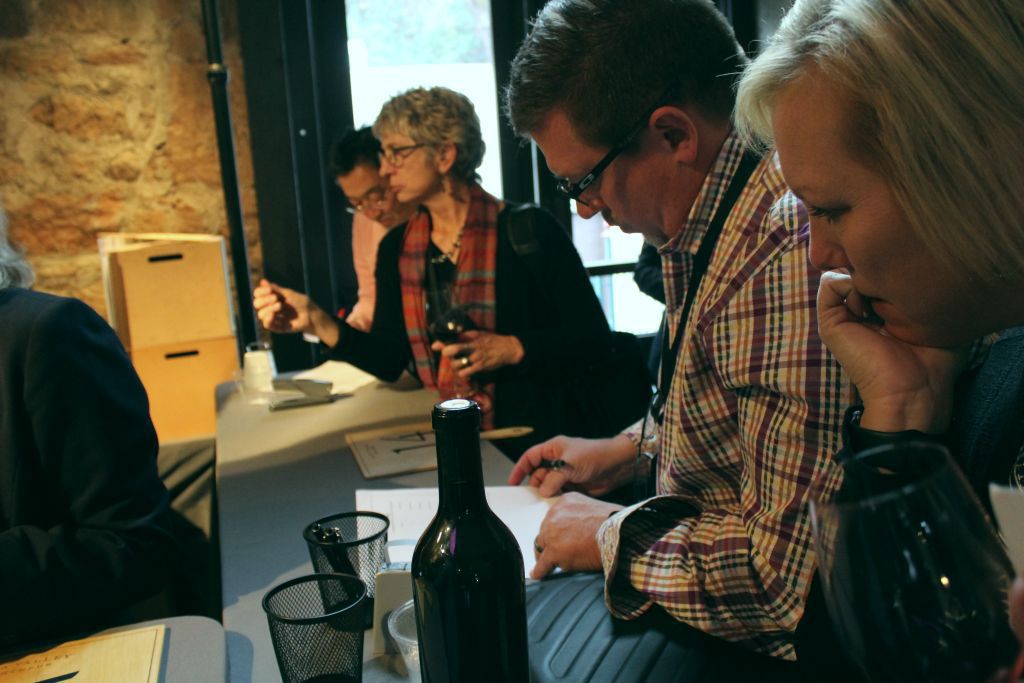 Hermacinski sold the top-selling Silver Oak Cabernet, starting the bidding at $44,000. Bidders packed the auction site, the third floor at the Culinary Institute of America at Greystone, and quickly bid $55,000, $65,000 and then $75,000. As the bidding went higher, Hermacinski called for people to ring more cowbells and the crowd began shouting and cheering. The auction bid reached $90,000 and then crossed the $100,000 level. Cristina Pearce of Total Wine & More from Bethesda, Maryland, one of the auction’s perennial top bidders, won the wine lot for $110,000.

The wine, like all the others auctioned off Saturday, remains in the barrel. The Silver Oak Cabernet will be available in January 2020.

At the end of the live auction, Jeff Smith, Hourglass founder and CEO, said he was “fired up. It was a really great day. The flow of the auction itself had a nice pace, good energy and the floor bids were higher than normal, even though the crazy, exuberant bids weren’t there this year, in part because Scarecrow wasn’t a part of the auction this year.”

Smith, who served as 2018 Premiere Napa Valley steering committee chair, said the higher bids for all the wines indicates that the state of the wine industry is in a healthy place. He called the 2016 vintage “phenomenal” and added it is “one of the best vintages in the last few years and maybe in quite a while.” The day began with all 186 wines in barrels, available for all to taste. Smith said going through the tasting “confirmed my perspective on the quality of the ’16 vintage. I would put it right in there with 2013, one of the better vintages in the last 10-15 years.”

The barrel tasting and live auction was the highlight of the week for many of the wine buyers, who returned to the Napa Valley for the first time following last October’s wildfires that ravaged parts of Napa and Sonoma counties.

“This week was a testament to how much our trade partners value their connections to Napa Valley, our vintners and their wines,” said Linda Reiff, president and CEO of the Napa Valley Vintners. “We are deeply grateful for their positive spirit and outpouring of support, from last fall through today.”

On Saturday, following tradition, the chair’s lot is sold first. Hatton started the auction off by selling Smith’s Hourglass lot, five cases of 2016 Cabernet Sauvignon, for $60,000, after starting at $25,000.

Three other wine lots each raised $75,000 and nine of the top 10 and more than 130 lots overall were 2016 Cabernet Sauvignons from various producers.

The 20-case lot of Rombauer Vineyards’ 2016 Cabernet Sauvignon was made from grapes from Rombauer’s Atlas Peak Vineyard. Hatton started the bidding low and it quickly got to $55,000. He asked for $60,000 and it quickly became clear that two people were bidding for it: the group from Total Wine & More and V.J. Jazirvar from the Petroleum Club from Oklahoma City. As Jazirvar bid $70,000, the crowd began a raucous cheer, complete with whistles, shouts and cowbells, but then Pearce bid $75,000 and won the bid for the 20 cases of the Cabernet Sauvignon.

The other two wines that sold for $75,000 were both 2016 Cabernet Sauvignon: a five-case lot from Vine Hill Ranch from Oakville and a 10-case lot from Alpha Omega, made with Oakville grapes from two famous vineyards owned by Andy Beckstoffer, Dr. Crane and To Kalon. Auctioneer Hermacinski sold both lots, starting at $4,000 for the Vine Hill Ranch lot, which bidders quickly jacked up to $30,000, then more than doubled it, ending at $75,000.

Speaking about the 2016 vintage, after sampling the wines from the barrels on Saturday, both Napa wine retailer Stefan Blicker and Dustin Cano, a longtime Premiere Napa Valley supporter, were impressed.

Blicker, who is owner of BP Wine and Last Bottles Wines, said, “This was the most impressive Premiere I can recall in years and one of the most enjoyable in the consistency and excellence of the wines. There is a wonderful concentration and length and terrific lift in all the wines and while there is plenty of tannin, it is very fine and harmonious, a contrast to the powerful and sometimes chunkier tannins of the ’13s and some ’15s.”

He added the 2016s comprise “a very exciting vintage and one that should age spectacularly.”

Cano of Meritage Wine Market in Encinitas, said, “The 2016 vintage showcases the perfect combination of power, purity of fruit and supple, silken textures that are the hallmark of the Napa Valley. There is a balance to the wines and a freshness that makes them gorgeous early, but with the intensity, structure and backbone to age beautifully.”

The auction is open only to the professional wine trade of retailers, restaurateurs, country clubs and wholesalers. Saturday’s barrel tasting and futures auction features a week of educational programs, including dozens of preview parties and tastings.

The annual event was held, as always, at the CIA at Greystone in St. Helena. It is sponsored by the Napa Valley Vintners, a nonprofit trade organization, who use funds raised to support its mission to promote, protect and enhance the Napa Valley brand.

All 2016 Cabernet Sauvignon, except Ovid

Ask the vintners: The Napa Valley Vintners’ other wine auction