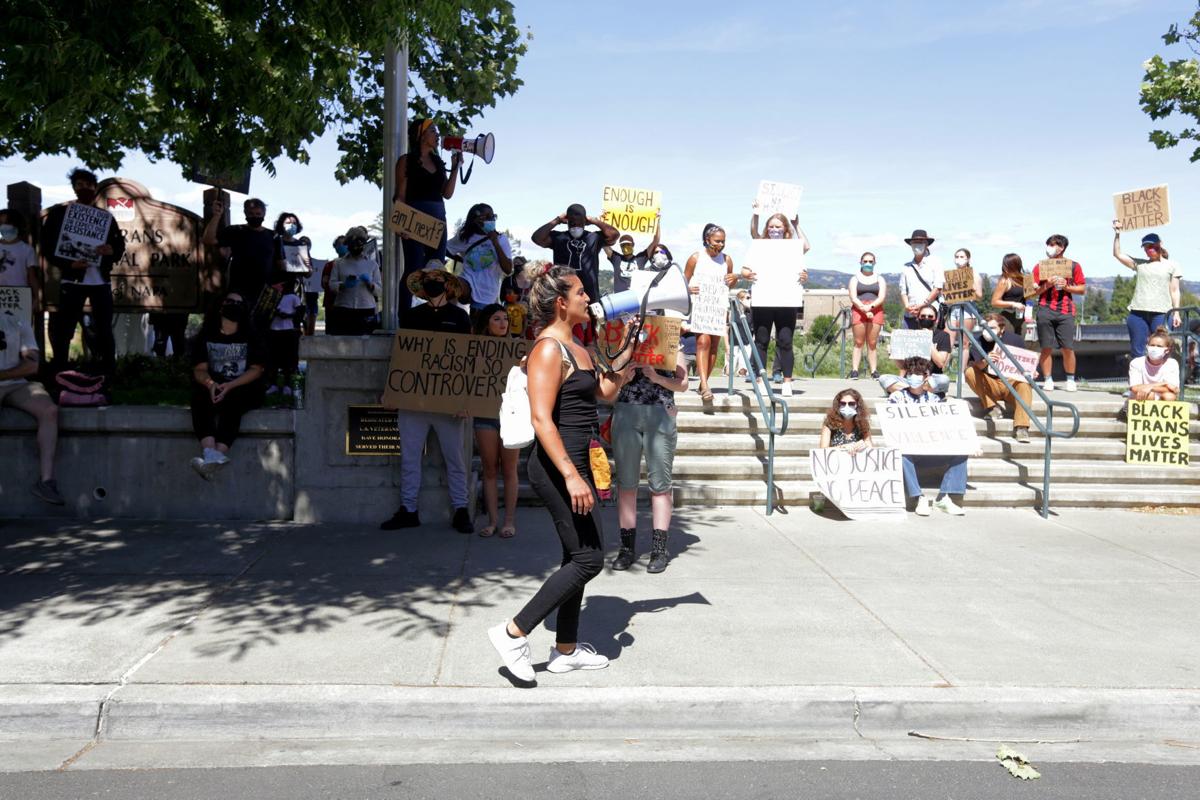 Gabriela Fernandez (foreground) leads demonstrators in chants of "No justice, no peace!" at Veterans Memorial Park during the third weekend of protests in Napa inspired by the death of George Floyd, a black man, during an arrest by Minneapolis police last month. 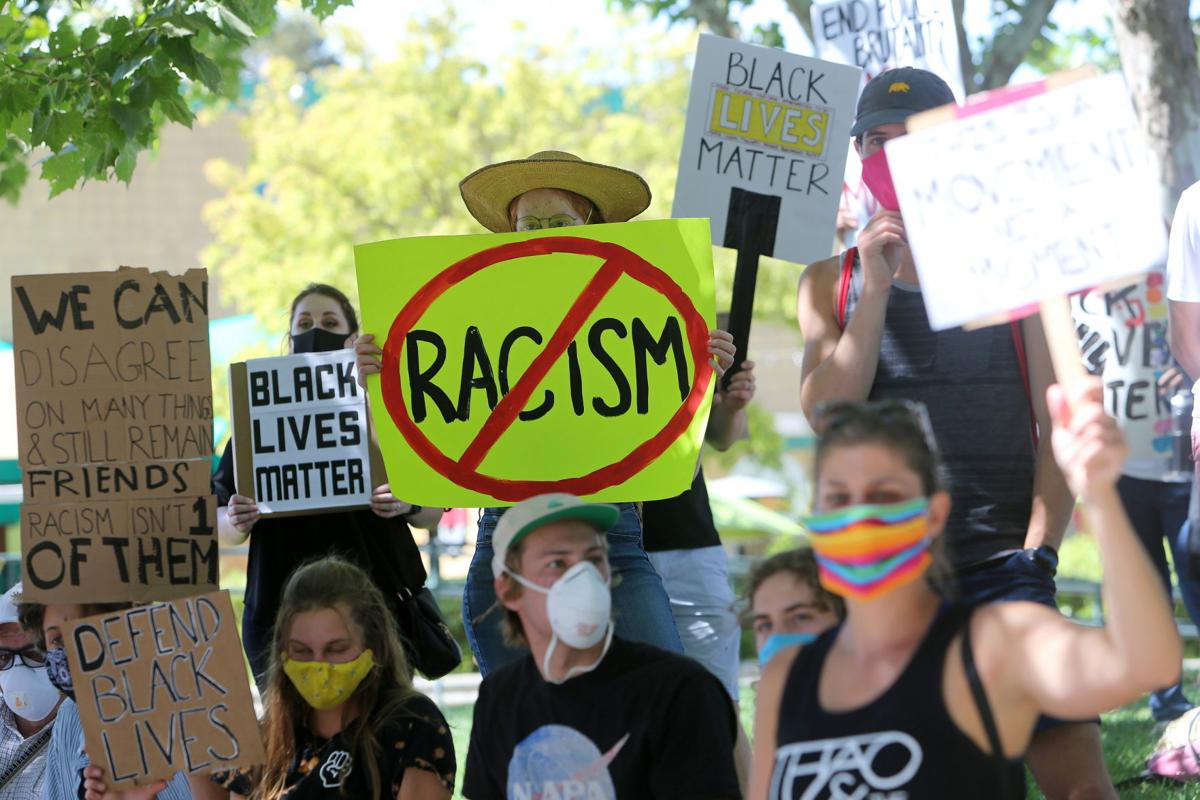 Some 100 people gathered at Napa's Veterans Memorial Park in the opening minutes of a protest against police brutality and racial discrimination, one of numerous such protests to take place nationwide since the death of George Floyd during an arrest in Minneapolis was captured on video. 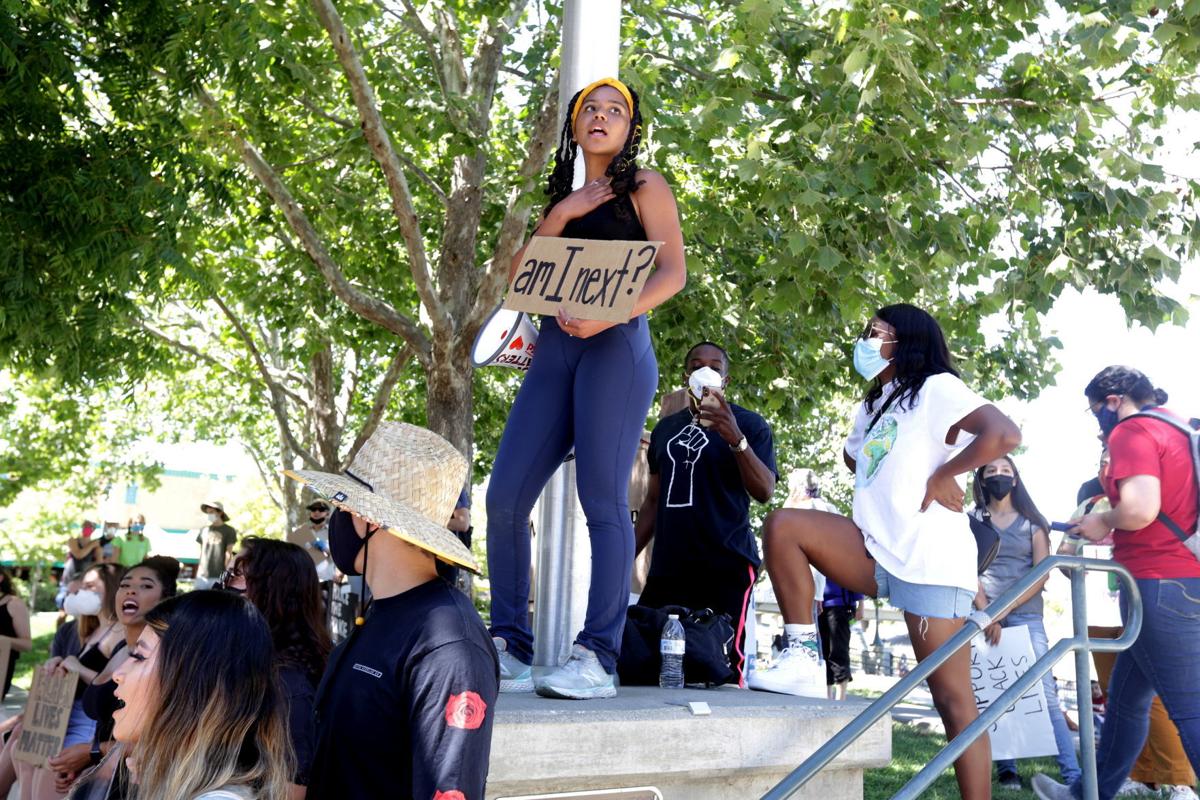 Veterans Memorial Park in Napa has become the local hub of protests against police brutality against people of color, including a demonstration Sunday afternoon. 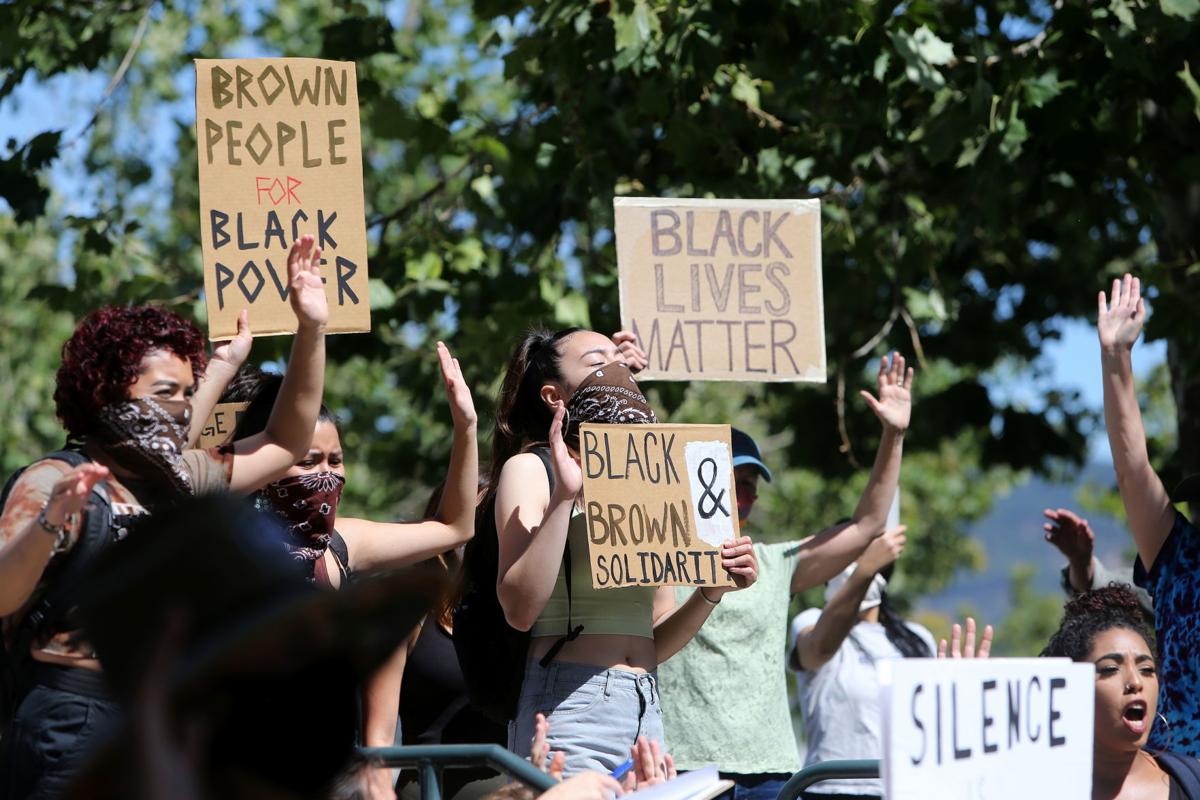 For a third consecutive Sunday, the streets of downtown Napa were filled with a bevy of “Black lives matter!” chants and calls to end police violence against minorities. But mixed with the slogans, signs and fist-raising were promises by protest organizers to push local law enforcement for changes that will last even after the hottest bursts of outrage over George Floyd’s death finally cool off.

A third Sunday of protesting against racism and police violence, part of a wave of demonstrations following the death of George Floyd, is in progress in downtown #Napa. Story to follow later in the ⁦@NapaRegister⁩ pic.twitter.com/ppUSIgtdPG

More than 100 demonstrators gathered along Main Street starting at 3 p.m., holding aloft placards and chanting against police brutality in the latest protest inspired by Floyd’s death May 25 during an arrest by Minneapolis police. Leading protesters with the use of megaphones, leaders directed a succession of call-and-response chants calling for and end to racial targeting by law enforcement, and shouting the names of African Americans killed in police encounters, from Floyd to Trayvon Martin to Oscar Grant and others.

Nearly three weeks since of Floyd’s death, Napa protest organizers who have billed their effort as the People’s Collective for Change also shared with their fellow demonstrators news of their dialogues with city and county law enforcement leaders, which aim to prevent discriminatory policing practices.

In its early stages, Sunday’s demonstration appeared smaller in numbers than Napa’s first two protests, which police reported each drew more than 250 participants and caused several brief street closures. The latest protest began at a Veterans Memorial Park largely dotted with townspeople picnicking, enjoying the afternoon sun or listening to a guitarist strumming tunes in the park’s amphitheater bowl.

“We’re not here for the freedom to listen to music. Yes, this is interrupting your day,” Joshymar Graham, a sociology and psychology student at UC Davis, told the audience. “This is uncomfortable. This is how you’re supposed to feel. This is not a comfortable moment; you’re not supposed to be happy right now.”

Within minutes, the protest took a shape similar to those of the previous two Sundays — a mostly masked group chanting “No justice, no peace!” and calling out the names of minority victims past, all the way back to Emmett Till, the 14-year-old boy murdered in Mississippi in 1955.

Organizers also urged their supporters to respect the free-speech rights of demonstrators scheduled to hold a “We Back Blue” event supporting law enforcement downtown at 6 p.m. Wednesday, on the Third Street bridge. Graham, who said he spoke earlier Sunday with an organizer of the pro-police event, said the People’s Collective would not support anyone going there to counterprotest, and added his group would instead stage an online event at the same time, instructing viewers on registering to vote and upholding the rights of minorities.

Regarding discussions with city and county law enforcement leaders, Fernandez called the creation of an independent review board to look into alleged police misconduct one of the protest leaders’ top priorities — along with teaching supporters how to turn protest into on-the-ground results.

“The next piece is ensuring we are educating people on how to take their actions in protest and turn that into action on a policy level,” she said, pointing to increased voter registration and greater participation in City Council business as examples.

“We understand that the system is broken and not working the way it should,” said Graham. “We’re not of the opinion that we should burn down and abolish the Napa police without a proven alternative.”

Napans have organized a public memorial space to honor the life of George Floyd and other victims of racism and violence.

Rising junior Karen Gallegos began the petition in the hopes of expanding the school's petition to include more about Black history, she said.

A former St. Helena and San Quentin resident, James Alexander, spoke to the St. Helena Rotary Club recently and talked about the program that changed his life.

We could be making better choices if more of us spoke up about the need to keep the discussion civil and give others the benefit of the doubt.

After string of Napa protests against police brutality, We Back Blue rally supports law enforcement

Supporters of law enforcement officers rallied Wednesday on Napa's Third Street bridge, steps from where anti-racism, anti-brutality protests have played out for the last three weekends.

St. Helena is reviewing its police department's use of force policies.

The Trump campaign is requiring the president’s supporters to sign a coronavirus waiver before attending his rally in Tulsa, Oklahoma.

Police Chief Robert Plummer will respond to questions about Napa's existing use of force policies.

An inaccurate picture of police violence

Letters: Black and Blue statistics are not equivalent.

Comments and questions for “Ben from Fresno”

Vandals painted over a Black Lives Matter mural in Martinez on Saturday.

Gabriela Fernandez (foreground) leads demonstrators in chants of "No justice, no peace!" at Veterans Memorial Park during the third weekend of protests in Napa inspired by the death of George Floyd, a black man, during an arrest by Minneapolis police last month.

Some 100 people gathered at Napa's Veterans Memorial Park in the opening minutes of a protest against police brutality and racial discrimination, one of numerous such protests to take place nationwide since the death of George Floyd during an arrest in Minneapolis was captured on video.

Veterans Memorial Park in Napa has become the local hub of protests against police brutality against people of color, including a demonstration Sunday afternoon.