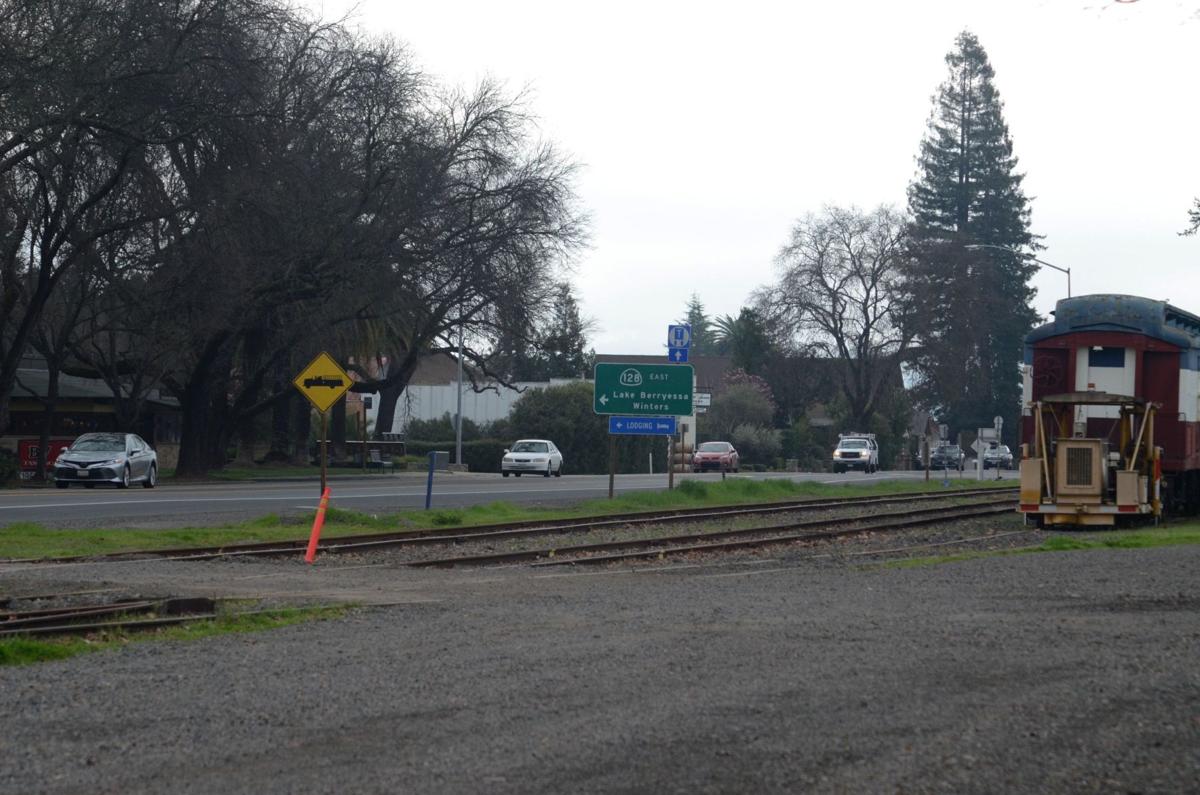 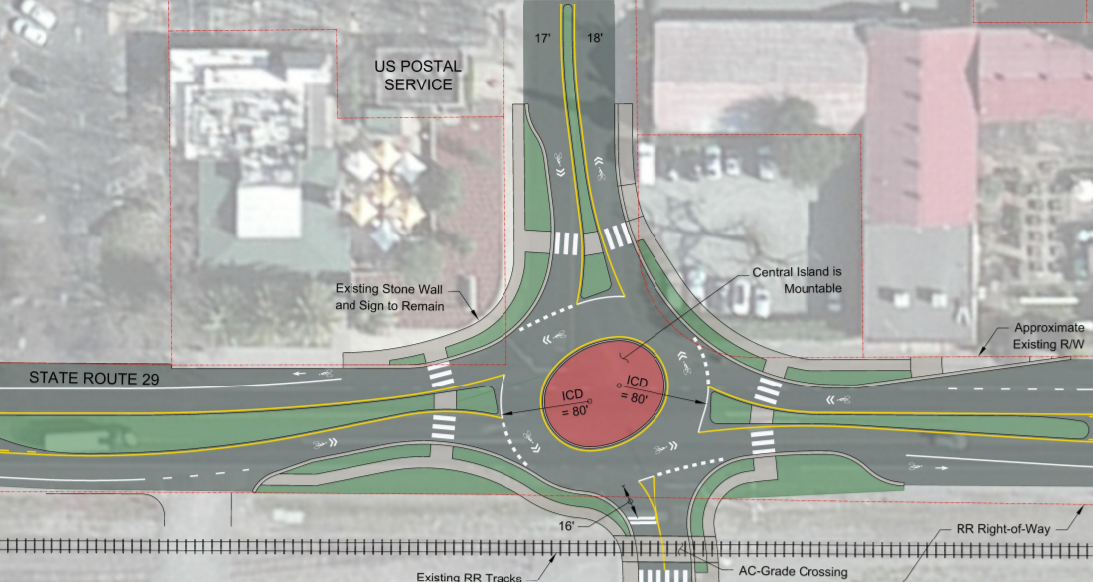 This image shows how a roundabout might fit in at Highway 29 and Rutherford Cross Road.

If a Zoom public meeting is any indication, roundabouts have the edge. Forty-two people participated during the Wednesday evening session.

The Napa Valley Forward coalition is looking at installing roundabouts at the Rutherford Cross Road and Oakville Cross Road intersections at a cost of about $8 million, with the money already secured. Construction could begin in spring 2023.

But traffic signals are still an option to be considered in the project environmental report. More will be known when a draft report is released for public comment, with a spring 2022 target date.

The coalition is also looking at installing a roundabout at the Madison Street intersection in Yountville at a later date. This is the only one of the three intersections that has a traffic signal now. Another option here is removing the traffic signal and eliminating left turns.

The public had the chance to voice opinions during the Zoom meeting.

“Any improvement at the Rutherford Cross is better than none,” vintner Richard Frank said. “At this time of year, the backup is impossible.”

The question came up about bicyclists and pedestrians. The Napa Valley Vine Trail is someday to run along the west side of Highway 29, on the other side of the railroad tracks.

Those future Vine Trail pedestrians and cyclists going straight ahead up-and-down the valley wouldn’t enter the Rutherford Cross Road or Oakville Cross Road intersections. But they would if they wanted to cross Highway 29 to go to a restaurant or store.

Either signalized or roundabout intersections would be much better than what exists now, said Chuck McMinn of the Napa Valley Vine Trail Coalition. As it stands, pedestrians and cyclists would have to “kind of dart across traffic, which is kind of suicidal,” he said.

Either roundabouts or traffic signals are expected to reduce collisions, said Frank Perry of GHD consultants. But he also said signalized intersections have 32 central collision conflict points and roundabouts have eight.

Also, collision frequency is expected to be higher with a traffic signal. That's because drivers slowing down to enter a roundabout have more time to react, Perry said.

Roundabout can also have an intimidation factor for some drivers. But 84% of the participants said they feel comfortable driving in them.

The Zoom meeting was not the public's last chance to weigh in on the plans.

“This is just the first step in that process,” Napa Valley Transportation Executive Director Kate Miller said. “I want to make sure you all are aware you have plenty of opportunity to make comments and to ask questions.”

Go to https://bit.ly/3zFbLRg to find out more about the intersection projects.

Napa Valley Forward is a partnership among the Metropolitan Transportation Commission, Napa Valley Transportation Authority and various stakeholders in the wine and hospitality industry. The goal is to improve traffic flow on Highway 29 and Silverado Trail.

Make no bones about it, Napans Frank and Jennifer Rodriguez love celebrating Halloween.

Dry Creek Road near Napa is being reborn

Napa County will turn the mile stretch of Dry Creek Road north of the city of Napa essentially into a new road.

Work will soon start renovating the deteriorating Imola park-and-ride lot. It could just be a beginning for Imola Avenue.

The proposed 12-home Western Meadows Subdivision, located at 1044 Borrette Lane, was unanimously approved by the Napa City Council on Tuesday.

The Napa County Board of Supervisors sided with Scarlett winery in the latest dispute between a proposed winery and its residential neighbors.

Trefethen takes visitors behind the scenes with Hands-On Harvest event

Register wine reporter Sam Jones joins a crowd at Trefethen to learn what really goes into that glass of wine you enjoy.

Yountville postmaster bids goodbye to "the post office from heaven."

A funding shortfall is being filled for a planned Vine Trail/Bay Trail segment from the Vallejo ferry terminal to American Canyon.

This image shows how a roundabout might fit in at Highway 29 and Rutherford Cross Road.