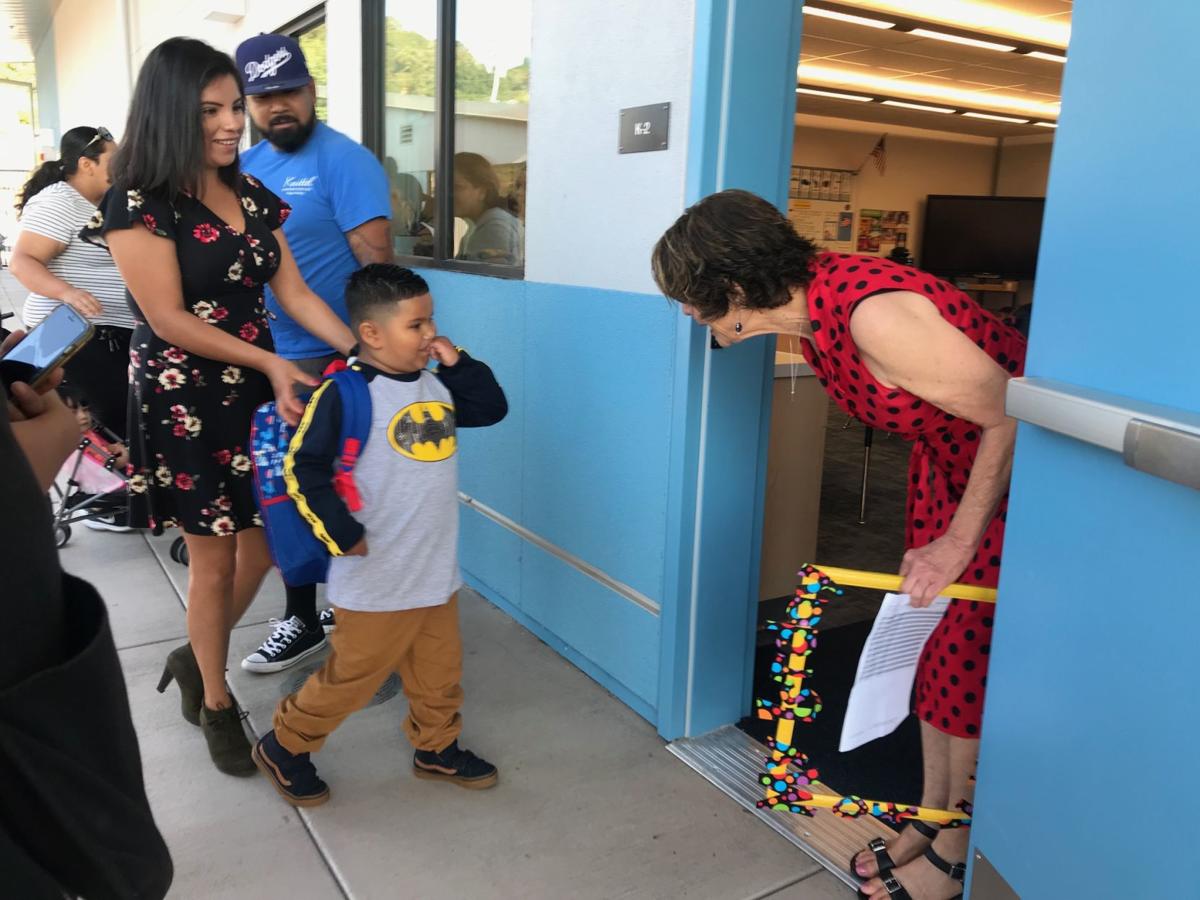 Longtime educator Mimi Ladrigan welcomes a new student to her kindergarten classroom at Snow Elementary School in Napa. Wednesday was the first day of school for the Napa Valley Unified School District. 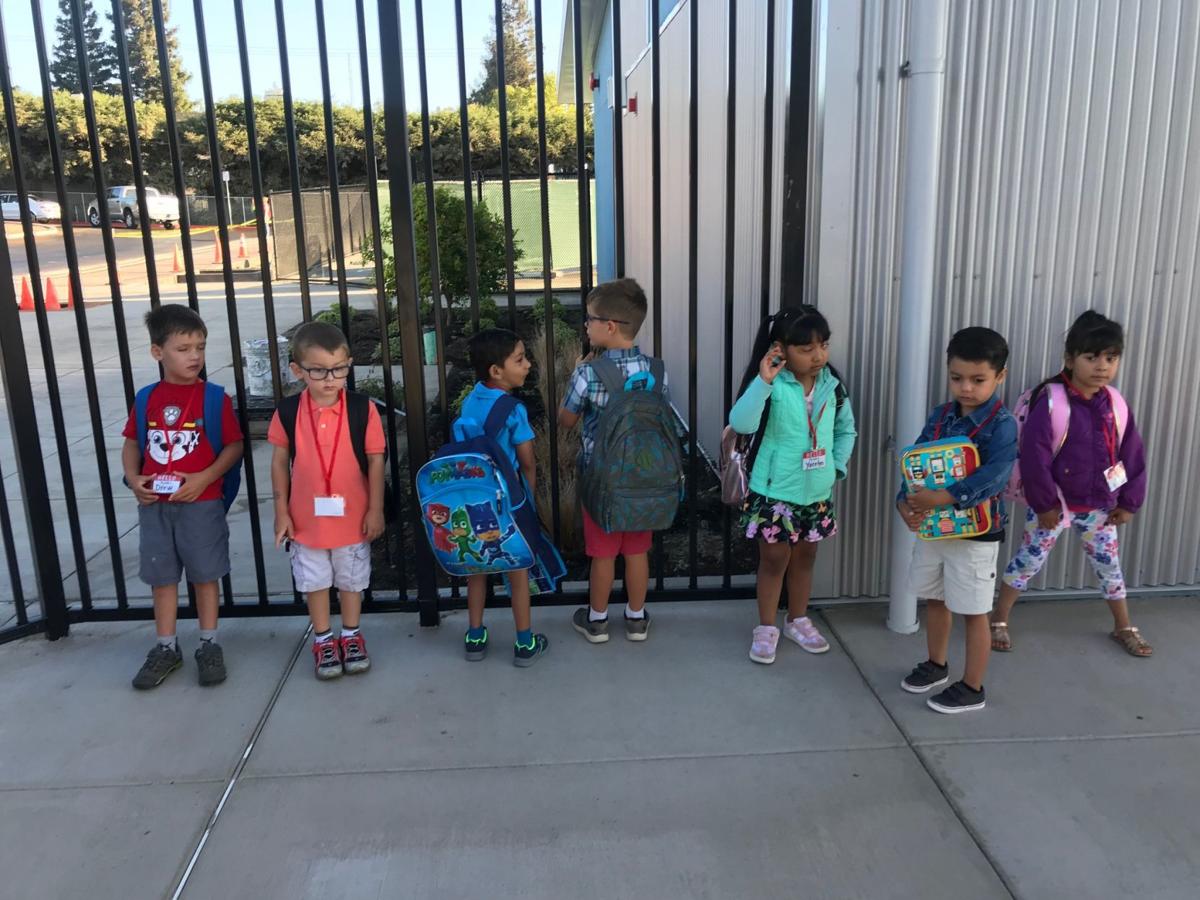 Students wait for the start of their first day of school at Snow Elementary School in Napa. 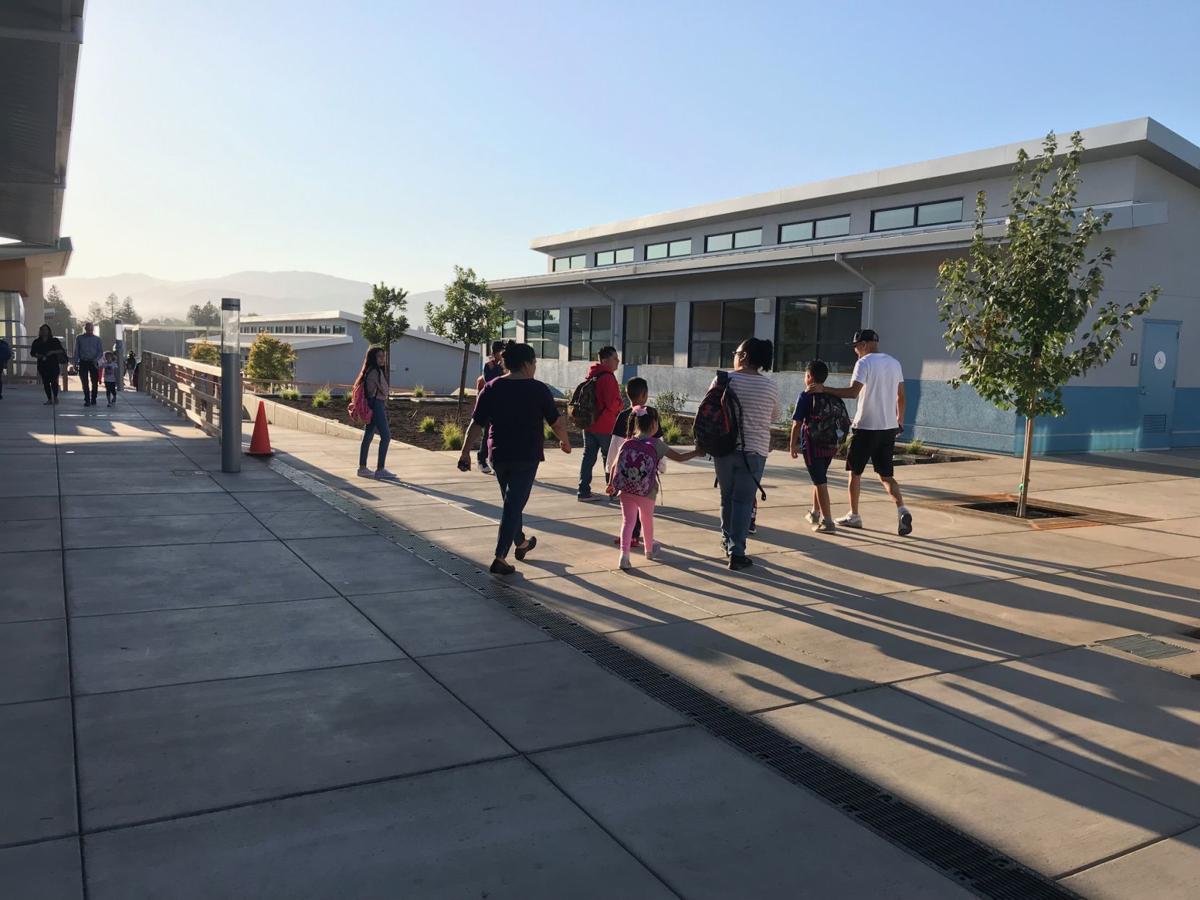 Families and students arrive at the new Snow School campus in south Napa. Wednesday was the first day of the 2019-2020 NVUSD school year.

At 7:36 on Wednesday morning, the long yellow school bus pulled up to the curb of the new Irene M. Snow Elementary School in south Napa.

The folding doors opened and one by one, the students hopped onto the sidewalk at the new campus.

The group of bus riders joined the many dozens other students and parents finding their way to new classrooms and the start of a new school year. Napa Valley Unified School District’s 2019-2020 school year began on Wednesday.

Over the past year, the entire campus of Snow School in south Napa has been completely rebuilt from top to bottom.

The students “are going to absolutely love it,” McCormick-Pippert said. “It’s so different than what we had last year” when the school used portable buildings during construction.

Snow parent Marie Gallegos said her twin daughters – new fourth graders — “couldn’t sleep last night, they were so excited and nervous” about the first day of school. She commented on the new security fencing around the campus. “To me, it’s good,” said Gallegos.

“It’s pretty,” said Litzy Martinez, a new Snow second grader. What is she looking forward to most this school year? “I want to have new friends,” said Martinez.

“I think it’s cool we have a brand-new school,” said her sister Ariana Martinez, age 10. “And we get to see the teachers” and find out who will be leading their classrooms.

“It’s nice,” said Snow School parent Tony Thomson. “It sure beats the portables during construction.” Plus, “there’s more room for them to play.”

Another new fifth grader, Kimberley Saldivar, said she liked the blue painted classroom doors, the lunch tables and the playground. “It’s big,” she noted. Saldivar said in fifth grade she’d like to learn about science; for example, “how to touch the sky.”

As the school start time approached, more and more parents and students arrived, some on foot, some by car. Wearing new backpacks and new school shoes, the children gathered outside their assigned classrooms.

“Are you nervous?” one dad asked his daughter, as he held her hand.

Near the Pre-K and Kindergarten classrooms most students bravely walked into their new rooms, while others were a bit more hesitant.

“Are you ready for your name tag?” one instructor asked a new student. He shook his head and sniffled.

The majority of the work at the 10-acre parcel started at the end of June 2018.

“It’s a proud day for the NVUSD and an even prouder day for Snow school,” said Mike Pearson, assistant superintendent of operational services at NVUSD. “It’s been a long process. Now we’re able to celebrate with the opening of a brand-new school.”

A total of 21 new classrooms, a new multipurpose room with a theater space, an administration building and other improvements are now done. Some work, such as landscaping and other final touches, remains to be completed.

Napa Valley Unified also planned to rebuild two other elementary schools due to their proximity to the West Napa Fault: Napa Junction in American Canyon and Stone Bridge in Napa.

Voters passed Measure H, a $269 million bond issue, in 2016 that provides $100 million for rebuilding the three elementary schools. The bond also has funds to seismically upgrade another dozen school campuses.

A groundbreaking ceremony was planned for Wednesday afternoon at Napa Junction Elementary School, while work at Stone Bridge has yet to begin.

From Our Readers: Back To School in Napa County 2019

It's Back To School time in Napa County. Thank you to our readers for sharing their photos.

Relocation of Napa school from earthquake fault near completion

Over the past year, the entire campus of the Snow school in south Napa has been completely reconstructed from top to bottom. When the work is …

A Napa radio studio’s sign-off this spring will segue into the arrival of construction equipment, after the city’s approval of 14 townhouses t…

Irene Snow Elementary School students will be returning to a much different campus this week than the one they left in June.

Precariously placed near an earthquake fault and a natural-gas pipe, Stone Bridge School may be in line for a new location – again.

A short, sharp jolt of an earthquake was felt in the upper Napa Valley on Friday morning, with the U.S. Geological Survey describing the shaki…

Wounds both visible and invisible remain on the fifth anniversary of the 2014 earthquake that delivered a heavy blow to Napa.

Five years after the Napa earthquake, Irene Snow school celebrated its rebuilding at a Monday ceremony.

Longtime educator Mimi Ladrigan welcomes a new student to her kindergarten classroom at Snow Elementary School in Napa. Wednesday was the first day of school for the Napa Valley Unified School District.

Students wait for the start of their first day of school at Snow Elementary School in Napa.

Families and students arrive at the new Snow School campus in south Napa. Wednesday was the first day of the 2019-2020 NVUSD school year.