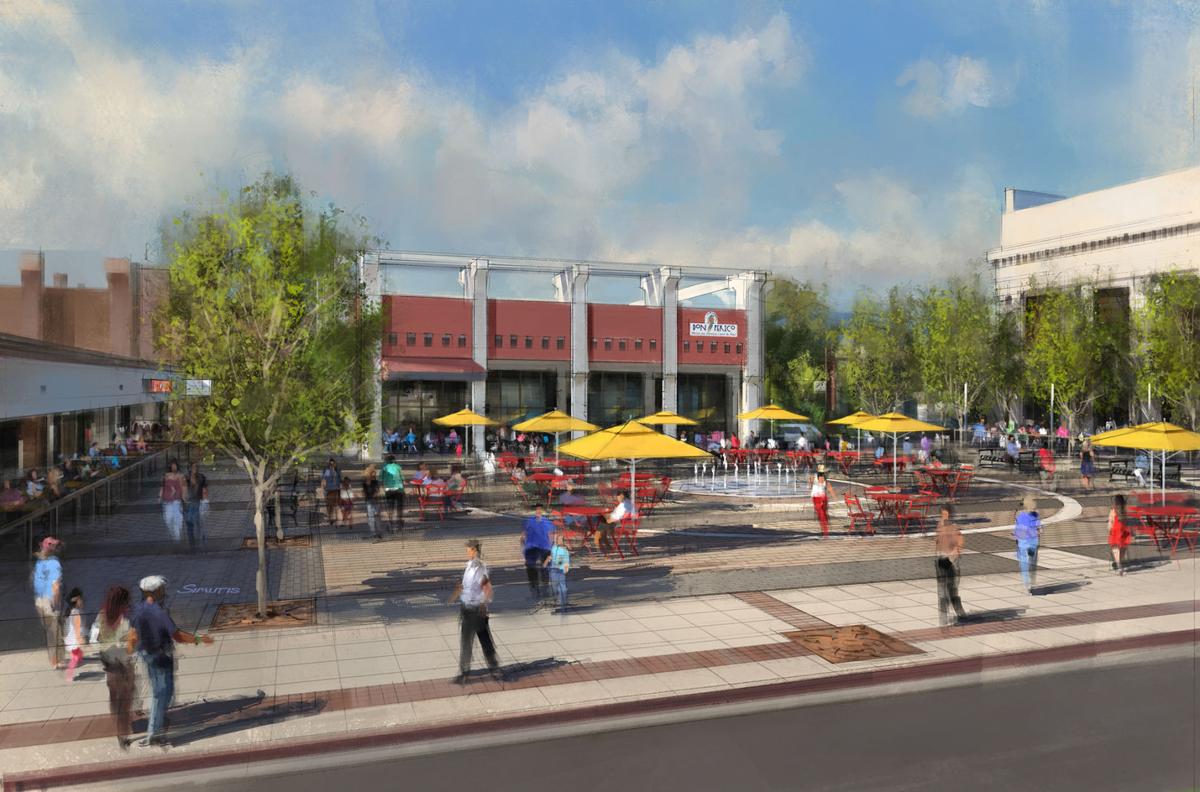 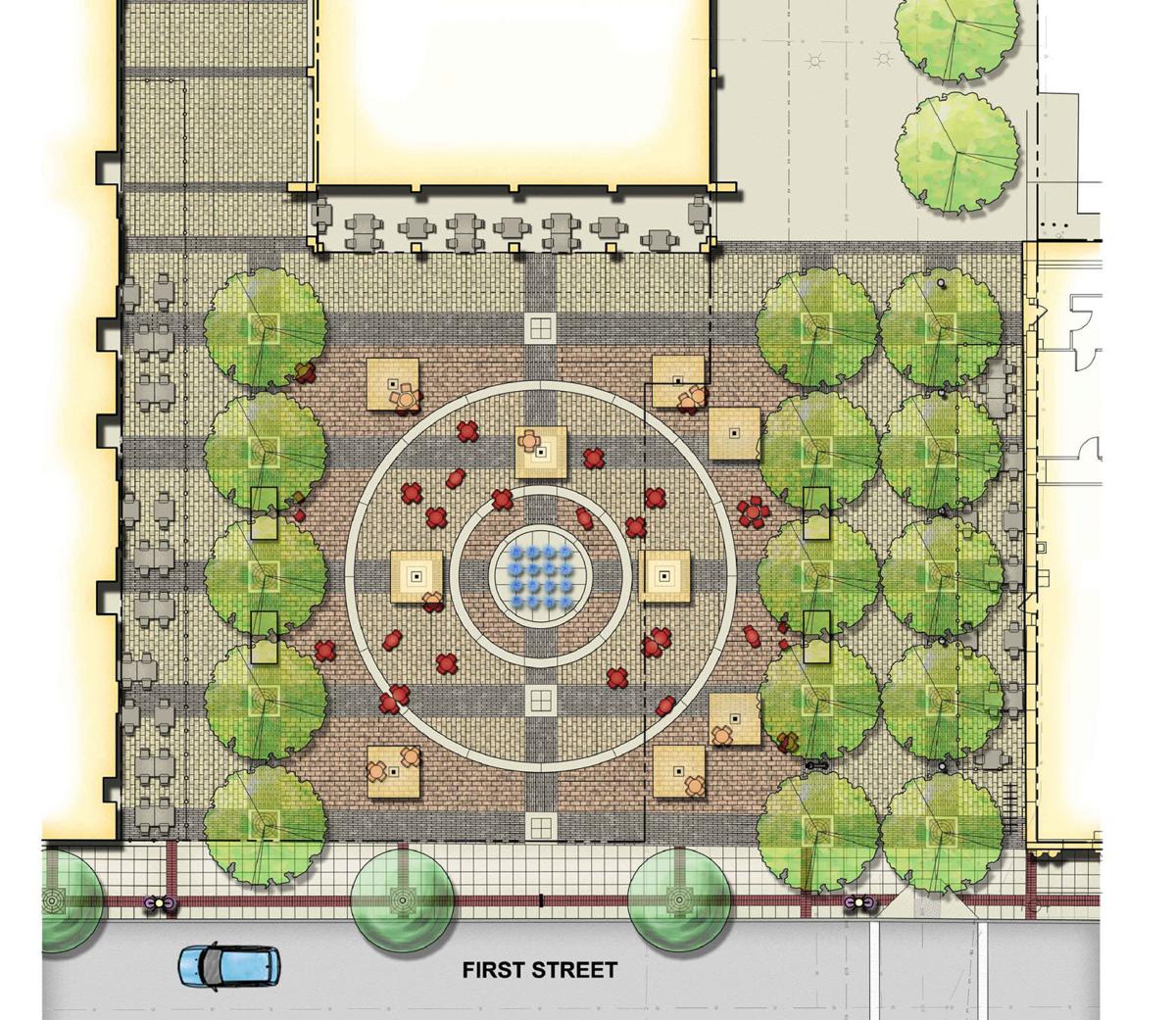 This top-down view of a redesigned Dwight Murray Plaza shows the single-level surface, cafe-style tables, flush-mounted fountain and new tree plantings that are planned for the public square on First Street.

This top-down view of a redesigned Dwight Murray Plaza shows the single-level surface, cafe-style tables, flush-mounted fountain and new tree plantings that are planned for the public square on First Street.

Its derided clock tower has long since been pulled down, the fountain turned into a planter and a seating pit has grown mostly empty. But after more than 40 years, Dwight Murray Plaza is inching closer to a new look and new life in downtown Napa.

After months of planning, discussions and public forums, designers on Wednesday released a proposal for the First Street plaza’s most radical transformation since its mid-1970s opening.

Out would go the square’s disused fountain, brick-like pavement and other remnants of its dated styling. In their place would come a single-level surface with room for larger public events, along with with café-style tables and chairs, new shade trees and a walk-through, flat-surface water feature.

The proposal by Oakland-based Bottomley Design & Planning won wide praise from the city’s Parks and Recreation Advisory Commission, which agreed to send it to the City Council for its blessing. The council will vote on the Dwight Murray Plaza overhaul as early as May 17, according to Rick Tooker, director of the Community Development Department.

City officials hope to start the $1.5 million upgrade in October and reopen the square in the first half of 2017, near the expected opening date of the Archer hotel to the west.

After leveling the seating pit, Napa would clad the single-level surface with paving blocks in a brighter three-tone pattern, including vertical and horizontal cross-hatch lines. Concentric circles would frame a central fountain with multiple 2-foot-high flumes, set flush with the surface to allow children to run through the water – and allow city workers to turn off the fountain and use its flat face for event space.

Besides improving the plaza’s beauty, the water feature would give Napans a landmark and sense of place that have been missing since the removal of the clock tower, said Phil vanderToolen, a Napa landscape architect consulting with the city on the project.

“You could say, ‘Meet me at the fountain,’” he told parks commissioners. “There’s no place else where you will see this. Everyone will know what you’re talking about.”

About nine movable metal tables shaded by parasols would adorn the plaza, with matching chairs for about three dozen people. This outdoor furniture would be removed for public gatherings and locked down overnight to prevent theft, said John Coates, city parks and recreation director.

The plaza also would gain LED bulbs for the fountain and atop 14-foot-tall light standards, which designers said would make the area more appealing both to pedestrians and those visiting restaurants facing the square.

Three rows of plane trees – about 40 feet tall at maturity – would be planted at the square, one row on the west side and two to the east, with two fixed benches added on each side beneath the tree canopies.

The project outlined by vanderToolen and Terry Bottomley, urban designer for the Bottomley firm, forms a near-total break from the principles that guided the public square’s creation.

When it debuted on Independence Day 1974, Dwight Murray Plaza was intended to become Napa’s prime public gathering spot in a renewed and modernized downtown, and the city lavished on its public square a waterfall-style fountain and a four-sided, 70-foot-tall clock tower atop timber crossbeams. Stucco-lined buildings along the square became home to the Carithers and Mervyns department stores, seemingly guaranteeing a constant flow of visitors and activity.

Time, however, has been unkind to the plaza’s design and to the plaza itself. The city eventually took down the clock tower after years of erratic timekeeping and complaints about its styling. Repeated soap dumping and other acts of vandalism forced the fountain’s shutdown, and the square’s cramped, stepped surface has cut into the available space for fairs, concerts and large-scale gatherings, which have gravitated to Veterans Memorial Park or directly onto closed-off downtown streets.

In revamping and leveling the plaza, designers and city officials hope to ease access across the space while adding shade and creating more comfortable seating. The new-look square also is intended to complement the reboot of another 1970s-era downtown creation – the Brown Street pedestrian walkway, which like the plaza is adorned with red brick and has become largely ignored by visitors.

Restoration plans for the Brown Street promenade, which will require funding separate from that for the plaza, would replace its heavy tree cover with new plantings in two rows beside a wide, airy center section with room for the booths and stands of a street fair. The layout is expected to reduce the number of street closures needed for downtown festivals.

Parks commissioners readily accepted the modernized plaza, but asked planners to ensure passers-by will not lose sight of its historic ties.

Kimberly Menager urged the city to keep the site’s horn-loudspeaker monument – which memorializes Peter L. Jensen and Edwin S. Pridham’s invention of the modern speaker in Napa in the 1910s – as close to its current site as possible. Meanwhile, Mark Lucas spoke for other commissioners in seeking a new plaque at the square to keep alive the story of its namesake.

“Dwight Murray Sr. was my doctor when I was a little kid,” he recalled of the longtime Napa physician and former American Medical Association president, who died in 1974. “He was a great man and a great doctor. I’d like to have something in the plaza so that people can walk in and actually see something that shows why this man was important.”

Dwight Murray Plaza, the centerpiece of the city’s first stab at urban renewal, was dedicated on July 4, 1974, before an enthusiastic crowd.

Napan's will say meet me at the water fountain to do what? Watch the tourist hike up and down to their hotels. Hopefully they don't plant the same trees as they do along the sidewalks we can't afford to replace?????

Personally I do not find the yellow umbrellas and red tables appealing, reminds me of a McDonalds or Shell station.... how bout red umbrellas with dark metal or bronze or wood tables, (even dark green) something wine country-esque instead of flimsy bold modern ikea yuck...

Sounds good, I look forward to the remodel ... Can someone please do something about the completely ugly building across the street?

Seems very much like a suburban shopping mall. Not very creative. We can do better.

I agree, looks pretty vanilla. We can do better.

And the City of Napa can't afford to replace streets??? Hmmm, but let's make it beautiful for the new motel coming in? Doesn't make sense to me