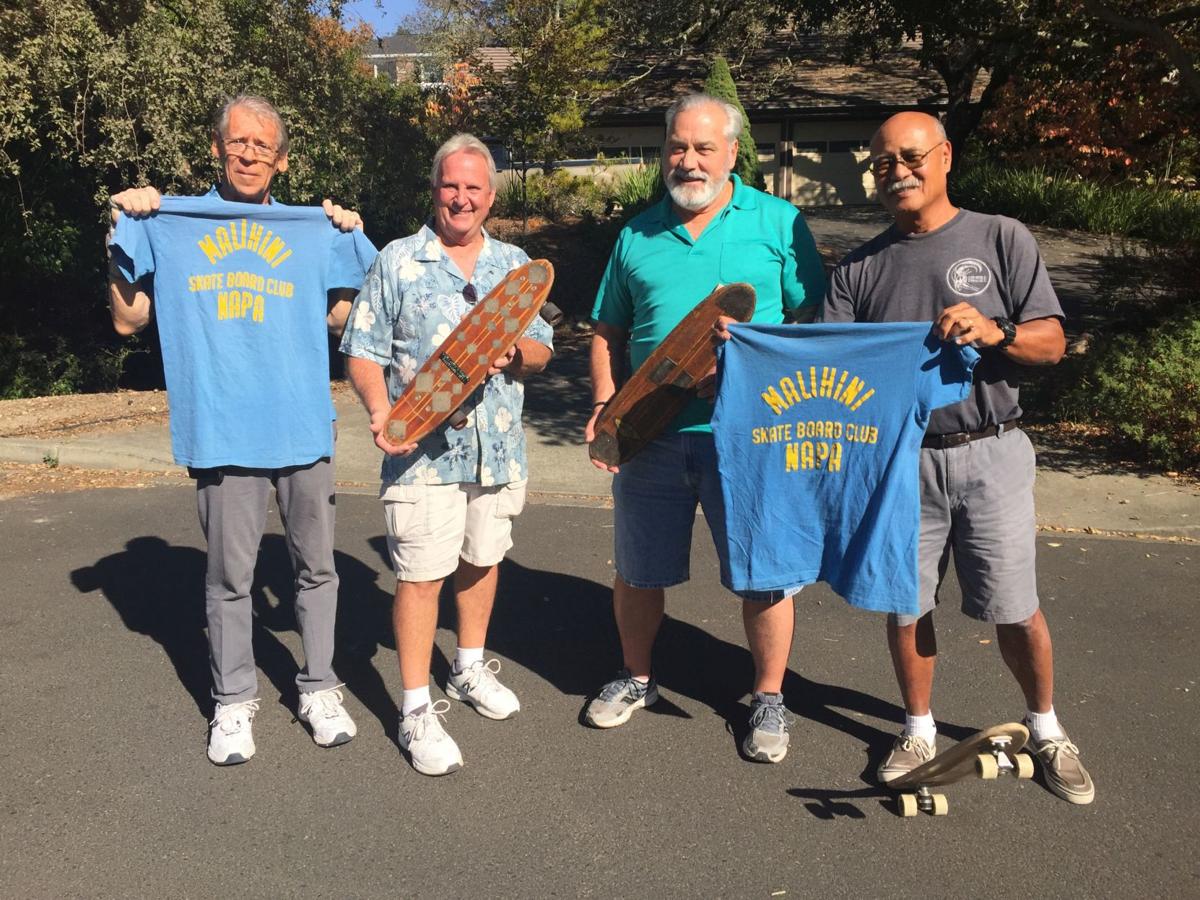 Members of the Malihini Skate Board Club gather in Alta Heights to share memories. Left to right, Will Koepp, Richie Ward, Sam Kresge, and Mel Owyeong. 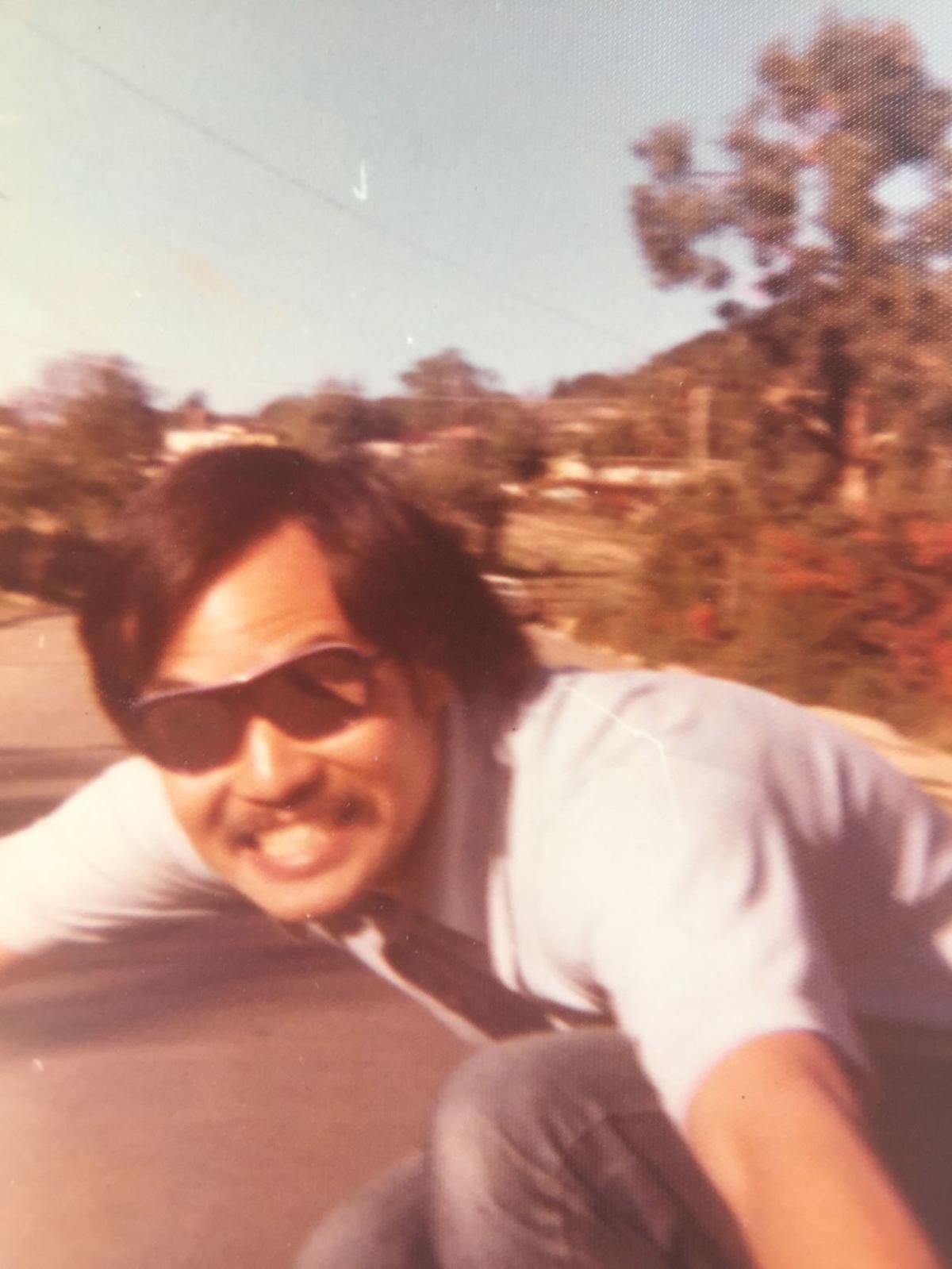 Mel Owyeong blasts down an Alta Heights hill on his skateboard in the 1970s. Owyeong was one of the charter members of the Malihini Skate Board Club. 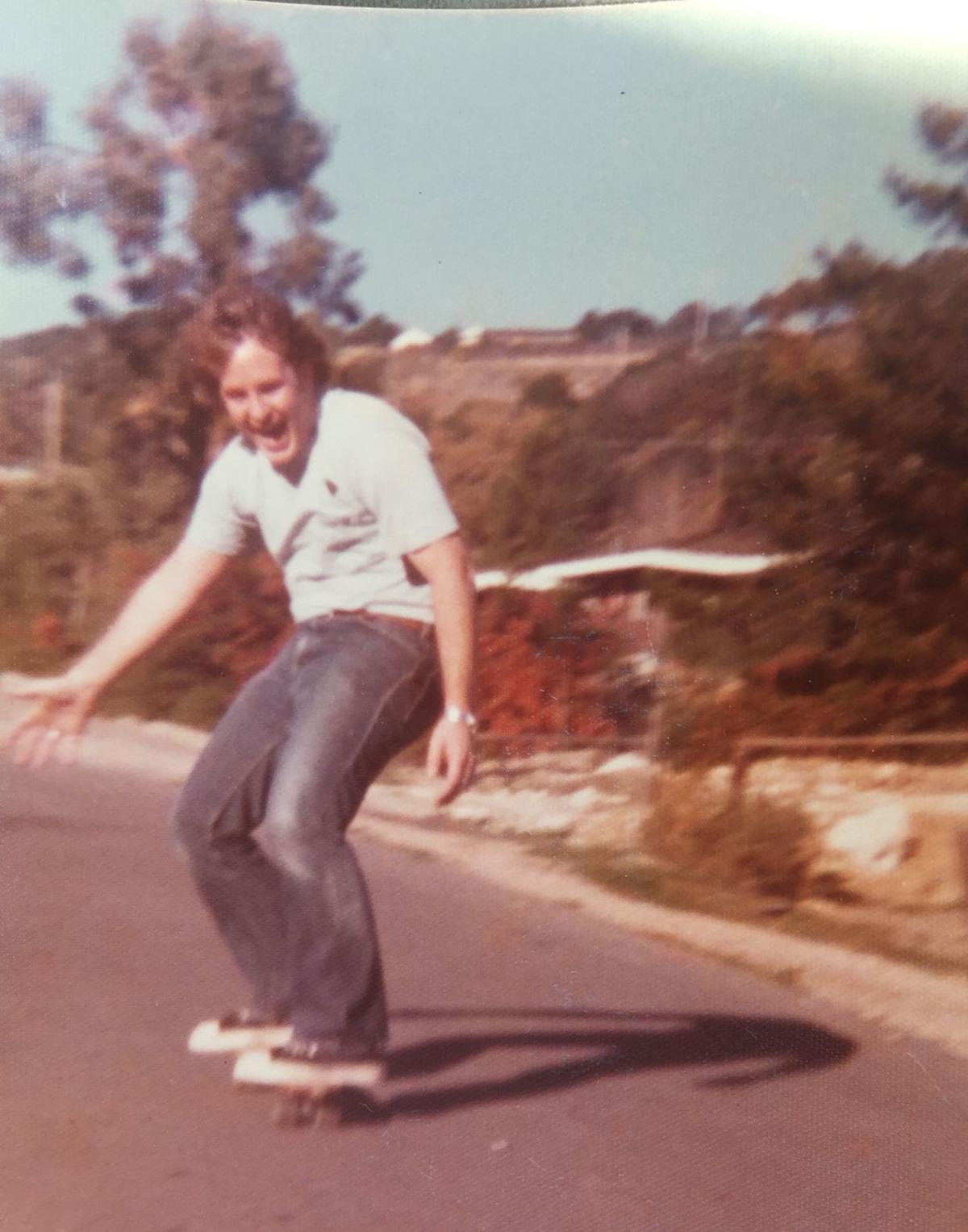 Richie Ward shows off his skateboarding moves on an Alta Heights street in a photo from the 1970s. 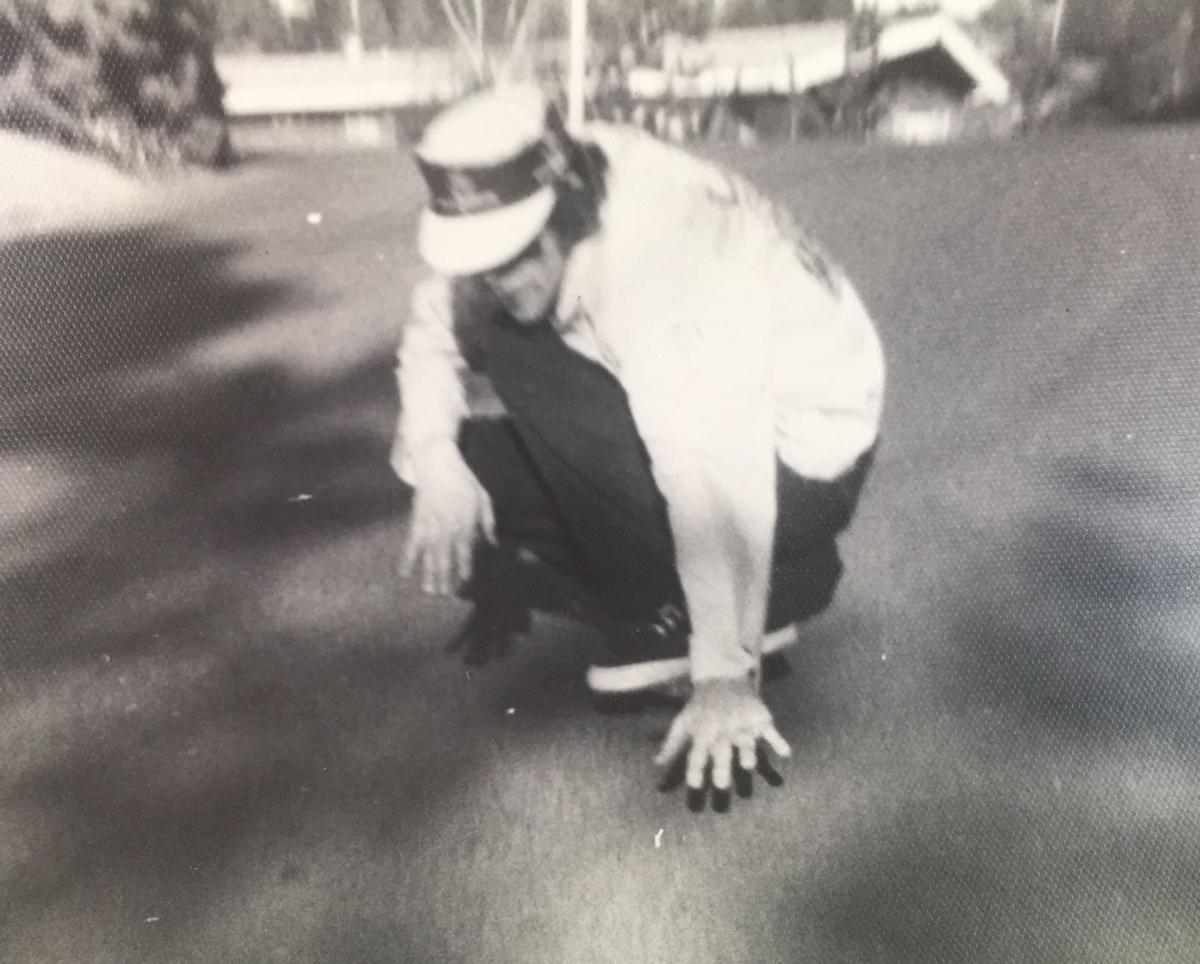 Will Koepp goes low on his skateboard back in the 1970s on a Napa hill before he moving to Sacramento and turning pro and racing competitively for several years.,

If you lived on or near a hill anywhere in Napa in the 1960s, chances are you saw members of the Malihini Skate Board Club doing their thing.

Four original members of the club — Will Koepp, Sam Kresge, Richie Ward and Mel Owyeong — recently gathered in Alta Heights on one of their favorite roads to recall memories from the good old days.

Owyeong said he started skateboarding around 1964 as something to do. As was the case with most skateboard enthusiasts of the day, he recalled his first skateboard was fairly primitive.

“It was just a board with some metal roller skating wheels attached to the bottom,” Owyeong said. “Eventually I graduated to a board with clay wheels and that’s when me and some friends started skateboarding all over Napa including places like Alta Heights, Old Sonoma Road, or our most famous run, Oakville Grade.”

He added that one time, after avoiding a car, he had to skateboard straight down the hill and was lucky to survive.

“My friends all thought I was dead for sure,” he said with a laugh.

“After we formed the Malihini Skate Board Club and we got better, I invited the Hobie Skate Board Team from Berkeley to come up to Napa and compete against us on a slalom course,” Owyeong said. “And believe it or not, we beat those guys and they were in total shock. I’ll never forget that. Two members of that Berkeley team were later inducted into the California Skate Board Hall of Fame.”

Another member of the original club, Sam Kresge, also recalled beginning with roller skates nailed to a board.

“Later, I upped my game by putting a piece of carpet on my board and riding it barefoot. Very high class,” he joked.

“When I went to Redwood Junior High, I met Mel, Will and Richie and we started coming up to Alta Heights to skateboard on days we didn’t have school,” said Kresge. “The neat thing about skateboarding was that it brought us all together and we became really good friends.”

Unfortunately for the club members, they all lived in the flatlands of central Napa and would have to travel on their skateboards a long ways before finding hills.

“We didn’t have cars, so we would come all the way across town our boards and then skateboard all day before riding back home,” he said. “That was just normal for us.”

The team members were fearless in those days and never wore elbow and knee pads or a helmet.

“I remember riding on the shoulders of one our guys and it never occurred to me that if he fell, I was going to really get hurt,” Kresge said. “We would also try and jump over barriers and land back on our boards, that was hard on the elbows when you didn’t make it.”

“Then we got together with Mel and Will, and we would skateboard to Alta Heights every Saturday like clockwork. It was an all-day thing. Eventually we had 12-15 guys who would show up,” he said.

Ward also has vivid memories of hurtling down Oakville Grade, when team members had cars they could use to get there.

“I remember when we would all slalom down Oakville Grade we would be in both lanes, and if a car came up behind us, we would move over. One day when this happened, the car behind us turned out to be a California Highway Patrol,” Ward said. “I jumped off my board thinking that I was going to be in big trouble, and what was I going to do.”

Instead, the officer complimented the team on their riding skills and asked if he could watch.

“He even offered to give us a ride back up with hill when we got to the bottom,” he added.

But it wasn’t always a happy ending on the road that’s famous for sharp turns and a steep descent.

“One time, I wiped out coming down on Oakville Grade and I was covered in blood,“ Ward recalled. “Fortunately, a lady who lived at the bottom of the hill patched me up.”

Will Koepp was the earliest of the group to begin skateboarding, beginning in 1959. Koepp also stayed with the sport the longest, eventually turning pro and skateboarding until he stepped of his board for good in 1999.

After moving to Sacramento in his 20s, Koepp began teaching skateboarding through the many skateboard shops in the area, and also began racing competitively in the downhill, slalom and luge races. Luge, he explained, is where you ride a board specially made so you can ride down a course feet first, while lying on your back.

He also said he could jump over up to three boards while performing something called a “v-sit,” a trick that he’s seen only one other skateboarder do.

Koepp, like others on his skateboard team, was also a victim of the treacherous Oakville Grade.

“I wiped out when one of the clay wheels on my board exploded from the heat,” he admitted.

The club members are older and wiser now, and understand the dangers of the sport, particularly for guys in their late 60s. Speaking for other members, Kresge said: “I don’t want to fall and get hurt; plus, my wife won’t let me.”

From chrome-tipped nose to rounded tail, Steve Pierce’s 1940 Buick Super coupe is an example of the Napa native’s passion for restoring vintag…

Members of the Malihini Skate Board Club gather in Alta Heights to share memories. Left to right, Will Koepp, Richie Ward, Sam Kresge, and Mel Owyeong.

Mel Owyeong blasts down an Alta Heights hill on his skateboard in the 1970s. Owyeong was one of the charter members of the Malihini Skate Board Club.

Richie Ward shows off his skateboarding moves on an Alta Heights street in a photo from the 1970s.

Will Koepp goes low on his skateboard back in the 1970s on a Napa hill before he moving to Sacramento and turning pro and racing competitively for several years.,