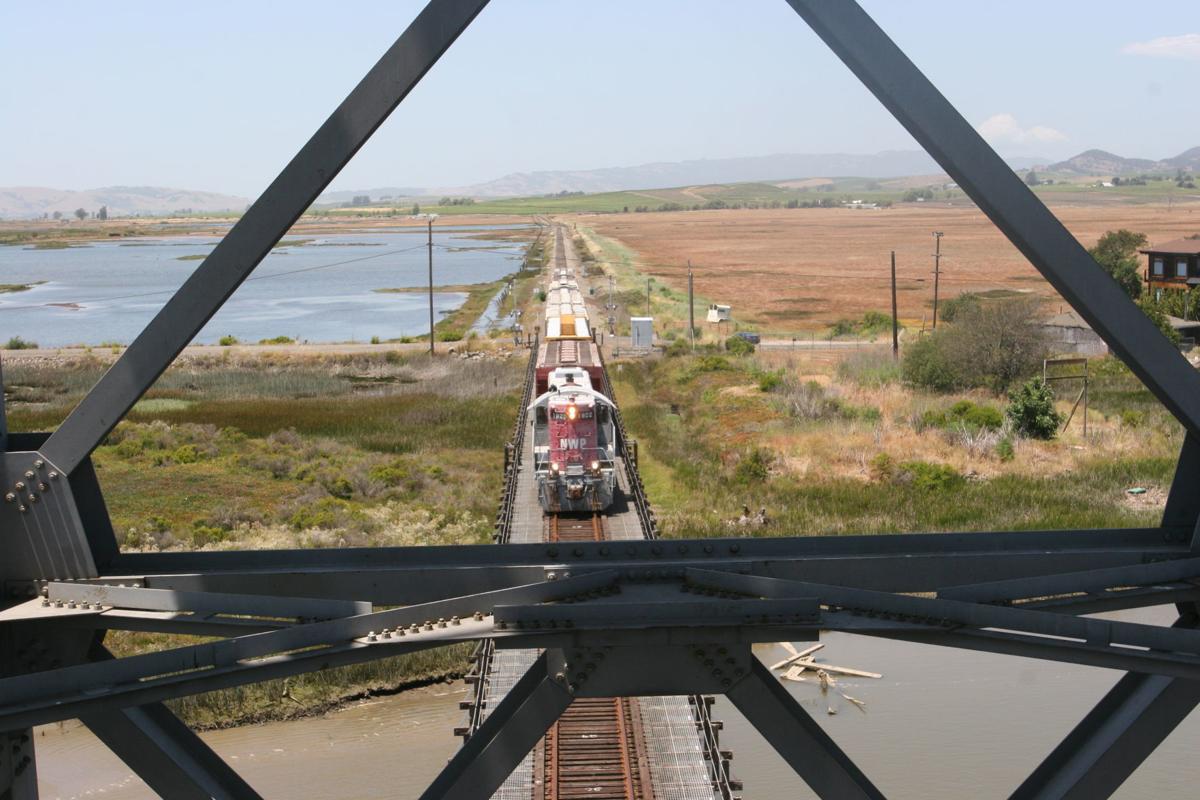 One option for dealing with sea level rise for Highway 37 is to relocate the highway through Napa County along the Sonoma-Marin Area Rail Transit railroad tracks. This view from the Brazos Bridge near Milton Road shows the route through southwest Napa County. 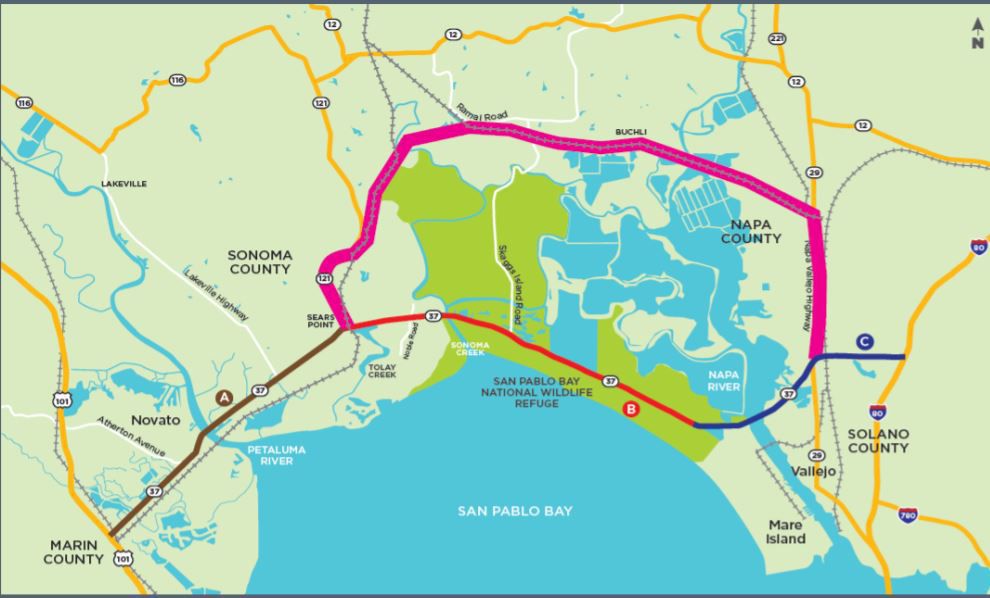 A map of a possible northern alignment for Highway 37 through Napa and Sonoma counties.

One idea to save Highway 37 along San Pablo Bay from predicted sea level rise is moving a section north to drier land along a new route through American Canyon and rural southwest Napa County.

That looks to be a long shot. Transportation officials usually talk about keeping the Highway 37 section from Vallejo to Sears Point along the same route and elevating it on an embankment or causeway.

But state environmental laws require the exploration of alternatives. At a July 20 meeting, the State Route 37 Policy Committee of Caltrans and regional officials touched on the northern inland route option through southern Napa and Sonoma counties.

Highway 37 from Vallejo would head north along Highway 29 through American Canyon. It would cut west following the lightly traveled Sonoma-Marin Area Rail Transit train tracks through the Carneros region. It would take Highway 121 south to Sears Point and rejoin the existing Highway 37 alignment west to Highway 101.

The idea received a cold reception from the Highway 37 committee.

“Can’t we stop looking at that as an alternative for Highway 37?” Solano County Supervisor Erin Hannigan said.

“Putting the additional traffic on Highway 29 is going to require fairly substantial improvements to Highway 29 as well,” Kevin Chen of the Metropolitan Transportation Commission told the committee.

“I don’t think it’s feasible,” Ramos said after the Highway 37 meeting. “We’re all here to solve the Highway 37 concerns and not to create new ones for Highway 29.”

The western journey for a relocated Highway 37 along the SMART tracks would pass by the Milton Road community. This is a stretch of rural homes and properties behind a levee along the Napa River far from the hustle-and-bustle of local cities.

With a northern Highway 37 relocation, what seems like the middle of nowhere would become traffic central. John and Judy Ahmann dislike the idea.

“It’s going to go along my whole property,” Judy Ahmann said in a phone interview. “The railroad track’s my southern boundary. Frankly, I think the Milton Road people would be horrified. That’s something I wouldn’t like to see.”

Rather, she said, use the SMART tracks for passenger rail service without having an adjacent, new highway.

“That makes total sense,” she said. “We like that idea. That’s not a problem with us.”

Caltrans did focus groups with 62 Highway 37 users — including 12 from Napa County — and among other things asked them about the Napa County realignment idea. Participants said that route was too far out of the way and would add mileage and transportation costs, said Becky Frank of Caltrans.

But some see benefits to a Napa County alignment. The present-day Highway 37 route passes through marshes skirting San Pablo Bay. This is an area with state and federal wildlife preserves and rare species ranging from the salt marsh harvest mouse to the California clapper rail.

Moving the highway to Napa County would remove it from an ecologically sensitive habitat, said a report by Common Ground, a group that has designed a vision for the area called the Grand Bayway.

That really unleashes all the tidal dynamics that would be key to the marsh complex, Tom Leader of the group told the Highway 37 committee.

A Napa County alignment could be a less expensive option than building a causeway along the current Highway 37 route. Sixty-three percent less of the highway would go through refuges, the Common Ground report said.

Still, Common Ground called itself “alignment agnostic.” The many paintings of Grand Bayway possibilities in the report show Highway 37 on a causeway along the present alignment, not in Napa County.

Another alternative alignment for Highway 37 involves shifting it to the south. The highway would cross San Pablo Bay on a bridge, removing the highway from the marshes.

Options for the existing alignment have expanded beyond either an embankment or causeway to include a combination of both. Sections of embankments would make it easier to provide ways for people to reach public access areas in the wildlife preserves.

Chen said the goal is to complete an analysis of the alternatives by the end of the year. The environmental study phase of the Highway 37 project should begin early next year.

This isn’t the first time that Napa County has stood a chance, however unlikely, to land Highway 37. The idea arose in the mid-1930s and to a better local reception.

With the Golden Gate Bridge being built, the state was searching for a new North Bay highway route to help connect San Francisco and Sacramento. The Sears Point Toll Road Co. had built what is now Highway 37 between Vallejo and Sears Point in the late 1920s and the state wanted to buy the road.

But the members of the Carneros Farm Center had another idea. They, in a February 1936 resolution, said buying the toll road would waste taxpayers’ money and that a new route should be built linking to highways in south Napa County.

The state spurned the Napa County route idea, despite interest from some state engineers, and instead bought the Sears Point Toll Road in 1938, creating the present-day Highway 37 alignment.

A new vision for rebuilding flood-prone, traffic-choked Highway 37 calls for also turning the surrounding wetlands of the Napa-Sonoma marshes …

Threatened with rising waters, Highway 37 redesign could mean a toll

Brazos Bridge could be key to busier railroad future

Jake Park saw the distant freight train and brought the electric motors of Brazos Bridge humming to life, an event that could become more comm…

Dodd introduces legislation to rebuild Highway 37 as a toll road

Turning Highway 37 into a toll road is necessary to save it, state Sen. Dodd said Friday.

One option for dealing with sea level rise for Highway 37 is to relocate the highway through Napa County along the Sonoma-Marin Area Rail Transit railroad tracks. This view from the Brazos Bridge near Milton Road shows the route through southwest Napa County.

A map of a possible northern alignment for Highway 37 through Napa and Sonoma counties.