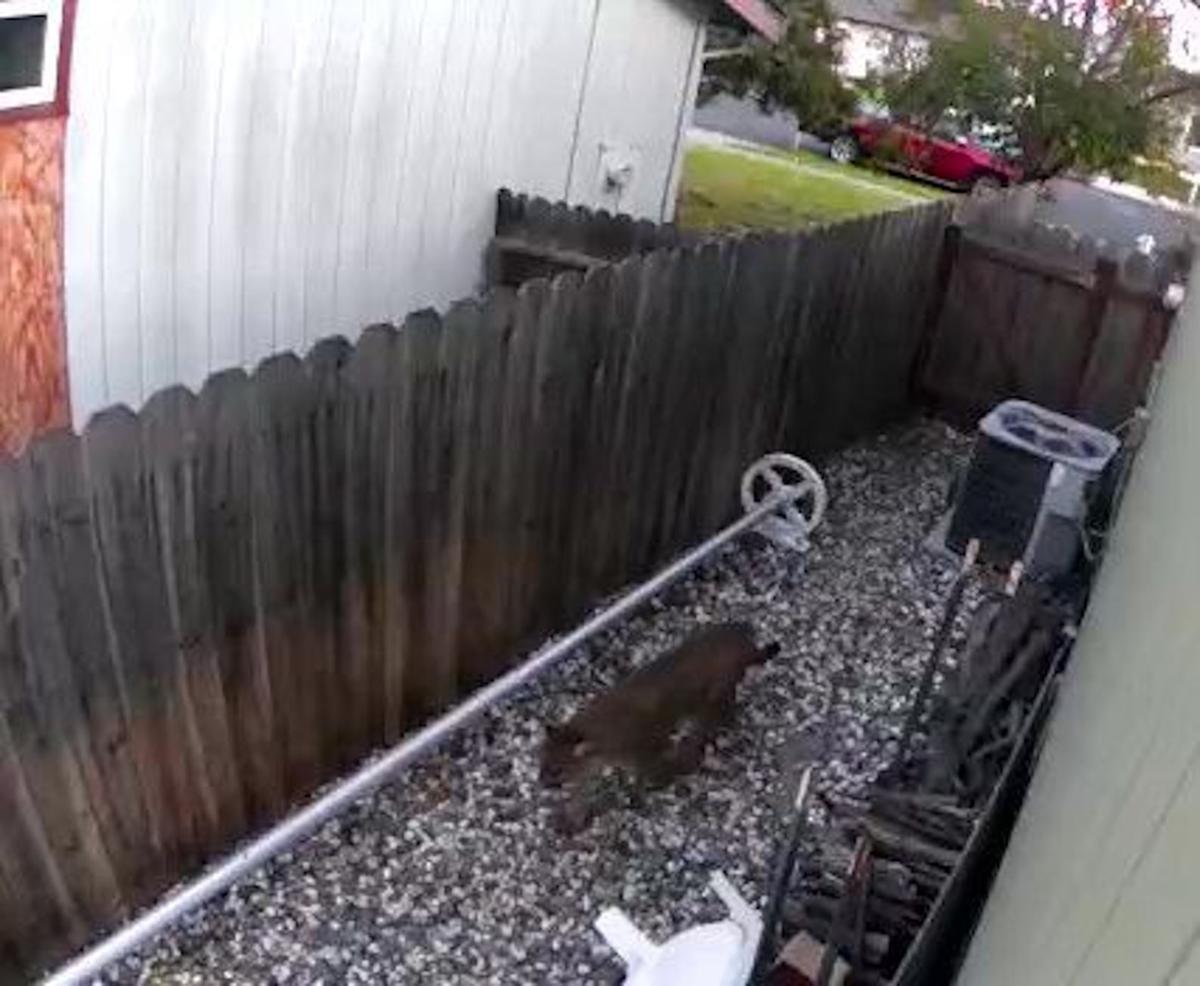 This still image of a mountain lion was captured by a security camera on Saturday. The house is located on Jacob Court in Napa. 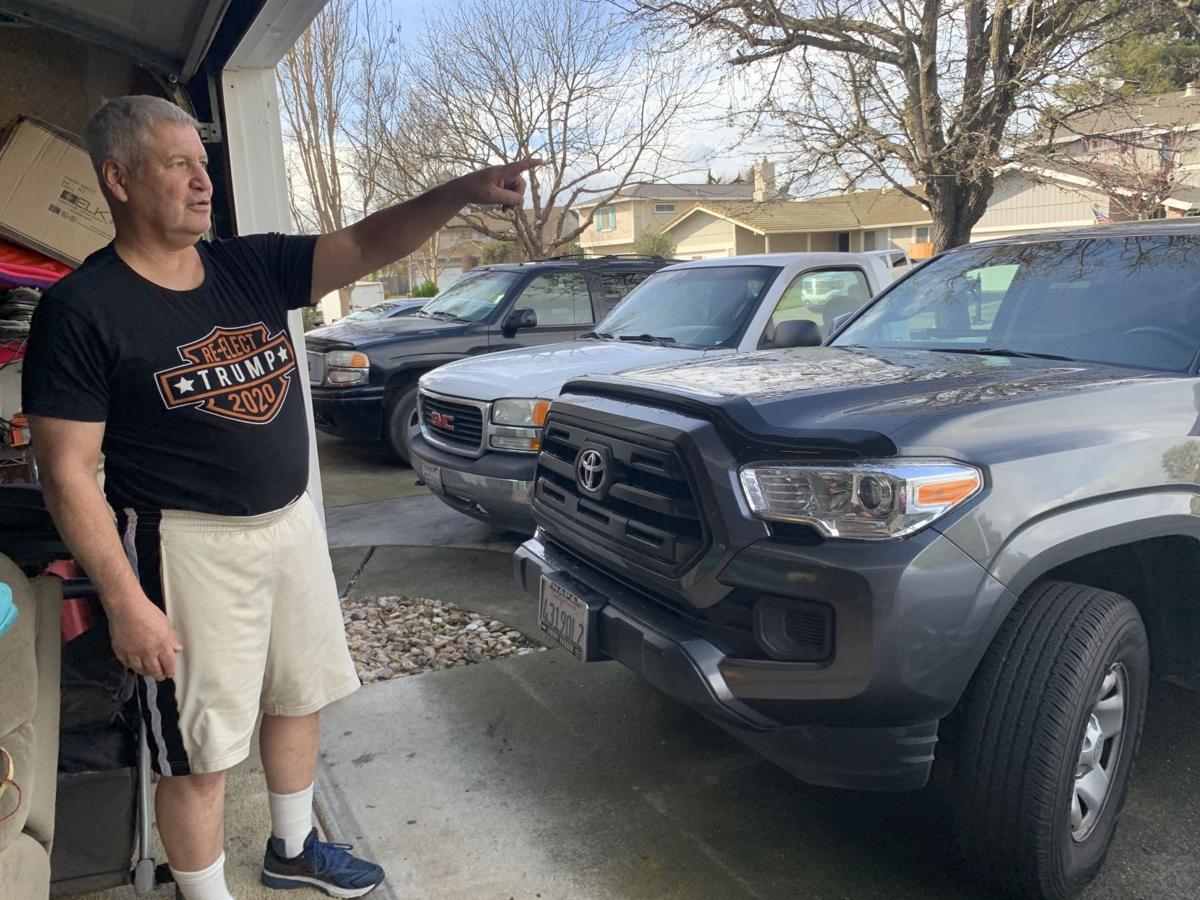 Jim Hosp of Jacob Court in Napa points to where he saw on Saturday a mountain lion run from his driveway to a neighboring home. Wildlife officials could not find the animal. 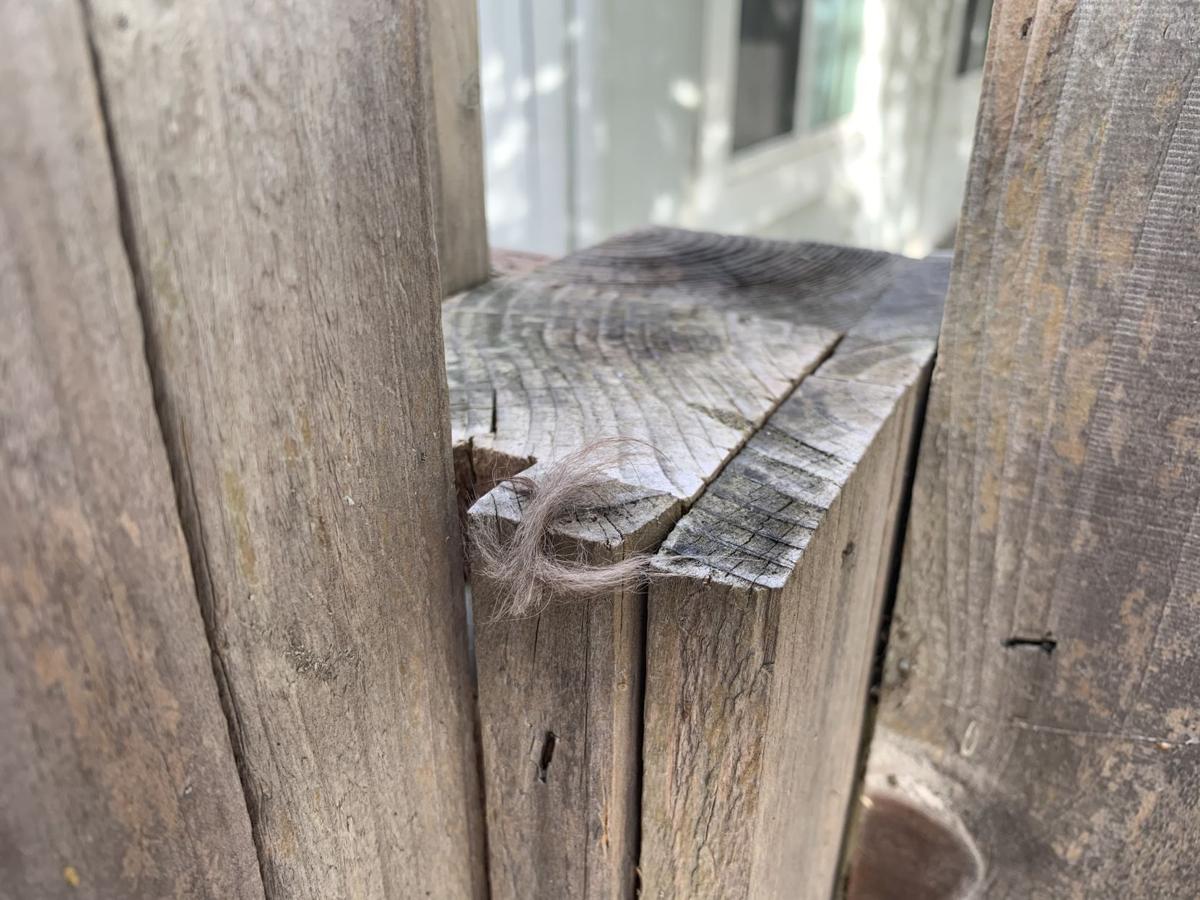 A tuft of mountain lion hair got stuck on this part of a fence on Saturday on Jacob Court in Napa. 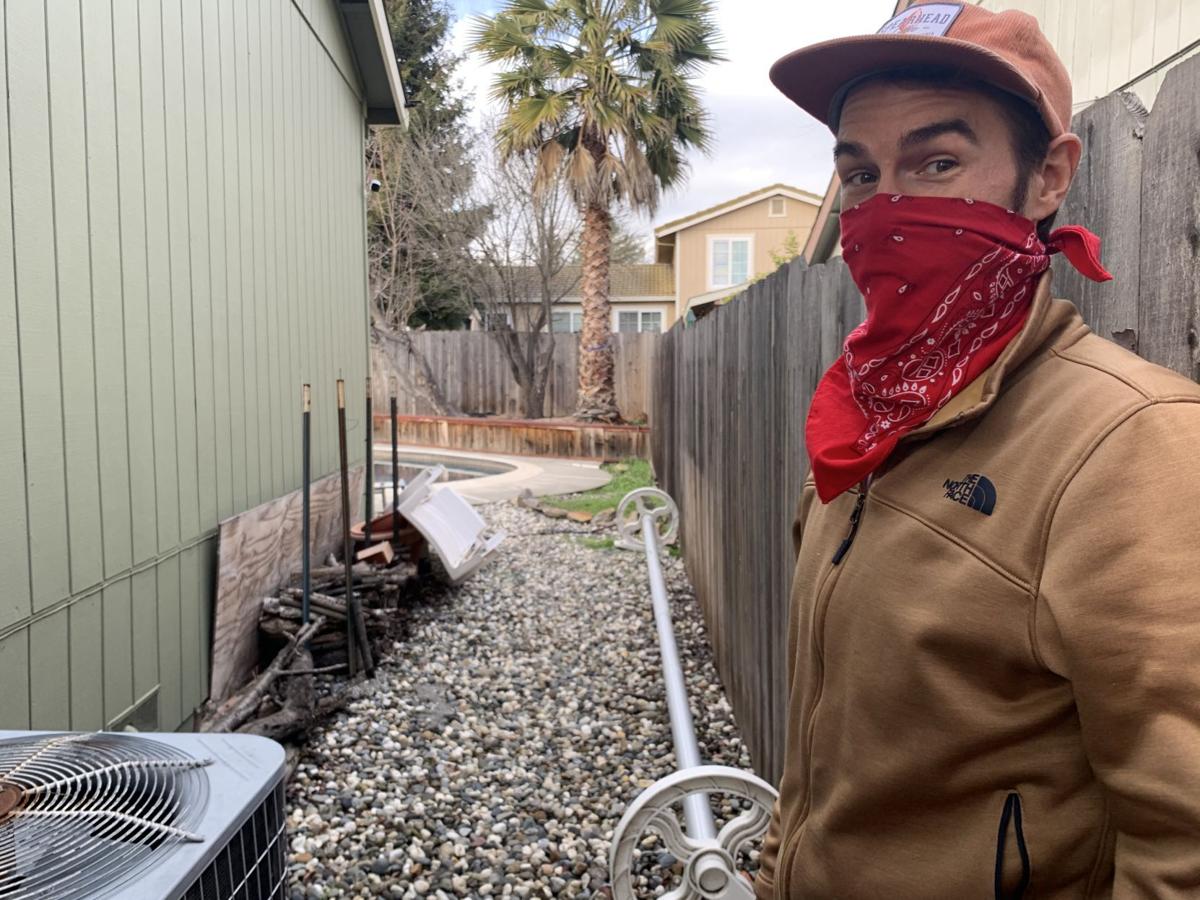 Andy Chambers at his home Jacob Court. Both neighbors and a camera saw a mountain lion on the block on Saturday.

It was late Saturday afternoon on Presidents’ Day weekend and Jim Hosp had just stepped onto his Napa driveway to join his grandkids playing outside.

That’s when he saw it.

A mountain lion. Crouched — and no less than six feet from him.

“It scared the crap out of me,” Hosp said. “Am I really seeing what I’m seeing?” he wondered.

Then the creature hissed at him.

Hosp yelled for the kids to stop running around and go inside. By then, his son-in-law had spotted the mountain lion, now hiding underneath Hosp’s truck on Jacob Court. That’s near Central Avenue.

“It was big,” Hosp said of the animal. “Way bigger than a big German Shepherd and thicker than a Great Dane.”

The creature then ran across the street and briefly sat down on a neighbor’s front porch, just “like it belonged there,” said Hosp.

The lion then jumped over the fence, into neighbor Andy Chambers’ backyard “like it was no big deal,” said Hosp’s daughter Ellie. She described the mountain lion visit as “bizarre and crazy and kind of unrealistic.”

A security camera at Chambers’ house captured just a few seconds of the lion padding into the backyard. In the video, you can hear the lion’s paws crunching on the gravel and the sound of Hosp and his family yelling in the background.

Ed Morton, a game warden with the California Department of Fish and Wildlife, said that he got a call about a mountain lion sighting in Napa. He arrived at Jacob Court about 6 p.m. on Saturday.

He wasn’t sure what he’d find.

“We get calls like that and the majority of the time they are not lions; they are bobcats or orange tabbies or coyotes,” said Morton.

Regardless, “We always want to take people serious because lions can be scary.”

After talking to Chambers, seeing the video, and spotting some mountain lion hair on the fence, he was convinced.

“I was surprised,” said Morton. “It’s not common for lions to be in the city like that.”

He suspects the lion was either lost or looking for food.

Mountain lions (also known as cougars or pumas) can prey on people’s domestic pets, he noted. “For the most part, attacks on humans are really rare,” said Morton. They can be dangerous but for the most part they don’t want anything to do with us.”

Yet we do live in a rural county, Morton pointed out. “Napa is surrounded by mountains.”

He thinks it’s possible that wild animals wandering along creeks can get turned around and end up in a populated area.

“And with fires we’ve been (seeing) animals pushed out of the hills” because there is less food available, said Morton.

After searching the area on Saturday night, the Jacob Court mountain lion could not found.

“We haven’t spotted the lion since that night so it’s my belief it made its way back up into the hills where it’s supposed to be,” said Morton.

This isn’t the first time a wild animal has been sighted in the area.

In June 2019, less than a mile away on Pueblo Avenue, a black bear wandered into a nearby neighborhood. That bear climbed a tree where a crowd gathered below it. The bear had to be tranquilized and relocated.

Morton wonders if such wild animals might be traveling inside large storm drains that run into the Napa River.

Andy Chambers has lived at his home on Jacob Court for about six months. He wasn’t overly alarmed about the mountain lion visit, he said.

“It seems intimidating because it’s a big cat.” But the truth is, “They’re very scared of us.”

Chambers works in the natural resources industry and spends a lot of time outdoors. If you encounter a mountain lion “just clap your hands” to alert the animal, he said.

“Of course, if you’re being attacked there’s a different protocol.”

Neighbor Tracy Egbert lives on Central Avenue which is near Jacob Court.

She’s seen deer and raccoons around her home before, but never a mountain lion.

“It’s scary,” Egbert said. “I mean, I leave early in the morning and now I have to look for a mountain lion?”

“I have no idea” what could have attracted it, said Egbert. Did it come from the river trail area? And the animal somehow crossed Soscol Avenue? “That’s a busy street,” she noted.

Neighbor Ethan Pham, who lives on Jacob Court, said he heard something about a mountain lion on his block but hadn’t seen the video yet so he wasn’t sure how credible the story was.

The idea that a mountain had been seen on his block “was pretty amazing and strange at the same time,” said Pham. “I was more surprised than scared.”

A science teacher, Pham said he was more curious about how the creature got into central Napa.

“How on earth did it get this far?” he wondered.

Image of mountain lion in Napa

Andy Chambers and the mountain lion

Andy Chambers and the mountain lion

Wildlife cameras have recorded deer, bobcats and a skunk returning to a charred trail.

American Canyon will use motion-activated cameras to try to detect hidden wildlife at the Newell Open Space and Preserve and the wetlands area.

Here are some places opening for hiking in Napa County during the coronavirus pandemic.

Project Coyote notes that coyote attacks are rare despite the prevalence of the animals in urban environments as their natural habitats are overrun.

This still image of a mountain lion was captured by a security camera on Saturday. The house is located on Jacob Court in Napa.

Jim Hosp of Jacob Court in Napa points to where he saw on Saturday a mountain lion run from his driveway to a neighboring home. Wildlife officials could not find the animal.

A tuft of mountain lion hair got stuck on this part of a fence on Saturday on Jacob Court in Napa.

Andy Chambers at his home Jacob Court. Both neighbors and a camera saw a mountain lion on the block on Saturday.