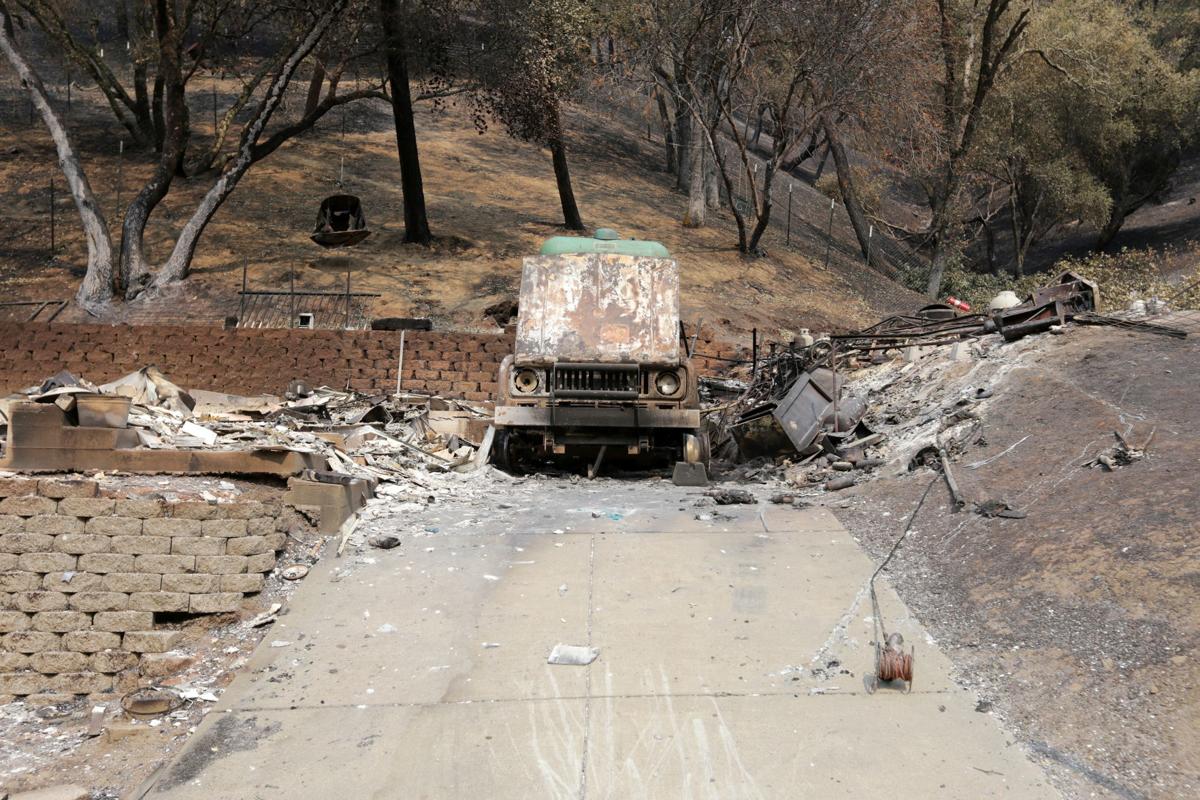 The scorched remains of a Jeep remained in a driveway in the Berryessa Highlands subdivision of Napa County in late August, a week and a half after the Hennessey Fire obliterated the garage and house that had surrounded the vehicle. 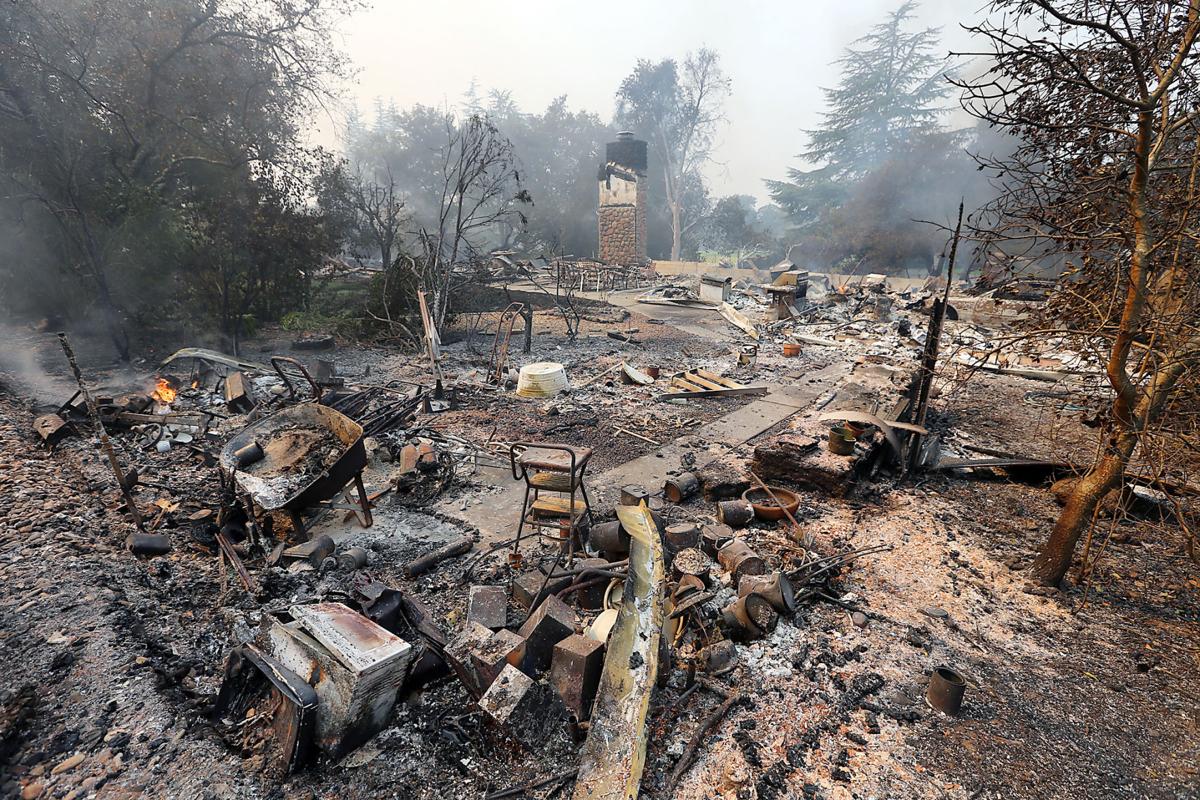 The charred remains of one of the many destroyed homes near Silverado Resort as a result of the Atlas Fire in October 2017.

The Hennessey Fire is the largest fire in Napa County since reliable data became available in 1932 — and it isn’t even close.

That Napa County acreage might drop slightly, since Cal Fire recently dropped the estimated acreage for the Hennessey Fire as a whole by 12,000 acres. But the blaze has still seared itself into the local record books.

As they go about daily life, most people in Napa County won’t see Hennessey Fire devastation that includes about 300 homes lost. All of it is in the remote eastern county, out-of-sight from world-famous Napa Valley, the county’s five cities and the main local roads of Highway 29 and Silverado Trail.

Another way to view the fire’s size—someone could walk from Lagoon Valley near Fairfield in Solano County north through the length of Napa County to Morgan Valley in Lake County, a distance of more than 40 miles, and never leave the burn zone.

The county has had more conspicuous and destructive fires, but none so big.

Cal Fire lists the state’s 20 largest fires that have taken place since 1932. The 165,000 acres that burned within Napa County during the Hennessey Fire would rank 19th on the list, if the Napa County portion were a separate fire.

The 306,000-acre Hennessey Fire as a whole would rank fifth on the list. Instead, Cal Fire combined it with two other fires that began the same day in Sonoma County to create the 363,000-acre LNU Lighting Complex, which ranks fourth.

No other fire involving Napa County since 1932 is on the list.

A visual demonstration of historic fires is provided by an Association of Bay Area Governments map based on Cal Fire data. The map shows the perimeters of large wildfires since 1950. Although the Hennessey Fire has yet to be added, there’s nothing depicted on the Napa County portion of the map that comes close to its size.

To view the map, go to https://bit.ly/2QXIBJ6 and choose the layer on the hazard viewer map for historic wildfire perimeters.

Many of the largest Napa County fires on the historic wildfire map burned over the past couple of decades. Among them are the 52,000-acre Atlas Fire of 2017 and the County Fire of 2018, which burned 90,000 acres in Napa and Yolo counties.

Napa County Fire Chief Geoff Belyea said he’s not an expert on why many of the larger fires are of recent vintage. But, he said, there’s lots of anecdotal information.

“My personal observation is a large driving force of it is weather,” Belyea said. “It seems like we’ve had more severe weather lately. The drought was certainly a big factor. They say we’re out of the five-year drought. I’m not sure all of the vegetation has really recovered.”

Also unique about this particular fire, Belyea said, is the speed at which it spread without the presence of “north wind-type” conditions – the kind that allowed the wildfires in 2017 to spread so rapidly.

The Hennessey Fire “showed some very extreme fire behavior” even outside of an abnormal wind event, he said. That prompted some evacuation orders to be issued in the middle of the night, a time when fire conditions typically favor firefighting efforts.

The already-burned acreage will likely not burn again this year, he said, adding that he expects grass to regrow there after winter and early spring rains. Portions of land that burned in the Hennessey Fire also burned in the Atlas Fire in 2017, he said.

But fire season is far from over.

“This certainly does not take the threat of additional fires away from Napa County, especially if we (do) get the north wind events we typically see in the fall,” Belyea said. “A third of the county burned, but that still leaves a large swath of land that could be impacted for another wildfire.”

Here are some of the larger Napa County fires over the past 70 years:

The 56,000-acre Hanly Fire broke out near Calistoga and burned to near Santa Rosa. Meanwhile, the 10,000-acre Nuns Canyon Fire burned in the Mayacamas Mountains and threatened the town of Sonoma. Still another 9,000-acre fire burned on Mount George east of the city of Napa.

Napa Valley was in a flaming noose. The situation was eerily similar to what happened to the county with the October 2017 wildfires.

September 1965 fires – Eight fires breaking out at about the same time burned more than 40,000 acres and destroyed at least 30 structures in what The Napa Register again called a “flaming nightmare.”

Miller Canyon Fire in 1988 – This 35,000-acre fire broke out in Solano County and burned much of its acreage in that county north of Vacaville, though it burned along the Blue Ridge and into southeast Napa County near Lake Berryessa. Reports at the time said seven homes were destroyed.

Sixteen Fire in 1999 – The 38,000-acre Sixteen Fire was name because it began near Highway 16 in Yolo County. It burned to northern Lake Berryessa, mostly in remote areas, though it neared the rural community of Berryessa Estates.

Tubbs, Atlas and Nuns fires of October 2017 – The 37,000-acre Tubbs Fire burned from Calistoga to Santa Rosa. The 52,000-acre Atlas Fire burned in such places as Soda Canyon, Silverado, Coombsville and near Lake Berryessa. The Partrick Fire later became part of the 56,000-acre Nuns Fire that burned in the Mayacamas mountains.

As in 1964, the fires broke out at about the same time and Napa Valley was hemmed in by flames. The county lost about 650 homes.

But even the Tubbs, Nuns and Atlas fires combined can’t rival the Hennessey Fire in size. Plus, much of the Tubbs and Nuns burn zones were in Sonoma County.

Then there are fires from the more distant past, with no acreage estimates. They are the fires of legend.

One that The Sonoma Democrat called the Great Fire began in October 1870 when two fires in St. Helena and one in Calistoga merged and swept over the Mayacamas mountains into Sonoma Valley.

“One of the most extensive and destructive fires of which we have record,” is how the paper described the fire back in pioneer days.

A late September, 1913 fire in Sage Canyon threatened St. Helena, sending clouds of smoke as heavy as fog through city streets. That fire followed a Capell Valley blaze that raced 25 miles to the south, The San Francisco Call reported that year.

But were these fires as big as today’s Hennessey Fire? By the newspaper descriptions, that’s doubtful, though the Great Fire might well rival the Hanly and Tubbs fires that seemed to burn a similar area.

Earthquakes, floods and fires – there’s apparently no safe haven from all of these potential disasters in Napa County.

The state will be providing this service at no cost to residents.

Containment of the LNU Lightning Complex Fires is now at 98 percent as of Wednesday evening, according to Cal Fire officials, with full containment expected by Oct. 1.

Up and down the West Coast, hospitals and health facilities are reporting an influx of patients with problems most likely related to smoke inhalation.

A heart for animals: Berryessa resident copes with the aftermath of the 2020 wildfires

Richard Wilson is grieving for the pets that he couldn’t save when fire swept through his Berryessa Highlands neighborhood and burned his home along with those of his neighbors.

In the shadow of 2020, Napa Valley's wine industry eyes growing season ahead

Napa Valley's wine producers say it could take years to fully recover from and repair damage done by 2020. Still, with springtime arriving, they're proceeding cautiously ahead.

Would you eat a sea cucumber? How the Chinese delicacy is cooked

Would you eat a sea cucumber? How the Chinese delicacy is cooked

The scorched remains of a Jeep remained in a driveway in the Berryessa Highlands subdivision of Napa County in late August, a week and a half after the Hennessey Fire obliterated the garage and house that had surrounded the vehicle.

The charred remains of one of the many destroyed homes near Silverado Resort as a result of the Atlas Fire in October 2017.