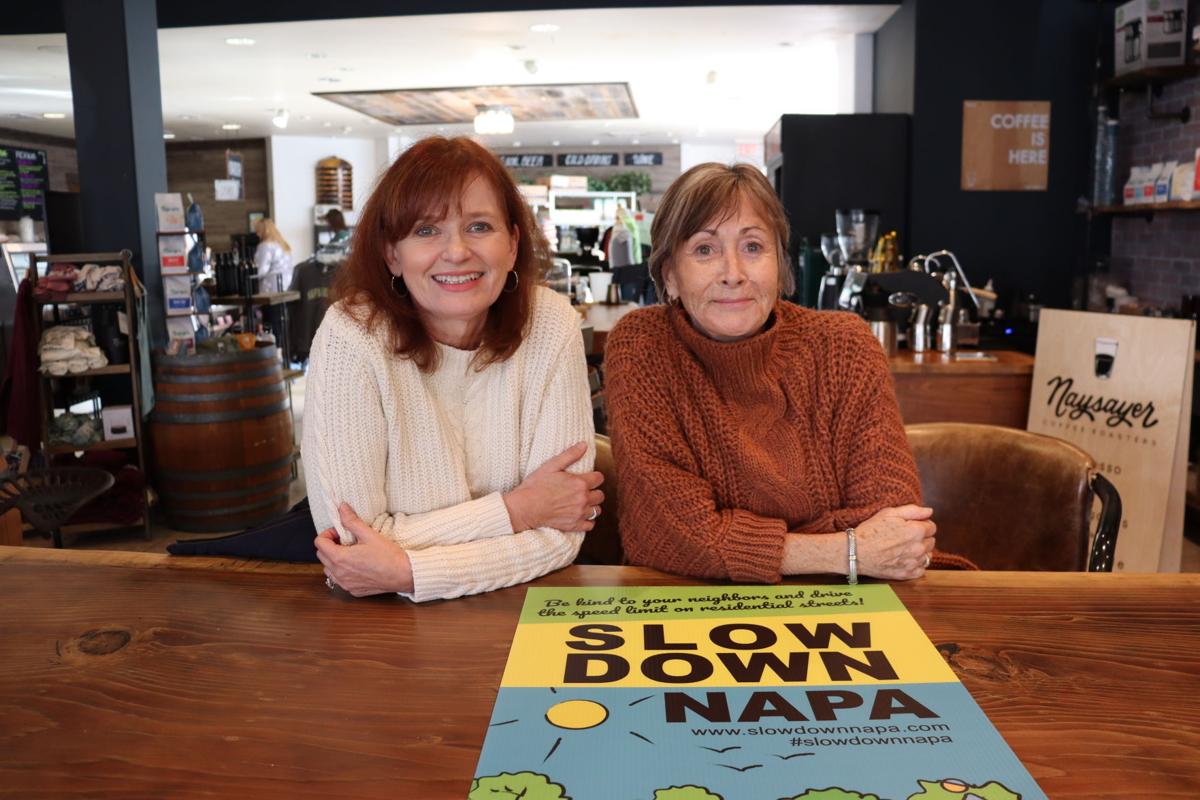 Joyce Stavert, left, and Maureen Trippe have helped lead the Slow Down Napa movement since October 2020. 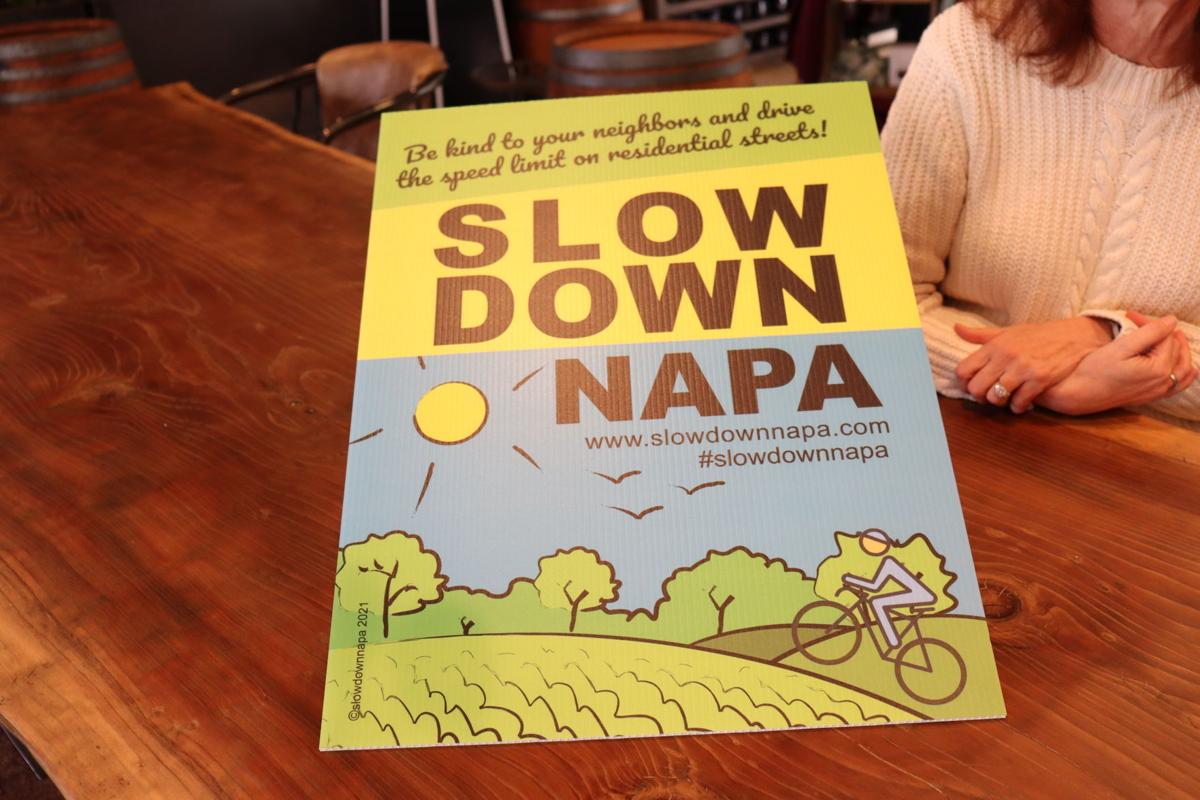 Slow Down Napa is a local effort to slow down speeding traffic in Napa's residential neighborhoods.

Cars and trucks that hurtle through the city of Napa’s residential streets need to slow down, some city residents are saying.

Slow Down Napa, a local movement organized by longtime Napans Maureen Trippe and Joyce Stavert, started up in October 2020 because of repeated complaints from local residents about speeding traffic.

“It seems to me that nothing riles up a neighborhood faster than a dead cat in the middle of the street or someone speeding,” Trippe said. “So in that respect, it feels to me like quite a unifying issue.”

Stavert said posts about cars speeding and running stop signs in local neighborhoods can be seen regularly on the app NextDoor. The Slow Down Napa movement essentially started, she said, because she and various neighbors decided to meet up in her backyard and talk about the traffic.

The idea that then formed to create Slow Down Napa was that it would be a volunteer group with residents from across Napa who generally know the traffic conditions of the streets they live on.

“We can’t solve the whole city; that’s a full-time job, and we don’t have the time to do that,” Stavert said. “But we thought that if we can get the groundswell going, then we can get more people to join.”

The two started up a website (slowdownnapa.com), which invites people to write in and tell Stavert and Trippe about the traffic problems in their neighborhood. That’s resulted in hundreds of emails from people all over Napa detailing those problems.

Downtown Napa has developed considerably over the past two decades, which is one major reason the city’s traffic has changed over time, according to Stavert.

“I’ve lived in the Valley since 1995, and it’s gone from a reasonably sleepy place to having a lot of hotels and shopping and restaurants,” Stavert said. “I mean, in 1995 there was like one restaurant worth eating at in downtown Napa. And now there’s 20 at least.”

As the downtown has become more of a destination for tourists and locals alike, various traffic calming measures — engineering measures like roundabouts, speed bumps, and converting one-way streets into two-way streets — have helped shape the downtown traffic, Stavert added. But not enough work has been carried out to adapt residential neighborhoods to the new traffic reality, she said.

“These little residential neighborhoods that have been here for a really long time have sort of fallen by the wayside as far as getting attention in the city,” Stavert said. “That’s understandable. This is not a criticism. It’s like, that’s how things work. You put the money into where the money’s coming to you, and it’s coming from tourism. So there’s nothing wrong with that.”

“But now’s the time to say, ‘OK, we have to take a step back and look at what we can do to fix the infrastructure on the streets where people live,’ Stavert added. “Because there’s more people than ever, more cars than ever, more pets, probably, than ever.”

Stavert and Trippe have met with city officials and Napa City Council members. Everyone’s been supportive and appreciative of the work the two are doing, Stavert said, though not much has happened so far at the city level.

“We’re just trying to figure out how we make this more of a priority for them,” Stavert said.

The plan will also set the framework for a “Vision Zero Policy,” which Lucido defined as: “a strategy to eliminate all traffic fatalities and severe injuries, while increasing safe, healthy, equitable mobility for all.”

Those traffic calming updates are set to be established after the roadway safety plan is completed in the first half of 2022, Lucido said. And the city’s already installed some pedestrian-friendly measures, such as flashing pedestrian beacons at crosswalks, speed feedback signs, curb bulb-outs  — which are sidewalk curb extensions into the street that reduces pedestrian crossing distance — and modified pavement striping on several streets.

“Engineering is one of three key components of traffic calming. The other two are education and enforcement, and together they are referred to as the 3 E's,” Lucido said. “The work that Maureen and Joyce are doing related to education to gain community awareness for speeding is great.  Their drive and positive energy is making a difference, and we look forward to continuing to partner with their group.”

The Napa City Council denied one drive-thru last week, and will be discussing other sources of greenhouse gas emissions created by idling cars as part of the city's upcoming general plan update.

The city of Napa, a bronze bicycle friendly community for about a decade, is looking to improve its bicycling infrastructure.

The Napa Parks and Recreation Foundation is hoping to fundraise and advertise for a summertime youth recreation scholarship program for city of Napa recreation programs.

California contains parts of 3 of the deadliest US interstates, report shows. Here's where

According to the National Highway Traffic Safety Administration, Americans drove 430.3 billion fewer miles in 2020 than 019, partly due to COVID-19.

A new way to fund infrastructure projects in the city of Napa is continuing to move forward.

Joyce Stavert, left, and Maureen Trippe have helped lead the Slow Down Napa movement since October 2020.

Slow Down Napa is a local effort to slow down speeding traffic in Napa's residential neighborhoods.