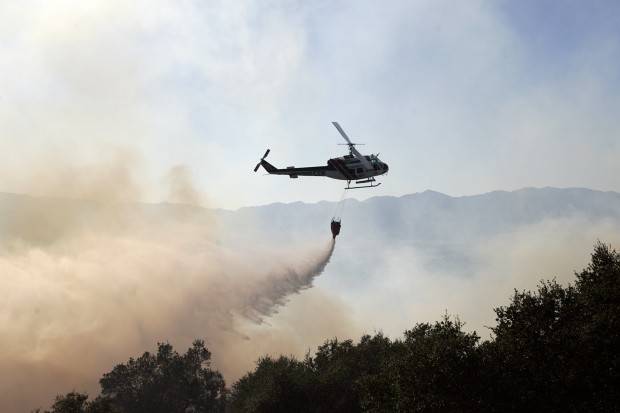 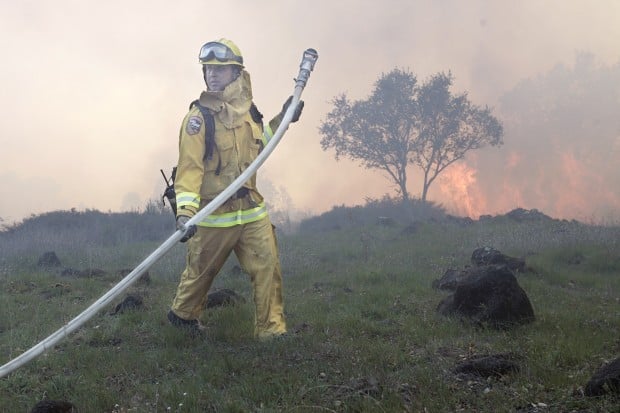 THURSDAY FEB. 23, 2012 NAPA, CA - A firefighter readies a hose to help protect a home threatened by a grass fire near the 3200 block of Soda Canyon Road. Jorgen Gulliksen/Register 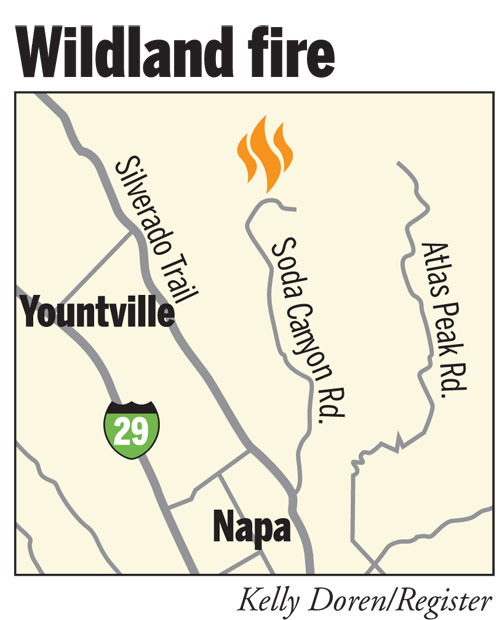 The fire broke out at mid-day Thursday, apparently caused when sparks from someone burning vineyard debris escaped into adjacent brushland, CalFire said. State fire spokesman Daniel Berlant said investigators are now trying to determine whether the unnamed person was negligent and should be fined, according to the Associated Press.

The wildfire had burned 200 acres by Thursday night. CalFire, assisted by fire departments from the Napa Valley cities and the Napa County Fire Department, spent all day Friday and Friday night putting out hot spots.

At the peak of the rare February wildfire, three homes up Soda Canyon Road were threatened, but firefighters saved them all.

At the fire’s peak, more than 200 firefighters were on the fire lines, with two helicopters dropping water near threatened residences.

Fire crews intended to remain on the scene Saturday, patrolling and mopping up, CalFire said.

Two hundred firefighters continue to battle a brush fire that has scorched about 200 acres in Soda Canyon, but the lack of winds allowed them to make progress in corralling it on Friday, according to CalFire.

Friday’s fire didn’t produce the heavy smoke seen in the area northeast of Napa on Thursday afternoon, when the blaze broke out shortly after 12:30 p.m.

Crews spent Friday extinguishing hot spots, where flames burst out in small areas, and working to complete a containment line around the fire’s acreage, said CalFire spokesman Daniel Berlant. As of late Friday afternoon, he wasn’t sure how much of the fire had been contained.

The work is difficult because the canyon is extremely rugged and steep, but the good weather and low winds helped fire crews, Berlant said.

“The weather really has been cooperating today,” he said. “Residents saw a significantly less amount of smoke. We want to make sure we put out every ember, every hot spot before we leave.”

The fire threatened three homes Thursday night, but they were safe by Friday, Berlant said. Investigators are looking into reports that the fire started from a debris burn, possibly from a vineyard.

Berlant said this is one of the largest wildfires in the state so far this year. He said having a fire of this size this early in the year is rare.

“It’s not something we’ve had in many, many years,” Berlant said.

The blaze hadn’t grown much overnight Thursday, officials said. CalFire hadn’t been able to accurately assess the size of the fire from the ground Thursday because it had burned into a steep canyon.

Crews from around the state have come to help fight it, Berlant said. Slightly fewer than 200 firefighters were on the scene Friday.

The hillsides are much drier than usual because of the low rainfall this winter. Temperatures Thursday were some 15 degrees warmer than usual, with strong winds at the ridge tops.

Berlant said the recent rain hasn’t done much to help the dried-out grass and brush.

“If we don’t see a monsoon of rain over the next month it’s going to dry out more,” Berlant said. “We’re only going to see more and more fires as we get later into the year.”

CalFire may bill landowner for cost of fire at Soda Canyon

CalFire is adding up receipts for last week’s fire in the Soda Canyon area, a bill that may have to be paid by the party responsible for start…

Last month’s 200-acre blaze in Soda Canyon was a rarity — and possible record — for Napa County, but wildfire forecasters differ in predicting…

High winds fan the flames of a wildfire near the 3200 block of Soda Canyon Road.

THURSDAY FEB. 23, 2012 NAPA, CA - A firefighter readies a hose to help protect a home threatened by a grass fire near the 3200 block of Soda Canyon Road. Jorgen Gulliksen/Register