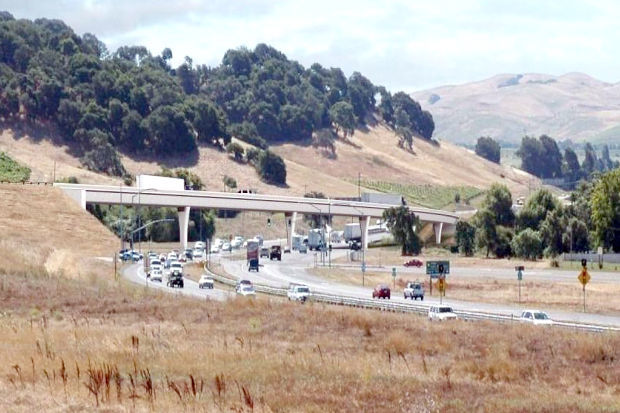 A simulated photo of the proposed Soscol Junction flyover project, looking east from near the Grape Crusher statue. A planned Bay Area vote in June to raise tolls on area bridges would generate funds for some south Napa County projects, including potentially Soscol Junction. 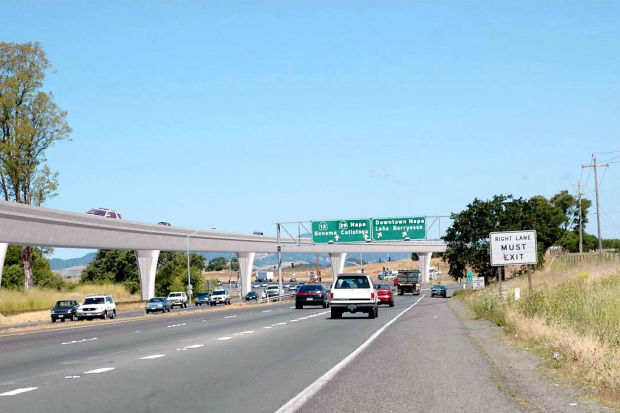 A $40 million plan for a Soscol Junction flyover promises to cut a two-minute-plus evening rush hour delay there to a matter of seconds -- and keep it that way through 2039.

The state Department of Transportation has released a 400-page draft environmental study on proposed flyover variations at Highway 29 and Highway 221. Now it wants the public to weigh in.

No money is yet available to build a flyover. That provides plenty of time to ponder the pros and cons of this proposed traffic-knot solution.

Local commuter Sharon Accardo knows what it’s like to sit at the Soscol Junction traffic signal about a quarter-mile east of the Grape Crusher statue. The intersection is part of her daily commute to and from Napa and San Ramon.

“A lot of times on Thursday or Friday, I sit through three or four cycles,” she said. “Monday through Wednesday is not so bad.”

Caltrans proposes to build a flyover that would take Highway 221 traffic leaving Napa for Fairfield, American Canyon and Vallejo over Highway 29. Traffic would then merge with southbound Highway 29.

Out of two variations of this idea, the one that clears up traffic snags for the long-term also removes the traffic signal from the intersection.

Without the flyover, the long-term traffic situation at Soscol Junction looks grim. Caltrans predicts that 151-second evening rush hour delay of today would grow to 395 seconds – more than six minutes – by 2039.

Accardo guessed that a Soscol Junction flyover would increase delays at other nearby intersections on Highway 29, unless those intersections are also improved. The bottleneck would simply move.

She’s right. For example, the environmental report says the afternoon delay at the Highway 12 and Highway 29 intersection near the Napa County Airport in 2039 would be five minutes with the flyover in place, compared with 4½ minutes without it.

Still, drivers would save far more time at an improved Soscol Junction than they would lose at Highway 12 and Highway 29. Build the flyover and the combined 2039 delay at the two intersections will be less than 5½ minutes. Fail to build it and the combined delay will be 11 minutes, the study predicts.

Accardo sees a bigger advantage to the proposed flyover than time savings.

“I think it would be safer,” she said. “That intersection itself, the way it’s set up, the curves, the angles of it, the descent of the bridge, all of that stuff combines together so it isn’t safe where that signal light is sitting.”

She described the situation of cars descending the Butler Bridge and approaching the intersection in the dark on foggy, early mornings.

Soscol Junction has an accident rate of 0.59 per million vehicle miles, compared with the statewide average of 0.55 for similar intersections, the environmental impact report says. The majority of accidents are related to highway congestion.

Ismael Guillen is concerned about the proposed Soscol flyover project. His Villa Romano restaurant is located on Soscol Ferry Road at the southeast corner of the intersection, in the historic Soscol House.

Some drivers would have a longer journey to Villa Romano if the flyover is constructed and the traffic signals removed. They could no longer drive through the intersection from Highway 221 to Soscol Ferry Road or make left turns at the intersection.

That means drivers coming to the restaurant from American Canyon would have to take a more roundabout route to reach the restaurant. They could approach through the airport industrial area or Napa Valley Commons.

The Soscol flyover project would remove bike lanes at the intersection. The Napa Valley Vine Trail is asking that the project as compensation build the planned Vine Trail segment from Soscol Ferry Road at Napa Sanitation District to Airport Road and on to the Jameson Canyon entrance.

“We think that’s a great tradeoff,” said Chuck McMinn, Vine Trail board president. “It gets the bikers off what will be a heavily used flyover and gets them on a safe route.”

Caltrans will also have to mitigate for various project effects on the Soscol Junction habitat areas. For example, as many as 76 trees would be cut down to make room for the flyover. Caltrans proposes to plant 122 replacement trees.

Then there are various rare species that could live in the area. Caltrans would compensate for destroying 9 acres of California red-legged frog habitat by preserving 27 acres elsewhere.

Caltrans and the Napa County Transportation and Planning Agency will hold a workshop for the proposed Soscol flyover from 6 to 8 p.m. Tuesday, April 14, at the NCTPA headquarters, 625 Burnell St.

“It’s pretty much the unveiling of the federal environmental document and will give the public an opportunity to comment on the project,” NCTPA Executive Director Kate Miller said.

Caltrans and the Napa County Transportation and Planning Agency will hold a workshop for the proposed Soscol flyover from 6 to 8 p.m. Tuesday, April 14, at the NCTPA headquarters, 625 Burnell St.

A simulated photo of the proposed Soscol Junction flyover project, looking east from near the Grape Crusher statue. A planned Bay Area vote in June to raise tolls on area bridges would generate funds for some south Napa County projects, including potentially Soscol Junction.