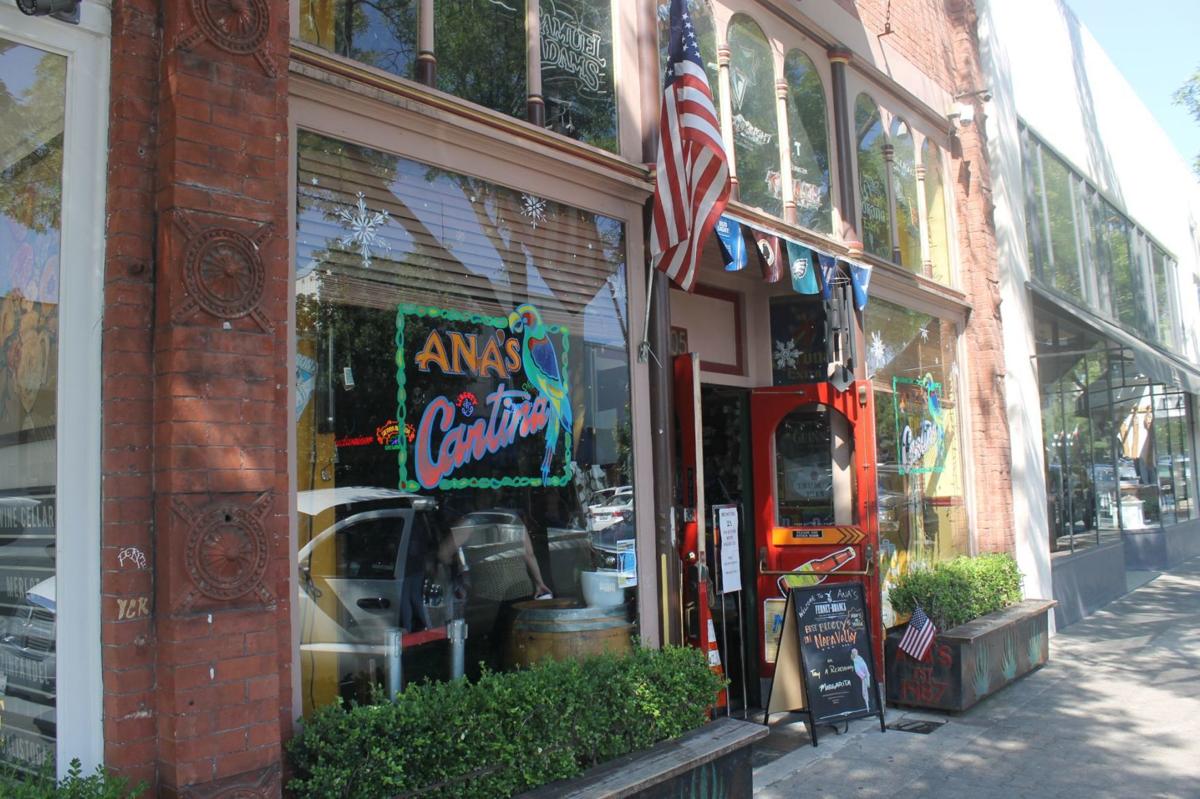 One of the landmarks in St. Helena is Ana's Cantina at 1205 Main St. It is owned by Ana Vigil Footman and formerly was known as Ray's Place. 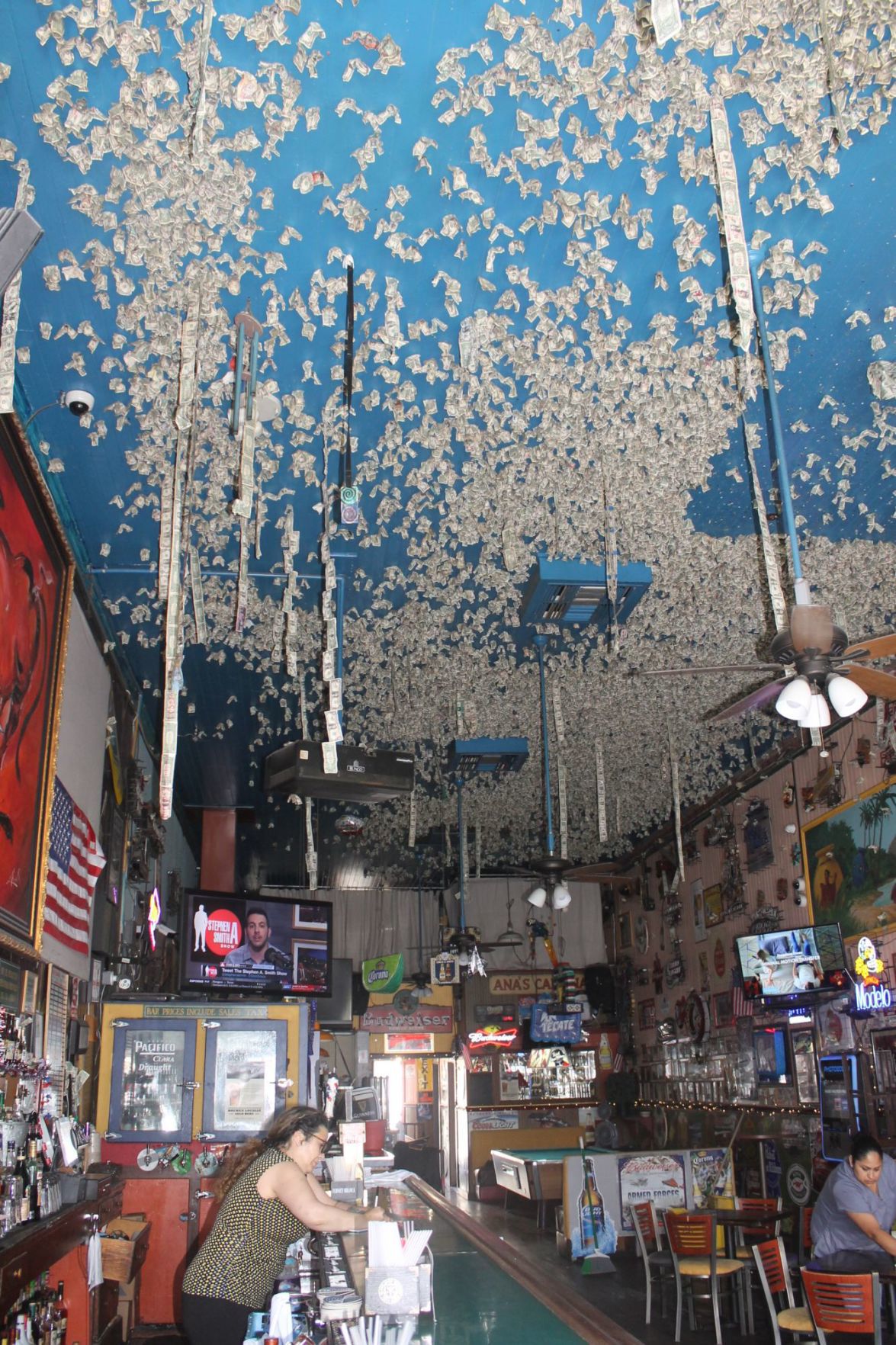 Roxana, aka, Roxy Rallis, daughter of Ana Vigil Footman, prepared to open the bar on Friday morning. On the ceiling are the dollar bills that Vigl Footman uses to fund local nonprofit groups. Rallis said running the bar is a family affair that includes her brother, Mike Rallis and two sisters, Cat and Vanessa Gonzales. 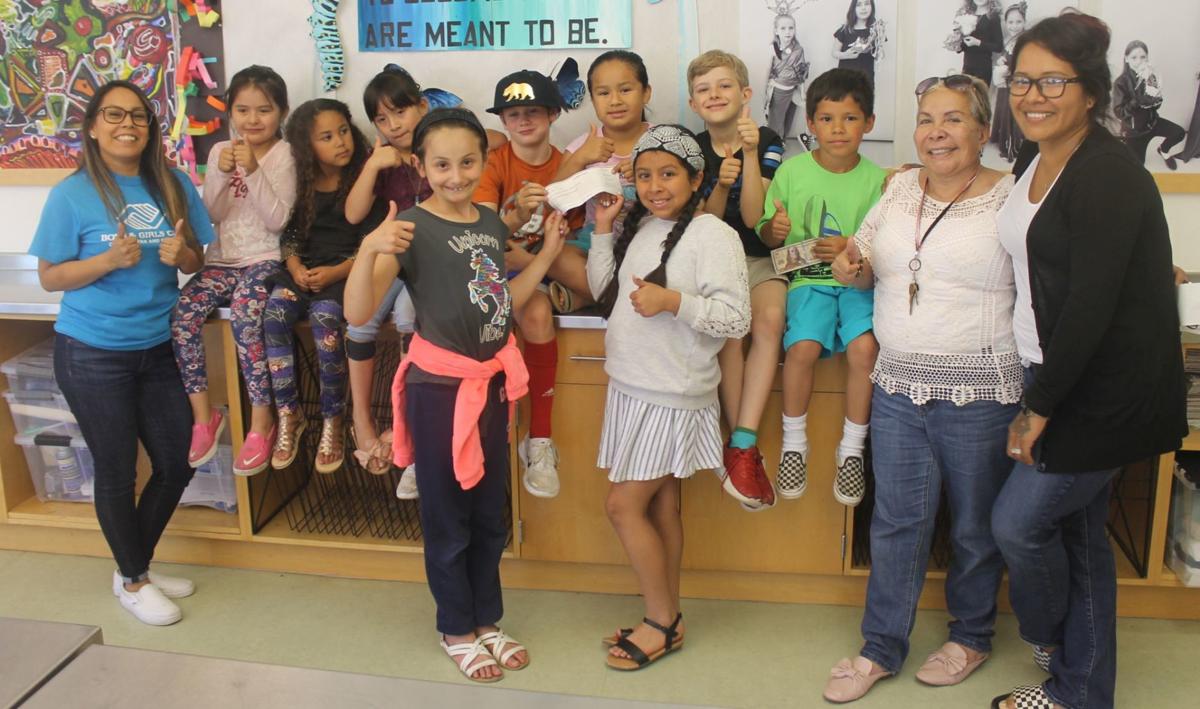 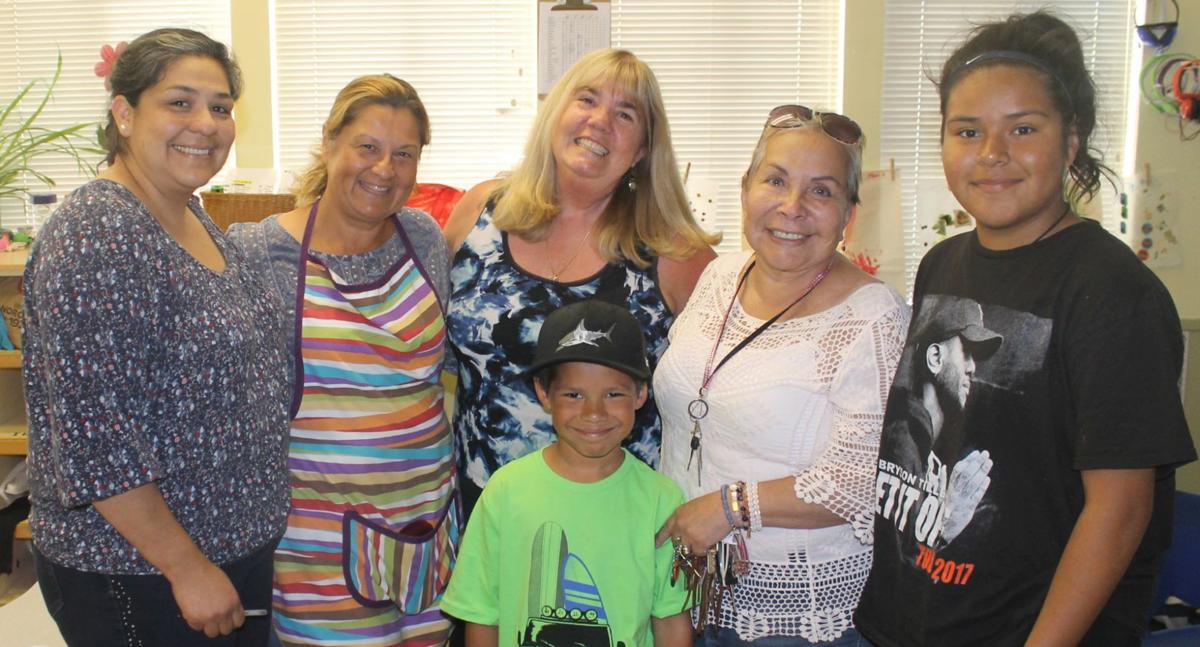 This lively group gathered recently to celebrate the donation of a $2,000 check from Ana Vigil Footman, fourth from left. The employees of the St. Helena Child Development Center are, from left, Maria Montanez, associate teacher; Rosa Hurtado, assistant teacher's aide, who has been with the center for 37 years; and Marianne Stegman, site supervisor. Also in the photo are Izaiah Fernandez, Footman's grandson, and Lucia Gonzalez, 14, who used to attend the Center.

One of the landmarks in St. Helena is Ana's Cantina at 1205 Main St. It is owned by Ana Vigil Footman and formerly was known as Ray's Place.

Roxana, aka, Roxy Rallis, daughter of Ana Vigil Footman, prepared to open the bar on Friday morning. On the ceiling are the dollar bills that Vigl Footman uses to fund local nonprofit groups. Rallis said running the bar is a family affair that includes her brother, Mike Rallis and two sisters, Cat and Vanessa Gonzales.

This lively group gathered recently to celebrate the donation of a $2,000 check from Ana Vigil Footman, fourth from left. The employees of the St. Helena Child Development Center are, from left, Maria Montanez, associate teacher; Rosa Hurtado, assistant teacher's aide, who has been with the center for 37 years; and Marianne Stegman, site supervisor. Also in the photo are Izaiah Fernandez, Footman's grandson, and Lucia Gonzalez, 14, who used to attend the Center.

ST. HELENA — Sometimes the best stories begin with a riddle. “How do the dollar bills get stuck to the ceiling at Ana’s Cantina?”

I asked that question of Ana Vigil Footman, owner of Ana’s Cantina for the past 32 years. Her answer, “It will cost you a buck to find out.”

A couple of hours earlier, Ana was sitting at a table in the empty bar, talking on her cellphone. Her daughter was tending bar when Yunette Salazar came in the back door. She wanted to tell Ana about her good news.

“I was the lucky person who won the $1,000 shopping spree at Amelia Claire,” she said. With owner Rene Sculatti’s help, Salazar stocked up on dresses, shoes and accessories. The raffle was in honor of Sculatti’s 30th anniversary in business on Main Street in St. Helena.

It was time to go, so out the back door we went, heading to the Boys & Girls Clubs of St. Helena and Calistoga. Footman started talking as we were walking and I stopped her, telling her I couldn’t write and walk at the same time. I turned on the “Voice Memos” app on my iPhone. I stuck it in her face.

“Last Thursday, eight members of the Odd Fellows came and brought a scaffold to clean (the dollar bills) off the ceiling. We counted the money, it came to $4,515. They helped me straighten out the bills, because they were so wrinkled. Then, we took the money to Wells Fargo Bank, so they could count it and give me cashier’s checks,” Footman said.

Even though the crew had straightened out the bills, they still were too wrinkled to go through a counting machine. Footman said she was grateful that Wells Fargo had extra tellers to help count the money.

Two thousand dollars was given to the Boys & Girls Club, another $2,000 to the St. Helena Child Development Center on Spring Street and $515 to the cheerleaders at the high school.

“What I really appreciated is the community’s help in clearing off the ceiling,” Footman said. “For me to go up to the ceiling is hard,” said Footman, who has raised four children, has seven grandchildren and a 3-year-old great-grandchild. She mentioned that the Odd Fellows cleared off just a part of the ceiling.

They weren’t expecting us at the Boys & Girls Club on Tainter Street. “How can I help you?” asked the woman at the desk. Footman replied that she wanted to give them some money. They didn’t know it was going to be $2,000.

Nick Haley, director of program services, and others gathered a group of children for a photograph and then he said the donation was very welcome.

“We probably will use it to help fund our new STEM (Science, Technology, Engineering and Math) room. We’re running a couple of STEM summer camps this year,” he said, so they are researching specialized equipment, including laser cutters and a 3-D printer.

At the next stop, the St. Helena Child Development Center, site supervisor Marianne Stegman had tears in her eyes when Footman presented her with the check. “Vanessa (Footman’s daughter) just called the other day and said we would be getting a donation, but we thought maybe a couple hundred dollars. We never expected so much,” Stegman said. “You don’t know small our budget is,” she added.

When asked what she would use the money for, she gave it some thought – maybe books, sand and water toys for the children, an umbrella for shade. Twenty-two children are enrolled in the year-round program, which is located on the campus of the First Presbyterian Church of St. Helena on Spring Street. Its hours are 8 a.m. to 5 p.m., Monday through Friday.

About the donations, Footman said, “I like to help. All my life, I’ve been involved in helping the community.”

Dollar bills on the ceiling

Finally, back at the bar – “Do you want a margarita?” Sure, why not, it’s Friday afternoon. I grabbed my wallet and the margarita was free, but the lesson was not. I pulled out a dollar bill and gave it to Ana – I wonder if I can be reimbursed – and she took a thumbtack and pierced George Washington’s nose. Footman added a bundle of four quarters wrapped in plastic, and folded the dollar bill around it.

Her advice: It’s not hard to stick a dollar bill on the ceiling, but it will take practice. She estimates anyone can do it within five tries.

“You’ve got to throw it underhand, with a big swinging motion,” she said. I did and the dollar bill fell to the floor. “Don’t try to catch it,” she said, laughing. I didn’t, because I could imagine catching the thumbtack would hurt.

Another try and another failure. “Throw it straight up. Not out. You’ve got to throw it as hard as you can,” she said. I did, and the dollar bill package fell to the floor. The thumbtack stuck hard into the wooden floor.

She gave me another thumbtack. I pierced Washington’s nose, wrapped the quarters up around the dollar bill and tossed it underhand it toward the ceiling but a little less hard than before. It stuck … joining the thousands of dollar bills left on the ceiling, waiting to be harvested in another year — or the year after that.

Footman has owned Ana’s Cantina since 1987. She bought it from Helen and John Ghiringhelli when it was a working man’s bar called “Ray’s Place.” It is at 1205 Main St., in one of two matching brick buildings, built in 1896, according to the St. Helena Historical Society in its marvelous book, “Discover Historic St. Helena.”

Around 1928, a restaurant occupied the building and in 1948 it became “Ray’s Place.” The second brick building, at 1201 Main St., is the home of Napa Valley Vintage Home.

Footman grew up in El Salvador and when she graduated from high school, her parents sent her to study at Heald College in San Francisco. Her parents’ plan was to study here, go back home, have a career and then marry. Footman said, “What happened to me is I fell in love with a Greek guy. Once I got married to him, we went and lived in Athens.” They had two children.

In the 1970s, though, Georgios Papadopoulos took power in a coup d’etat and became president. “It was no good, so we came back to the United States,” Footman said. The couple came to live in Calistoga, because it looked like the Mediterranean, in the 1970s.

“In my family, they didn’t know anything about restaurants, but my parents-in-law had a restaurant in San Francisco that was called Athens Greek Restaurant, which is where I started to be involved in restaurants,” Footman said.

She owned the Calistoga Drive In, where Buster’s is now, from 1987 to almost 2000, then she owned Ana’s Patio Café in Calistoga, which was in a small building on John Merchant’s property across from Dr. Wilkinson’s. Prior to that, she owned Ana’s Taqueria, which was across the street from the Middletown High School. Somewhere in there, she also owned Las Mananitas on Lincoln and Trancas in Napa.

She was involved with the City of Calistoga back in the 1990s, but she adds today, she is slowing down.

She and Duncan Footman have been married for the past 25 years; Duncan was a lawyer in Napa for 40 years. He graduated from Yale University and then went to University of Chicago Law School. He spent three years in Venezuela in the Peace Corps.

“He’s a gentle soul, very nice and he is completely different than I am. We are like yin and yang. I am wound up and he is very calm,” she said.