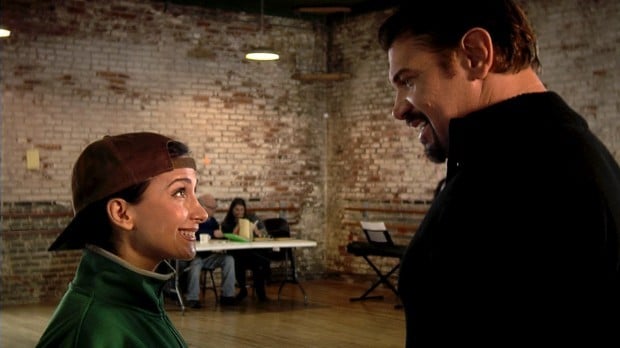 Melissa Fahn (left) and Sam Zeller in a scene from “Tick Tock Boom Clap,” a new independent film partly based on the experiences of writer-director Sara Pedri, a Napa native and longtime California stage performer. The movie includes flashbacks to a 1970s tap-dance performance at a county fair, similar to a 1972 show at the Napa Town & Country Fair in which Pedri saw the future tap performer Charlie McGowan. “Tick Tock Boom Clap” opens Aug. 20 in Beverly Hills, with a showing scheduled for Aug. 25 in Fairfield. Submitted photo 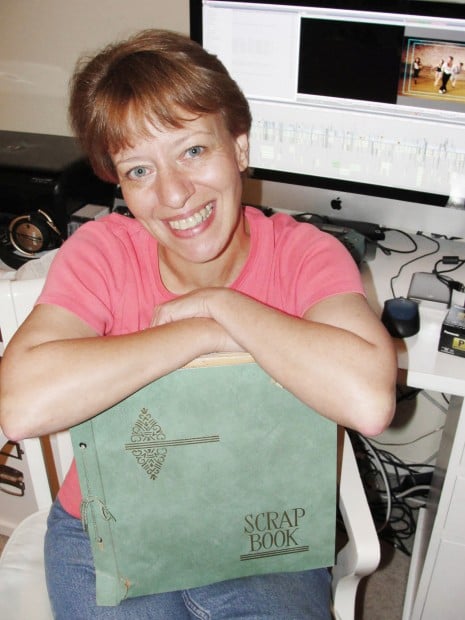 A young girl’s love for dance and theater was born at the Napa Town & Country Fair on an August night four decades ago. Now the woman’s search for the tap dancer who fired that passion is birthing a new movie and, for its creator, a fuller understanding of her life’s path.

A longtime singer and dancer in Bay Area productions, Sara Pedri has drawn on her experiences on and off stage for the film “Tick Tock Boom Clap.” Named for the cadence of the first tap-shoe steps she learned as a child in Napa, the independent production is set to debut this month and receive its first area showing Aug. 25 at the Downtown Theatre in Fairfield.

Filmed last year in Sonoma County, “Tick Tock Boom Clap” features a comic-dramatic plot launched by the main character’s flashback through the decades to a long-ago day at the fair. The movie’s near-middle-age protagonist, also named Sara, is grieving the recent loss of her parents when her friends, seeking to lift her spirits, concoct a plan to take her to a Broadway production starring the tap dancer she once idolized.

In spirit if not in every plot twist, “Tick Tock Boom Clap” maps Pedri’s own path from grief to acceptance following the death of her parents, and the refreshing of her love for the stage, the 49-year-old Santa Rosa resident said Thursday.

“To open up and write this was like opening a Pandora’s box of emotion,” said Pedri, a 25-year veteran of Northern California community theater. “I had squelched the grief, pushed it down and put a lid on it. l’ve learned everyone deals with it differently; you just have to write it out and let your body do it in its own time. And that’s a line from the movie — everything in its own time.”

Sara Kustiner was 9 and already taking tap classes in Vallejo when the tap dancer Arthur Duncan, a regular on “The Lawrence Welk Show,” came to the Napa Valley Expo in August 1972. Already an enthusiastic performer in the fair’s dance contests, Sara showed up for Duncan’s performance — only to be smitten by his stage partner that evening, Charlie McGowan, then 12.

“It was an amazing thought that a local talent was on stage with Arthur Duncan,” she recalled of that night. “Just to see a boy tap dancer, any boy tap dancer back then — there weren’t a lot of men in my dance classes. He was the catch, he was cute and he could tap!” she said with a hearty laugh.

Starting in the 1980s, Kustiner-Pedri appeared in numerous plays and musicals in the Bay Area, but as an avocation while she became an accountant and started a video production business with her husband, Jason Pedri. Along the way, she kept track of McGowan’s stage career as best she could in the pre-Internet age, eagerly taking in his occasional television appearances and watching his performance in the 1985 film version of the hit Broadway musical “A Chorus Line.”

But the loss of her parents followed by the birth of her son, Nick, in 2004 began to make her think about how she might make her son understand what theater had meant to her.

The first step to revisiting those memories was literally to unpack them from the office of the Pedris’ Santa Rosa home. Her opportunity came one night in 2007, as she moved a roomful of files and mementos from her stage career to clear out a bedroom for her then 3-year-old son.

Kustiner-Pedri remembers her epiphany coming as Nick dozed in her lap, having worn himself out gaily mimicking “A Chorus Line” dance moves in front of the TV.

“I was moving stuff out of the room that day: boxes of scripts, awards, pictures, articles,” she said. “And I looked at all this stuff and I said to myself, ‘He’s never gonna go through all this; what do I want him to know about his mom and the theater, and the friends and family behind it?’ I wanted to put it all together in one story and make it simple for him, and if he wanted to go deeper, then he could dig.”

Two weeks of all-night writing sessions produced a 120-page screenplay draft, and in October 2008 she held a script reading for a group of stage actors she had worked with over the years. Her connections allowed her to take on two Broadway players for the main roles: Melissa Fahn, who performed in “Wicked,” and Sam Zeller from the revived version of “Peter Pan.”

Over the next two years, Sara and Jason Pedri raised about $100,000 for the project, and six months of off-and-on filming were completed in July 2011. Because the Napa Valley Expo’s old Plaza Stage had been razed, the Pedris shot most of “Tick Tock Boom Clap” at the Sonoma Marin Fairgrounds to capture as similar a setting as possible.

As Pedri’s cinematic alter ego searches for the dancer who inspired her, so Pedri herself spent two years seeking McGowan with faint hopes of including him in the film. After finally tracking down the dancer and talking to him on the phone for two hours, she and McGowan met in Santa Rosa on the “Tick Tock Boom Clap” set.

The meeting was a poignant one; a heart attack had forced McGowan into retirement and the limbo that Pedri’s parents had feared when they steered their daughter away from a full-time stage career. But after nearly four decades, he and the woman who once had a crush on him still shared a common love. And so, in the theater lobby, the two danced the signature “Chorus Line” number, “One Singular Sensation.”

What was in real life a gentle postscript, Pedri, in her film turned into a moment of self-revelation for her fictional self.

“That’s why Sara (of the movie) searches for Charlie, because there’s that chance there’s someone else who knows her history,” she said. “But in the end, she doesn’t really need him in order to know that; she knew it herself all along.”

These spacious second-story residences might appeal to someone moving out from San Francisco or wanting to come down from the Upvalley, the developer said.

Authorities have identified the man who died Friday night after a house fire in American Canyon.

The council framed the issue as involving public safety, not free speech. Demonstrators can still protest, but must observe new boundaries, they said.

The Napa Valley Unified School District board is set to discuss a possible middle school closure plan Thursday, with a vote expected April 22.

The 3.4 quake struck between Calistoga and St. Helena shortly after 7 a.m.

Melissa Fahn (left) and Sam Zeller in a scene from “Tick Tock Boom Clap,” a new independent film partly based on the experiences of writer-director Sara Pedri, a Napa native and longtime California stage performer. The movie includes flashbacks to a 1970s tap-dance performance at a county fair, similar to a 1972 show at the Napa Town & Country Fair in which Pedri saw the future tap performer Charlie McGowan. “Tick Tock Boom Clap” opens Aug. 20 in Beverly Hills, with a showing scheduled for Aug. 25 in Fairfield. Submitted photo