It was a genteel scene tucked amid the bustle of modern-day downtown Napa – 17 women enjoying the company of their friends, and an assortment of teas and pastries on painted china, amid the Victorian-era trappings of the Ackerman Heritage House.

Wooden paneling, oil paintings and crystal-fringed chandeliers framed the dining room where visitors made small talk and jokes over tiny cups of Earl Grey, finger-size salmon sandwiches, and scones sweetened with marmalade from the kumquat and lemon trees outside.

Later, a guide would lead them through a tour of the home and its late 19th-century furnishings – the cigar-scented library room, the master bed with its four pole-thick bedposts, even a hand-carved mahogany birdcage that had survived more than a century under this aged roof.

“It’s kind of a walk through history, an experience with a historical feel to it that makes people appreciate it more,” said Joe Hinde, the Ackerman house’s hospitality assistant.

While most guests took their places at the burled walnut dining-room table, others took their tea at side tables in the living room, where curtains gently filtered the summer sunlight into a soft half-glow that matched the relaxed mood of the repast inside.

“It’s more set up for conversation instead of ‘doing lunch,’” added Evans, who with her daughter has frequented formal teas at about 20 landmark homes in the Bay Area and beyond. “It has an elegance to it, that old-time elegance.”

The air of bygone gentility left its mark even on the afternoon’s oldest guest shortly after she stepped inside the Ackerman house for the first time. “It’s magnificent. Oh, it’s hard to describe how lovely it is,” Monica Wetmore, born 96 years ago at Caymus and Brown streets, marveled while taking her place at the 14-place main table with her three daughters.

Following the tea lunch, the visiting women got to see the history of the house – and mementoes of daily life a century ago – up close.

In the foyer, Hinde briefly slid hidden pocket doors closed and then open again, telling onlookers of their use to keep male and female social gatherings separated in the home’s early years. Upstairs, he pointed visitors toward a puffy peacock-pattern pillow atop a sturdy bed, the wind-up phonograph with its protruding horn, the 25 stained-glass windows dotting the mansion (17 of which are original, according to Hinde).

The monthly teas and tours open a window for visitors into the society into which the Queen Anne Victorian emerged on its completion in 1888. They also keep in the public eye a landmark that had been become rundown, with a leaky roof and an accumulation of trash until Lauren Ackerman of the Ackerman Family Vineyards in Coombsville purchased the property in 2010.

“We realized it was a great opportunity to showcase this house,” said Molly Towey, event coordinator for the Ackerman house. “People are coming from all over the Bay Area (because) there’s a culture of people who go to tea houses, and this house completely builds on the history of afternoon tea. To me, this house is made for this; this place is an actual Victorian house.”

“It opens that door for people to find out about all these things,” she said Monday. “They love idea of tea at a Victorian home, and once they’re here they’re educated on all of that (history). It probably brings a much greater appreciation of this era and the beginnings of Napa, which is amazing.”

“It’s an honor, frankly,” said Hinde. “I never thought I’d see myself in a place like this; it’s a heart-filled project.”

Tea at the Ackerman

The Ackerman Heritage House at 608 Randolph St. in Napa hosts tours with afternoon tea one Sunday a month. Admission is $55, plus tax and gratuity.

Holidays at the Ackerman Heritage House

It’s not every day you find a Napa Valley vintner serving visitors a nice pot of tea, but that’s what Lauren Ackerman was doing on last Sunday…

According to Lauren Ackerman, the restoration of a historic house doesn’t end just because the construction is finished.

A grand Napa home is now much grander

Back in 2010, Lauren Ackerman pledged to bring Napa’s historic Gifford house back to life, and today, the Napa woman has made good on her promise.

Painted in shades of bright yellow, purple, turquoise and hot pink, the vintage Victorian home on Vallejo Street in Napa certainly stands out …

If ever there was a place to inspire your best behavior, it’s the Ackerman Heritage House in Napa, a restored Victorian filled at every turn w…

In a 19th-century Napa mansion, Sunday afternoon was more than a time for tea and scones. It was a chance for mothers to take in the atmospher…

The Supreme Court ruled Thursday against President Trump's attempt to shut down the Obama-era program. 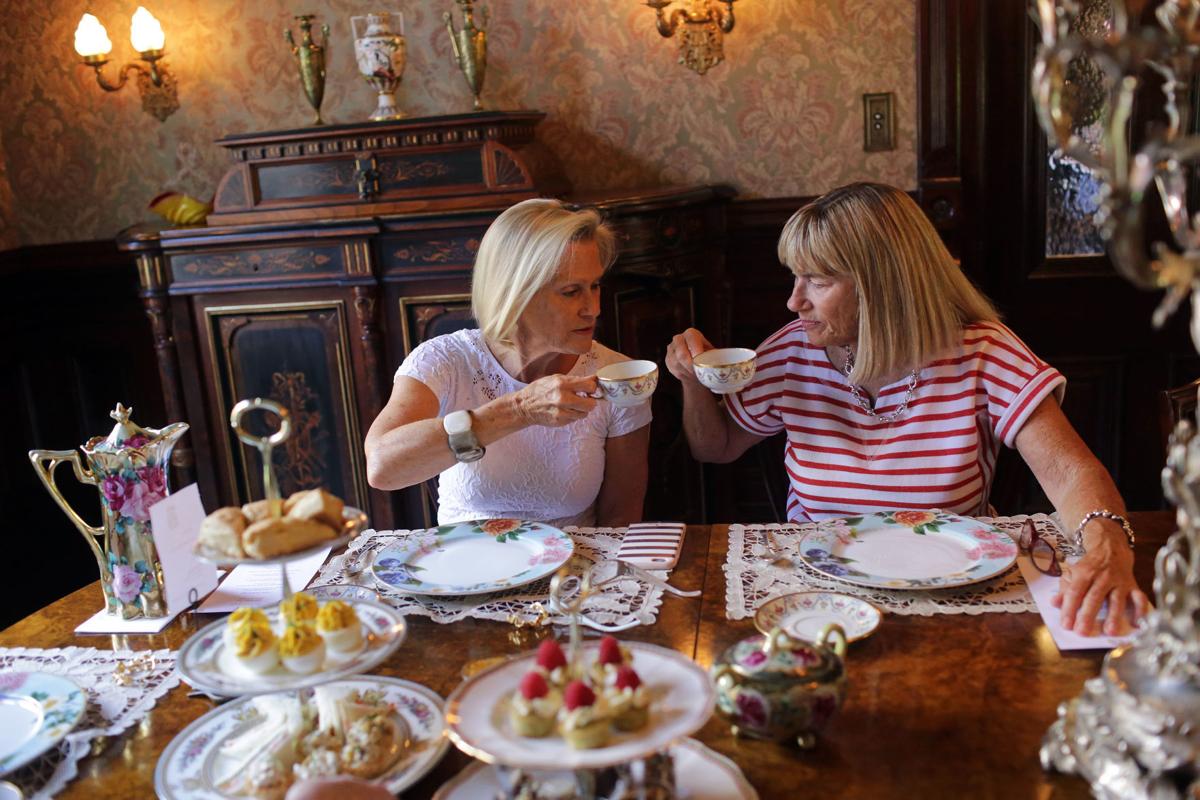 Sisters Becky Barrango (left) and Carolyn Merry toast each other Sunday during high tea at the historic Ackerman Heritage House, on Randolph Street in downtown Napa. The tea ceremony is part of the monthly tour of the landmark home built in 1888, which the winemaker Lauren Ackerman bought in 2010 and spent five years restoring. 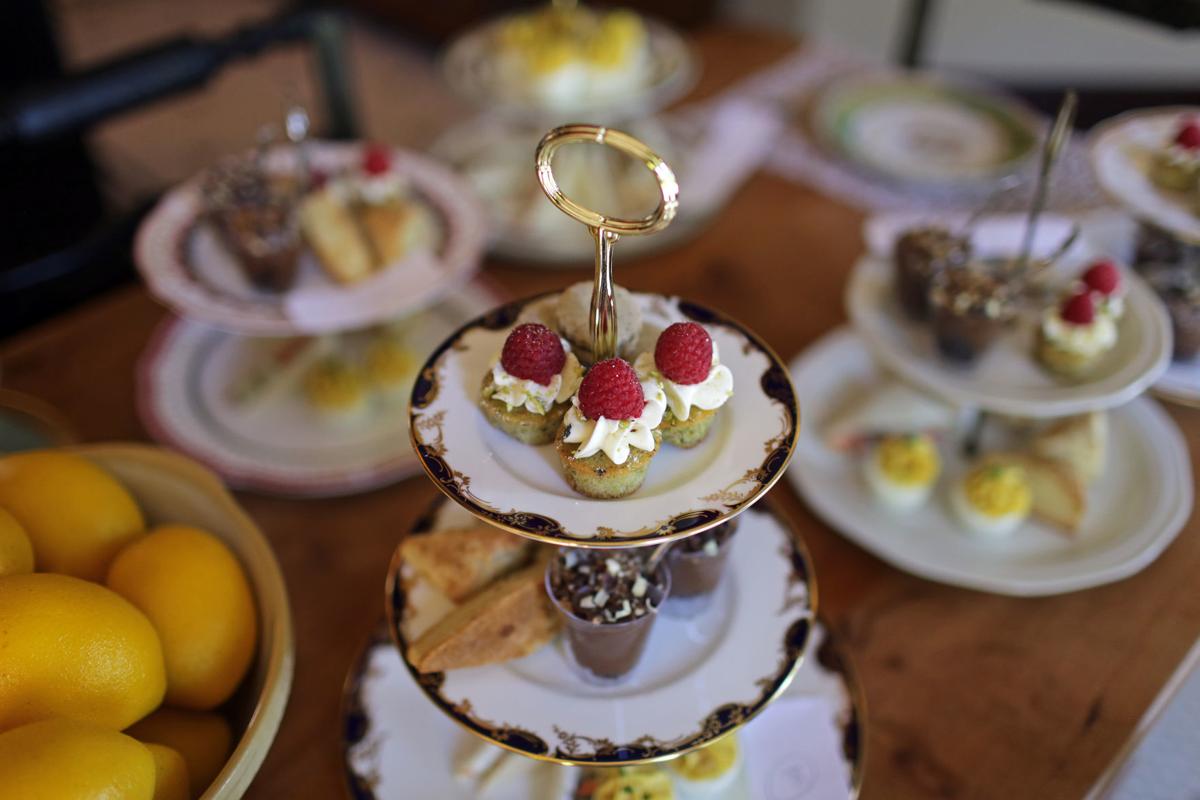 Pastries, scones and chocolate mousse were prepared in the Ackerman House kitchen Sunday ahead of the monthly afternoon tea and tour of the 1888 landmark in Napa. 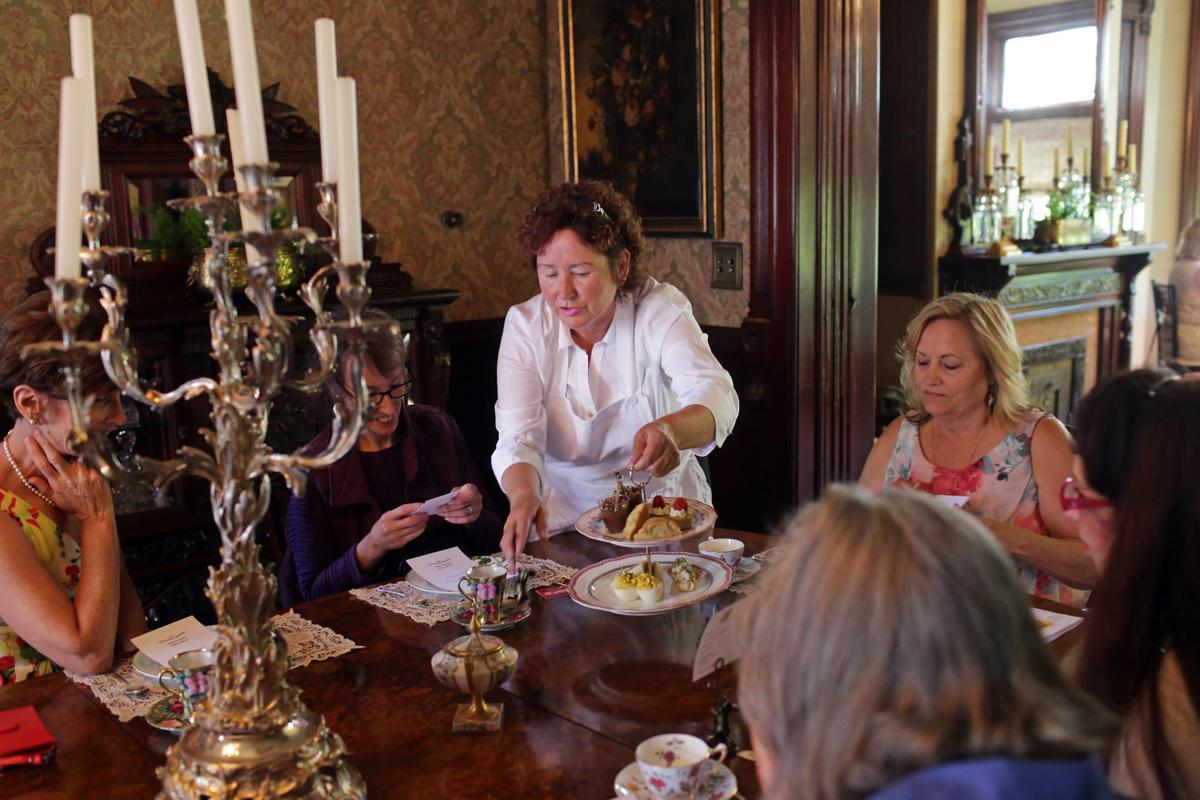 Molly Towey, coordinator at the historic Ackerman Heritage House in Napa, hosted 17 women Sunday for the landmark's monthly afternoon tea and walking tour. Built in 1888 and restored starting in 2010, the Randolph Street house features a combination of original and period-correct furnishings, as well as 17 of the 25 original stained-glass windows. 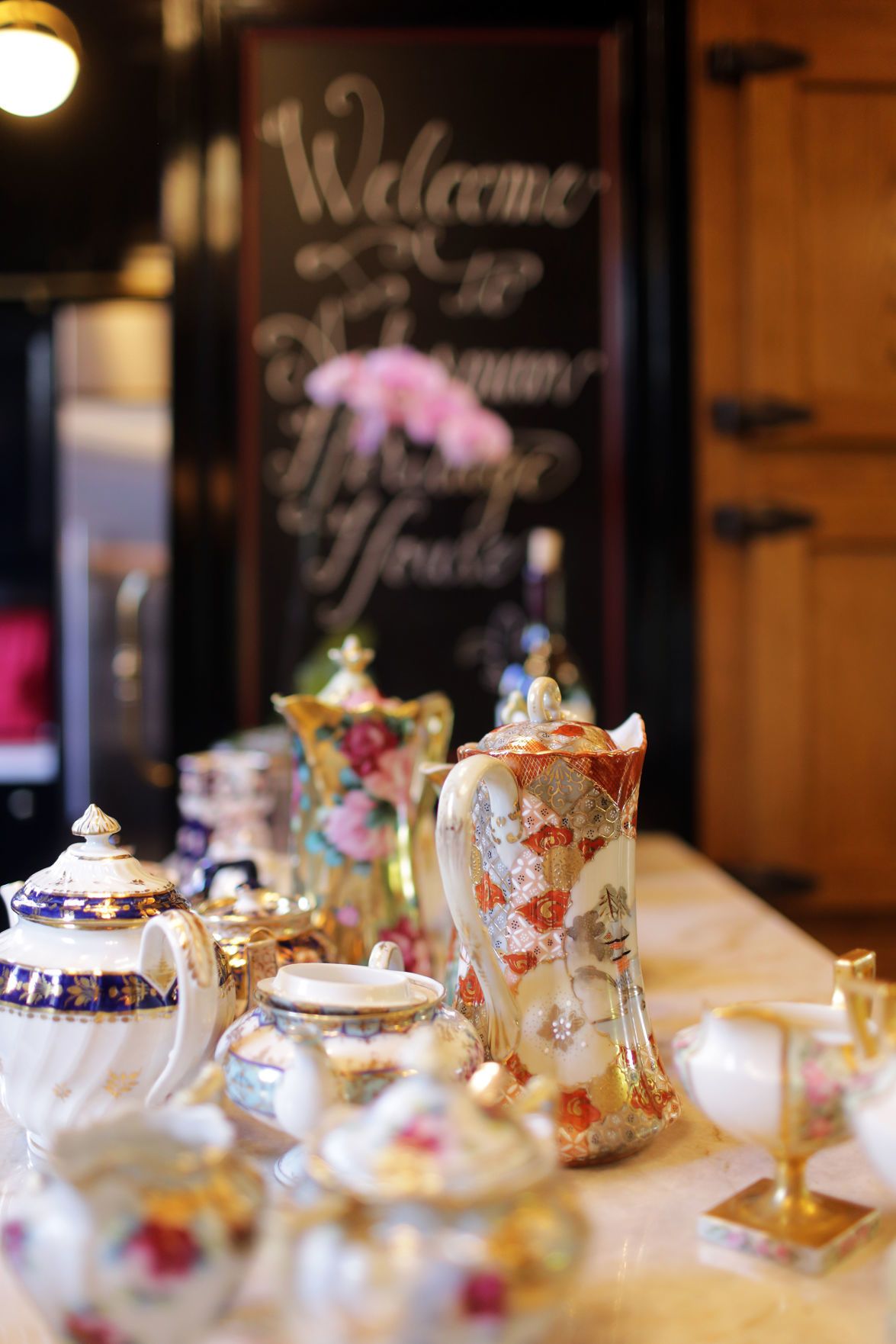 A variety of teapots, teacups and saucers were gathered in the kitchen of the Ackerman Heritage House on Sunday in preparation for a monthly afternoon tea at the historic landmark on downtown Randolph Street in Napa. 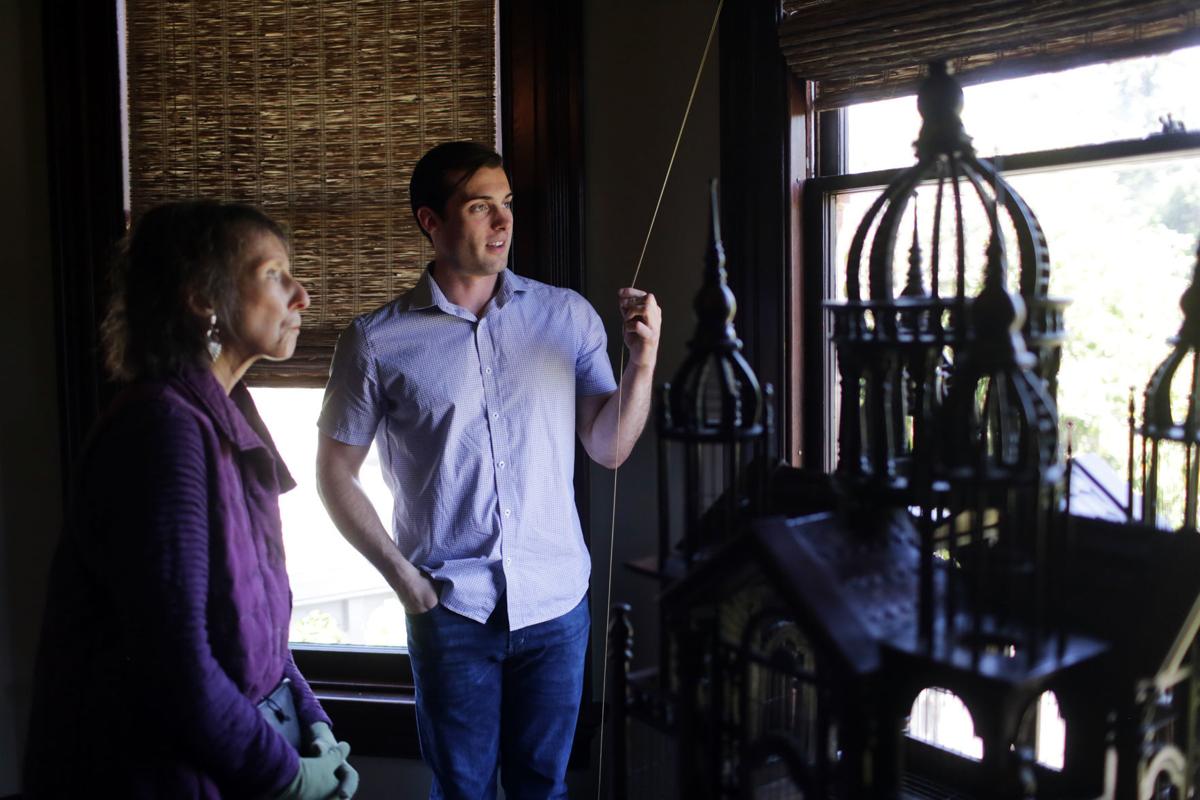 Joe Hinde raises a window shade from the top floor of the Ackerman Heritage House to give visitors on a Sunday afternoon tour a view of the surrounding Napa neighborhood. At front right is a hand-carved birdcage that was an original furnishing of the Randolph Street home, which was built in 1888. 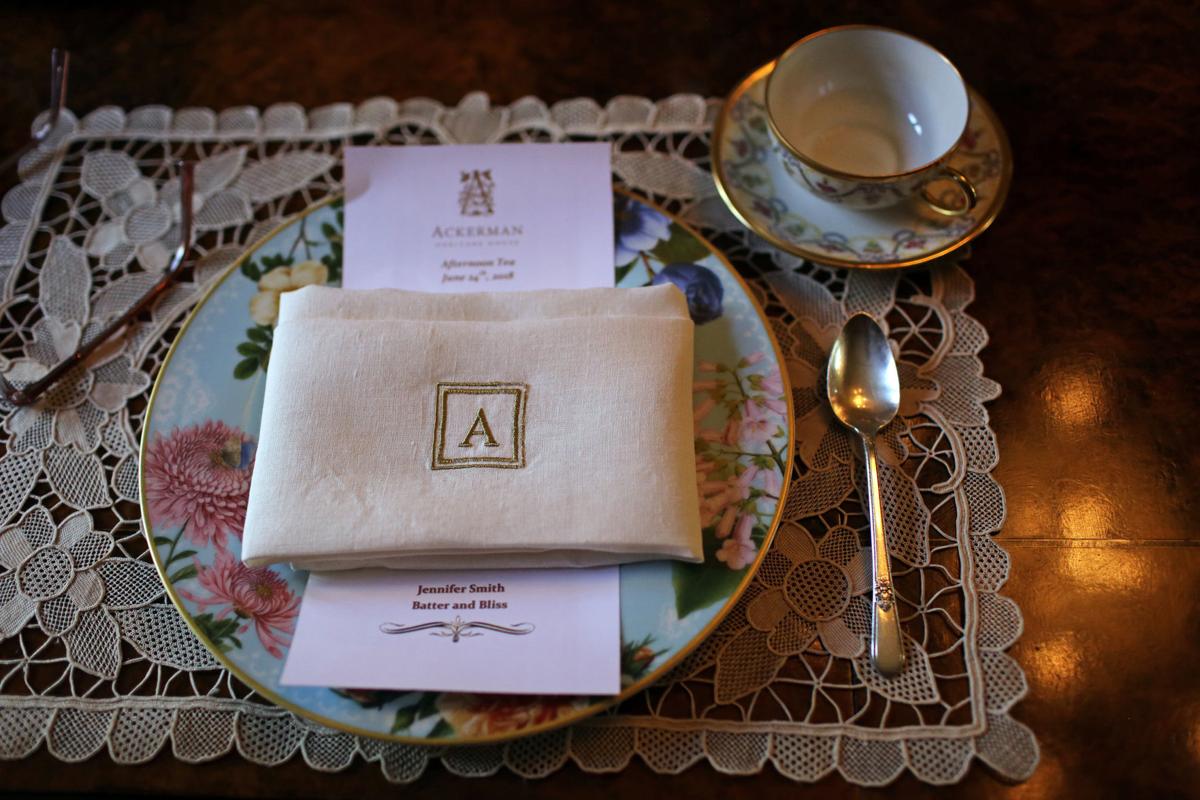