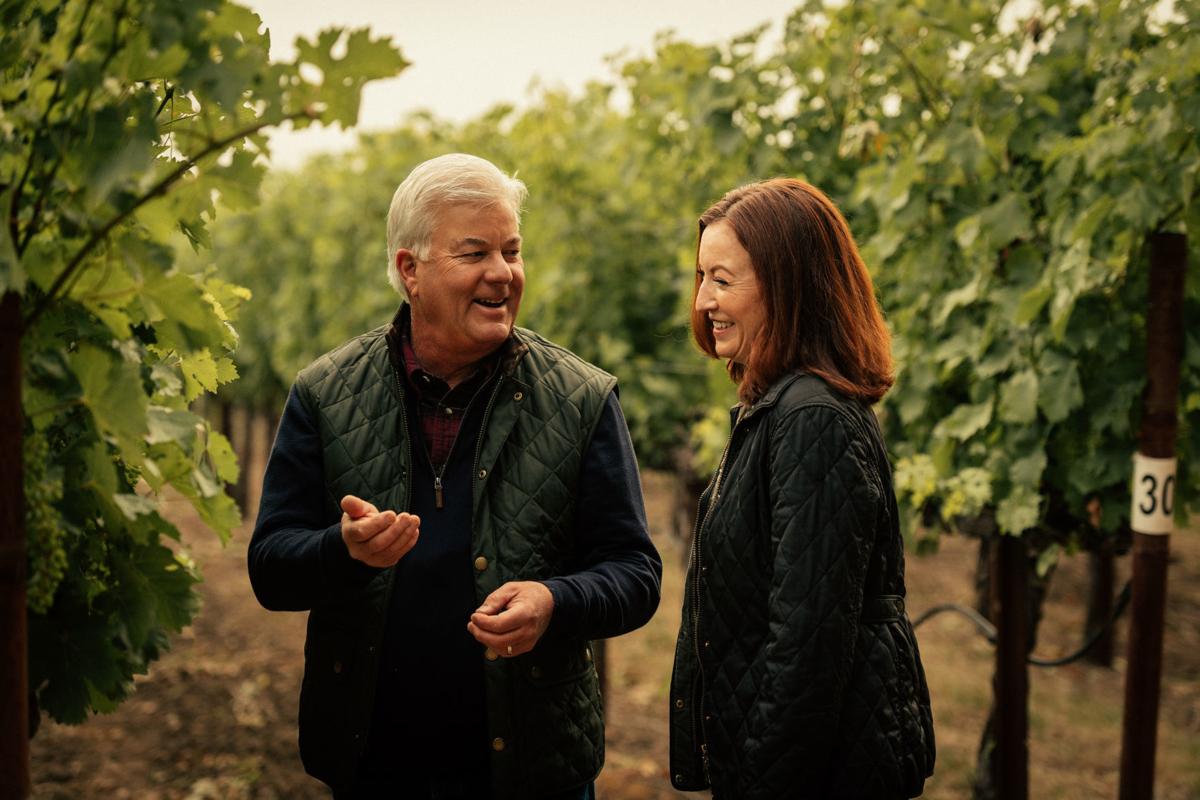 Ted Edwards and Kristy Melton have worked as a team this past harvest. In 2020, Edwards will transition to the role of winemaker emeritus, handing the lead reins to Melton. 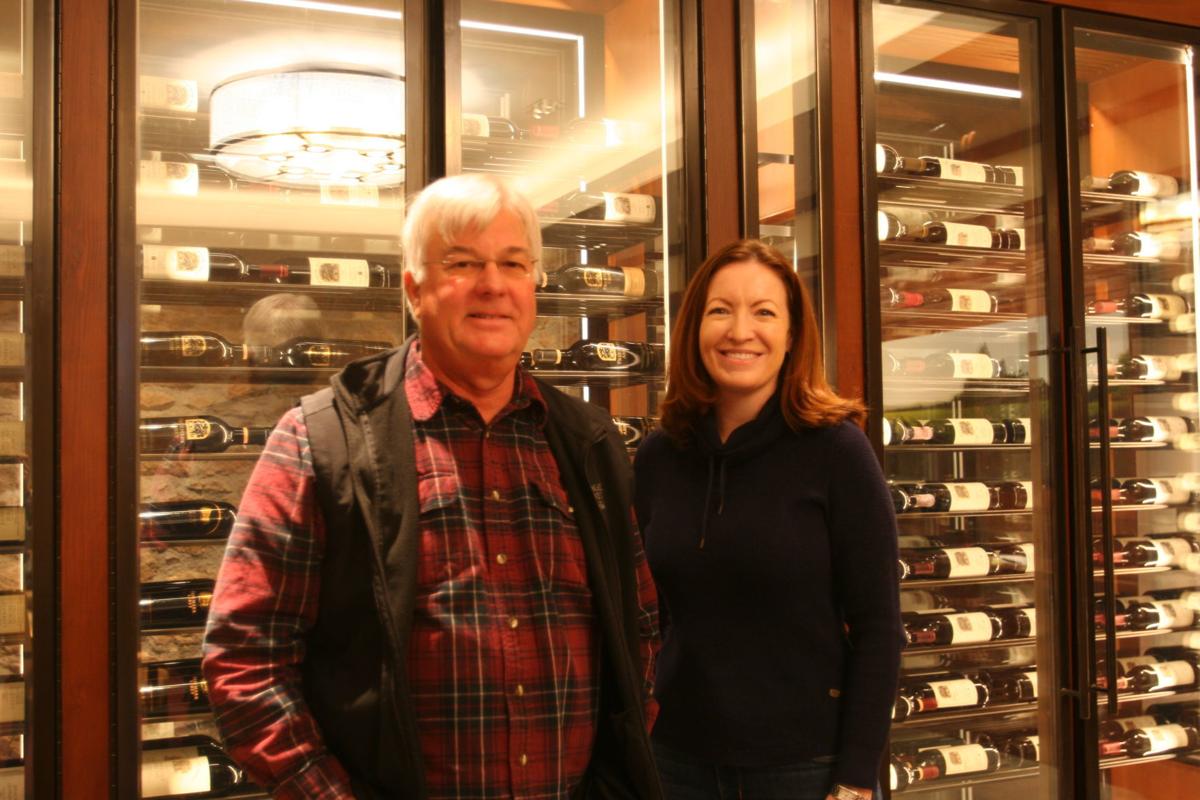 Ted Edwards and Kristy Melton stand in front of Freemark Abbey's display of its library wines. Edwards, head winemaker for the better part of the last four decades, is helping Melton phase into her role as his successor. 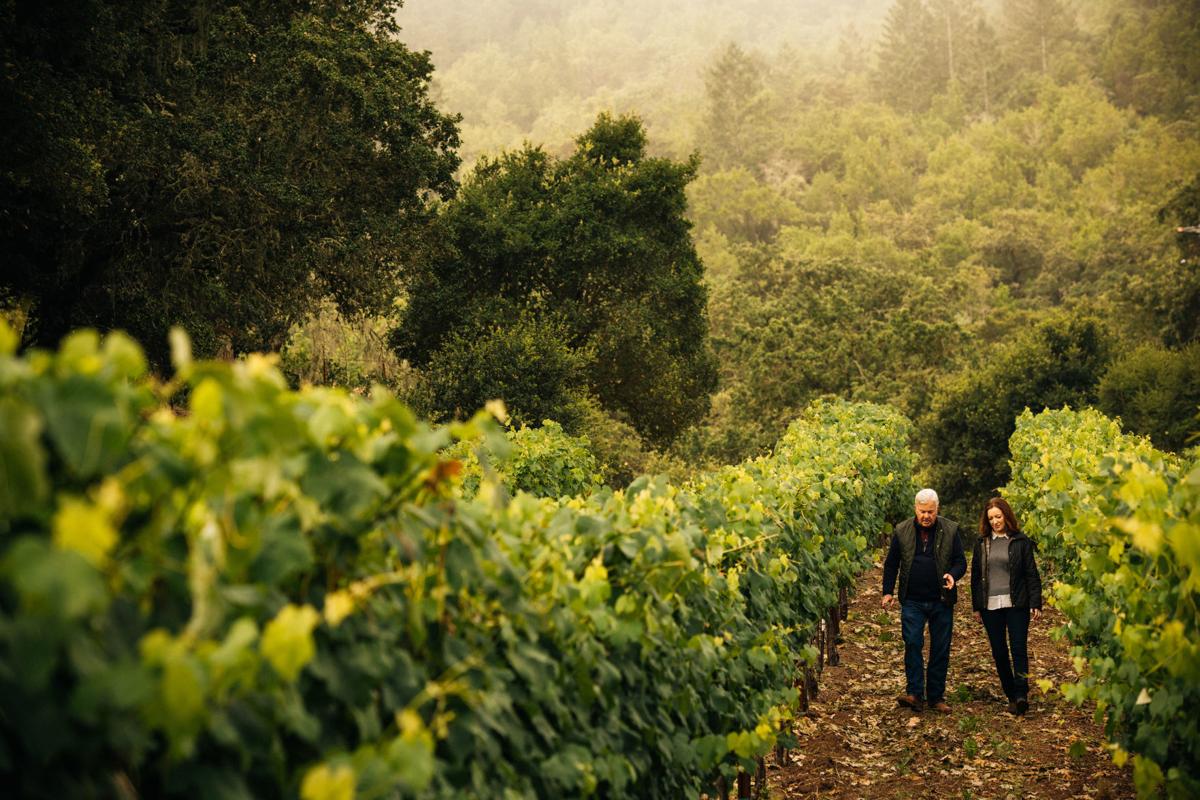 Ted Edwards and successor Kristy Melton walk vineyard rows together. It's something they've done often over the past year as Edwards has helped to train Melton to take over as winemaker at Freemark Abbey, a position he's held for almost 40 years. 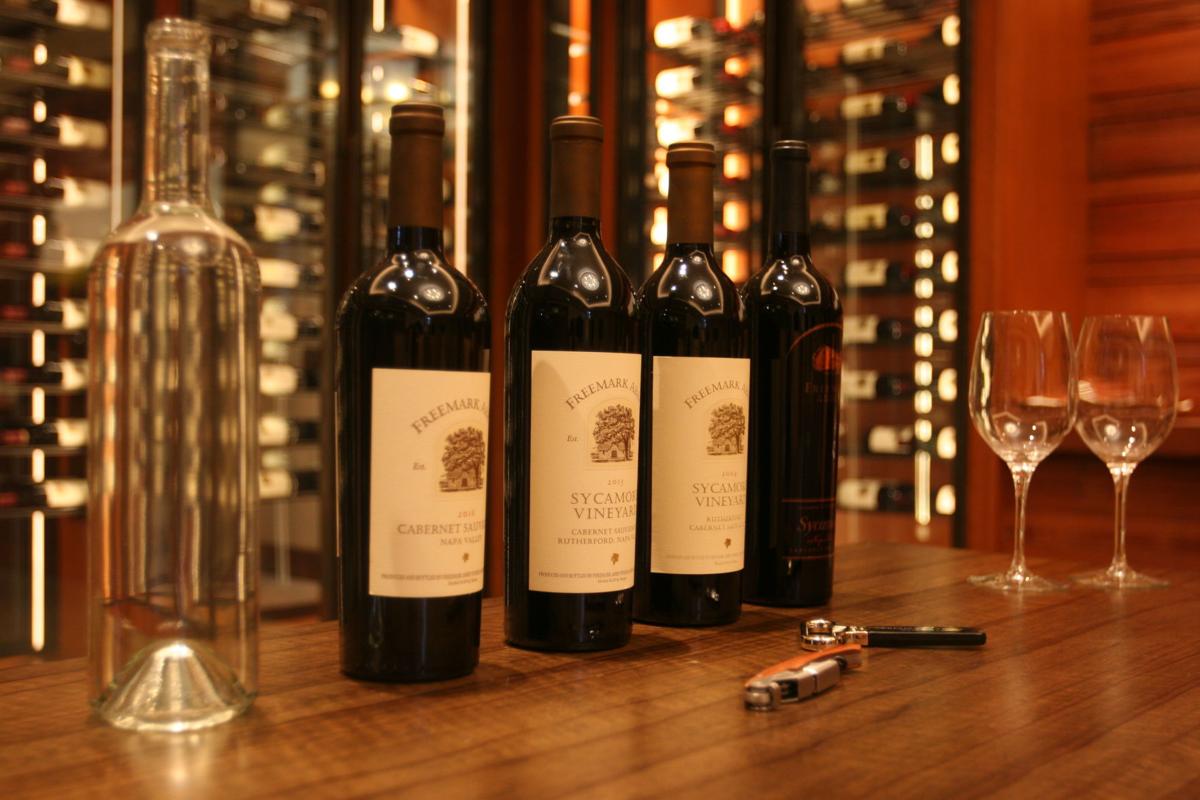 Ted Edwards and Kristy Melton have worked as a team this past harvest. In 2020, Edwards will transition to the role of winemaker emeritus, handing the lead reins to Melton.

Ted Edwards and Kristy Melton stand in front of Freemark Abbey's display of its library wines. Edwards, head winemaker for the better part of the last four decades, is helping Melton phase into her role as his successor.

Ted Edwards and successor Kristy Melton walk vineyard rows together. It's something they've done often over the past year as Edwards has helped to train Melton to take over as winemaker at Freemark Abbey, a position he's held for almost 40 years.

ST. HELENA — It’s a sentiment shared by most winemakers – no two vintages are exactly alike. If you lined up and tasted your way through Freemark Abbey’s Sycamore Vineyard Cabernet, for example, you’d likely find each vintage markedly individual.

Even using grapes from the same vineyard, the 1999 is less tannic than the 2004, which seethes with the aroma of cedar. The 2015 vintage is youthful, structured, a visibly deeper red in the glass.

What the three wines do have in common, though, is Ted Edwards.

Edwards has been Freemark Abbey’s head winemaker since 1985. He first arrived at the winery an assistant winemaker in 1980, then spent a few years at Rutherford Hill, under the same ownership. Edwards’ fingerprints are on something close to four decades of Freemark Abbey Wine.

Now, for the first time since 1985, Edwards is changing titles. Beginning in 2020, he’ll assume the position of winemaker emeritus at Freemark Abbey, a position not only new for him, but for the winery itself.

It’s not retirement, but a step back for Edwards, who spent the last year working closely with his successor, Kristy Melton.

Melton was born the year Edwards began at Freemark Abbey. Despite the difference in their timelines, the two have similar stories: both came from farming families, grew alfalfa and rode horses.

Both have a background in biology and got their masters in winemaking from UC Davis.

This next year will be “a handing over of the reins” for Edwards.

“I see this as an opportunity,” he said. “After 40 years, I think it’s responsible for me to plan my succession. If you’re going to do a transition, you need to have somebody come in and take over, rather than just walking out the door.”

Jackson Family Wines, which has owned Freemark since 2006, embraced the idea of a transition. Melton joined Jackson in 2016. She was friendly with Edwards, familiar with Freemark wines and interested in the job.

“Coming to know Kristy and her abilities, I’m overjoyed that she’s here and going to be taking over,” Edwards said. “It brings me a great sense of confidence.”

“I always want to be able to call him and say, ‘Hey, I’ve got this blend. I’d really love for you to come taste it,’” Melton added. “He has great perspective, history and advice. That’s a real luxury.”

They spoke in front of a display housing more than half a century’s worth of library wines. Freemark Abbey’s partners began the practice of stowing a percentage of each year’s harvest for rerelease in 1967, a show of incredible foresight for the time. Edwards gestured to the collection.

“I have my own personal sense of ownership of everything,” he said. “You look at this library, and I’ve probably made most of those wines there. I couldn’t just hand this off to anybody.”

How Edwards got here

For Edwards, it all began with a glass of Chardonnay.

Having recently completed his masters, he carpooled to Napa for his interview at Freemark Abbey with a friend – a fellow grad student interviewing for the same position.

“We drove over together, and I said, ‘Well, you can go first,’” Edwards said. “I went and had a glass of Chardonnay, and by the time I went in, I was relaxed. It worked out well. I got the job.”

Until then, it hadn’t been a linear path for Edwards, a biochemistry major as an undergraduate at Davis. After graduating, he worked for a professor there, a plant scientologist, who had him do work with alfalfa. (“It was kind of like circling back,” he said, laughing, referencing his family’s background in agriculture.) There was a graduate student in the same lab doing the work Edwards was doing with grapevines; Edwards volunteered to help him, and grapes began to pique his interest.

“I sat in on a class (on wine), and I thought, “Oh, man. This is going to be perfect for me,’” Edwards said. He saw it as a mix of his interests in biology and science and was drawn to the flavor development aspect. He signed up to get his masters in winemaking shortly after.

Edwards tells the story of Freemark Abbey just as aptly as his own. The earliest iteration of Freemark Abbey was established by Josephine Tychson, an early female vintner, in 1886. It changed hands several times after she sold it a few years later, becoming a ghost winery during the dormant period punctuated by Prohibition. In 1939, the winery was purchased by Charles Freeman, Mark Foster and Abbey Ahern, the ‘Free’ ‘Mark’ and ‘Abbey’ that make up the name of the winery as it exists today.

After Ahern passed away in the mid-1950s, the winery once again fell into a dormant period. In 1967, it was purchased by Rutherford residents – the Carpy and Wood families, and their partners. At the time, Edwards said, it was one of something like 14 wineries in Napa, and the first, purportedly, with a tasting room.

“These guys were real pioneers, salt-of-the-earth people,” he said. “It was those families that hired me in 1980.”

He bonded with the partners, who took him under their collective wing. They formed something “almost like a father-son relationship,” Edwards said.

In 1992, he became a partner at Freemark; he served as managing general partner following the death of his friend and mentor Chuck Carpy in 1996 until the families sold the winery in 2001. The buyer, an investment company, wouldn’t complete the sale unless Edwards stayed on. He did.

Freemark sold again in 2006 – this time to Jackson. Founder Jess Jackson, too, asked him to stay.

“I think it was important to Jess. He loved the history – he loved my history,” Edwards said. Access to Jackson’s resources meant “the world changed” for Edwards – he had more tank space, more access to vineyards across the valley for Freemark’s Napa Valley Cabernet.

Still squared in front of the display of Freemark’s library wines, Edwards uncorked and tasted his 1999 Sycamore Vineyard Cabernet. It’s the product of a vineyard that’s worked exclusively with Freemark since 1984.

“This gives me goosebumps,” he said.

“Through all these wines, through decades, Ted and the vineyard have been the consistents,” Melton said, looking on.

Edwards did not begin as head winemaker with any kind of explicit intention to remain at Freemark Abbey for the better part of the next four decades: it “just fell together,” he said.

His tenure makes him simultaneously history’s witness and part of the fabric of history itself; he surfed developments and trends in viticulture, winemaking and the roaring burst of Napa as a tourist attraction.

Those weren’t things he necessarily saw coming; in the 1980s, when Edwards arrived, he could barely see past all the work there was to do. The valley’s vineyards had begun to succumb to a deadly vine disease, and there was replanting to do — on a massive scale.

“In the ‘80s and ‘90s, we were progressively replanting everything. And you can’t just go out and replant all at once,” Edwards said.

Replanting is a gradual process; vineyards must be given time to reach their full potential. It demands patience and careful curation – an investment for wineries and growers, but a necessary one. It’s similar, it could be said, to the process of phasing in a new winemaker.

Dust in the wind (and fog): The Rutherford Dust Society puts on a 25th anniversary show in San Francisco.