The 72-bed, $16.7 million Napa County reentry facility being built near the Syar quarry along Highway 221 should be finished in October. The facility is to help inmates transition to life after jail with the goal of reducing recidivism. 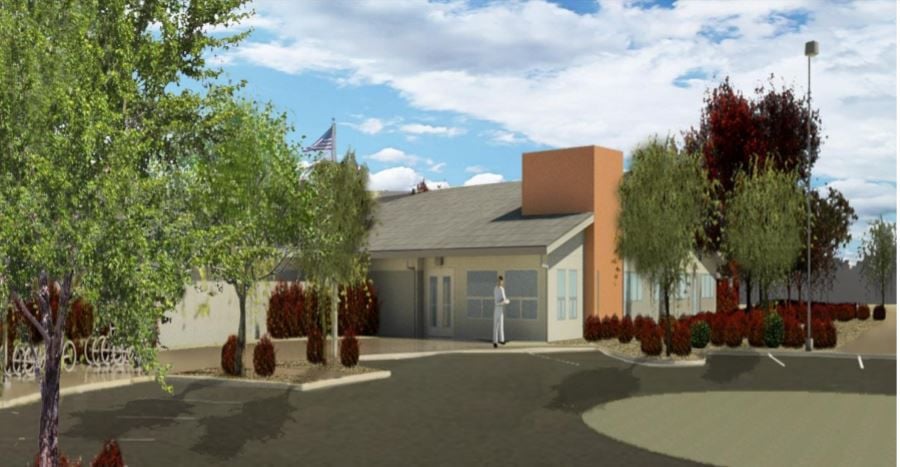 This sketch portrays Napa County's planned reentry facility at its Justice Center property near the Syar quarry. Construction should be finished in October.

Those buildings going up on Napa County’s 27-acre property along Highway 221 near Syar Industries are not the long-talked-about replacement jail, but rather a precursor that the county values in its own right.

This is the $16.7 million, 72-bed reentry facility that should open by year’s end, providing a place for low-risk inmates to learn life and job skills. The county’s goal is to help them transition to life after jail and not return.

Meanwhile, the county continues to make plans to build a $128 million, 304-bed jail on the same property to replace the downtown Napa jail. Construction is to begin in 2020 and the jail is to open in 2022.

Together, the reentry facility and replacement jail will create what the county is calling the Napa County Justice Center. Last week, the Napa County Board of Supervisors heard an update on the center.

That update included a description of the soon-to-be-completed reentry facility that is a jail with a difference.

“Even though it has a secure perimeter, there is a lot more availability for the folks to be moving about the building, as well as get out into the community,” Chief Probation Officer Mary Butler said.

Inmates might leave to go to specific locations, such as to a job or classes, she said. Another idea is to use inmates once again for the county’s free chipping program that helps dispose of fuels in wildfire-prone areas.

Staff from the corrections and probation departments will run the facility.

The reentry facility is costing $16.7 million, with another $6.7 million needed for offsite utilities, for a total of $23.4 million. Of that, $13.4 million is coming from the state and $10 million from the county.

Napa County figured out the funding for the reentry facility a few years ago. The financing plan for the $128 million jail remains a work in progress, though the main features are in place.

Supervisor Alfredo Pedroza said he wants to continue to have updates on the jail.

“There is so much we have to address and tackle,” Pedroza said. “And this is a huge commitment for Napa County in terms of how much debt we’re taking on, how much money we’ve had to set aside to get to this point.”

Supervisors received some welcome news on the debt side. As of June 2017, the county expected to have to take out a $50 million loan for the new jail. In May of this year, it revised the loan to $20 million. The latest plan is for a $15.6 million loan.

That loan continues to shrink as the county’s anticipated Educational Revenue Augmentation Fund (ERAF) receipts grow. ERAF is tax money received by the county after making state-required payments for schools under a complicated financing shift imposed by the state during the early 1990s recession.

County officials expect even more good news on the ERAF front next year that could decrease the loan need by another few million dollars.

Key components of the financing plan include $36.7 million in ERAF money from multiple years, $36.6 million from the county general fund, $23 million from a state grant and $12.8 million from property sales, such as the county’s Water Street land in the city of Napa’s Oxbow area.

Meanwhile, some still say the county should rethink its plan to replace the downtown jail with a new, bigger jail at another location.

“When you talk about the jail in the community, expanding the jail is not a popular idea,” Napa City Council candidate James Hinton told supervisors.

Supervisor Diane Dillon said the county is doing the right thing in building the new jail. She talked about a history of the project that included a long study session a few years ago that outlined the need.

“This has been studied repeatedly,” Dillon said.

Supervisors took another step Tuesday toward building the new jail. They approved signing a $9.8 million contract with Lionakis through June 30, 2019 for architectural engineering and design services.

Napa County is poised to start building what amounts to a correctional campus along Highway 221 near the Syar quarry, with a re-entry facility…

Napa County might create a sort of New Jail Financing 101 for the taxpaying public, if it heeds the grand jury’s advice.

Napa County after years of effort has come up with a $128 million financial plan that could see a new, 304-bed jail built along Highway 221 in…

Napa County is opening a $23.4 million, 72-bed jail reentry facility for low-risk inmates that looks nothing like a typical jail.

Napa County supervisors have a message for planners working on the $128 million replacement jail – stay on budget.

Napa County has yet to move the first inmate into its new, $23.4 million reentry facility four months after holding the grand-opening ceremony.

Protect our schools and educators

Napa County is spending $51 million from an arcane funding source on a new jail, while the state has contended that some of these dollars should be helping California pay for schools.

The 72-bed, $16.7 million Napa County reentry facility being built near the Syar quarry along Highway 221 should be finished in October. The facility is to help inmates transition to life after jail with the goal of reducing recidivism.

This sketch portrays Napa County's planned reentry facility at its Justice Center property near the Syar quarry. Construction should be finished in October.