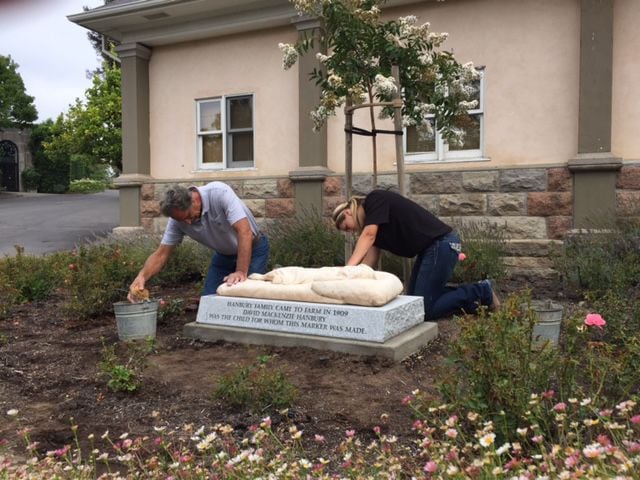 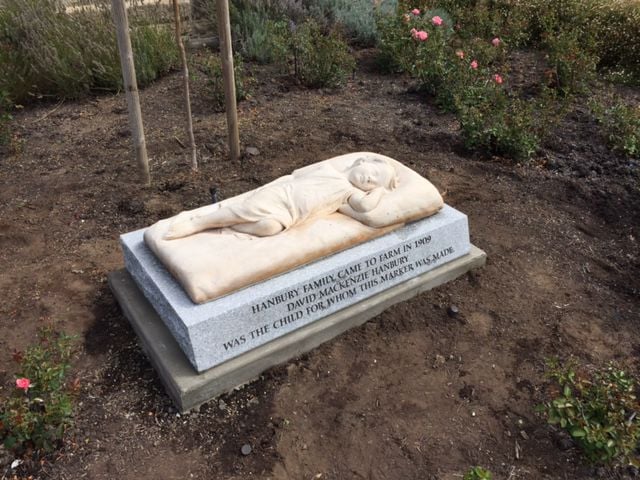 A marker at Tulocay Cemetery may need to be revised after questions arose about the identity of the child carved in marble. 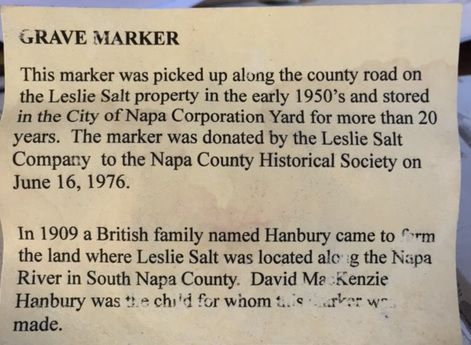 A note that was attached to a marble grave stone indicated the stone belonged to a youth who passed away name David MacKenzie Hanbury. New information casts doubt on the printed account.

A grave marker recently installed at Tulocay Cemetery has local historians scratching their heads about exactly who the memorial was created for, how it ended up in Napa and the fate of the intended.

The mystery began when a 500-pound white marble grave stone, carved in the image of a young child peacefully sleeping on a bed, was found during the Napa County Historical Society’s recent relocation.

Due to damage to its offices at the Goodman Library, the nonprofit had to move to a new office, which just so happens to be at Tulocay Cemetery.

While moving items, Historical Society board member Scott Sedgley came across the grave marker. It was not inscribed with any writing. Instead, a printed note accompanied it.

“The marker was donated by the Leslie Salt Company to the Napa Historical Society on June 16, 1976,” read the note.

It was reportedly picked up along a country road on the Leslie Salt property in the early 1950s and stored in the city of Napa Corporation Yard for more than 20 years, the note stated. The salt ponds were located in the Green Island Road area.

“In 1909 a British family named Hanbury came to farm the land where Leslie Salt was located along the Napa River in South Napa County,” it continued. “David MacKenzie Hanbury was the child for whom this marker was made.”

Sedgley said the story of this young child so inspired him that he wanted to make sure the stone didn’t get stored away for another 40 years.

“It didn’t seem appropriate to have it stuck in a corner somewhere,” said Sedgley. “It should be in a place of respect and dignity.”

After all, as the note on the stone indicated, “It belongs to a child in a family,” he said. “It should be in a cemetery.”

After Sedgley contacted monument maker Steve Simich of Napa Marble & Granite Works, Simich agreed to inscribe a new base for the stone with the child’s name.

Peter Manasse, executive director and manager at Tulocay Cemetery, agreed to place the stone in a prominent space, right in front of the old cemetery office. Landscaping was replanted and about a month ago the stone was installed.

David MacKenzie Hanbury’s name was etched into a new granite platform, a tribute to a young Napa County resident.

“It’s beautiful,” said Sedgley of the new memorial space. Even though the remains of Hanbury were not recovered, “It’s just the perfect setting” for a final resting place in Hanbury’s memory, he said.

Information unearthed after the new base and stone were already installed shows that David MacKenzie Hanbury, who was born in Santa Cruz in 1910, didn’t die as a young man.

He lived until at least his mid-30s, moved to Europe to attend Oxford University, got married in England in 1931 and later worked as a hotel proprietor, according to newspaper and immigration records.

So who does the stone belong to?

“God only knows … who that poor child was,” said Nancy Levenberg, executive director at the Napa County Historical Society, when presented with the new research. There are no birth or death records of a second child born to the Hanburys, so it’s not likely that another child was born with that same name to the same parents, she said.

“That is a twist,” said Simich, after hearing the same news.

Sedgley said that he was a little disappointed to hear that the facts about David MacKenzie Hanbury don’t match the information that had been attached to the stone.

“History sometimes gets convoluted,” Sedgley acknowledged. The Hanbury connection is now questionable. But “It was in memory of some little child and so at least we have respected it and put it in a place of reverence.”

Levenberg said the etching of the Hanbury name would be corrected. However, that doesn’t change how she feels about preserving the stone.

“Whoever the child is that this was designed to memorialize deserves a resting place.”

“The fact that Tulocay Cemetery, Simich and Sedgley (came) forward to do this out of the goodness of their hearts” is equally notable, she said.

Ultimately, “It would be nice to know” who the marker was made for, she said. “Some family loved a child so dearly” that they paid a significant amount of money for such a stone.

Such historical errors are not unusual, Levenberg said.

“It is extremely important to us to be accurate and find original, written documentation” for any item placed in the Napa County Historical Society collection, but history can change when new information comes to light.

“People wrongly attribute things all the time,” Levenberg said. “History is continually being written and corrected.”

Manasse said he felt the stone was in the right place, whether it is Hanbury or not.

“I think it’s obvious” the person who died was a child, he said. “If we can find out more about it, I’m always willing to listen.”

Simich doesn’t think the marble marker was stolen from another area and dumped at the Hanbury parcel. The marble piece,— about 22 inches wide, 4 feet long, 8 to 10 inches thick — weighs about 500 pounds.

“It’s a big piece of marble. I don’t think two people could even pick that up.”

“That wasn’t an inexpensive monument to have made,” he noted. To buy a piece of marble today and have it carved in such an image could cost as much as $5,000 to $8,000, said Simich. “Somebody didn’t spare any expense.”

Simich doesn’t regret donating his time to create the inscribed platform for the marker.

“Not at all,” he said. “I still think there is somebody out there” who it was intended for, he said.

“The family probably moved away and he was left there by himself.”

The thought tugs on your heartstrings, he said.

The Hanburys and the 'Belle of Vallejo'

Just who was David Mackenzie Hanbury, the subject of a related story on napavalleyregister.com? And how did his family end up in the Napa Valley?

For 160 years, it’s been the resting place of Napans from all walks of life, from city founders to those known only by family.

The Milliken Creek Bridge is again intact, having recovered from a car wreck and an earthquake.

A marker at Tulocay Cemetery may need to be revised after questions arose about the identity of the child carved in marble.

A note that was attached to a marble grave stone indicated the stone belonged to a youth who passed away name David MacKenzie Hanbury. New information casts doubt on the printed account.