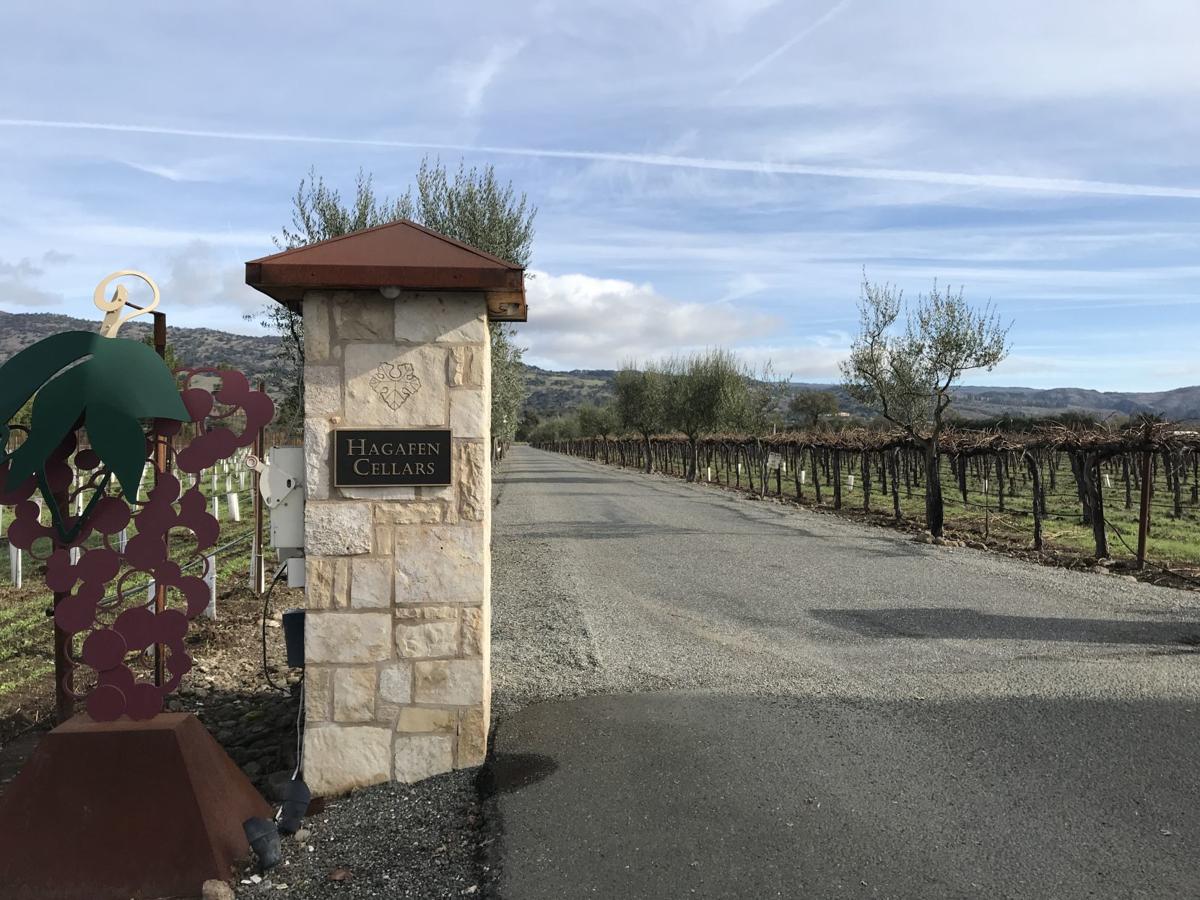 Hagafen's Silverado Trail entrance. The winery produces 10,000 cases of wine annually and has 12 acres of estate vineyards; the Weirs own an additional 9 acres of vineyards where they live in Coombsville. 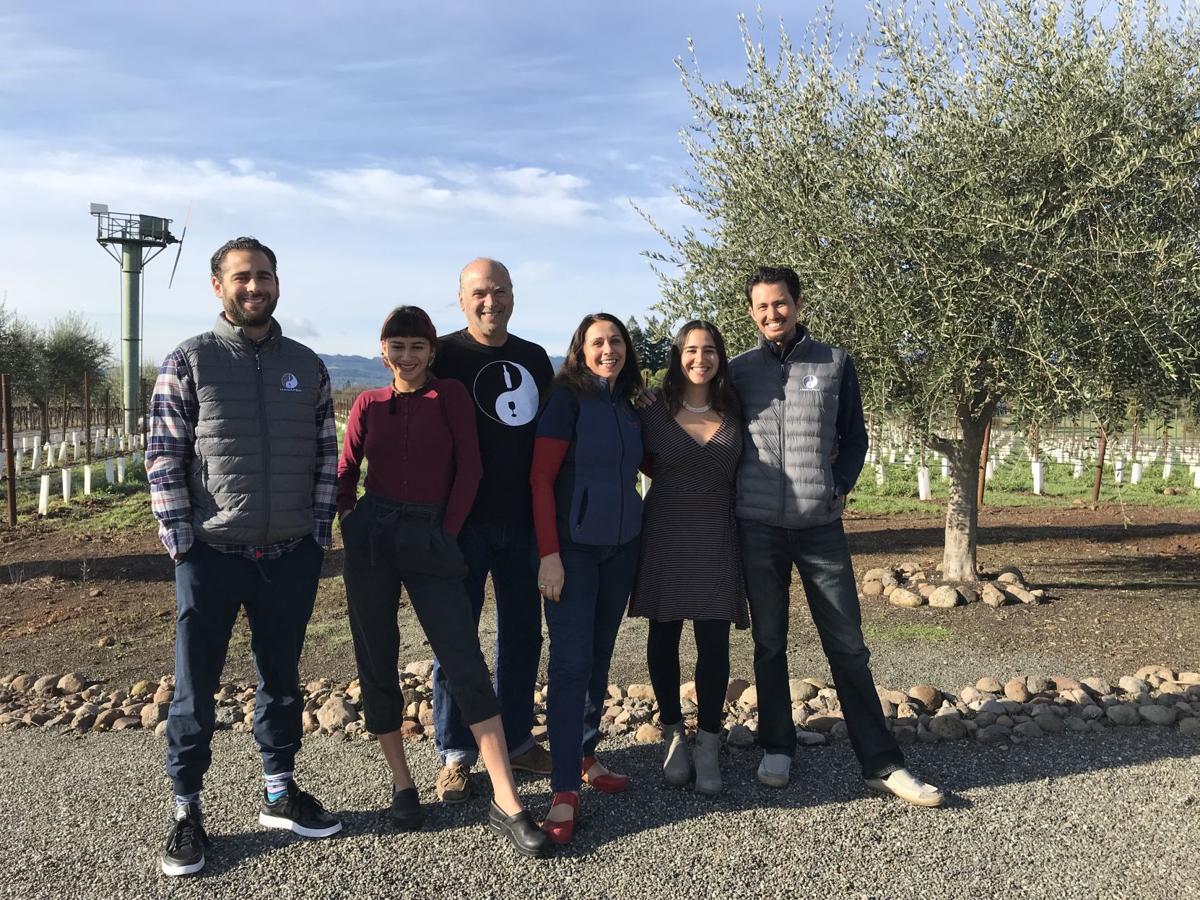 Hagafen Cellars founder Ernie Weir with his family at the winery. At its founding in 1979, Hagafen was the state's first kosher winery, and one of very few nationwide. The Weirs, from left to right: Jonathan, Tamar, Ernie, Irit, Maya, and Maya's husband Gino Pastori-Ng. 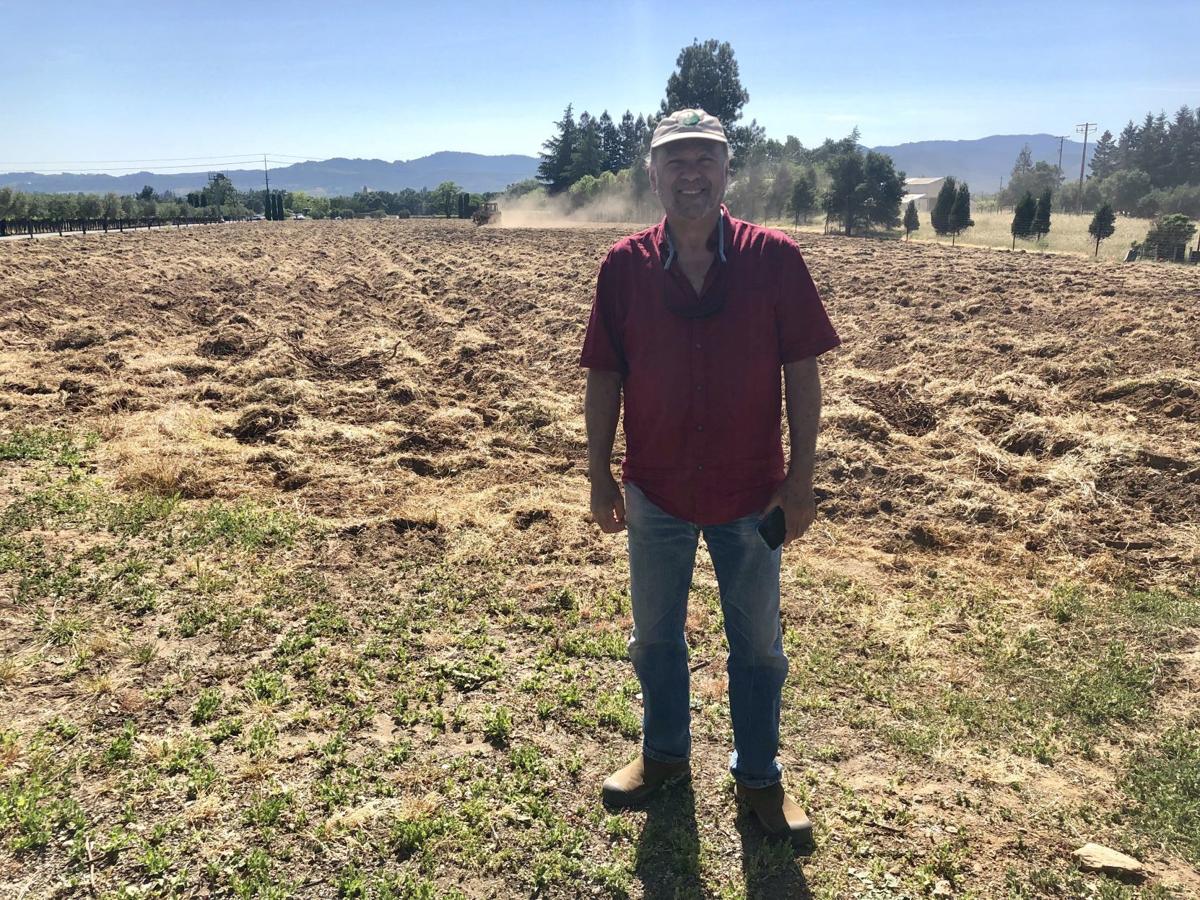 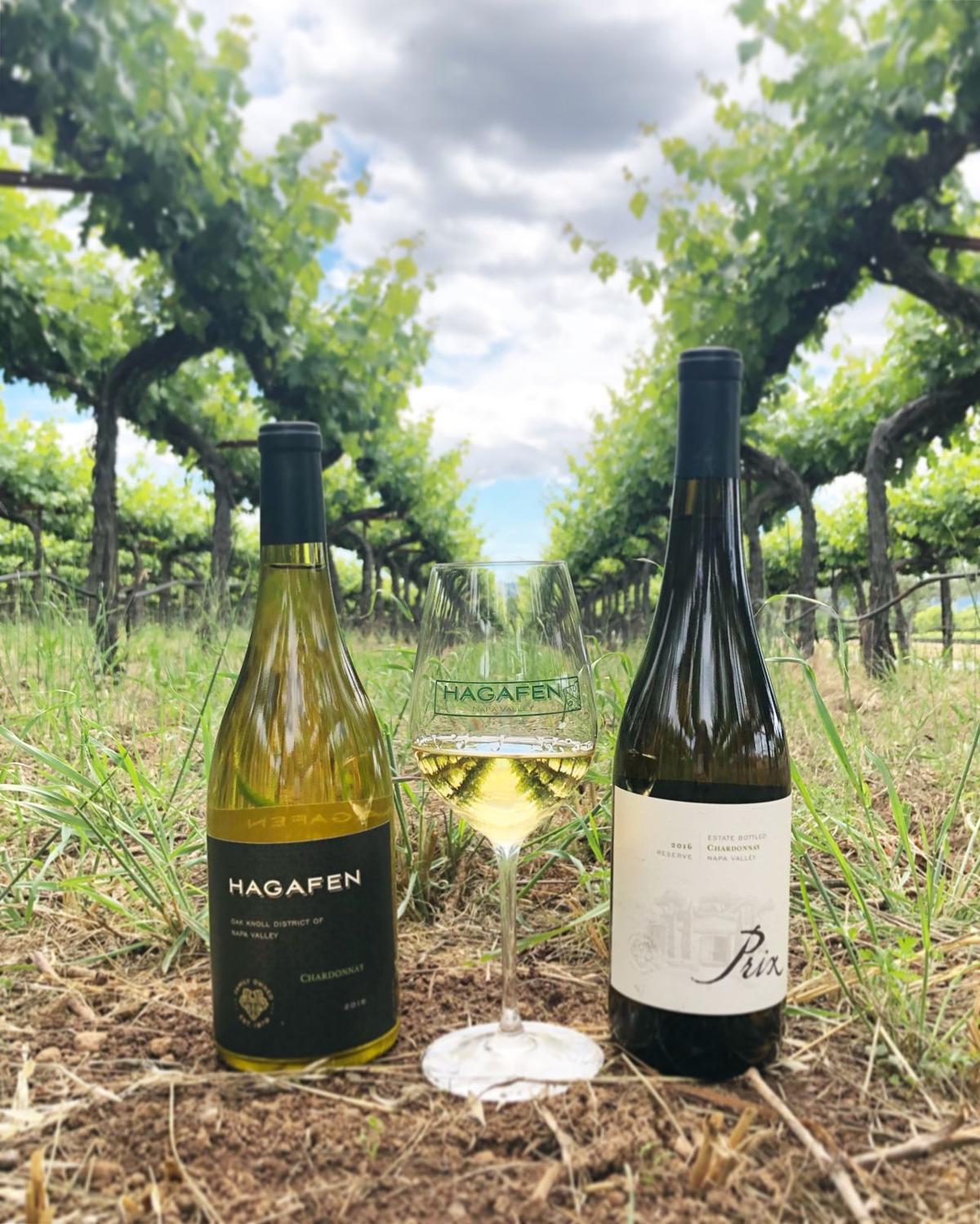 The winery's Hagafen and Prix labels.

Hagafen's Silverado Trail entrance. The winery produces 10,000 cases of wine annually and has 12 acres of estate vineyards; the Weirs own an additional 9 acres of vineyards where they live in Coombsville.

Hagafen Cellars founder Ernie Weir with his family at the winery. At its founding in 1979, Hagafen was the state's first kosher winery, and one of very few nationwide. The Weirs, from left to right: Jonathan, Tamar, Ernie, Irit, Maya, and Maya's husband Gino Pastori-Ng.

The winery's Hagafen and Prix labels.

Technically, all wine is made with kosher grapes.

But that doesn’t mean wine itself is necessarily kosher – in fact, far from it. That, in part, caught the attention of Hagafen Cellars founder and winemaker Ernie Weir.

And he decided to do something about it.

Weir, who studied sociology at UCLA as an undergraduate, wasn’t always on the path to wine. Though he was raised in Los Angeles, he’d long been aware that life in California existed outside of the major cities, and of its “rich and highly developed” agricultural industry, he said. That desire for life outside the urban sphere, his personal connection to wine: those things came together in Hagafen.

“I was really curious about it,” Weir said of the wine industry. “And then the modern era of winemaking began in the mid-’60s, and I caught wind of all that.”

It was then, too, that Weir said he began to notice an uptick in cultural pride from different groups, tied closely to the idea of the United States as a melting pot. He saw it translate over to the wine industry, and was intrigued.

“You could see it in Napa Valley: the Italians were proud of the Italian wineries. It was the same for the French, the Swiss, the Germans,” he said. “I thought, what the heck – we could do something like that, couldn’t we? Wine is in Jewish culture, just as it is in many other cultures.”

That put him on the path.

Weir returned to UC, Davis, for his degree in viticulture and enology; he began work at Domaine Chandon in 1973. In 1979, Weir and his wife, Irit, founded Hagafen Cellars.

Hagafen means ‘the grape vine’ in Hebrew. It’s the last of a nine-word prayer, called Kiddush, traditionally recited over wine.

“My concept was really to mainstream this as much as possible,” he added.

Happenstance aside, Hagafen was the first kosher winery in California, and one of the first nationwide. True kosher wineries were then few and far in between. Kosher wine itself was closely associated with sweeter, thicker wines, according to Jay Buschbaum, director of wine education for Royal Wine Corp., the United States’s largest kosher wine distributor.

Kosher wine made its modern appearance in the United States in the early- and mid-20th century, following successive waves of Jewish immigrants, Buschbaum said. The East Coast saw the growth of vibrant Jewish communities, for which wine is an integral part of almost every major holiday and life event. They turned to the only varietal readily available: Vitis labrusca, or Concord grapes.

“As a result of (Concord’s) low sugar maturity, it makes very bad wine,” Buschbaum said. “So they added sugar to the wine to make it palatable.”

That American-born “sugary, syrupy” wine became the face of kosher labels. It birthed brands like Manischewitz, one of the most famous kosher wines, which Weir jokingly calls “the M-word”. Historically, though, communities made kosher wine from what was available in their region, Buschbaum said.

“Jews in Europe did not drink what we know as sacramental wines,” he added. “In France, they might have had Bordeaux (kosher wine). In Italy, they drank Sangiovese.”

Until the late 1960s, sweet wines were trending with the American consumer, kosher and not. Around Hagafen’s founding, Weir began to notice a shift toward dry wines on both the general and kosher markets. At the intersection of kosher and premium, dry wine, he saw an opening.

Weir had company in Herzog Winery, a subsidiary of Royal Wine Corp. founded in New York in 1948. Herzog also produced premium wines that were kosher, and was working to push kosher consumers away from Concord grape wines, according to Buschbaum. Outside of Herzog, the playing field was fairly empty.

Herzog opened a winery in Oxnard, in Southern California, in 1985; today Herzog also owns several vineyards in Napa and sources grapes from area growers, according to General Manager Joseph Herzog. There are about 20 kosher wineries in California today, according to Rabbi Nachum Rabinowitz.

As a rabbinic coordinator, Rabinowitz oversees the wine portfolio of the Orthodox Union (OU), the supervisorial body that certifies Hagafen wines (and a range of other products) as kosher.

Certified kosher wineries must adhere to kashrut, the guidelines defining what is and isn’t kosher. Wine, for example, must be handled through the winemaking process only by Sabbath observant Jews. Sabbath observant individuals must not perform any kind of work during Shabbat, which falls from sundown Friday until sundown on Saturday.

Kosher winemakers, then, must abstain from working all together on Saturdays, and during holidays like Yom Kippur and Rosh Hashanah, both of which fall during harvest and crush.

“That’s always a challenge,” Weir said, of the mandated time off. He says they can laugh about it now, but they faced a challenging harvest this year. “With the power outages and the holidays falling on a Monday and a Tuesday, we had a double challenge. It was like, okay – so when do we get to work this week?“

The OU helps Weir find eligible workers to handle the wine during harvest – usually it takes two people, who come from all around the Bay Area, to finish out the season. Weir, who isn’t Sabbath-observant, can’t himself handle the wine, but carefully guides the workers with the help of his full-time staff.

There are other kosher labels in Napa, though they’re produced by non-kosher wineries. St. Helena’s Marciano Estate makes a kosher Red Blend, called Terra Gratia; then there’s Covenant Wines, a kosher winery that relocated from Napa to Berkeley in 2014.

Napa is one of the hot spots for premium wine production, according to Gary Freeman, owner and wine buyer for Oakland Kosher Foods.

Weir doesn’t describe Hagafen’s labels as “kosher wines,” – but rather “wine that is kosher.” The semantics, reminiscent of the winery’s mantra, are intentional, he said.

“Talking about our wine – we can talk Cabernet Sauvignon, organic grape growing, that we’re fish-friendly and bee-friendly farmers,” he said. “There are a lot of other adjectives to describe Hagafen that are important to us also.”

In a sentence: “kosher” is not a flavor profile.

Forty years from its founding, Weir remains the owner and winemaker at Hagafen, which he runs with help from his wife and their three children, Maya, Jonathan and Tamar. The winery has three labels: Hagafen, Prix, and Don Ernesto. Orthodox Jews make up a portion of the winery’s business, he said, but Hagafen caters to everyone, be they Sabbath-observant or just a Cabernet-appreciative tourist.

“Some know, but some don’t even know when they leave that there’s anything here having to do with kosher,” Weir said, of the winery’s guests. “They just like the wine.”

2019 marked my arrival at the Register and subsequent dive into Napa's wine industry. The year has also been host to excellent coverage of community news by my colleagues. Here are my top 5.

They purchased a multi-million dollar Napa ranch as 20-somethings. All 17 of them.

Napa County Library's literacy program publishes a newspaper, aimed at those for whom English is a second language.

A creek near Oakville small enough to jump over has become part of a big battle involving trademarks and money.

Multigenerational farming families are increasingly rare in today's world. Napa Valley is home to many.

Have a Great Hair Day

Have A Great Hair Day