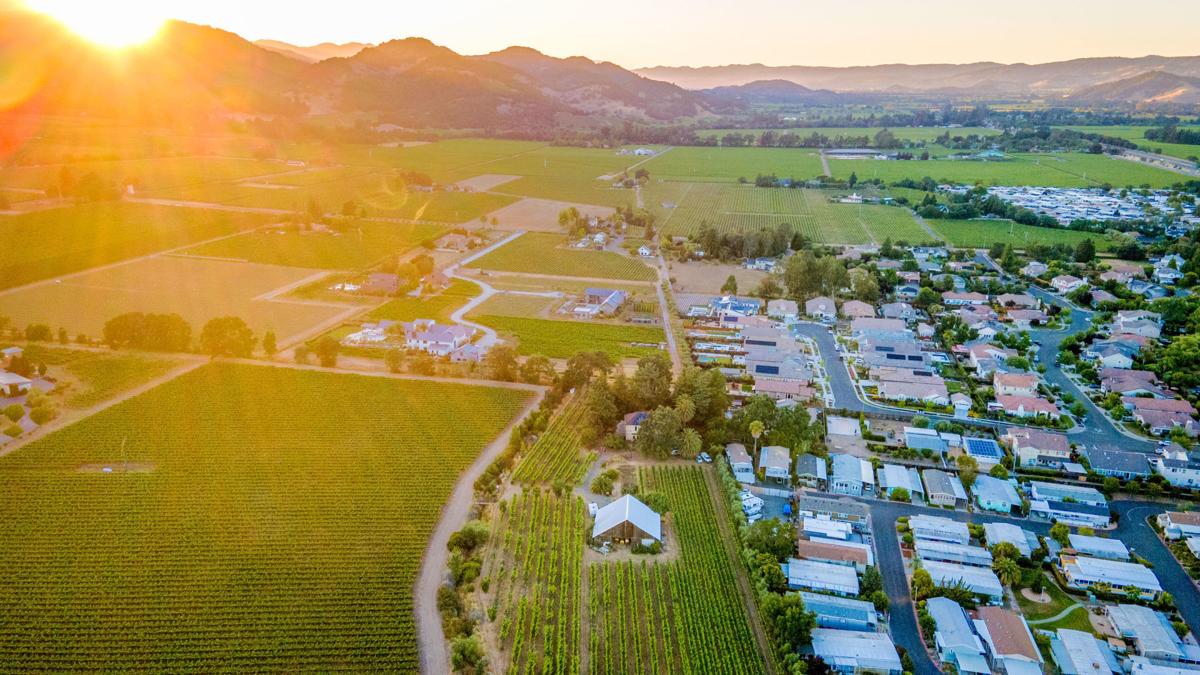 Aerial photo of Matthiassons’ home vineyard in the Oak Knoll AVA on the south-west edge of the city of Napa. 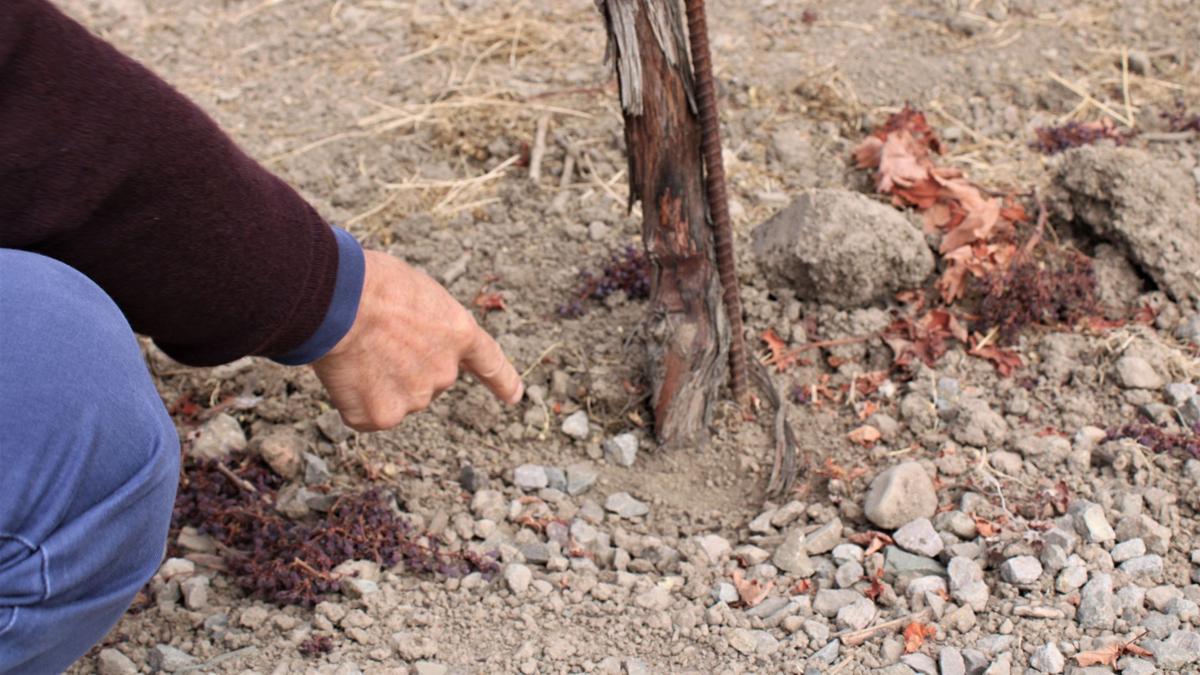 Tod Mostero of Dominus explains how they manage the estate as a dry farmed vineyard, meaning they do not irrigate their vines. 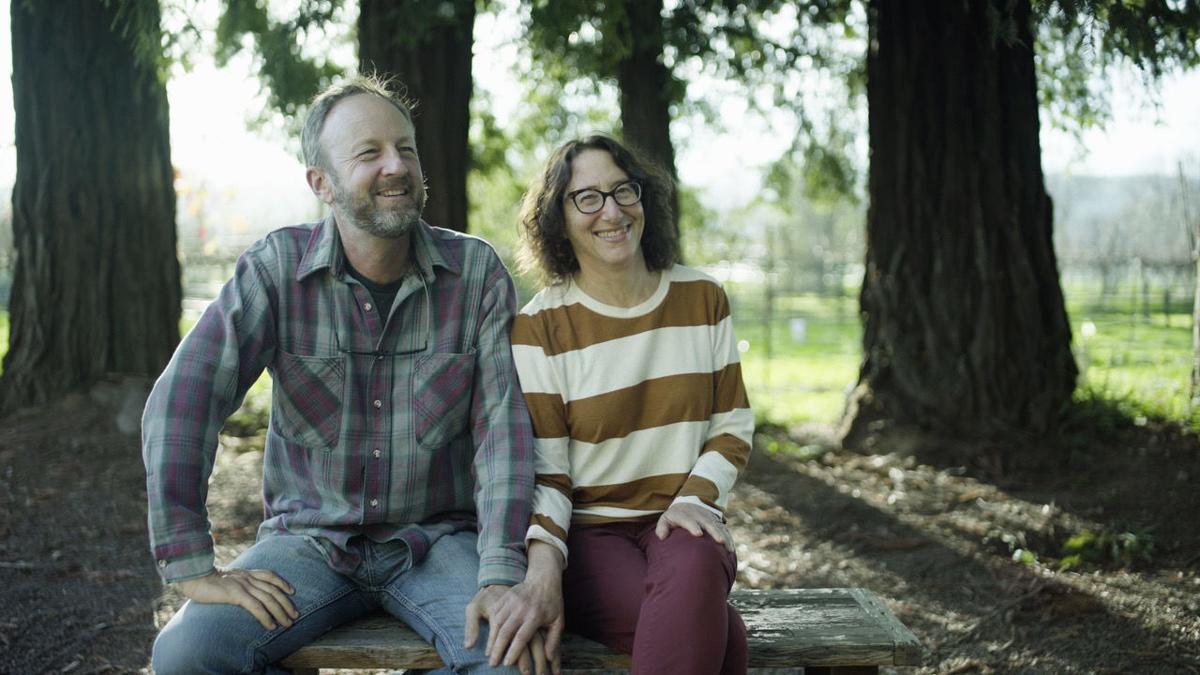 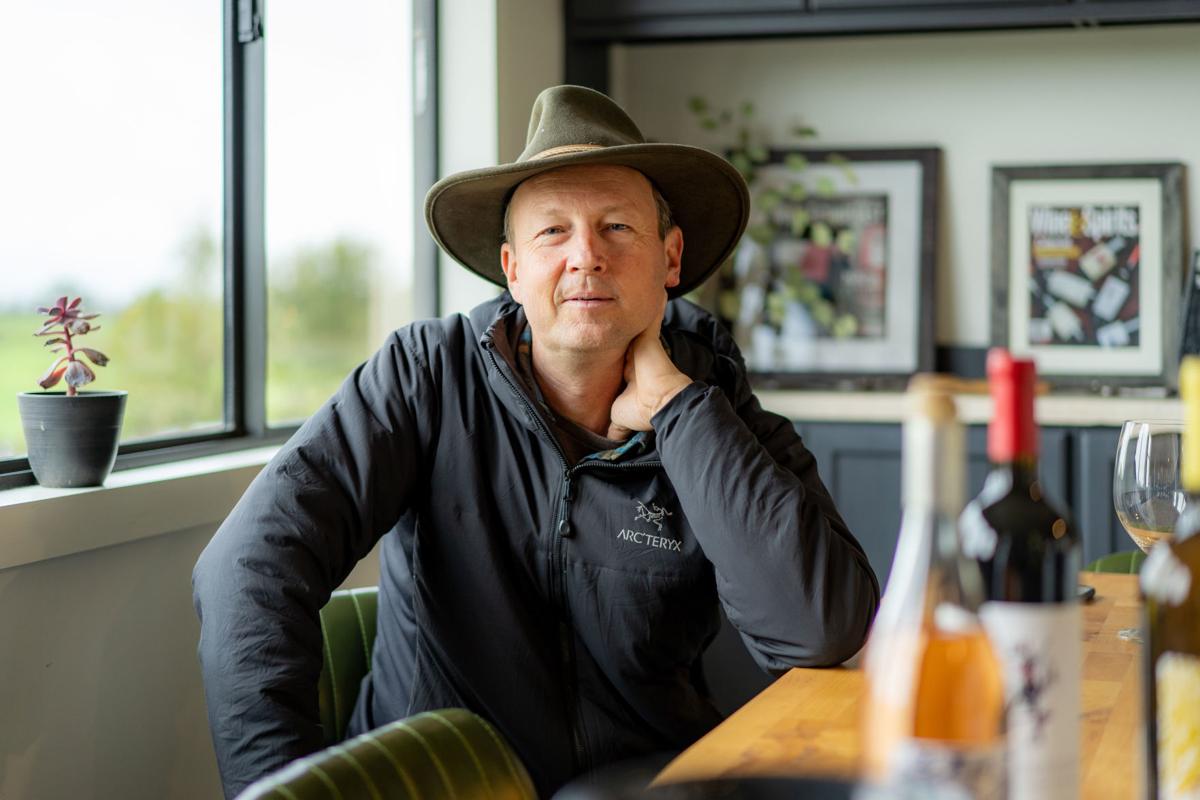 Steve Matthiasson at the Matthiasson Winery tasting room located on the outskirts of Napa in the Oak Knoll AVA.

But now, as continued drought conditions further exacerbate these problems in California, he says he is being called upon more and more frequently.

“We are always trying to conserve water in Napa because we have a limited aquifer and that is really important for the health of the rivers to get more flow,” he said, “[But] I have had a few more people reach out about water than normal.”

Matthiasson -- who is at the helm of Matthiasson Wines alongside his wife, Jill -- predicts yields are going to be “way off” this harvest season. To those in the industry, these drought conditions have been and will continue to be frightening.

“A lot of vineyards worry about the long-term health of the vineyard on top of the loss of crop this year, and there’s no guarantee we are going to get rain this winter ... It’s a scary time.”

A major suggestion that Matthiasson has for those with impacted crops is to, if financially and physically possible, replant their vineyard with more drought-tolerant rootstocks. Different varieties of grape have different levels of tolerance against salinity, saturated soils, disease, pests, and the like, so the chosen variety planted affects much more than the flavor, but also the viability of the vine.

“You can drive around and probably see a lot of vineyards getting replanted right now, and that’s because of the market, but it's an opportunity for people,” said Matthiasson. “The nurseries are selling way more drought-resistant rootstocks than they normally do, and that can be a big change because for the life of those vineyards, they are going to use less water.”

On his own vineyard, Matthiasson has been planting rootstocks that are more drought tolerant than typically warranted for the soil type. These stronger rootstocks require less water, and thus will require less irrigation than previously necessary.

“There are some other things you can do with row orientation and soil prep so that the vineyard uses less water,” he said, “But vineyards that were planted 15-25 years ago hadn’t gone through these droughts so lower, bigger rootstocks were more in vogue.”

So while you can change the irrigation strategy, train roots further into the soil, compost, plant cover crop or implement shade cloths to save water in a vineyard, it all really boils down to how readily your plants can access the Goldilockian amount of water, which in itself boils down to the physiology of the vines.

Dr. Megan Bartlett of UC-Davis's Viticulture and Enology Department focuses much of her research on what makes a rootstock drought tolerant, as it is very difficult to tell in advance whether a rootstock will possess those traits.

“Which isn’t a problem when you have enough rootstocks that you can take out to a field and you can compare them in a vineyard over a couple years, but if you are breeding new rootstocks to be more drought tolerant, then you are dealing with hundreds of genotypes,” she said. “You need something that you can sort of screen through very quickly, and find out which ones will be the most promising … That is part of what we work on, is trying to identify those traits so you can choose which ones to focus on in the field.”

Bartlett says that her current research has a few promising characteristics, with follow-up work focusing on root patterns and the way the plant exchanges gas when experiencing water stress.

“Some of the things that have come up as really important are just patterns in root growth, where you can see this greater root proliferation in wetter areas of the soil, and that’s a really good sign for a drought-tolerant rootstock,” she said. “We’ve also been investigating some traits closely related to gas exchange under water stress which seems to be related to the structural integrity of the root.”

Bartlett has all sorts of suggestions for the vintners that come asking her and her colleagues for advice, ranging from re-planting and re-orienting your vineyard’s rows to adjusting the amount of canopy growing from your vines. She explained how things that seem as simple as row orientation dramatically affect the outcome of grapes, especially while undergoing drought.

“When you are oriented to get as much sunlight during the day, in cooler climates that is exactly what you want to get as much light and heat on the fruit to ripen it,” she said. “But in warmer areas like California, especially as you get further south and further into the valley, you can end up having too much heat on the fruit, which reduces quality and yield, so one of the things you can do is change that row orientation so you are getting less sun on the fruit in the afternoon, and you are getting more of your sun in the morning.”

Similarly, the canopy is important to shield the fruit from being baked in the sun, but also requires more water to keep that part of the plant alive. Bartlett said there are a few ways to manipulate canopy growth, but warns that you have to find a careful balance to avoid scorching or drying out your plant.

“You can change the amount of canopy and the amount of fruit that you are trying to ripen in that particular year, so you can choose to reduce your yields and that will allow you to do a more aggressive shoot thinning, and then you have less canopy area that is out there losing water,” she said. “[But] you can’t totally denude the canopy, because that will backfire on you.”

This same balance is necessary when considering re-planting, too, as the variability of conditions can negatively affect a drought-tolerant rootstock when the site gets more water than usual.

“The rootstocks that are drought sensitive are also supposed to bring down vigor on really wet sites or during really wet years, so one of the issues you can run into if you run into a really drought tolerant rootstock is that in a year where you don’t have drought, you are going to run into really large vines,” she said. “You have to think about your site and how variable the conditions are.”

While a one-size-fits-all drought solution would be great, there are too many factors across terroir, year, climate and water access to warrant such a thing. Replanting a vineyard is expensive, not even considering loss of crop, a delay in harvest, and the risk of abandoning your vines. (And that is if the re-plant goes successfully.)

With a little penny-pinching, though, Matthiasson thinks more vintners would re-plant their vineyards with these principles in mind if they were given the resources to do so.

“In Europe, there’s government assistance for replanting vineyards,” said Matthiasson, “And I mean this is big picture, and probably at the federal level, but having some help replanting to more drought-tolerant rootstocks would be great … We don’t tend to get agricultural subsidies that other crops get just because our industry is concentrated mostly in one state.”

While the state does offer incentives through the Healthy Soils Program for compost and cover crops -- which do help soils retain more water and thus cuts down on necessary irrigation -- there are not currently any programs oriented toward increasing drought resiliency by replanting.

“There’s some funding buckets, but we don't have anything for more drought resilient vineyards,” said Matthiasson. He also thinks that the government should provide some sort of assistance for applying to grants, as the process is often time-consuming and confusing.

“I think that people that are not in agriculture sometimes don’t understand why farmers are still doing practices that might seem antiquated or reactionary,” he said, “But it’s not easy, and that’s why incentives would be nice.”

Bartlett said there is also a larger barrier to resilient vineyards beyond the brute economic cost, that being the case of whether there is even enough water to go around at all.

“You can be as efficient as possible, and that helps and it reduces everyone’s need for water because there is more water to go around, but in some cases, there is a limit to what you can do,” she said. “Some places have wells and have the ability to reach more groundwater, but other places are smaller and they can’t really do that, they don’t have holding ponds … All of these strategies can help, but there really is a minimum amount of water needed to produce a crop.”

Napa Valley harvest report: A busy week in the vineyards

Napa Valley growers spent the last week hauling high-quality, low-yield white varietals to their crush pads, and some are already bringing in reds.

Aerial photo of Matthiassons’ home vineyard in the Oak Knoll AVA on the south-west edge of the city of Napa.

Tod Mostero of Dominus explains how they manage the estate as a dry farmed vineyard, meaning they do not irrigate their vines.

Steve Matthiasson at the Matthiasson Winery tasting room located on the outskirts of Napa in the Oak Knoll AVA.