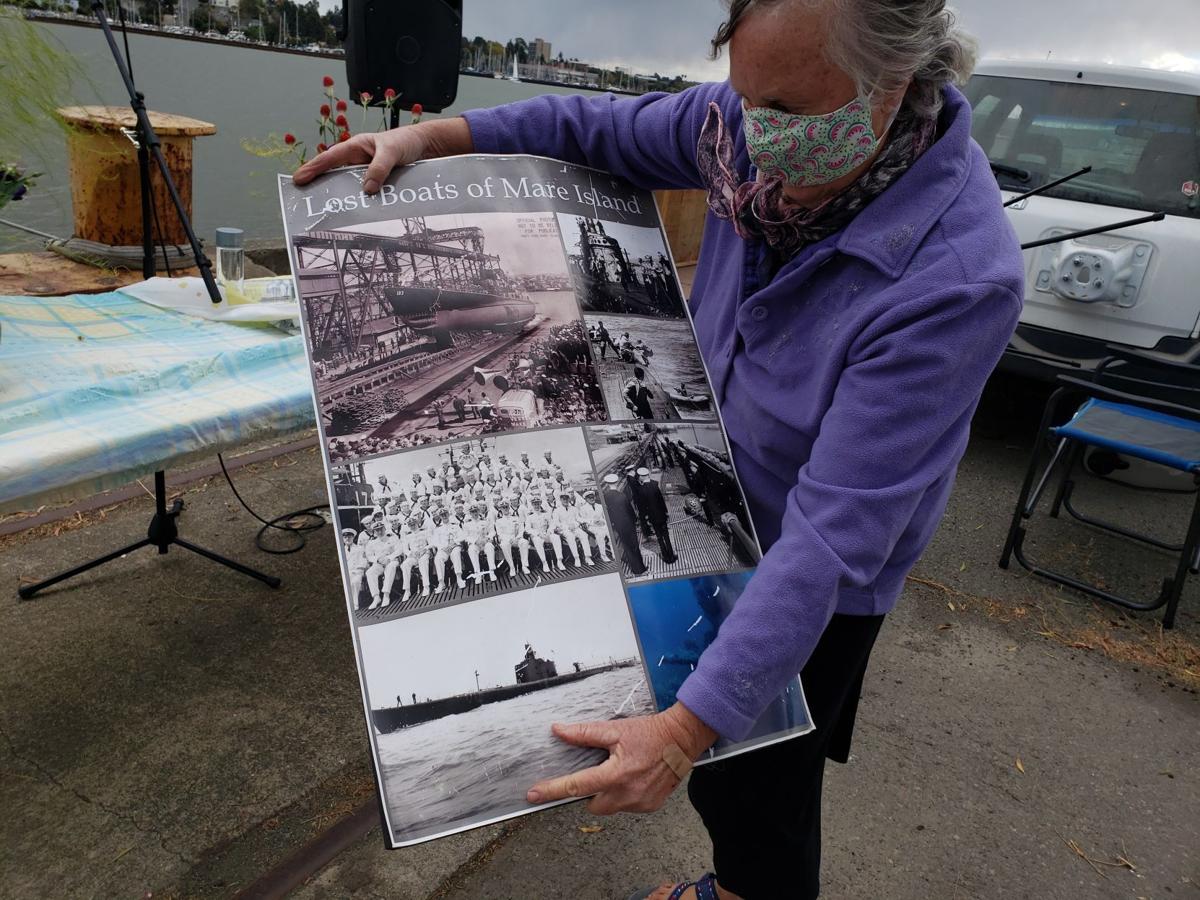 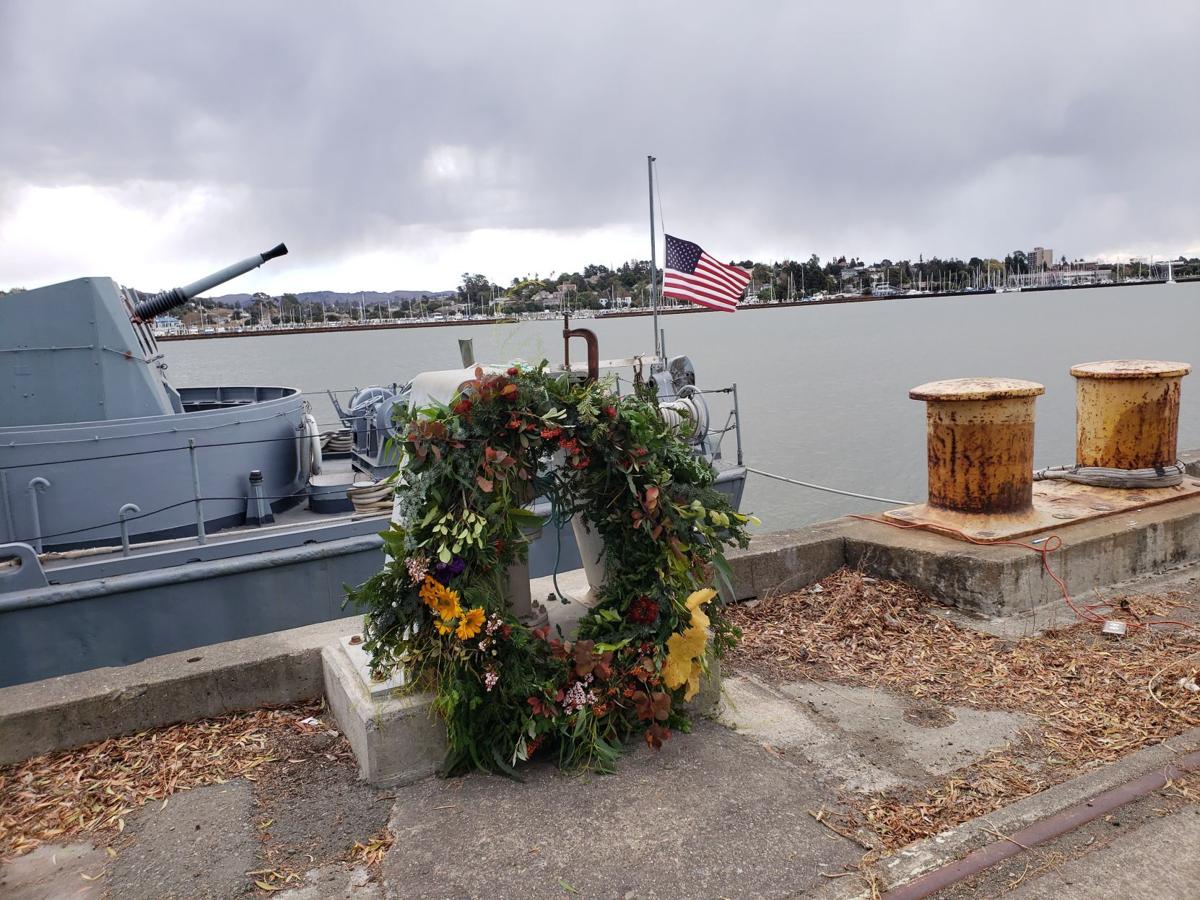 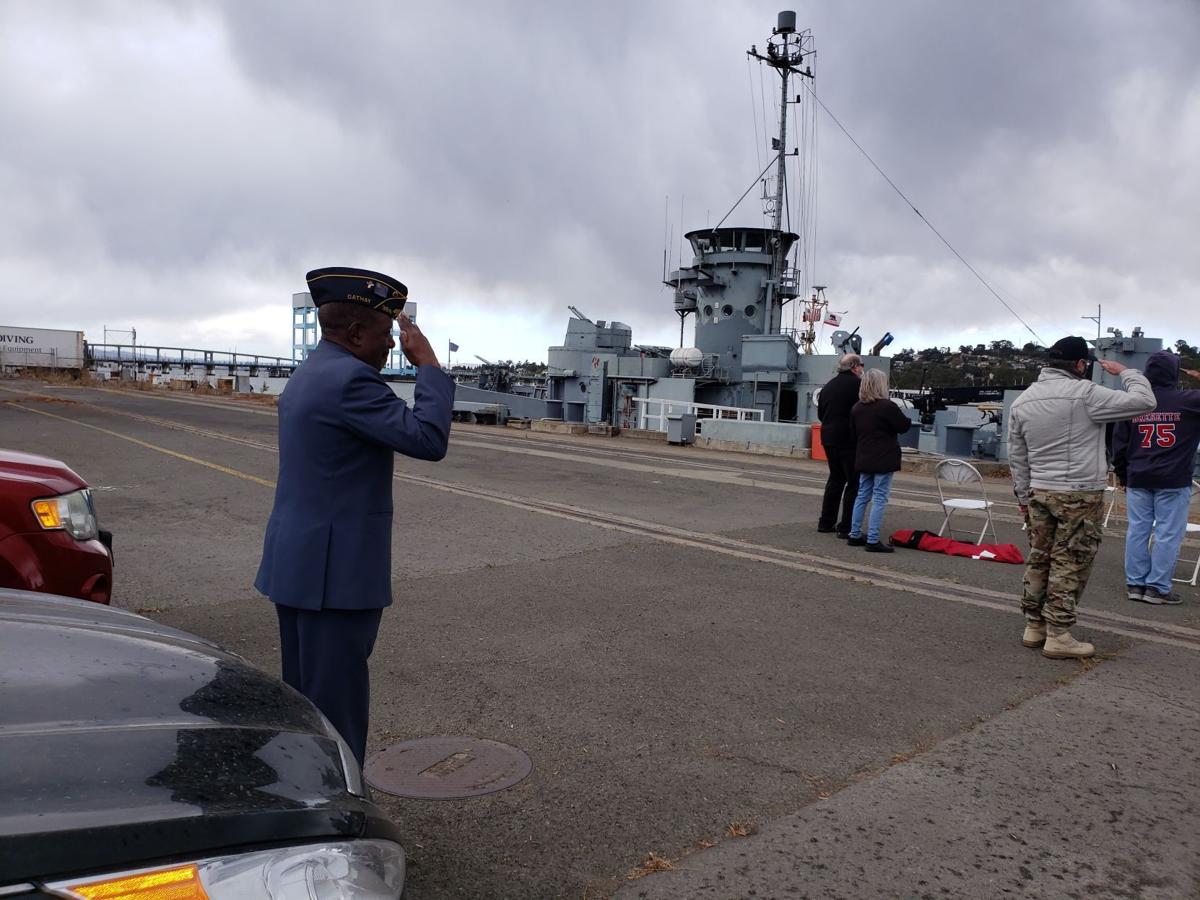 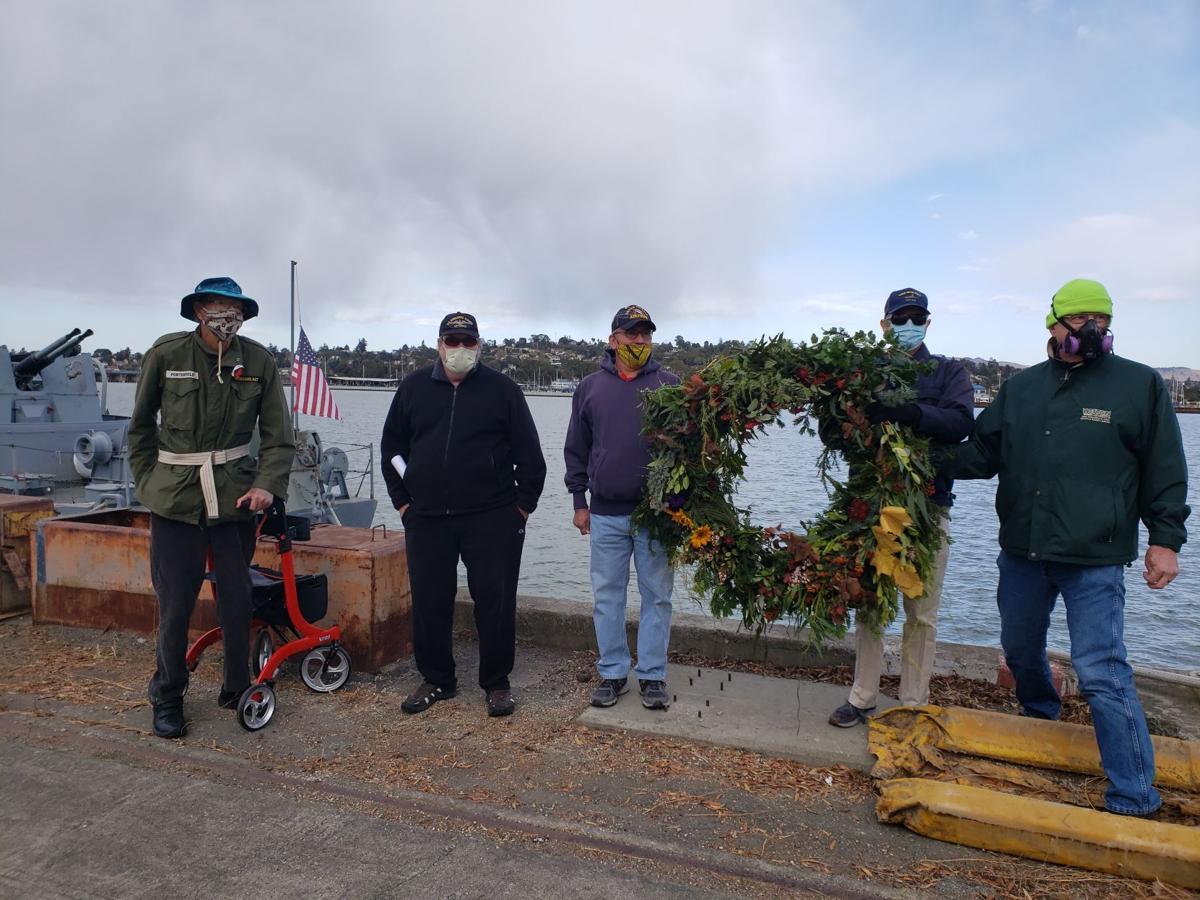 A wreath honoring the sailors who died aboard "lost" submarines made at Mare Island Naval Shipyard during World War II is about to be thrown into Mare Island Strait. 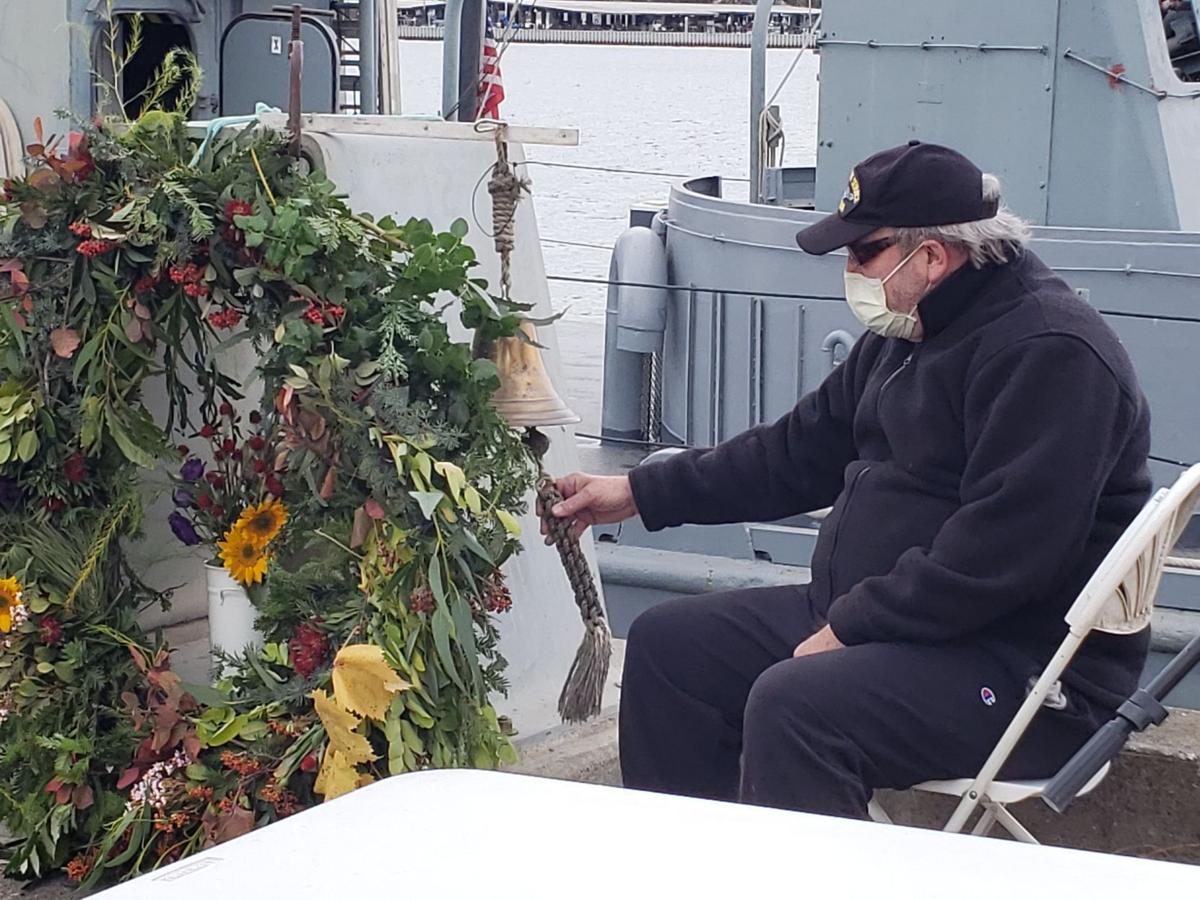 A man enjoys a moment of silence before a wreath honoring sailors lost on Mare Island-build submarines is laid on the waters of Mare Island Strait Sunday.

The event memorializing those lost at sea on Mare Island Naval Shipyard-built submarines. The event launched with a heavy drizzle and wind gusts that toppled flowerpots and sent organizers chasing after flyers sent flying.

Paul Smith and his partner Debbie Colmar came to the event from Calistoga and stayed till the end. He’s always “had a thing for submarines,” ever since serving on one in Vietnam,” said the 70-year-old Smith.

Sunday’s event was founded and organized by Myrna Hayes of the Mare Island Heritage Trust, and Larry Maggini, a former submarine combat systems engineer at Mare Island Naval Shipyard and author of two books on the subject – “USS Wahoo – In Memorium” and “On Eternal Patrol – The Lost Boats of Mare Island.” The shipyard closed in 1996.

The first Lost Boats memorial was held in 2007, after the remains of the Wahoo were located. The Wahoo was discovered by a Russian oil consortium in 2005 in La Perouse Strait.

Classified under international law as war graves, Wahoo and the other lost boats are considered by naval tradition to be fitting resting places for their crews.

“I heard about the Wahoo being found and Myrna and I got to talking, and she dreamed up this event,” Maggini said. “The purpose is to honor the seven boats built on Mare Island and their crews that were lost during World War II.”

The first event, held in 2007, honored only the Wahoo and her crew. Part of Sunday’s ceremony included the tolling of a bell for each of the seven boats whose final resting places remain mostly unknown: the USS Wahoo, the USS Pompano, the USS Swordfish, USS Gudgeon, USS Trigger, USS Tullibee and USS Tang.

The memorial service honored the more than 550 crewmen on the lost boats of Mare Island.

Held at the WWII Landing Craft Support Gunboat 102, the service included music, an abbreviated history and the laying of a memorial wreath in the Napa River/Mare Island Strait. The wreath, made by hand mostly out of materials found in and around Mare Island, was placed into the water at the end of the ceremony, by several veterans.

“It goes into the river, and wherever it goes, it honors the boats and their crews,” Hayes said. “The first year, I made seven wreathes – one for each boat.”

Songs played included “Wayfaring Stranger,” “The Navy Hymn” and “Taps” at the laying of the wreath.

“Over 665 U.S. submarines have been commissioned since 1900,” according to material passed out during Sunday’s memorial. “A total of 65 have been lost; 41 to enemy action and the remaining 24 to ‘operational causes (like grounding, flooding, collisions, fires, and equipment failure).” Along with them were lost a total of 3,882 officers, enlisted men and civilian yard workers.

The names of the lost boats are honored names, Maggini said. “Not just because of the courage and the spirit and the sacrifice of the men who sailed aboard them, but, also because of the sweat and the skill and the steel of Mare Island that are forever linked to them. The records in the archives may fade, but their memory will live as long as the bell still tolls.”

Photos: A bit of Disneyland rolls in Napa

A Napa family built their own backyard roller coaster, including a ferocious Yeti. Check it out.

Weekly case totals haven't been this high since mid-August, the county reported.

An eviction crisis, stymied only by philanthropy and a temporary eviction ban, simmers in Napa County

Twin economic crises - the pandemic and the wildfires - threaten the housing security of a substantial number of renters in Napa County. More than a third have asked for help.

World War II airman Paul Galleron of Rutherford was forced to land in Russia after his plane sustained damage during a bombing mission against the Japanese.

A wreath honoring the sailors who died aboard "lost" submarines made at Mare Island Naval Shipyard during World War II is about to be thrown into Mare Island Strait.

A man enjoys a moment of silence before a wreath honoring sailors lost on Mare Island-build submarines is laid on the waters of Mare Island Strait Sunday.