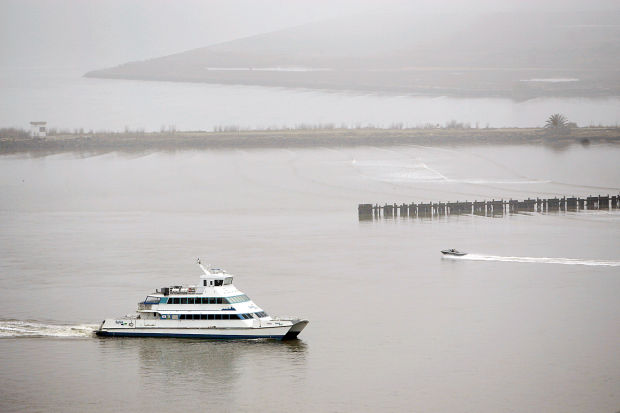 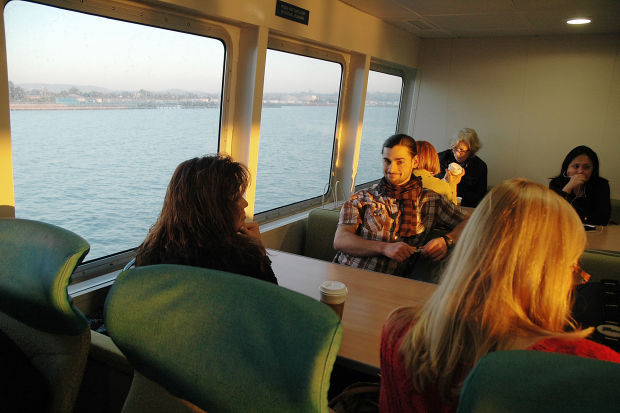 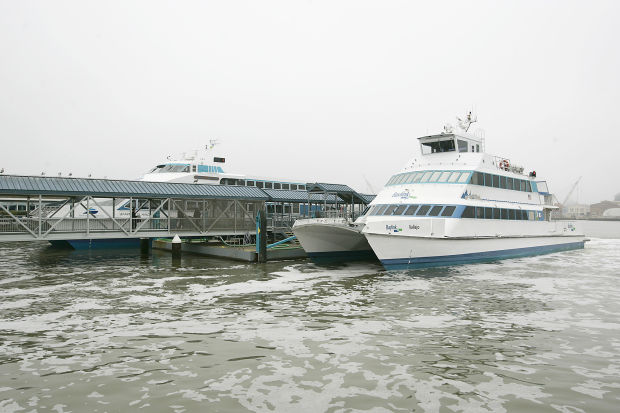 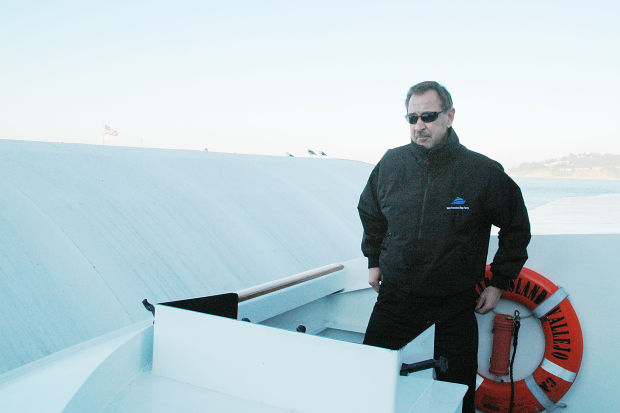 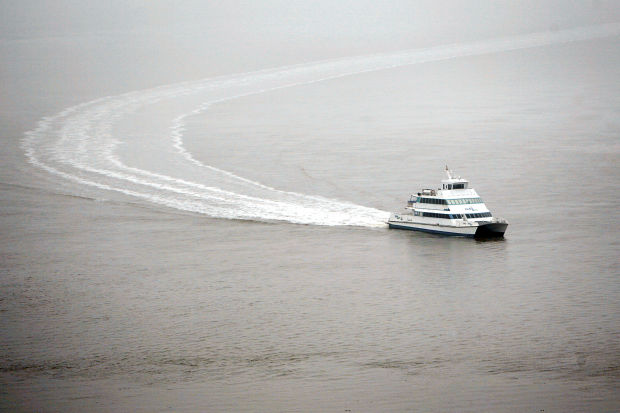 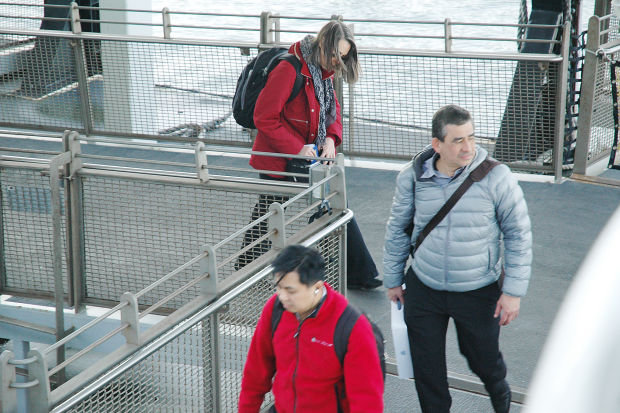 VALLEJO — Pulling out of Vallejo on a recent Thursday afternoon, ferry Capt. Chuck Elles headed into San Pablo Bay bound for San Francisco on the MV Mare Island, a high-speed catamaran. He would pick up commuters for the evening ride home.

“I know every inch of this place,” said Elles, a longtime Napa resident who has been sailing the route since 1992. He would make two round trips to San Francisco by the end of the day.

Within minutes of leaving the Mare Island Channel, the ferry gained speed as it glided through the bluish waters of San Pablo Bay, following ferry lanes established by the U.S. Coast Guard.

Using his right hand, Elles steered the ferry using a baseball-size knob while keeping an eye on the radar screens. The Mare Island, which was completely refurbished a year ago in Washington state, has a new radar system sensitive enough to pick up the wake of boats and a flock of pelicans.

After traveling under the Richmond-San Rafael Bridge, the Mare Island passed in the shadow of Angel Island before sailing by Alcatraz and approaching the San Francisco Ferry Building, 50 minutes after leaving Vallejo. As the boat docked, a line of waiting commuters was visible from a distance.

On weekdays, the ferry system’s four boats transport on average about 1,990 riders daily from Vallejo to the city, according to the Water Emergency Transportation Authority, the agency that has owned the boats and the route since July. On weekends and holidays, 1,315 riders ride the four boats that Blue and Gold Fleet operates under contract with WETA. Buses also travel daily to and from San Francisco at scheduled times and whenever a boat breaks down.

Ridership suffered during the recession after the city of Vallejo imposed a sharp fare increase to pay for higher diesel costs. The ferry transported 668,770 passengers in 2012 — about 25 percent fewer riders than in 2007, officials said.

This year, WETA, which runs the ferry on $14 million a year, wants to boost ridership by 1.5 percent. Ridership has increased by about 7 percent over the past six months, compared with a year earlier, said WETA spokesman Ernest Sanchez. Last year, ticket sales covered 46 percent of the route’s operation costs, according to WETA. The rest comes from bridge tolls from the Bay Area, the agency said.

Exactly how many Napans ride the ferry now is unknown. But a survey taken in 2010 estimated about 13 percent of all riders were from Napa, according to Napa County.

Taking the ferry is the best way to get to San Francisco, said passengers who were interviewed.

“It’s a beautiful way to get to work,” said Carolyn Phelps of Napa, who has commuted to San Francisco four days a week for the past year and a half. “The weather, the bay is different every day,” she said. “I never get tired of the water and the play on the water. I always wonder why people sleep the whole time. It’s a nice, beautiful view.”

“It’s a very civilized way to arrive in the city. I look forward to it,” Phelps said.

Also riding on the Mare Island was Lola Nickens, the associate director of Community Resources for Children in Napa, who was coming home after attending a conference. “It’s so much easier than driving,” she said.

Jim Fisher, a federal employee who commutes to San Francisco from Glen Cove, has been riding the ferry to work for the past 11 years.

“Unlike the BART, we have bathrooms,” he said. “It’s nonstop. We have comfortable seats ... a snack and an alcohol bar. And it’s relaxing. It’s always on time.”

Until now, parking has been free. But the city of Vallejo, which last year completed the construction of a new parking garage, plans to charge $5 per day or $20 per month for parking beginning in March. WETA hopes this will not lead to a drop in ridership, said spokesman Ernest Sanchez. The city of Vallejo could not be reached for comment.

In a staff report in October, the city said the fees were necessary to cover the cost of maintaining the parking, to pay private security to patrol the parking areas, and to pay staff.

The Napa County Transportation and Planning Agency’s VINE buses stop at the Ferry Building in Vallejo, allowing someone to board a bus in Calistoga and stay on public transit all the way to San Francisco.

According to NCTPA, 2,900 people ride Route 11 between the ferry terminal and Napa each month, and up to 500 people ride the Express Route 29 bus, which stops at the Vallejo ferry before continuing on to BART in the East Bay.

Ridership can vary by time of year or day of the week, said Roberts, manager of public transit for the agency.

“To the extent that the city of Vallejo charges for parking at the ferry terminal, we are glad that the VINE routes 29 and 11 are available and able to provide an even greater value for our riders,” Roberts said in an email.

Other WETA projects include the future construction of a new $25 million ferry maintenance facility on Mare Island with a mixture of state and federal grants, about half a mile upstream from the current maintenance facility where boats are fueled and cleaned. Construction could start this summer and take two years, according to WETA.

The current facility, on land leased from Lennar Mare Island, was designed to be temporary.

The new facility’s features include permanent offices and big diesel fuel tanks, which will allow the purchase of large amounts of diesel at better prices, according to WETA.

A ticket to ride