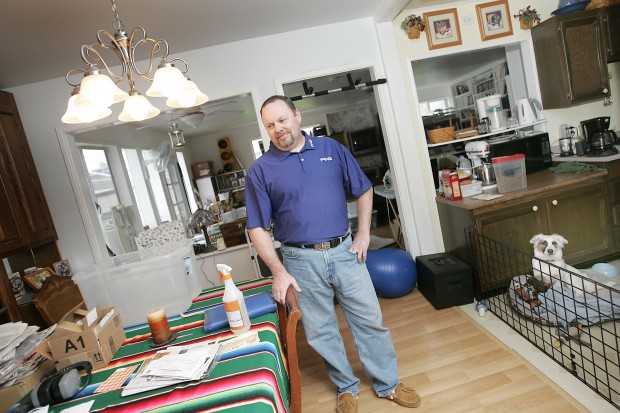 TUESDAY - MARCH 27, 2012 - NAPA, CA - Art Morris and his family had owned their home for 19 years. The native Napan also owned a golf store in the Cordelia area. In 2007 he took out a home equity loan to expand the business. Within months the economy soured and the United States Air Force retiree had to close the business. Morris and his family now face a short sale on their Napa home and are searching for somewhere to live. He is also looking for work. J.L. Sousa/Register 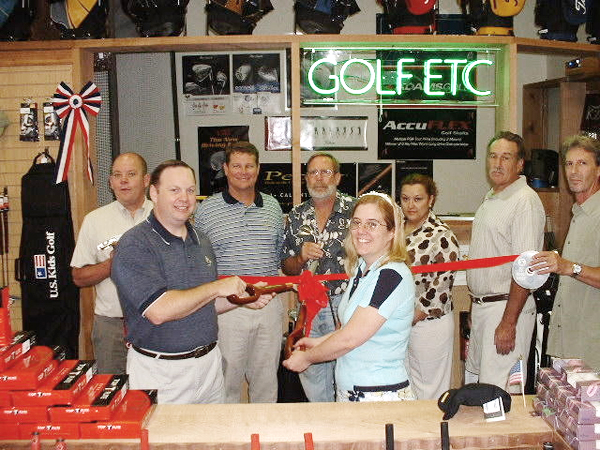 Art Morris and his wife Teressa, center, host a ribbon-cutting ceremony at their golf store in Cordelia in 2005. Submitted photo

Back in 2005, Art Morris and his wife Teressa were living a good life. The Napa natives had opened a golf store franchise in Cordelia that was on track to gross more than a million dollars a year. The two lived in a house they owned in Napa, and Teressa Morris home-schooled their two children.

Seven years later, it’s a very different story for the Morris family. The couple has closed their business, filed for bankruptcy and lost their home to foreclosure. They are struggling with unemployment and at risk of becoming homeless.

“I grew up middle-class and never really wanting for anything,” Art Morris said. “I never, ever thought we’d be in this position.”

A retired Air Force veteran, Morris described how he and his wife worked 10- and 12-hour days at their golf shop, Golf Etc. At the end of their first full year in business, the shop was named “Rookie Franchise of the Year.”

A photo taken at the time shows the couple posing proudly at a ribbon cutting in their store. Golf bags and other equipment are stacked around them.

Things were going so well, they took out a home equity loan to expand the business and add inventory, he said. While that loan doubled their monthly mortgage to $3,000, it was doable, they said.

“We were paying our half and the shop was paying its half,” he said.

With their early success, Morris was able to draw a salary of $72,000 a year. “That was more than I had ever made in my life,” he said.

And then the economy tanked. Regular customers like real estate agents and mortgage brokers from Solano County and surrounding areas stopped buying. “It took a huge chunk of our business,” he said. “All of a sudden, we became a luxury item.”

The couple had to fire a manager for embezzlement. After thieves broke into their shop, insurance didn’t cover the stolen items because the couple had missed a premium payment. In early 2009, they projected gross sales of just $400,000.

Struggling to cover payroll and loan payments, the couple was forced to close the store in late May 2009.

“We couldn’t pull it off,” Morris said.

Facing debts from the business and unemployment, the couple filed for bankruptcy. Because they were unable to pay their mortgage for more than a year, their bank started foreclosure proceedings on their Napa home.

Morris collected unemployment until his benefits ran out. Finding work has been a struggle, he said. A former manager in both business and the Air Force, it seems like “I’m overqualified or underqualified for everything,” he said. In addition, “I don’t have my degree … and college grads are a dime a dozen now.”

Today, his wife works part-time at her own bookkeeping business, making about $1,800 per month, but “it doesn’t even come close to paying the bills,” Teressa Morris said.

With their home about to be sold in a “short sale,” with the housing selling for less than its worth, the couple has just days left to find a new place to live.

“It’s very scary because we don’t know where we’re going,” Teressa Morris said last week. “We have friends we can move in with temporarily, but that will be a tremendous imposition. I don’t want to do that if we don’t have to.”

On Valentine’s Day, they received a Section 8 housing voucher through the Napa Housing Authority. With the voucher, the federal government will help them pay rent.

“You have a certain amount of pride,” Art Morris said. “Then finally, you put your tail between your legs and seek out the resources.”

This family of four is allowed to rent a home for as much as $1,775 a month, but it’s been difficult to find a home for that price, Morris said. “There is very little out there,” he said. Some landlords don’t want to rent to a tenant using a Section 8 voucher.

Besides the housing voucher, they also resorted to using the Napa Food Bank.

“It took me a long time to even consider that,” Art Morris said. But, “Thank God they are there. Every loaf of bread, every can of soup — that all helps.”

Morris’ family lives in Oregon and helps the couple when they can, he said. He might have considered moving out of the state, where it’s less expensive to live, but because he is a disabled veteran his children are able to attend Napa Valley College for free and he doesn’t want to lose that benefit, he said.

Struggling to get by, the family now lives on much less.

“You learn how to be resourceful,” Art Morris said. “You don’t take things for granted anymore.”

For example, when their dishwasher and water heater failed in the same week, the family went without for a time.

“Take a month of cold showers and that wakes you up right away,” he said.

Teressa Morris started a blog about her family and their experiences. Having a creative outlet “has made a tremendous difference,” she said. Posting almost daily, “it keeps me distracted” from her other problems, she said. The site has hundreds of regular visitors, she said. “If I get one more follower, it can make my whole day.”

Even with all the turmoil of the past few years, Art Morris remains optimistic about the future. “This is temporary for us,” he said.

“So much worse has been happening to other people,” Morris said. “We will get on our feet again. But there are people that don’t. And it opened my eyes to that.”

Both Art and Teressa Morris said their faith has also been a comfort.

“There is a reason we are going through this,” Art Morris said. “It’s been rough, but at the same time, the experience has been a blessing.”

The couple’s relationship is stronger today, he said.

“We should have been divorced,” Morris said.  Instead, “We found out that we are true partners in life.”

The Morris family can be reached at:

Napa police and sheriff's deputies arrested a man early Wednesday who they say has been on a crime spree since April 11.

An Oakland man faces assault and robbery allegations after an attempted theft from a supermarket, according to Napa Police.

A Napa man was arrested on suspicion of felony drunken driving after a two-vehicle crash Saturday night, according to police.

Authorities link the seizure of six guns from a Napa home to a string of home and vehicle break-ins since April.

Napa Police: Officers fire plastic round at teen holding knife to own throat

Napa city workers, facing layoffs because of the coronavirus, fight to save their jobs.

TUESDAY - MARCH 27, 2012 - NAPA, CA - Art Morris and his family had owned their home for 19 years. The native Napan also owned a golf store in the Cordelia area. In 2007 he took out a home equity loan to expand the business. Within months the economy soured and the United States Air Force retiree had to close the business. Morris and his family now face a short sale on their Napa home and are searching for somewhere to live. He is also looking for work. J.L. Sousa/Register

Art Morris and his wife Teressa, center, host a ribbon-cutting ceremony at their golf store in Cordelia in 2005. Submitted photo