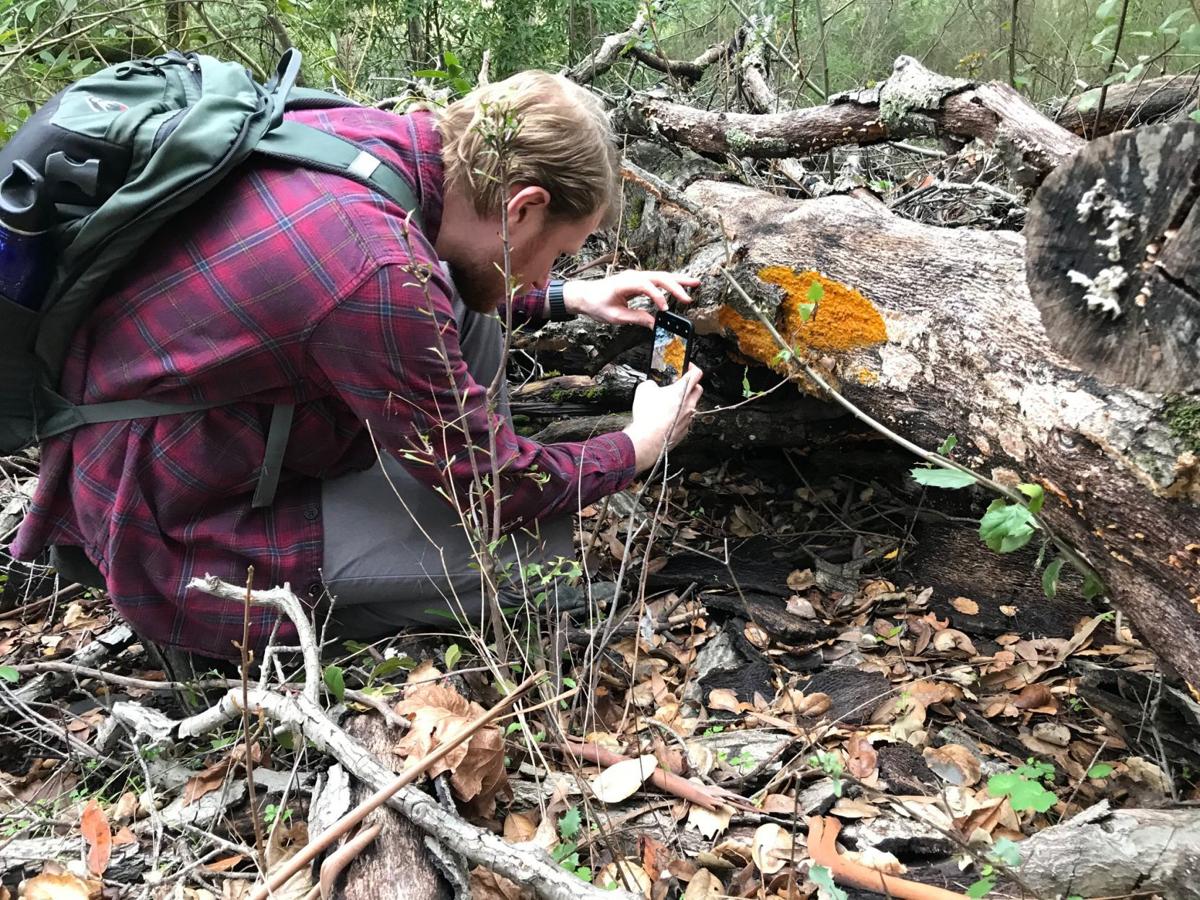 Gordon Walker photographs a "slime mold" at a Napa park. 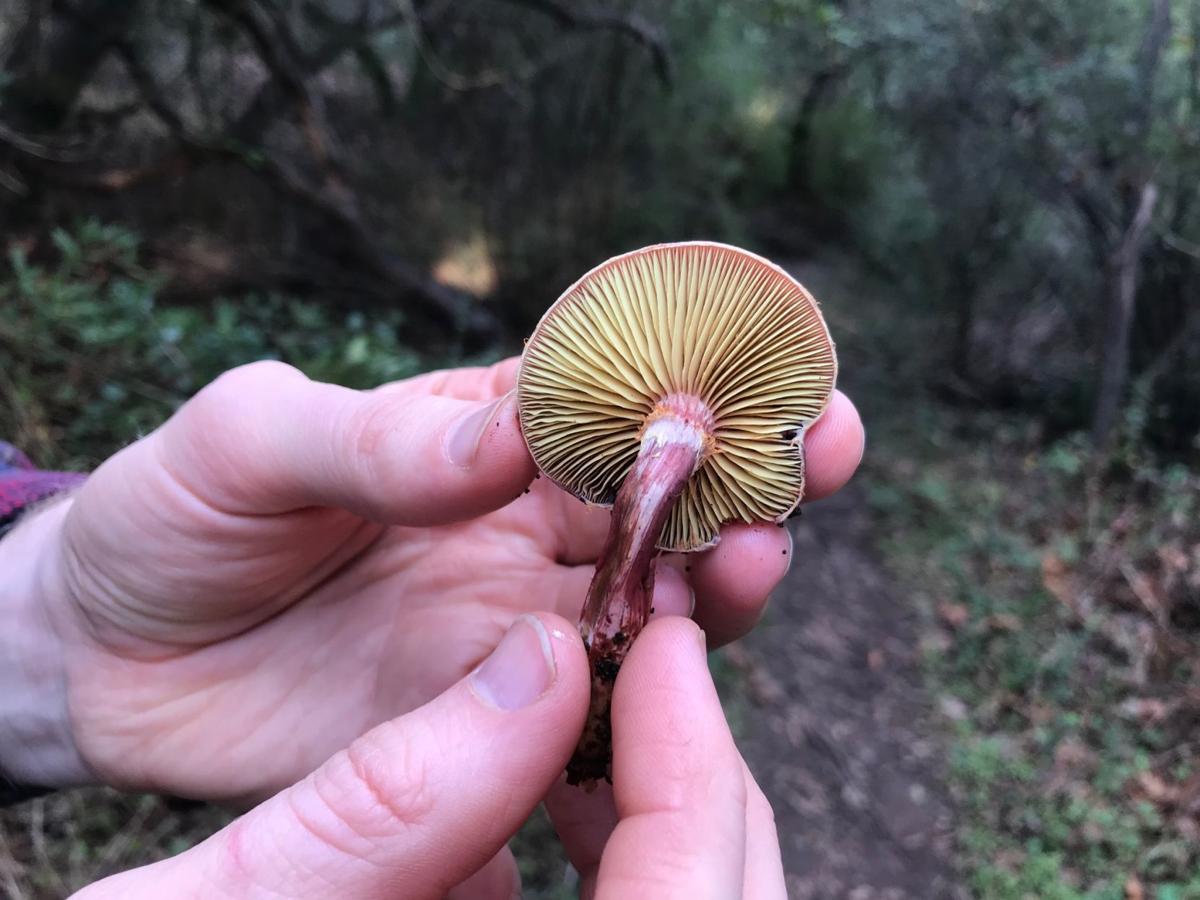 Gordon Walker, who is a biochemist, holds one species of mushroom found at a Napa park. 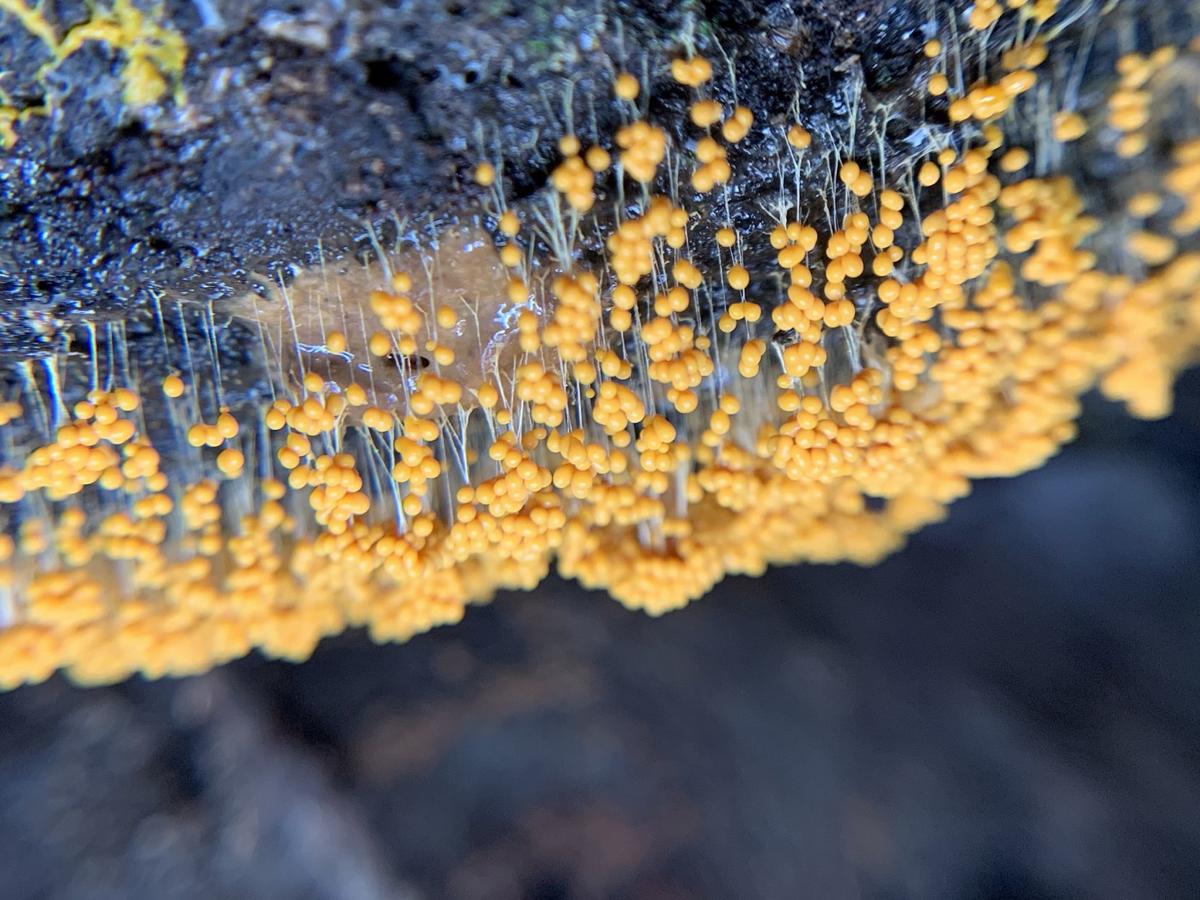 These aren't mushrooms but an amoeba like creature called sporangia. 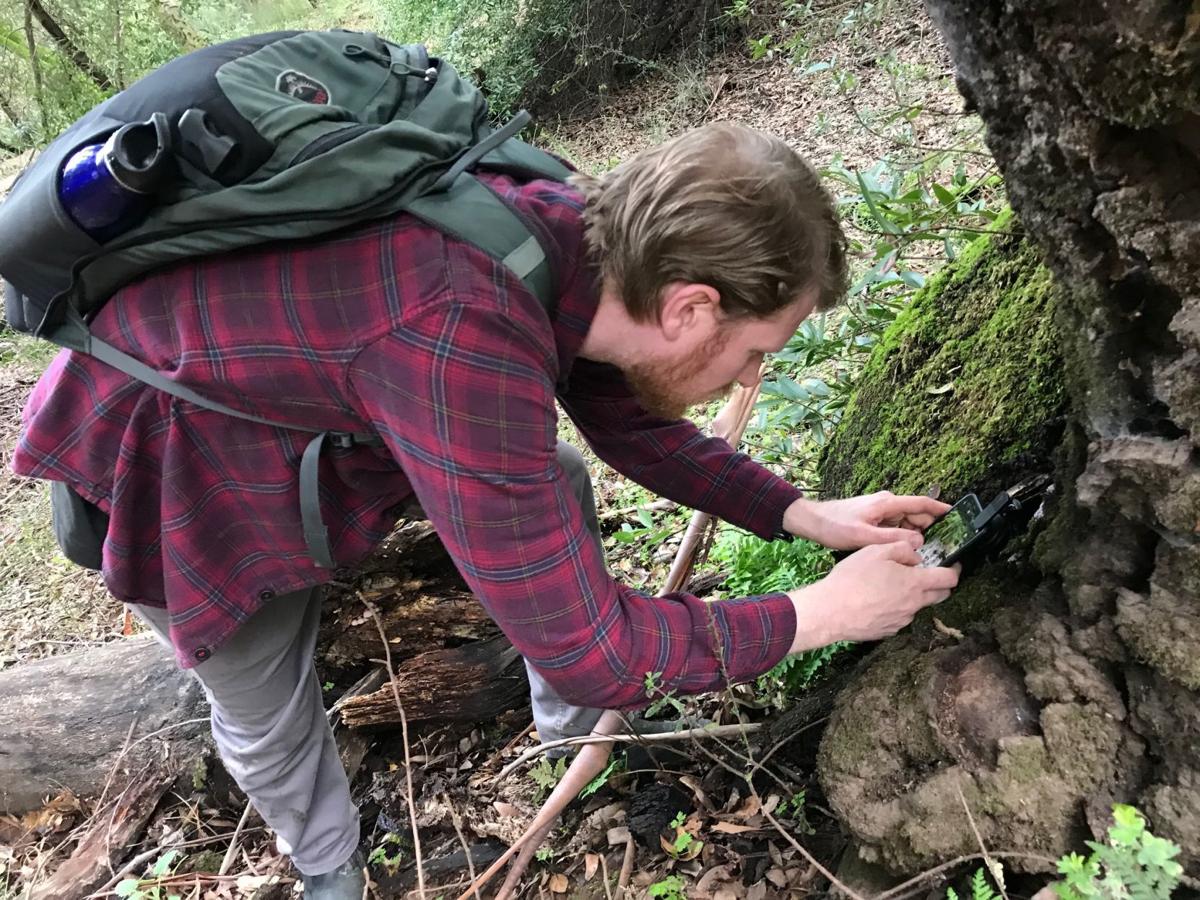 Gordon Walker of Napa is fascinated by mushrooms and enjoys searching for and photographing the fungi. This time of year, mushrooms are everywhere in Napa, said Walker. 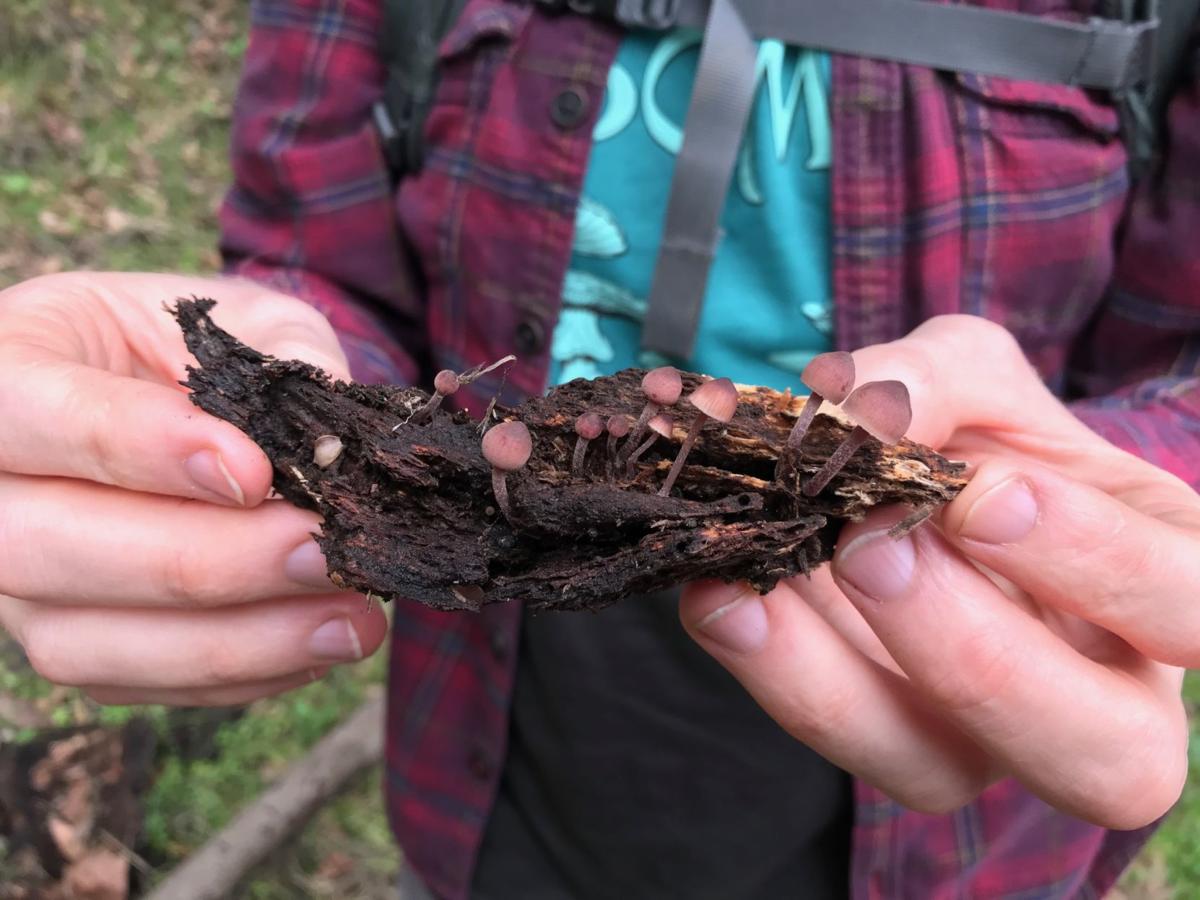 Gordon Walker holds one type of mushroom growing on a piece of wood at a Napa park. 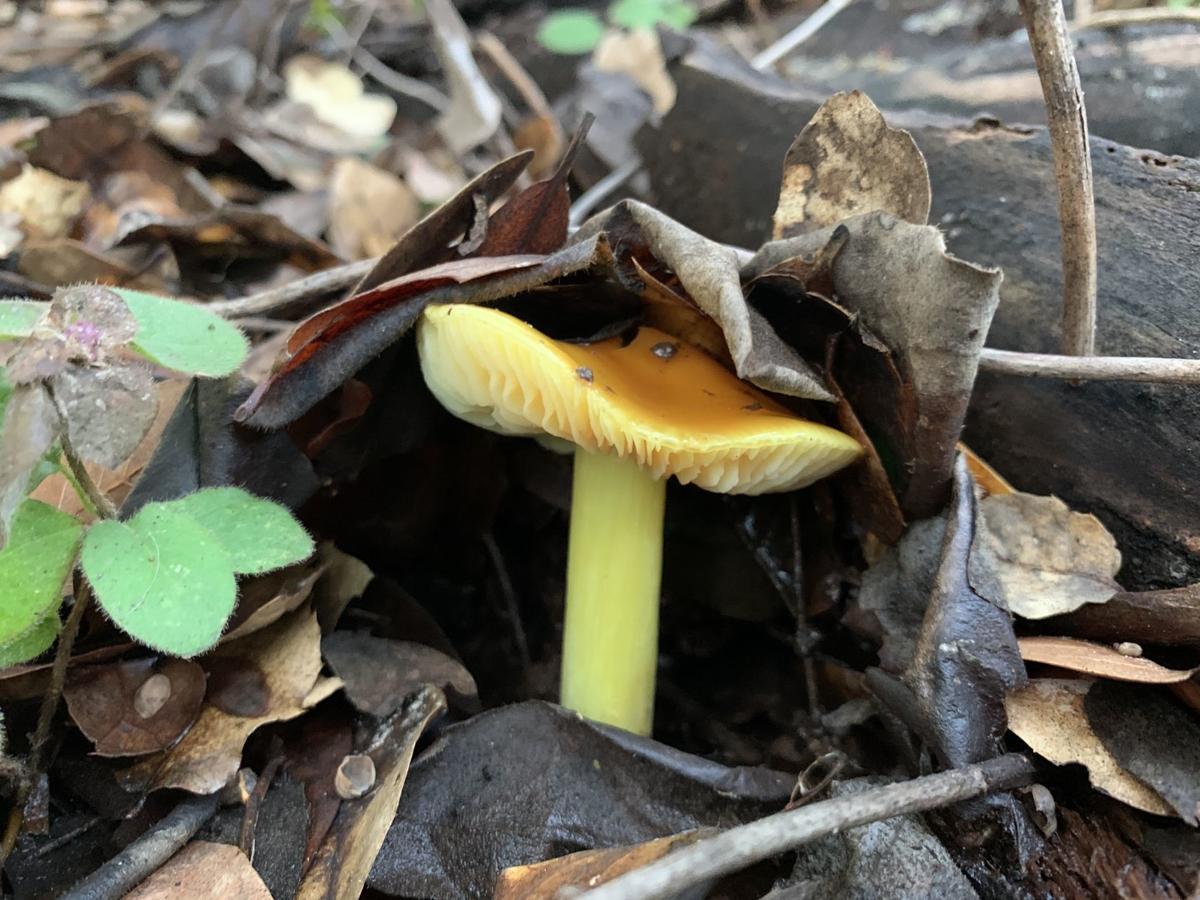 Hygrocybe flavescens mushroom as seen in a park in Napa. 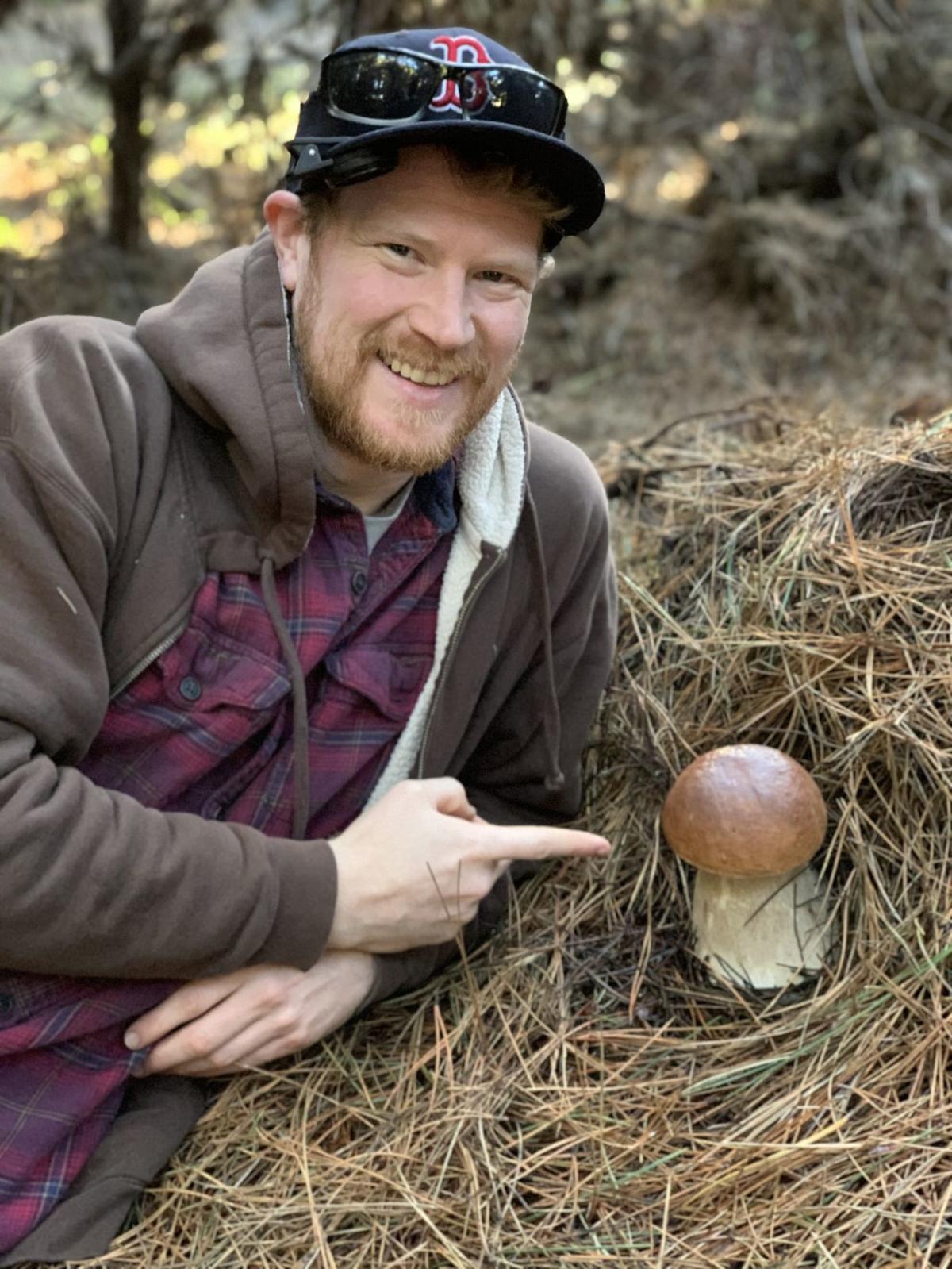 Gordon Walker poses with a mushroom he spotted during one of his many hikes.

Walker, a transplanted Napan by way of Massachusetts, is really into mushrooms. If he could, he’d hike for mushrooms every day, spending hours searching and identifying the many, many varieties of the fungi.

“I’d like to be the Bill Nye of mushrooms,” he said, referring to TV personality Bill Nye the Science Guy. “My goal is to educate people and get people excited about mushrooms.”

Walker said he especially loves the varied colors and textures of mushrooms. Mushroom spotting “can be super therapeutic. It’s kind of like an adult Easter egg hunt.”

“Mushrooms are endlessly fascinating because of the variety they can add to a hike or being outside,” said Walker.

“I love seeing the colors and textures — nature is its own greatest artist.”

Walker said he’s been interested in mushrooms since he was a kid. He reminisced about the time he found a huge Puffball mushroom as a child. Later he joined a mycological society – a group that studies and appreciates fungi. He and his father also grew sulphur shelf or chicken of the woods mushrooms in their own yard.

He’s not just an amateur. After moving to California, Walker attended grad school at UC Davis where he earned a Ph.D. in biochemistry, molecular biology and cellular and developmental biology.

His mushroom love really took off during a trip to New Zealand where the mushroom viewing was exceptional, recalled Walker. “I was curious about what I was finding.”

In 2018, the biochemist started taking photos and posting them on Instagram. Before long, Walker had 10,000 followers.

Walker does more than just post photos. He also researches the names of the mushrooms he’s found, and posts that information along with the images. He’s big on mushroom education. People are often misinformed about the fungi, said Walker. “I’m trying to give people some context” so they better understand mushrooms.

Walker said there’s a common question he gets when he tells people about his mushroom hobby: “Did you know those can kill you?”

“Yeah, I do,” he said. “I would never eat anything that I cannot 100 percent identify.”

Mushrooms can be a source of protein and vitamins, but at the same time, that doesn’t mean people should blindly take mushroom supplements or drink mushroom teas.

“It’s important to understand what you are putting in your body,” Walker said. Be sure of where mushrooms come from and how they are grown. And mushrooms can be powerful. “There are some supplements that can really screw you up,” he warned.

Walker also doesn’t want people to overrun areas known for harboring mushrooms. Some like to forage and collect specimens and eat or sell “high-value edible mushrooms” like chanterelle or porcini. Walker doesn’t hunt mushrooms to sell, he noted. “I’m just a hobbyist.”

By posting on social media and talking about mushrooms, “I’m trying to help people approach mushrooms with a mindful disposition,” said Walker.

How much time does the budding naturalist spend per week looking for and admiring mushrooms?

“As much time as I can,” the biochemist said. “I try to hike every day.”

When asked about his favorite spots for mushroom viewing, Walker had an easy answer: “Wherever I am.”

Mushroom season typically runs from about October to March, said Walker. Wooded areas are best, but mushrooms can be found everywhere, he pointed out.

On a recent walk at a Napa park, Walker pointed out a number of local mushroom varieties including blewit, coral tooth fungi and a “waxy cap” kind of mushroom.

He also pointed out other organisms such as a “slime mold” growing on one tree trunk. A slime mold looks like a fungus but is technically an amoeba-like creature.

Upon spotting a spread of a certain slime mold, Walker eagerly crouched down to take a close-up photo of it and was delighted to discover “sporangia” or spore-bearing fruiting bodies descending and getting ready to turn brown and disperse their spores. The sporangia look like tiny yellow globules suspended on white thread-like strings.

“You can spend an hour on one log,” he said.

Finding a spare hour can be tricky for this Napan. He currently works in technical sales for a bio processing equipment company. Walker also plans to return to UC Davis as a post-doctoral scholar.

Unfortunately, Davis is not an ideal place to look for mushrooms, Walker said — there are not enough wooded areas or cool, moist places.

“Fortunately I live in Napa with lots of oak chaparral woodlands!”

For more about mushrooms:

How We Eat 2020: Our cooks' tips for healthier eating in the new year

What "healthy" means to each of us is very different.

What's a sake cleanse? And why would you want to do one?

I recently proclaimed a huge confession: I don’t get sake. I had attended sake tastings, sat through sake classes, watched sake documentaries.…

10 cheeses to try before you die

The world of cheese is expansive and dazzling, but Janet Fletcher suggests you immediately place these selections on your "must try" list.

Gordon Walker photographs a "slime mold" at a Napa park.

Gordon Walker, who is a biochemist, holds one species of mushroom found at a Napa park.

These aren't mushrooms but an amoeba like creature called sporangia.

Gordon Walker of Napa is fascinated by mushrooms and enjoys searching for and photographing the fungi. This time of year, mushrooms are everywhere in Napa, said Walker.

Gordon Walker holds one type of mushroom growing on a piece of wood at a Napa park.

Hygrocybe flavescens mushroom as seen in a park in Napa.

Gordon Walker poses with a mushroom he spotted during one of his many hikes.