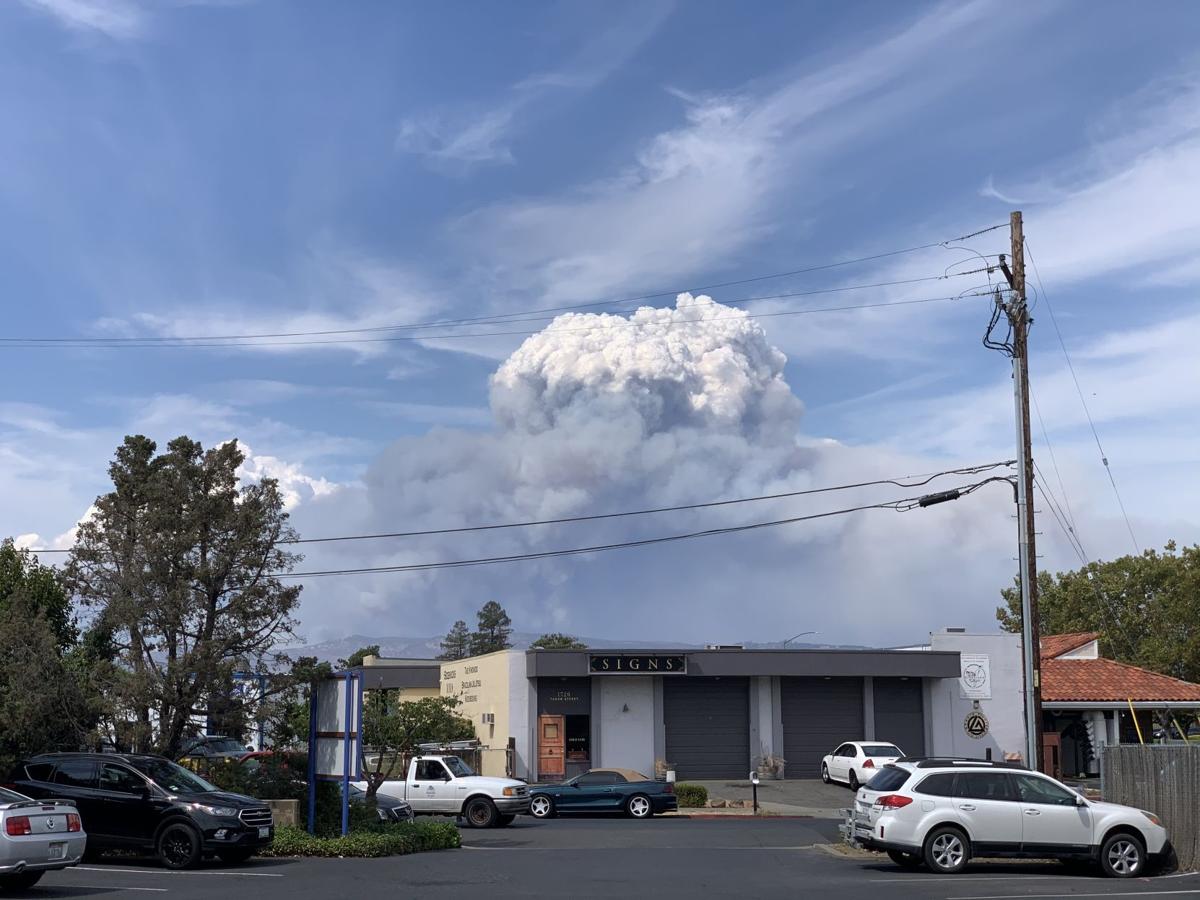 The Hennessey Fire threw giant plumes of white and gray smoke into the sky Tuesday afternoon, within view of city of Napa residents. This photo was taken from near Soscol Avenue in Napa. 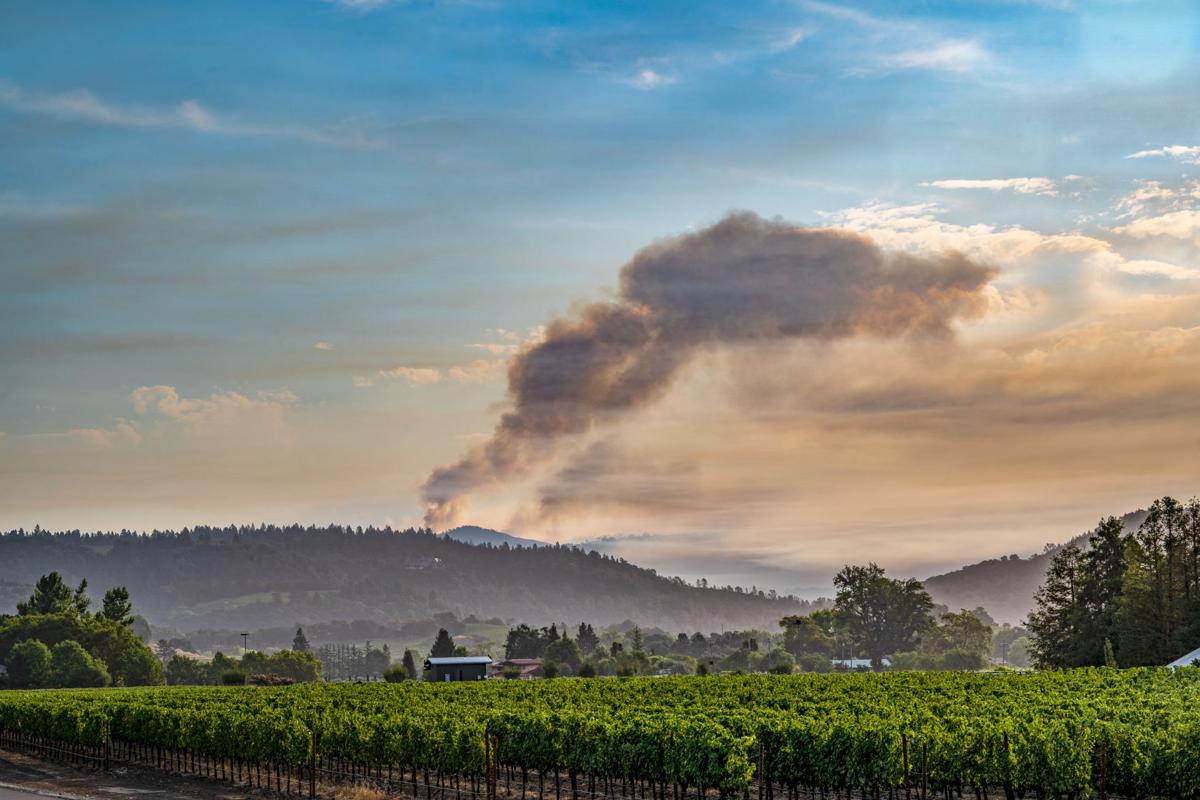 This was the view at 8 a.m. Tuesday from St. Helena of smoke from the Hennessey fire, which had burned 2,700 acres as of daybreak. 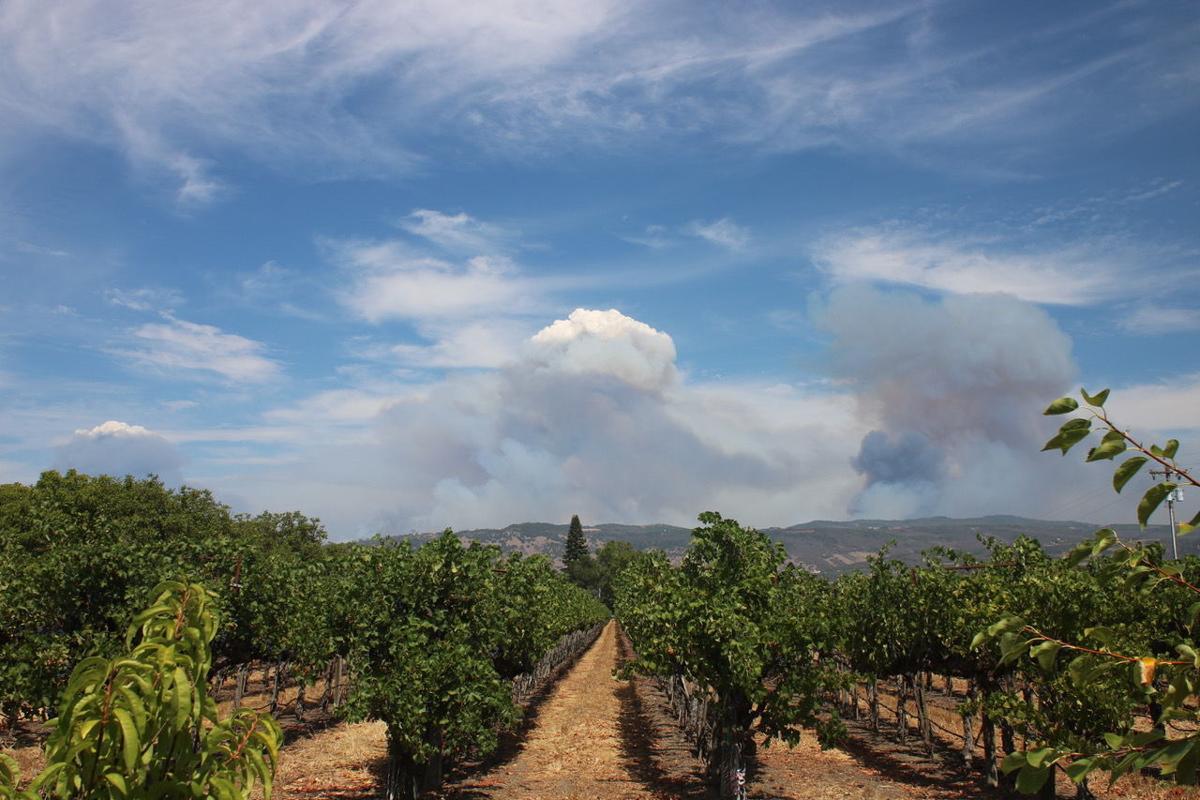 This photo captures the plumes from three fires burning in rural Napa County Tuesday afternoon. It was taken from Traina Vineyard south of Oakville Crossroad. 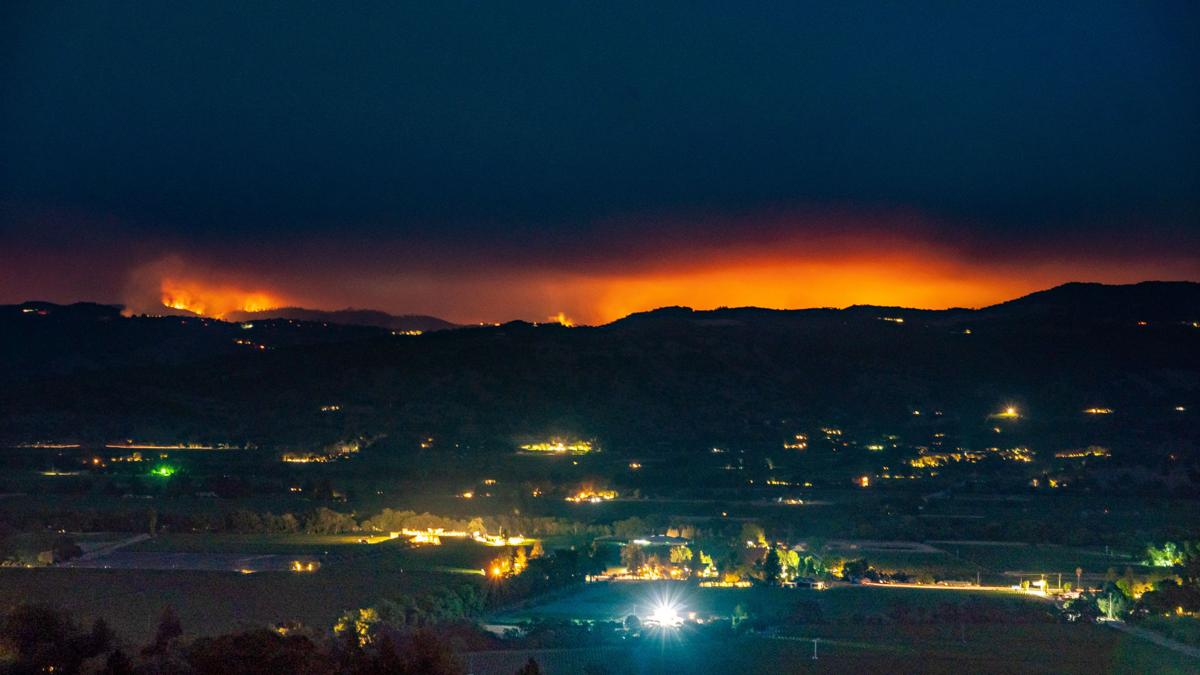 This is a shot of the glow from the wildfires looking east from the Napa Valley at 9 p.m. Monday. 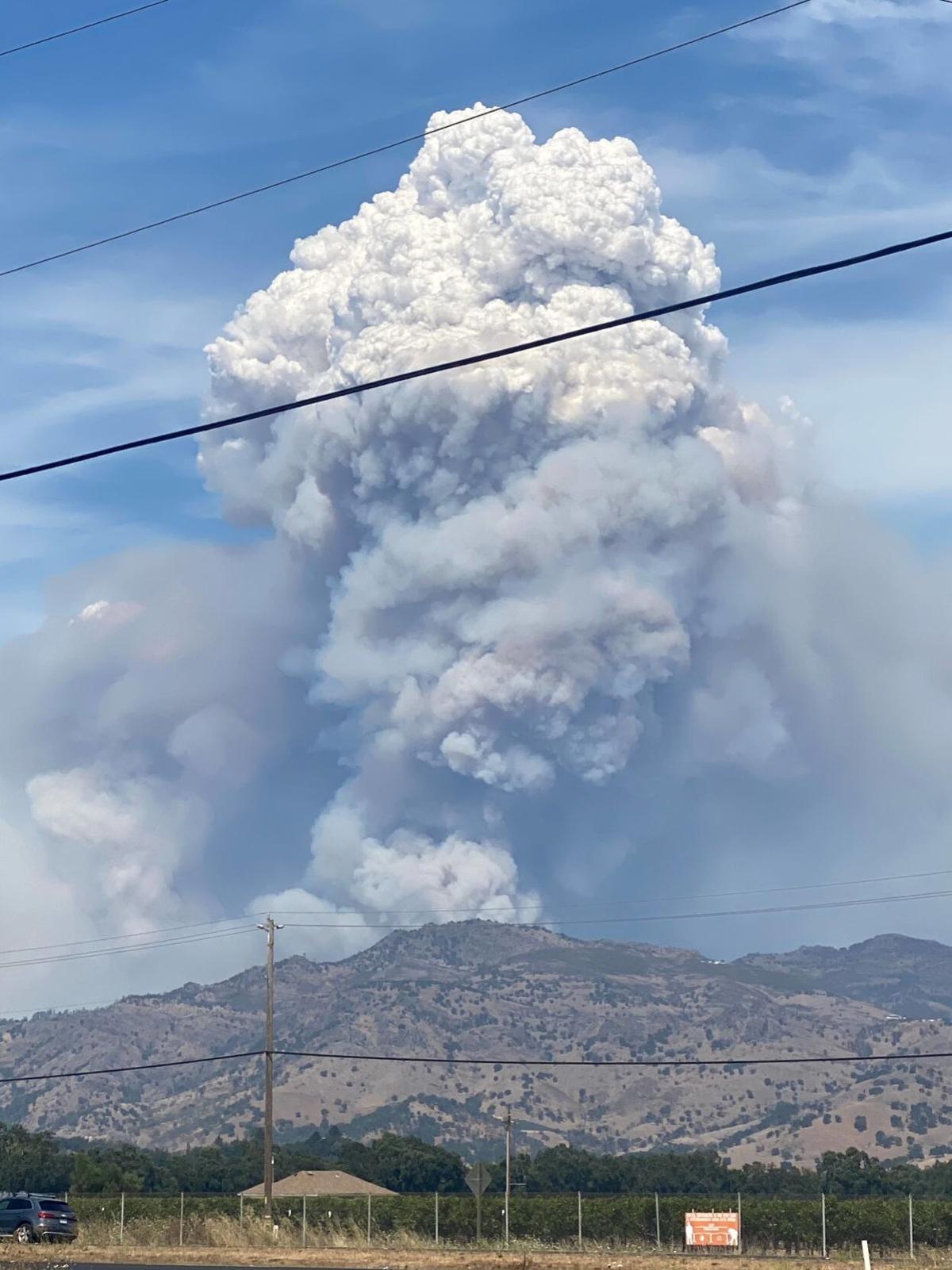 A plume of smoke from the Hennessey Fire Tuesday afternoon as seen from Carrell Lane in Napa, looking east over Highway 29. 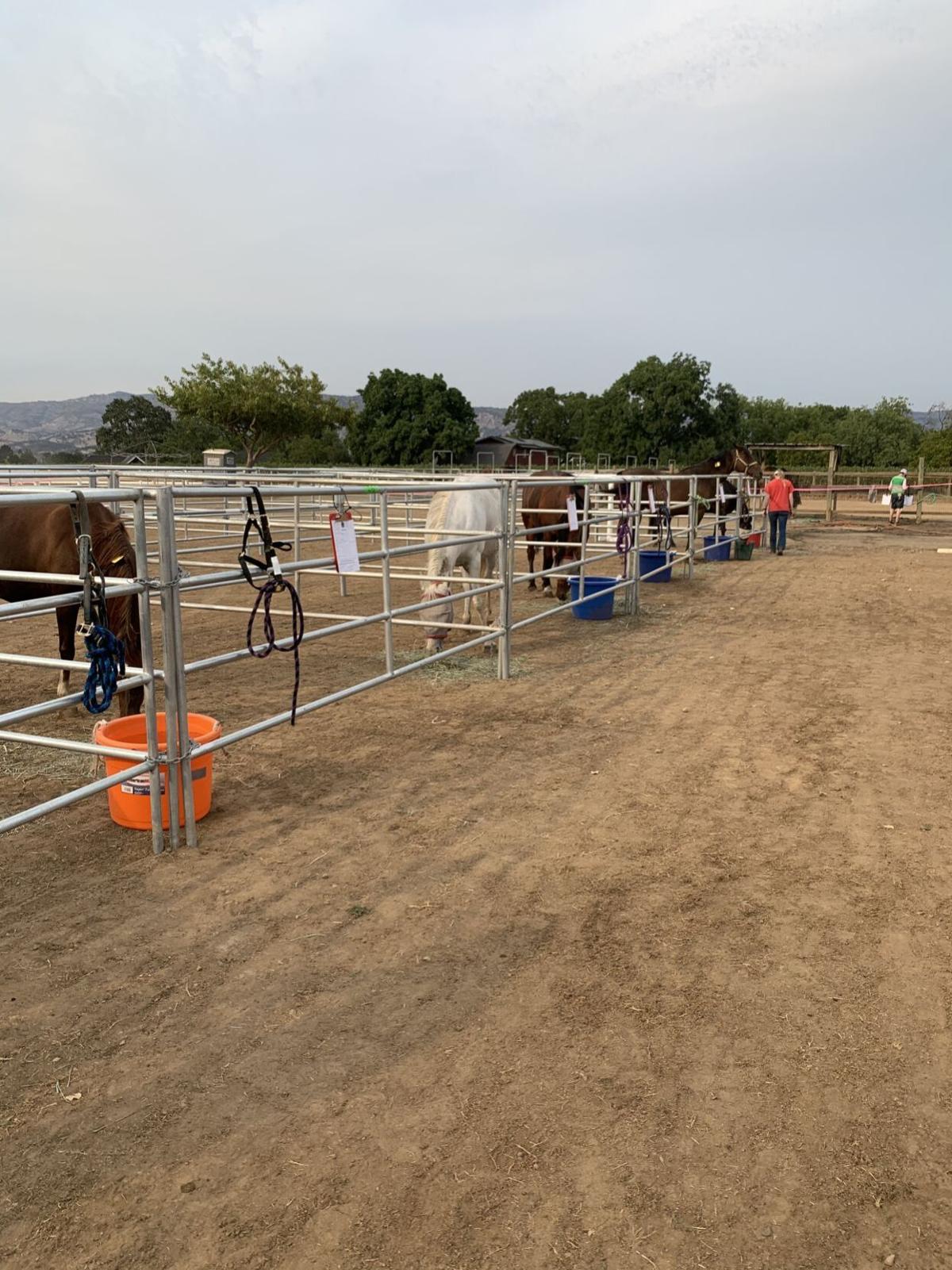 Volunteers with NapaCART took these horses to a shelter site Monday to get them away from the threat of the Hennessey Fire.

Frightening plumes of white and gray smoke rose above the eastern edge of the Napa Valley Tuesday afternoon, bringing back memories of the 2017 wildfires that burned for days and wreaked havoc.

Unlike the 2017 blazes, which destroyed hundreds of homes, this week’s wildfires had consumed only a few buildings as of Tuesday morning, but hundreds more were being evacuated.

Cal Fire reported about 31,500 acres blackened in Napa County — from the Hennessey, Gamble, 15-10, Spanish and Markley fires — as of 8:15 p.m. Tuesday, with zero containment and 1,900 structures threatened.

Some 1,900 Pacific Gas & Electric Co. customers in Napa County remained without power Tuesday night as a result of the wildfires, according to Deanna Contreras, spokesperson for the utility. Some customers were blacked out due to damage to PG&E equipment and others because of pre-emptive safety cutoffs made at the request of firefighters, she said.

The outages affected areas of Lake Berryessa, Pope Valley, St. Helena and Napa, according to Contreras. There is no timetable for the restoration of service until Cal Fire clears PG&E to enter fire zones and assess any equipment damage, she said.

Another 24,000 PG&E customers in Napa, Rutherford, Oakville, Angwin and Pope Valley also lost power at about 5:17 p.m. Tuesday but were restored by 7:30 p.m., Contreras reported.

These are tough fires to fight because of rugged terrain, triple-digit heat and “unfavorable” fire behavior, Cal Fire said in its morning report.

As the Hennessey Fire’s spread accelerated, Napa County issued an expanded evacuation order at mid-day Tuesday to include Berryessa Estates and Spanish Valley residential communities near Lake Berryessa. Two hours later, the order was expanded to include a portion of Soda Canyon Road, Highway 121 from Moskowite Corner to Wooden Valley Road, including the Circle Oaks community, and Atlas Peak Road from Bubbling Well Pet Cemetery to the end.

On Tuesday evening just after 7 p.m., evacuations were added for Wragg Canyon Road (from Highway 128 to the end of the road, including Pleasure Cove Resort) and Chiles Pope Valley Road (from Lower Chiles Valley Road to Pope Canyon Road).

At daybreak, the Hennessey Fire, which started east of Lake Hennessey, had threatened 205 structures and prompted mandatory evacuations near Highway 128 in the Lower Chiles and Chiles Pope Valley areas.

An evacuation center was set up Monday at CrossWalk Community Church in Napa for people forced out of their homes by the fires.

Elsewhere in Napa County, the Spanish Fire near Spanish Flat had reached 1,000 acres while the Markley Fire near the Monticello Dam had grown to 2,500 acres.

Cal Fire said it had 501 personnel fighting the fires, including 55 engines and 21 bulldozers. Air tankers were in short supply because of multiple fires in the region, the agency said.

Cal Fire said there was zero containment of the fires, with no prediction of when they would be under control.

Smoke from the Napa County fires is being pushed into Solano and Yolo counties where residents of Vacaville, Woodland and Winters are reporting air quality problems.

The Bay Area Air Quality Management District issued a Spare the Air alert for Tuesday and Wednesday. Wildfire smoke from numerous fires sparked by lightning over the weekend was expected to cause elevated levels of particulate pollution. Air quality is forecast to be unhealthful and smoke impacts are possible throughout the region, the district said.

Cal Fire was establishing a base camp at the Calistoga Fairgrounds. Approximately 400 fire fighters will be stationed there on a rotating basis.

In Angwin, the smoke billowed in the distance but had no discernible effect on air quality.

Stephen Smith pulled over to observe the smoke to the east from a lookout point along Howell Mountain Road above White Cottage Road.

Nina Elliott and her co-workers at Silverado Credit Union stepped outside to look at the smoke.

“It’s farther away than it looks, but when you see something like that ... “ she said, shaking her head. “That gets your attention.”

The Federal Emergency Management Agency announced Tuesday that it had authorized the use of federal funds to assist the state of California in fighting the fires, which have been labeled the LNU (Lake-Napa Unit) Lightning Complex. The cluster also includes two fires in Sonoma County, the 13-4 Fire west of Healdsburg and the 11-16 Fire north of Jenner.

FEMA said the fires threatened a water treatment plant and high-voltage transmission lines serving the cities of Napa and Calistoga. The federal agency said it would pay up to 75% of firefighting costs.

Gov. Gavin Newsom declared a statewide emergency Tuesday to help ensure the availability of vital resources to combat fires burning across the state, which have been worsened by the effects of the historic West Coast heat wave and sustained high winds.

NapaCART (Napa Community Animal Response Team) was activated by the Napa County Emergency Operations Center to evacuate and shelter animals in response to the Hennessey Fire. Volunteers evacuated 46 horses to a shelter site, the organization said.

Pacific Gas & Electric said it had de-energized a line outside St. Helena on Monday morning at the request of firefighters working the Hennessey Fire. This cut off power to 209 customers.

Power will be restored as soon as it’s safe to enter the area to assess PG&E’s equipment, said company spokesperson Contreras.

How to cope with pandemic emotional distress

Here’s a simple way that can help us cope during the pandemic. Buzz60’s Elitsa Bizios reports.

No injuries after VINE bus catches fire next to St. Helena gas station

Saturday's fire occurred just feet from the gas pumps at the 76 station.

Cal Fire said the fire was 0% contained as of mid-Monday afternoon.

Power outages affected a broad swath of the Napa Valley on Tuesday evening as the battle continued against lightning-triggered wildfires.

The Hennessey Fire has reached the Nichelini property. Whether it reaches the winery itself will depend on wind, weather and mitigation efforts.

Photos from the fires burning in Napa County

Smoke from Northern California fires have created unhealthy air in some parts of Bay Area.

Cal Fire: Calistoga in no danger of evacuation

The City of Calistoga is not in danger of evacuation, and Cal Fire has set up a base camp the encompasses most of the Napa County Fairgrounds.

ISO officials have said the blackouts became necessary in part because the state's solar energy supply naturally dissipates as the sun goes down.

The Hennessey Fire threw giant plumes of white and gray smoke into the sky Tuesday afternoon, within view of city of Napa residents. This photo was taken from near Soscol Avenue in Napa.

This was the view at 8 a.m. Tuesday from St. Helena of smoke from the Hennessey fire, which had burned 2,700 acres as of daybreak.

This photo captures the plumes from three fires burning in rural Napa County Tuesday afternoon. It was taken from Traina Vineyard south of Oakville Crossroad.

This is a shot of the glow from the wildfires looking east from the Napa Valley at 9 p.m. Monday.

A plume of smoke from the Hennessey Fire Tuesday afternoon as seen from Carrell Lane in Napa, looking east over Highway 29.

Volunteers with NapaCART took these horses to a shelter site Monday to get them away from the threat of the Hennessey Fire.