Become a Member
Read Today's E-edition
Share This
Top 10 Stories of 2021, No. 8: A turbulent year at the head of Napa County law enforcement
Share this
1 of 2 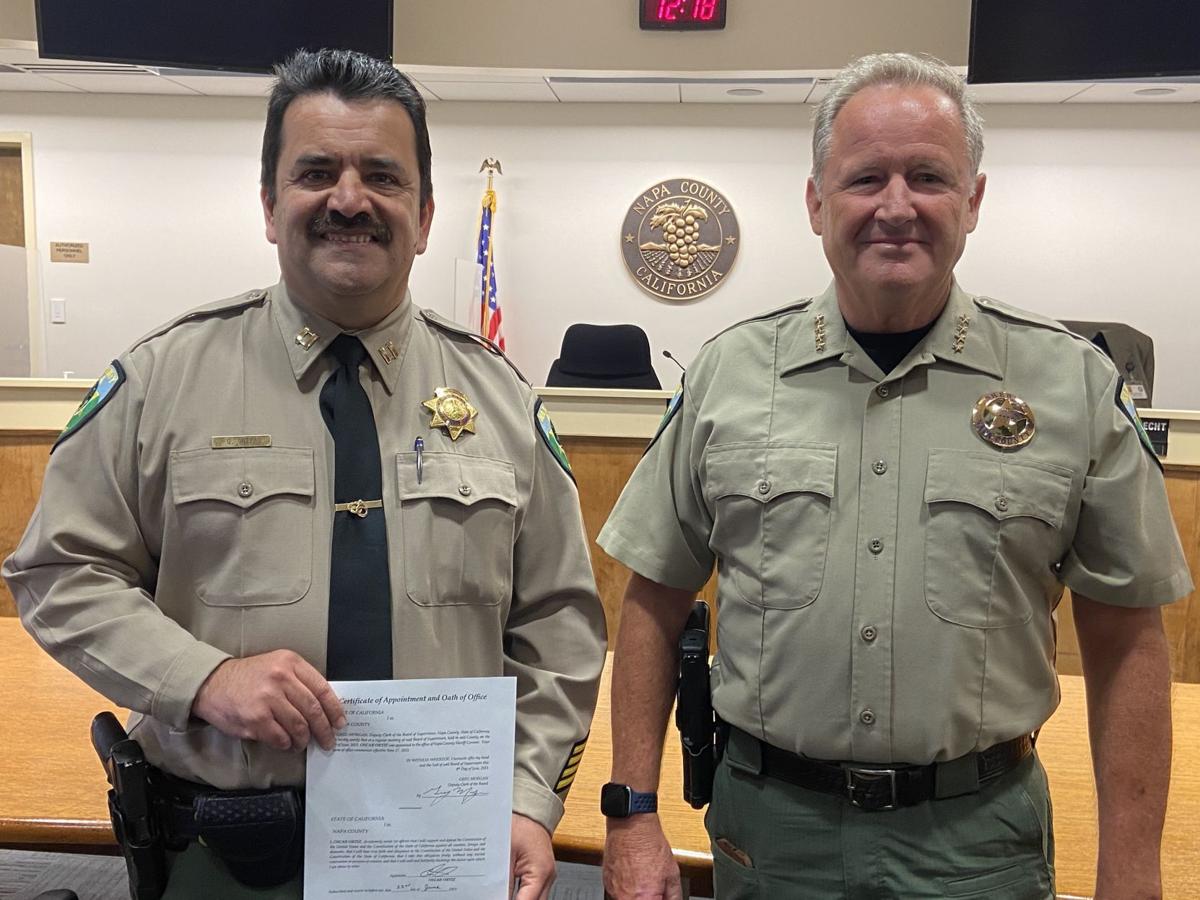 Oscar Ortiz (left) became Napa County sheriff in June upon the retirement of John Robertson (right). Ortiz will face former Undersheriff Jon Crawford for a four-year term as sheriff in the 2022 county elections. 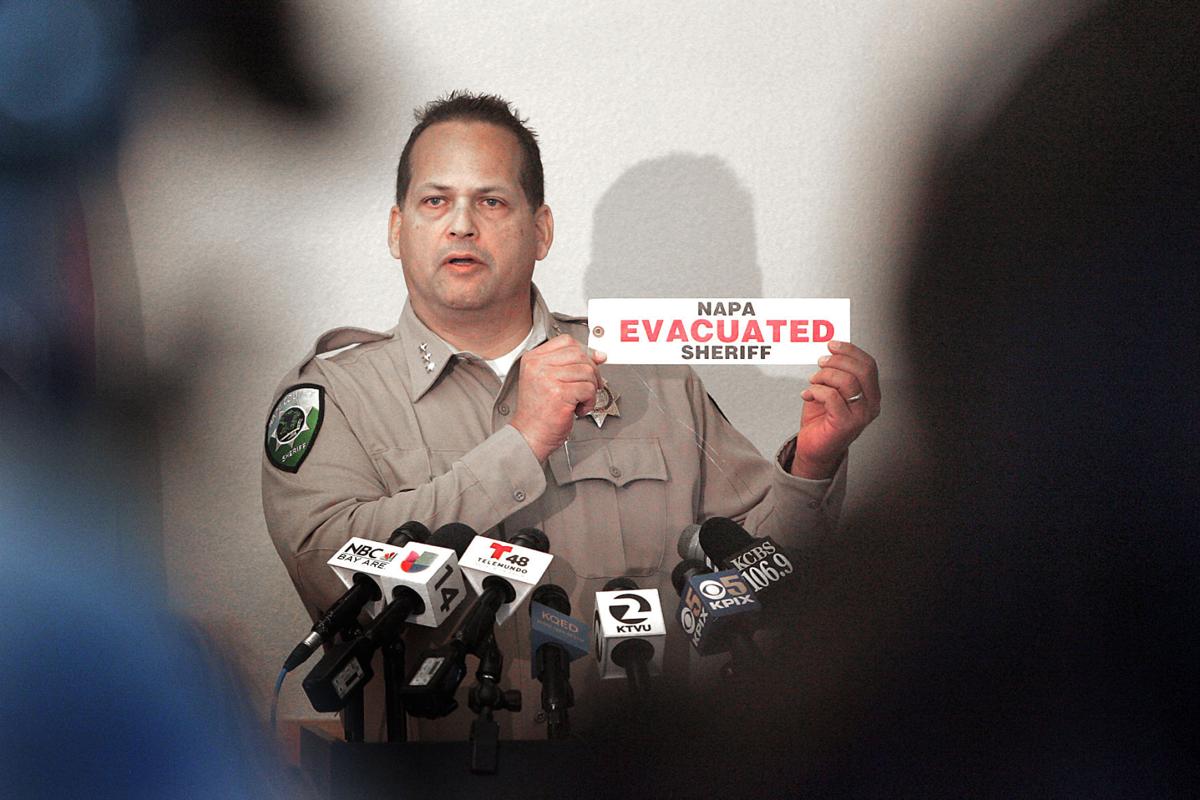 Former Napa County Undersheriff Jon Crawford, shown during a 2018 news conference, has declared his candidacy for county sheriff in the 2022 election.

Law enforcement leadership and election politics became scrambled in Napa County during 2021 when one longtime lawman became the new sheriff — and the old sheriff’s second-in-command pledged to unseat the new officeholder next year at the ballot box.

On June 23, American Canyon Police Chief Oscar Ortiz was sworn in as the new sheriff at the head of the Napa County Sheriff’s Office, replacing the retiring John Robertson for the last year and a half of his term. Ortiz also declared his candidacy to keep his new post in the 2022 elections — in which he will be opposed by Jon Crawford, the county’s former undersheriff who was let go by the sheriff’s office less than two weeks after Ortiz’s appointment.

The upcoming sheriff’s election will thus pit against each other two men with deep experience in public safety, including more than two decades each in the Napa sheriff’s office.

Ortiz, the new incumbent, is a Yountville native and Vintage High School alumnus who joined the department in 1996 and rose through the ranks, becoming the head of American Canyon Police in 2017. (The city contracts with Napa County for law enforcement services.) Crawford, a Napa County native who graduated from Justin-Siena High, had spent 22 years in the Sheriff’s Office, overseeing the department’s Community Services Bureau, Investigations Bureau and Yountville branch, by the time he announced his candidacy in a May 14 statement.

“The past several years have been trying times for all of us,” said Crawford, who had led the sheriff’s office’s daily operations since 2018. “Fires, the pandemic, drought, rising crime, and a national reckoning on race have all made clear the need for steady, competent leadership in law enforcement.”

Just four days after Crawford’s announcement, however, the Napa County Board of Supervisors chose another veteran of the force to become sheriff ahead of the election.

At the same meeting in which Robertson announced his retirement after nine years as sheriff, supervisors followed his recommendation to replace him with Ortiz after Robertson’s departure in June. Although Supervisor Ryan Gregory said he considered having the board interview both Ortiz and Crawford for the sheriff’s position, he ultimately joined fellow supervisors in accepting Robertson’s recommendation that Ortiz succeed him.

Napa County candidates for the June 2022 election are already fundraising, some of them in a big way. Here's who raised what.

By May 30, Crawford was no longer the Napa County undersheriff, nor was he working for the department in any role. While a county spokesperson declined to comment on the departure, Crawford described the exit as a termination.

“It’s purely political; there’s no other way of putting it,” he told the Napa Valley Register just over a week later. “I have an untarnished career. I’ve spent 22 years doing the best I can do to bring honor to the profession and the county. Nothing has changed.”

Crawford declined to say how his departure was politically motivated or what reasons the sheriff’s office gave him for letting him go, but made clear he would not be steered away from his bid to lead the department.

“It doubles my resolve to work harder and be successful in my bid to become the next elected sheriff,” said Crawford, whose campaign website stated that revenge was not his reason for running for the office, only the belief that he is the most qualified to serve.

For his part, Ortiz steered clear from discussions about his election opponent’s exist from the sheriff’s office. “It’s a personnel matter, and I and my campaign have no comment on the matter,” he said in June as he formally launched his campaign for a full four-year term.

A career that began four decades ago in San Mateo and brought Robertson to Napa County in 1991 came to an end Saturday.

Ortiz will hold the advantage of actually serving as sheriff by the time voters mail in their ballots in 2022, as well as the support of the Napa County Deputy Sheriffs Association. Meanwhile, Crawford’s campaign won some key early endorsements, including support from Napa County District Attorney Allison Haley and former Napa city Mayor Jill Techel, who served for nearly 16 years before retiring in late 2020.

While the leadership of Napa County public safety changed hands, so too did leadership of the county’s largest city police force.

Following the retirement of Robert Plummer as Napa Police chief on New Year’s Day, the city selected an interim replacement in Sylvia Moir. The former police chief of Tempe, Arizona became the first woman and the first openly gay person to hold the Napa position, although Moir’s hiring drew a tepid response from the director of a Napa LGBTQ advocacy group.

“I am choosing to reserve some hope that she will prioritize steps to serious police reform,” Anne Sutkowi-Hemstreet of the Rainbow Action Network told the Napa City Council before it approved Moir’s temporary hiring in February.

Moir’s leadership of the Tempe police force outside Phoenix, which ran from 2016 to 2020, included controversies over a deadly shooting in 2019 of a 14-year-boy who was holding an airsoft gun, as well as a 2020 incident in which an officer pointed a gun at a Black hotel employee and three other people during a search for an armed white suspect, according to media reports.

The permanent choice to lead Napa Police would be another woman, drawn from the department’s ranks. In July, the city announced the appointment as police chief of Capt. Jennifer Gonzales, who spent 20 years with Chico Police before joining the Napa force in 2015.

On her appointment, Gonzales described her goal of re-engaging Napa Police with the community it serves, continuing the work driven by year-long talks with community members and advocates about reforming and re-imagining local policing.

“We have to be inclusive and we love being part of those conversations,” said Gonzales, who took the helm at Napa Police 14 months after the murder of George Floyd in May 2020 sparked a wave of protests and debates about racially equitable policing. “They’re not always easy to have. And yet they’re vital for us to continue to serve the people in the way they need to be served.”

Now through the end of the year, the Napa Valley Register will be counting down the top news stories of 2021. Check back each day to see what made the list.

Top 10 Stories of 2021, No. 10: Emerging from pandemic, live music and events return to Napa Valley

Through the fits and starts of a slow emergence from COVID-19 restrictions, music and theater gradually returned to local stages and audiences.

After four years of allowing only medicinal cannabis sales in the city of Napa, adult-use retail sales will be opened up in the city next year.

Top 10 Stories of 2021, No. 8: A turbulent year at the head of Napa County law enforcement

Oscar Ortiz, chosen as Napa County's new sheriff in May, will run to retain his seat in 2022 against former Undersheriff Jon Crawford.

Students returned to Napa Valley Unified's campuses after months away due to COVID-19, but two schools are scheduled to close in 2022.

From water-dropping helicopters to vegetation management, Napa County upped its efforts in 2021 to try to prevent the next massive wildfire.

Top 10 Stories of 2021, No. 3: Napa's housing and homelessness crisis worsened by pandemic

Napa's housing crisis has remained a pressing concern this year, particularly alongside the economic impacts of the COVID-19 pandemic.

Napa County in 2021 weathered a drought of historic proportions.

Shelved by a rainstorm in 2019 and COVID-19 last year, the parade returned Saturday, bringing festively adorned floats and Santa Claus to crow…

Greenberg has been acting chief since June 2021, after Oscar Ortiz became the Napa County sheriff.

Oscar Ortiz (left) became Napa County sheriff in June upon the retirement of John Robertson (right). Ortiz will face former Undersheriff Jon Crawford for a four-year term as sheriff in the 2022 county elections.

Former Napa County Undersheriff Jon Crawford, shown during a 2018 news conference, has declared his candidacy for county sheriff in the 2022 election.