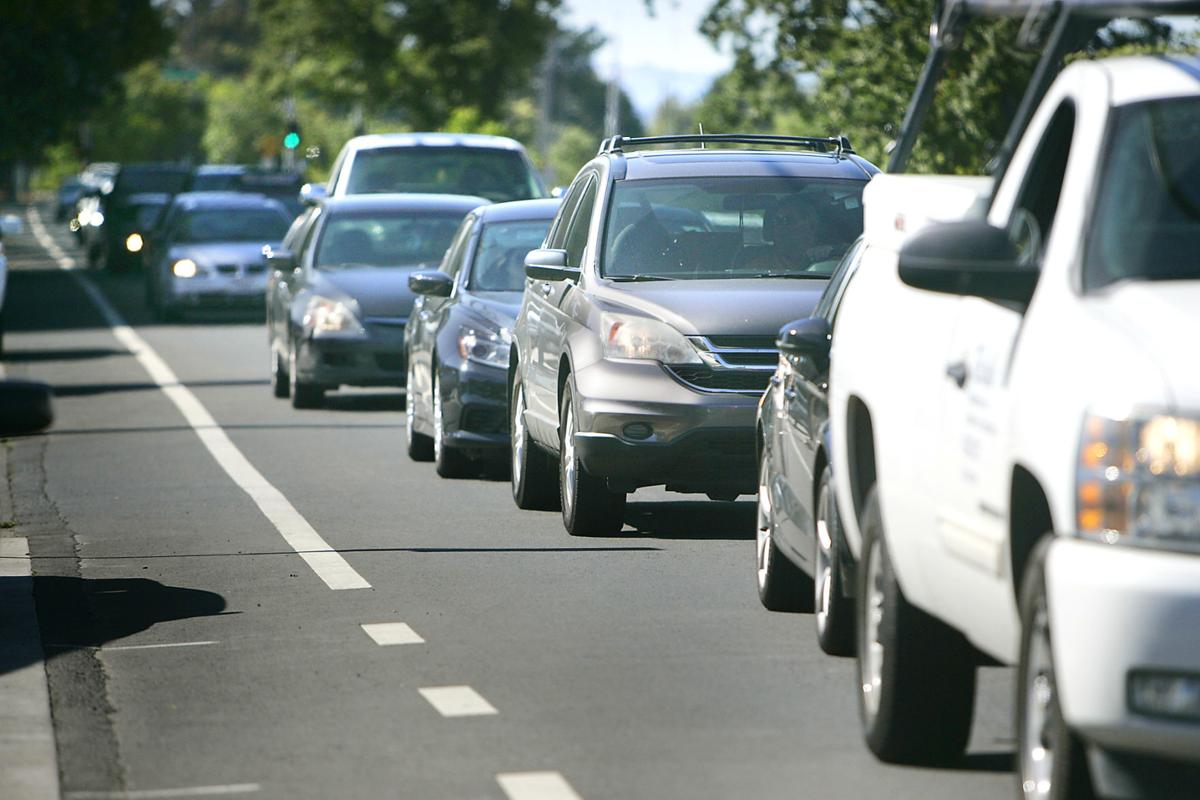 Traffic backs up on Solano Avenue near Wine Country Avenue on Wednesday afternoon. The recently installed signal lights in the area have created greater congestion, particularly at rush hours. 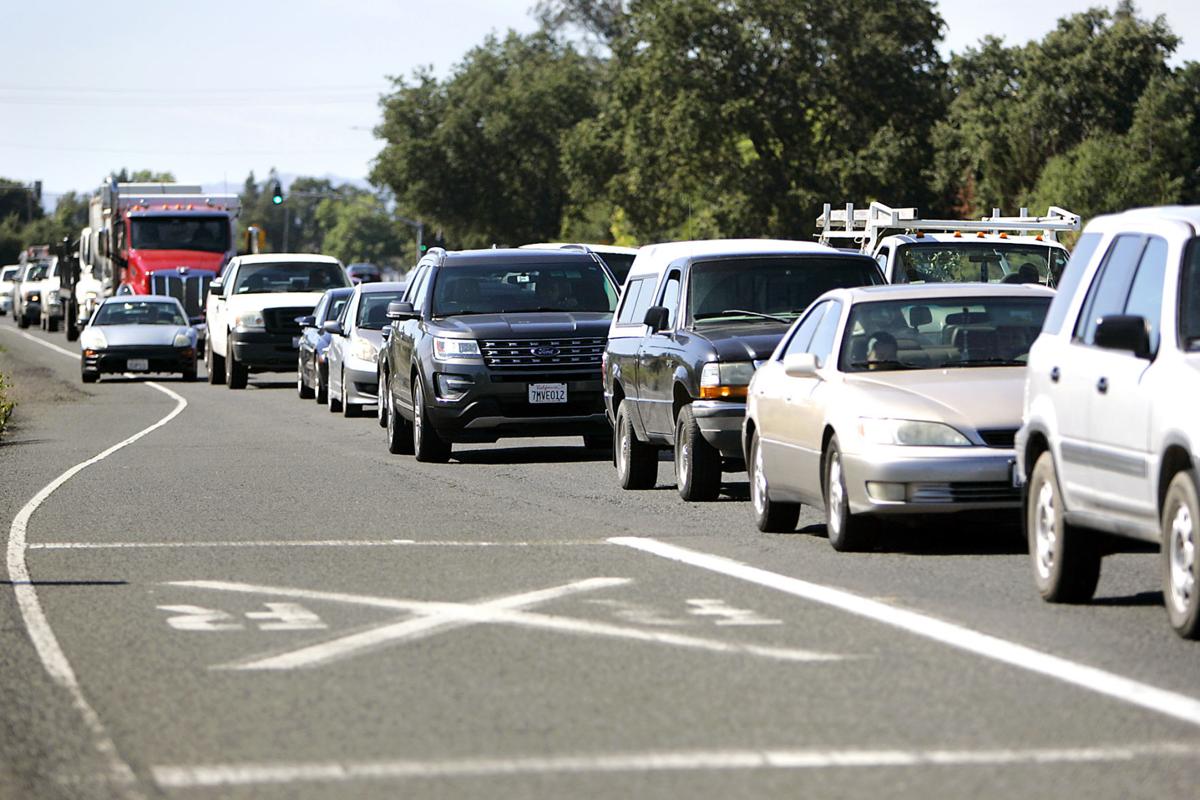 Traffic backs up on Highway 29 near Wine Country Avenue on Wednesday afternoon. Some are blaming the congestion on the recently installed signal lights in the area that were installed as part of the Napa Valley Vine Trail project.

Traffic backs up on Solano Avenue near Wine Country Avenue on Wednesday afternoon. The recently installed signal lights in the area have created greater congestion, particularly at rush hours.

Traffic backs up on Highway 29 near Wine Country Avenue on Wednesday afternoon. Some are blaming the congestion on the recently installed signal lights in the area that were installed as part of the Napa Valley Vine Trail project.

Rush-hour Highway 29 drivers face a traffic choke-point at the stretch with the signalized Trower, Wine Country and Salvador intersections that has grown more punishing in recent months.

New traffic signals along adjacent Solano Avenue are designed to help walkers and bikers safely reach the new Napa Valley Vine Trail segment sandwiched between this frontage road and Highway 29. The unintended result – bigger backups along both Solano and the highway.

“It’s created gridlock, essentially,” said Philip Pyrce, one of many residents dismayed by the situation.

City of Napa officials say drivers who regularly run this traffic gauntlet should see a change for the better at some point this summer.

Traffic signals on Highway 29 and adjacent Solano Avenue are a delicate interplay of coordination. Adding Solano Avenue traffic signals at Wine Country and Salvador avenues to help with Vine Trail safety has disrupted that balance, at least with the present signal timings.

Caltrans is responsible for signal timing at these locations, LaRochelle said. Napa is working with a traffic engineering firm and Caltrans to develop a better timing plan at all three Highway 29 intersections.

“The city wasn’t involved with actual timing,” LaRochelle said. “When delays started occurring, we thought that was kind of odd, because it shouldn’t have happened.”

One problem is that the pedestrian crossings for Solano Avenue and for Highway 29 are on the same timing phase, even though it takes longer to cross the much-wider Highway 29, LaRochelle said. The crossings should have separate times, he said.

Otherwise, Highway 29 traffic is periodically stopped for no reason.

“Once you stop that traffic, you start to get the backup and it’s hard to recover from that,” Deputy Public Works Director Eric Whan said.

Caltrans spokesman Vince Jacala said Friday that the agency understands community concerns exist regarding the timing at the traffic signals. Caltrans is working closely with the city and county to monitor the timing and will continue to do so once a traffic study is completed.

Highway 29 isn’t alone in having backups. The effects can also be seen on the Solano Avenue frontage road that passes by residential neighborhoods, a shopping center, a hotel and other uses.

Pyrce drives down Solano Avenue to bring his children to school. Before the new Salvador Avenue traffic signal was installed, he simply stopped at a Salvador Avenue stop sign and turned left to reach Highway 29. Pretty easy, he said.

Now cars back up in both directions on Solano Avenue as they sit at a Salvador Avenue red light. The light turns green, Pyrce goes to make his left turn and his way is blocked by a dozen or so oncoming cars in a traffic gulp that lasts through the cycle.

Arik Housley sees the changes at Solano/Wine Country avenues intersection from his adjacent Ranch Market. He liked it better before the new traffic signals replaced the stop signs.

Now, “Solano traffic is frequently traveling at 50 mph,” he said of non-rush hour conditions. “They’re not having to slow down when they have a green.”

Rush hour brings the opposite dynamic. As at Salvador Avenue, southbound Solano Avenue drivers wanting to turn left onto Wine Country Avenue to reach Highway 29 stop at the red light. When they get a green, they must keep waiting until all of the oncoming traffic has gone by.

Since there is no left turn lane, that means drivers behind them who don’t want to turn left must wait as well. Housley said the result is impatient drivers cut through the parking lot of the small shopping center with Ranch Market, sometimes driving too fast.

“It’s been pretty crazy,” he said.

Plus, it seems that Solano Avenue is traffic-choked at times in part because some drivers use it avoid the Highway 29 backups caused in part by the new signal timing woes.

Going back to having stop signs at Salvador and Wine Country avenues seems out of the question. Napa wanted the signals because of the new Vine Trail segment that links Redwood Road in Napa with Yountville.

“We felt it was important to provide another layer of safety for all those folks on the Vine Trail,” LaRochelle said. “We knew it would probably create a little bit more delay, but not the delay we’re seeing now.”

Pyrce sees Vine Trail users who don’t want to wait for a green light and who cross on red. He suggested bringing back the Solano Avenue stop signs at the Wine Country and Salvador intersections and giving Vine Trail users a light-up crossing they could activate.

Still, Pyrce has nothing bad to say about the new Vine Trail segment. He and his family enjoy riding bicycles on it.

“If in the end we’re stuck with the traffic, I’d rather have the Vine Trail and have the traffic,” Pyrce said.

Even solving the traffic signal timing issues won’t end congestion at Highway 29 and Trower Avenue. This is a busy signalized intersection, with drivers crossing the highway to reach the schools and other destinations on either side.

The ultimate, dream solution can be found in the Napa Valley Transportation Authority’s master road plan through 2040—build a $30 million Trower Avenue interchange.

That approach worked well at Highway 29 and Trancas Street, which until spring 2004 had traffic signals that created long backups. A $55 million underpass now brings Highway 29 under the busy cross street, with no wait at all for highway travelers.

Builders had plenty of right-of-way to work with at the Trancas intersection. In contrast, it’s a tight squeeze at Trower, with Highway 29 bordered by a city park and restaurant to one side and the Napa Valley Wine Train tracks on the other.

Even so, LaRochelle said an overpass for Highway 29 can be built within the existing right-of-way. The trick is finding a way to keep highway traffic moving during construction.

City and state officials will have plenty of time to figure all of that out. LaRochelle said a Trower interchange could be two decades away.

For now, traffic-weary drivers will have to settle for that hoped-for improvement in traffic signal timing along this section of Highway 29.