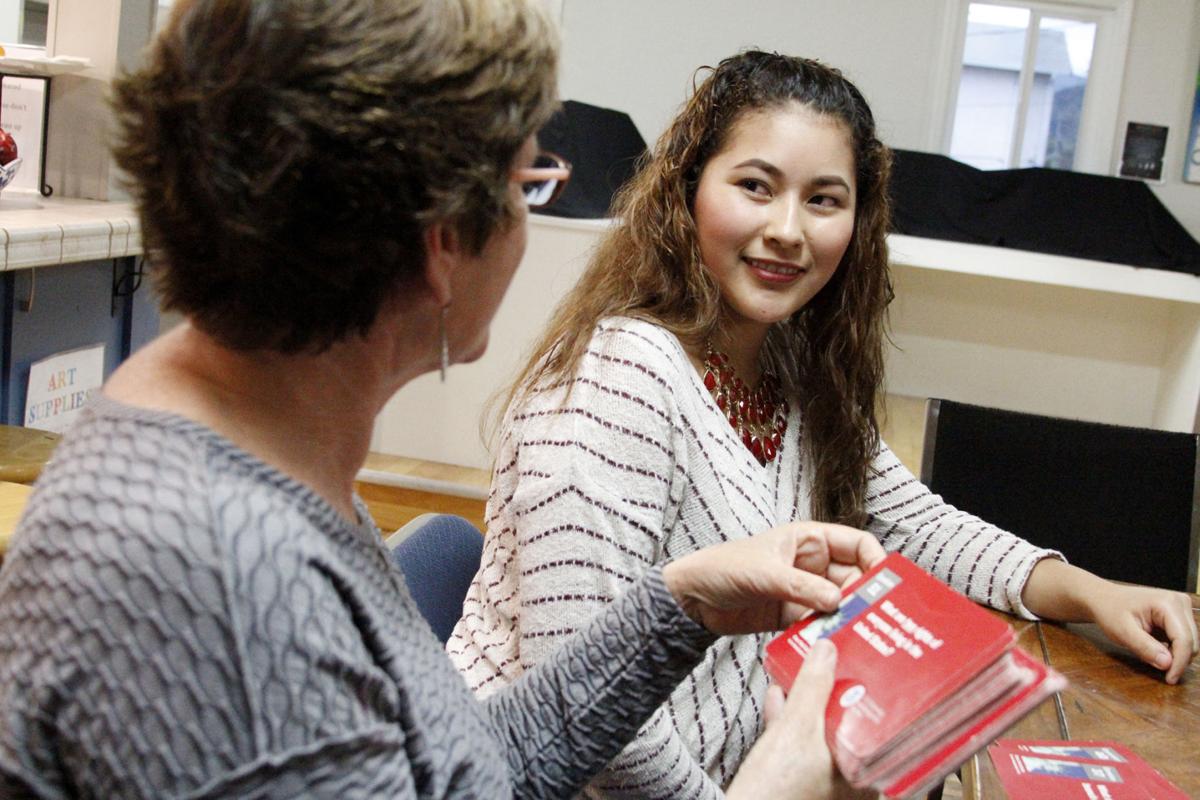 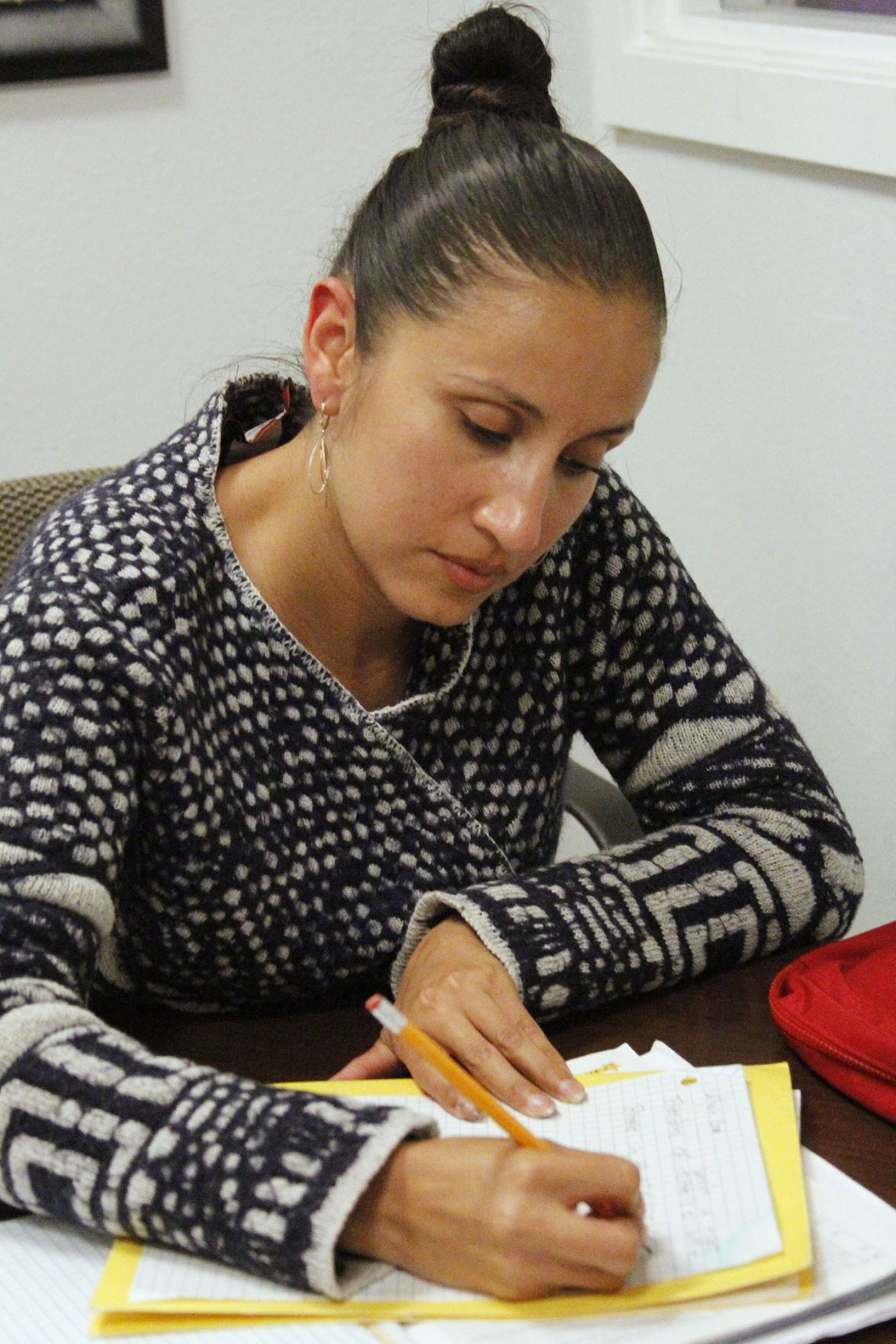 Maricela Perez gets help studying for her citizenship test at VOICES on Lincoln Avenue in Napa on Tuesday. In addition to learning English and studying for the citizenship simultaneously, Perez also works full-time and is a mother of three. 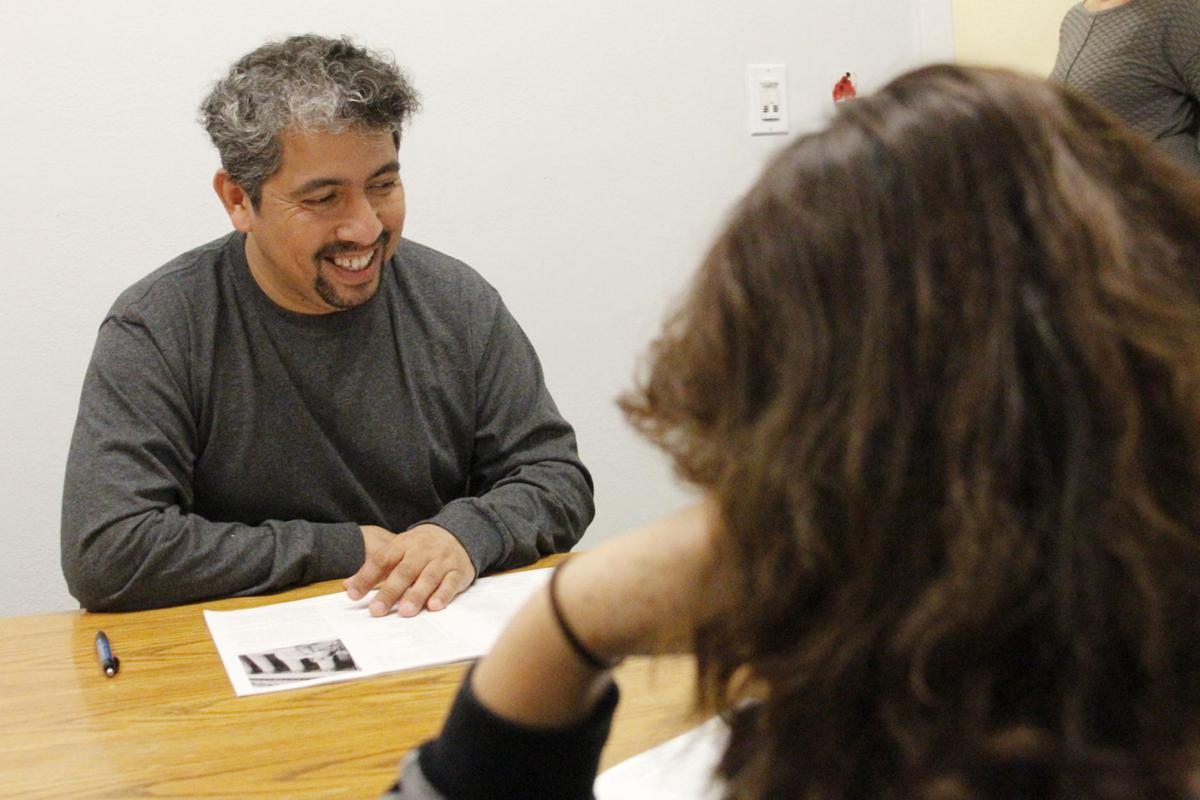 Adrian Zuloaga and Rosa Velasquez get help studying for their citizenship test at VOICES on Lincoln Avenue in Napa on Tuesday. 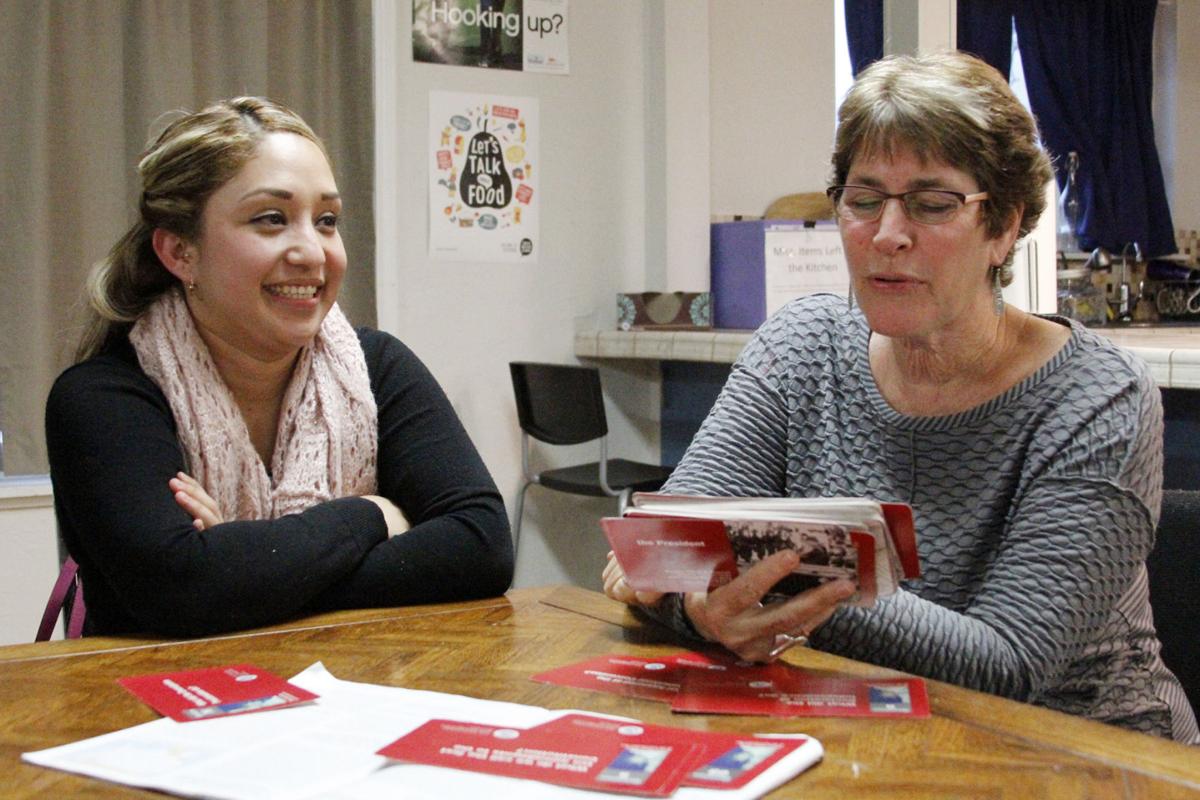 Cecilia Lopez studies for her citizenship test using flashcards with help from Leslie Medine at VOICES on Lincoln Avenue in Napa on Tuesday. 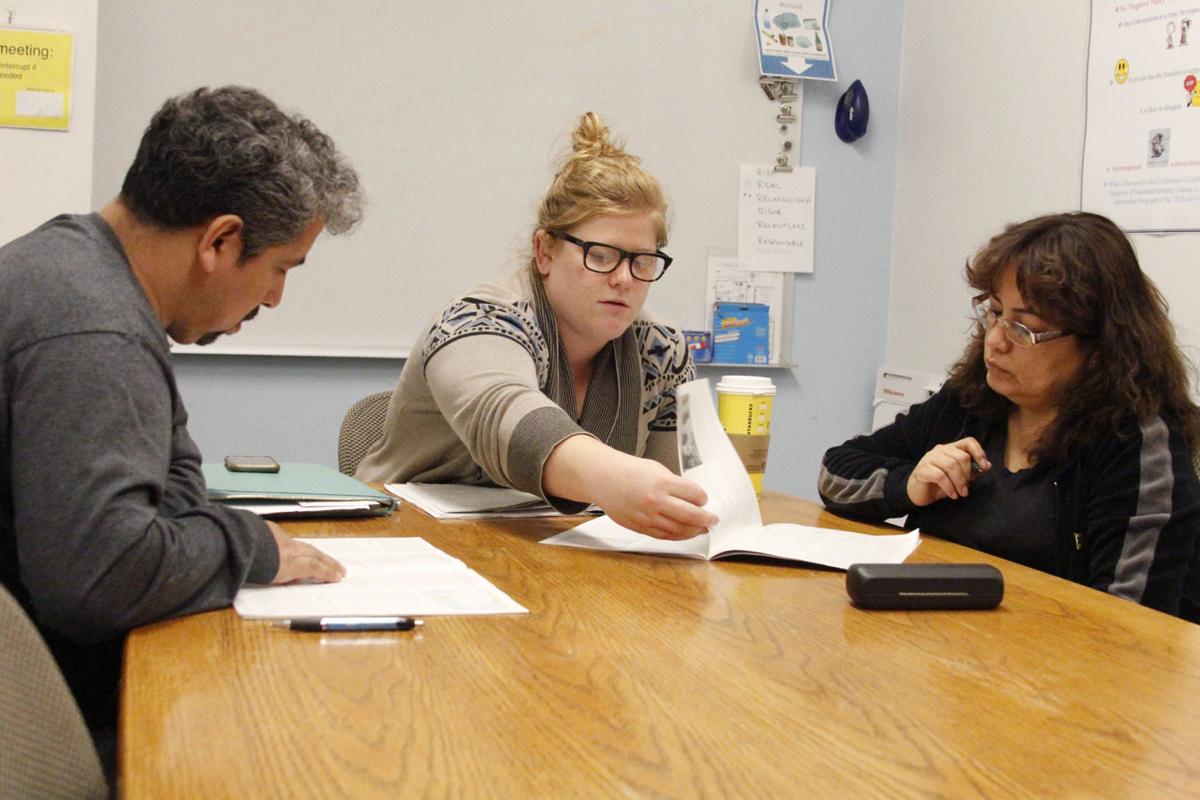 Adrian Zuloaga and Rosa Velasquez get help studying for their citizenship test from tutor Lauren Biehle, center, at VOICES on Lincoln Avenue in Napa on Tuesday.

Seated next to his daughter and wearing a red hat adorned with an American flag, Ygnacio Lopez told the story of how he – a 67-year-old uneducated man from Mexico – came to be an American citizen.

Lopez first came to the United States when he was 30. He couldn’t read or write in Spanish and didn’t speak any English. More than three decades later, he still struggles with both, but with the help of volunteers from Napa’s On The Move, Lopez spent months studying American civics, passed his citizenship test and interview.

“I didn’t want, but my daughters tell me ‘you have to become (a citizen),’” Lopez said in Spanish. Three out of five of his daughters have made it to the United States and to Napa County where Lopez spent his life working in the fields.

“I was working hard to give them the best,” he said. “My priority was to give them a better education in Mexico.”

His daughter, Cecilia Lopez, 24, did just that. She finished high school and even studied a year of nursing in Mexico. When she came to the United States at age 19, she got a job as a dishwasher and currently works in a warehouse driving a forklift.

“It is my goal for citizenship,” she said. “I very nervous for the interview.”

Cecilia Lopez applied for citizenship in January and has already provided her fingerprints for her biometric services appointment, which is used to confirm the identity of applicants in addition to running a background check.

“I tell her ‘please don’t be afraid,’” Ygnacio Lopez said.

The test, though, might actually be more difficult for Cecilia than it was for Ygnacio since she has to take it in English.

“Ygnacio is almost an exception,” said Henni Cohen, one of the tutors at On The Move.

Thanks to Ygnacio’s age and how long he had been a legal permanent resident, he was able to take his test and do his interview in Spanish. His daughter, who has been in the U.S. for only a few years and isn’t fluent in English, has to not only study for the civics test and memorize her application answers, she has to do it all in English.

“It may be called an interview, but it’s actually a test,” Cohen said. And, like any other test, she said, it can be stressful, especially if you’re new to the language you’re taking it in.

“The test can range from 15 minutes to 45 minutes – we never know what’s going to happen,” said Leslie Medine, founder and former executive director of On The Move.

Even if someone answers every question correctly, the interviewer can still fail them, Medine said. The majority of people who use the On The Move tutors pass, but the few who didn’t, did not fail because they got the answers wrong. They failed because the interviewer decided they didn’t know enough English, she said.

“It depends on the interviewer,” agreed Miriam Rodriguez. Rodriguez said that when she took the test two years ago, she was lucky – her interview took only 10 or 11 minutes.

“It was really, really hard for me to take the test in English,” she said, but the five months of preparation she did with her tutors made her more comfortable and confident.

Since becoming involved with On The Move and earning her citizenship, Rodriguez, who had been working at Subway, now works as the site coordinator for Napa Valley Parent University at the McPherson Family Resource Center.

“For adults, the big barrier is the language,” Rodriguez said. “This space, they give you the tools.”

“I’m nervous – scared because my first language is not English,” said Giuliana Mendoza, 23, who is preparing now for her citizenship interview and test. Mendoza said that she came to Napa when she was 18-years-old – her family gave her the option to come with them or to stay back in Mexico alone.

“I cry because I don’t want to come,” she said. Now, though, this is where her husband and her children are. That’s why she decided to become a citizen, so that, no matter what, she and her children could be secure.

Mendoza hopes to pass her citizenship test with help from her tutors.

“They give me a lot of support,” she said. “They make me really comfortable – make me feel special.”

The tutors, who are all volunteers, help each student according to their needs. In addition to helping them study using a textbook and flashcards, the tutors also help their students practice speaking in English, role-play the interview and, sometimes, they’ll even help get them to the test, which for people in Napa County, is usually in San Francisco.

On The Move’s tutoring program is part of the One Napa Valley Initiative — is a county-wide effort designed to help Napa County’s foreign-born residents become citizens. On The Move partnered with Puertas Abiertas, the Napa Valley Community Foundation, UpValley Family Centers, and the International Institute of the Bay Area as well as more than 125 donors to launch the initiative.

Getting ready to take the citizenship test?

Tutoring is available every Tuesday from 6 to 7:30 p.m. at VOICES at 780 Lincoln Avenue in Napa.

Registration is not required.

Citizenship isn’t just a legal status, it’s an expense. And the people who are helping to cover those expenses – services like Puertas Abierta…

ST. HELENA — Even though answering 10 questions on the government, history and laws of the United States wasn’t hard, I still got two wrong. I…

Blanca Dixon asked me some tough and personal questions recently, and I had to answer them. All 32 of them.

We met at a local business in Napa County that caters to the Hispanic community. Her hair was pulled back into a ponytail and she was wearing …

As immigration and the threat of deportations become a greater concern for their congregations, churches are trying to figure out what their r…

The Trump administration’s announcement Tuesday that it will be phasing out a program that has protected about 223,000 young immigrants in Cal…

Maricela Perez gets help studying for her citizenship test at VOICES on Lincoln Avenue in Napa on Tuesday. In addition to learning English and studying for the citizenship simultaneously, Perez also works full-time and is a mother of three.

Adrian Zuloaga and Rosa Velasquez get help studying for their citizenship test at VOICES on Lincoln Avenue in Napa on Tuesday.

Cecilia Lopez studies for her citizenship test using flashcards with help from Leslie Medine at VOICES on Lincoln Avenue in Napa on Tuesday.

Adrian Zuloaga and Rosa Velasquez get help studying for their citizenship test from tutor Lauren Biehle, center, at VOICES on Lincoln Avenue in Napa on Tuesday.