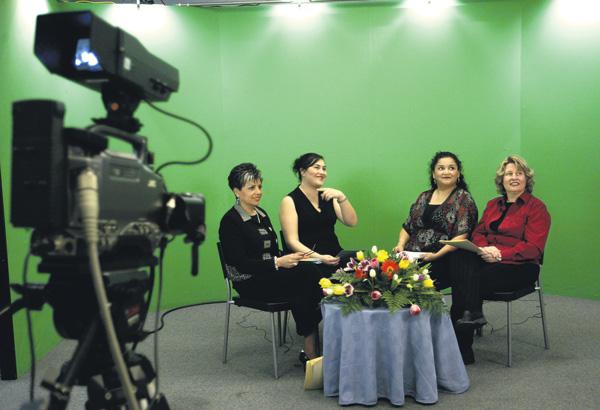 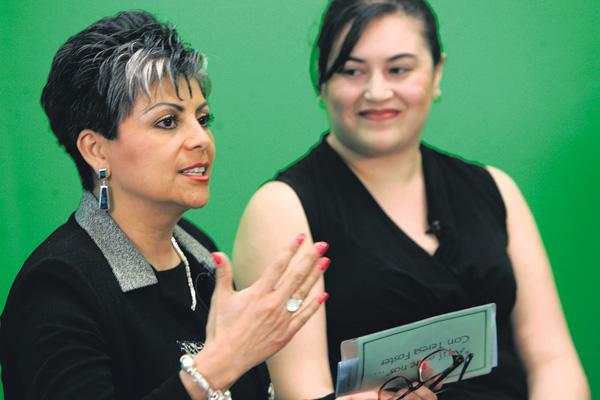 Lianne Milton/Register
Teresa Foster and Vicka Llamas are co-hosts of Aqui Entre Nos, a Napa Channel 28 television program about happenings inside the Latino community. The show airs Thursdays at 8:30 p.m., and Saturdays at 4:30 p.m.
By CARLOS VILLATORO
Register Staff Writer

When they’re not working full-time jobs, studying or more, they host the local community access cable TV show “Aquí Entre Nos,” which translates to “Here Among Us.”

“The challenge for me is time,” Foster said in Spanish. “It’s not easy. My family understands that my career is part of the family. They help me.”

As busy as they are, Foster and Llamas say it’s worth the sacrifice of the eight or more hours that they put in to their cable television show on Napa Channel 28 each month. The show has aired in Napa for about two years and was designed to address rising teen birth rates among Latinas in Napa County.

Since its inception, “Aquí Entre Nos” has expanded to address subjects that are often considered ‘taboo’ such as teenage drug and alcohol abuse, academic expectations of children and preventing adolescent crime.

“We want parents to be able to communicate with their kids,” Llamas said.

Communication is an important part of the family structure in Mexico and other Latin American countries, Foster said, and when the family moves to the United States communication can suffer. Parents and children face many challenges when attempting to assimilate into American culture.

“When a family moves to the United States, they are coming to a country that does not belong to them,” Foster said. “In the schools, people don’t speak their language … (and they don’t celebrate their) customs.”

Foster said children who attempt to blend into the culture by wearing the hippest clothes, listening to new music, speaking English and hanging out with friends of different races may not feel comfortable communicating with their parents because they may feel that their parents no longer understand them. On the other hand, parents who see the changes happening in their children may not know how to talk to them about it.

“Aquí Entre Nos” doesn’t just address serious subjects of assimilation. It also highlights services such as the Napa County Office of Education’s Lending Closet, a program that lends prom dresses to young ladies throughout the county.

Llamas and Foster use “Aquí Entre Nos” to reach out to those families — children and parents — to help facilitate that communication. Foster and Llamas are not alone in their mission — they have help from local teachers, doctors, psychologists and other specialists and feature them on their show as guests.

‘Giant Arc’ of galaxies raises questions about the Cosmological Principle

How to watch the last Supermoon of 2021

How to watch the last Supermoon of 2021

Motorists report shorter backups than when traffic lights ruled, but are the roundabouts also safer?

Now used to teach agriculture, the property is planned for 53 single-family homes, with 13 of them having accessory dwelling units.

Napa Police is investigating an assault that took place early Tuesday morning in a downtown parking lot, the department announced.

For the first time in 20 years, Napa has a new, dedicated record store: Right On Records !!!. Check it out.

The somewhat confusing world of a "full reopening" from COVID-19 begins on June 15.

Yountville's annual celebration of fine arts and wine produced one of the county's largest gatherings in more than a year.

Lianne Milton/Register
Teresa Foster and Vicka Llamas are co-hosts of Aqui Entre Nos, a Napa Channel 28 television program about happenings inside the Latino community. The show airs Thursdays at 8:30 p.m., and Saturdays at 4:30 p.m.
© Copyright 2021 Napa Valley Publishing, 1615 Soscol Ave. Napa, CA | Terms of Use | Privacy Policy | Do Not Sell My Info
Powered by BLOX Content Management System from TownNews.com.
You don't have any notifications.