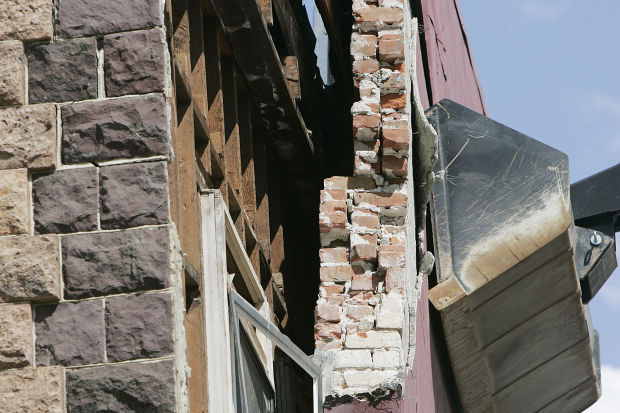 Brian Silver is using equipment to temporarily support the tilting south wall of his Center Building at Brown and Third street so it doesn't collapse. A plan to repair his red-tagged buildings, damaged in the Aug. 24 earthquake, is beginning, Silver said. 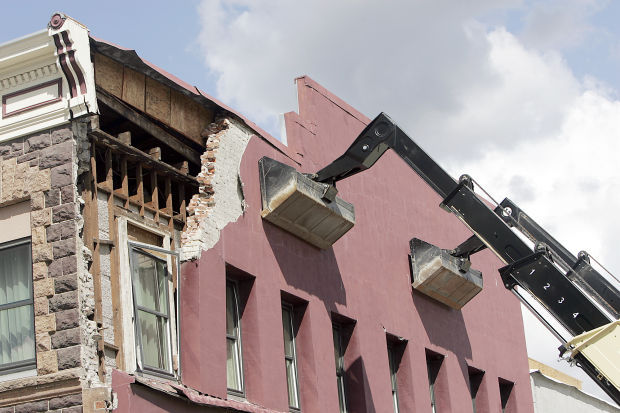 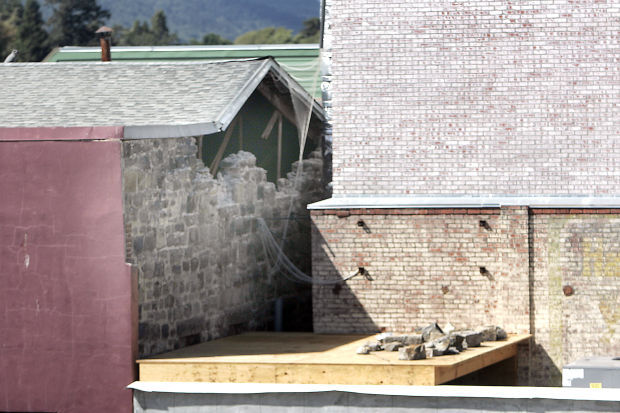 The partially collapsed eastern-facing wall of the the Center Building at Third and Brown streets, is photographed from the third floor of the Criminal Courthouse on Third. Roof reinforcement was installed on an adjacent building facing Main Street to protect it from falling blocks.

Two large mechanical arms have been temporarily positioned to prop up one of downtown’s most earthquake-damaged buildings at the heart of a retrofit controversy.

“We are moving along very quickly,” owner Brian Silver said Friday afternoon about plans to repair his Napa Law Center on Brown street, opposite the Historic Courthouse, and an adjacent structure that were both red-tagged after the Aug. 24 earthquake.

The city identified Silver’s buildings as needing earthquake retrofitting years ago. But Silver balked, saying he questioned the city’s priorities. The city set a 2009 deadline to brace stone and brick buildings with steel, but Silver let it pass without hiring a contractor.

Silver and the city have been criticized in the wake of the earthquake and the damage it wrought to his stone buildings: Silver for ignoring a city mandate and the city for not enforcing it.

This repair work can’t go fast enough for Michael L. Holcomb, owner of two adjacent buildings – one home to Molinari Caffe on Brown Street and the other Velo Pizzeria on Main Street. Silver’s progress is “slow,” he said.

Silver came under fire after structural damage to his buildings caused the city to temporarily red-tag neighboring businesses out of fear that Silver’s properties might collapse.

Silver said he had been attempting prior to the earthquake to secure financing to pay for the seismic reinforcement his properties required. But now, under pressure from both the city and adjacent businesses and building owners, he is making it happen, he said.

“We are going to tear down the old city council chambers (currently used as a law library) and we are shoring up both buildings,” he said. After the work is done, “They will not be susceptible to any earthquake damage unless it’s a huge one,” he said.

Six tenants have been displaced from Silver’s buildings, including attorneys and jeweler Shig Kita.

After the old city council chambers, adjacent to Molinari Caffe, is demolished, Silver hopes to build a new building in its place, one inspired by a Masonic temple formerly located on Second Street. “I would like to (recreate) that building in even greater grandeur than what it originally was,” he said.

All brick and stone on both buildings will be either removed or supported with steel bracing, he said.

As for the Center Building’s masonry wall that partially collapsed toward Third Street, it will be removed entirely and replaced with a wall made of wood, steel or other materials, Silver said.

Silver said he didn’t know how much it would cost to retrofit the buildings. “I’m trying to keep the cost as reasonable as possible. I’m hoping that it’s not beyond my means.”

He said he couldn’t make an accurate prediction about when the work would be done. “We are moving as fast as we can,” he said.

“It’s been more than a month (since the quake)”, Holcomb noted. “If this would have been done the day after the earthquake, then we wouldn’t have spent $120,000 defending ourselves from his building.”

Holcomb said he has spent almost $30,000 on wood to create protective roof coverings for his adjacent commercial buildings, plus labor and shipping. He also gave his tenants rent abatement for a month and paid close to $10,000 in salaries for both the café and pizzeria employees, he said.

Holcomb compared Silver’s damage repair schedule to that of Harry Price, owner of Napa Square that was also badly damaged in the quake.

“Harry Price was on the scene hours after the earthquake” and has been diligently trying to get tenants back inside, said Holcomb. Silver didn’t demonstrate the same motivation, he asserted. “I don’t think Brian Silver has shown one bit of concern for anyone but himself.”

Holcomb said he was “absolutely” considering legal action to recoup his costs. “His building damaged ours. Sounds like a liability claim,” he said. “I want to wait to see what the city does first. But if we have to we have to.”

A representative from the city’s community development department and the city’s building department could not be reached for comment on Friday.

Dry Creek Road near Napa is being reborn

Napa County will turn the mile stretch of Dry Creek Road north of the city of Napa essentially into a new road.

PG&E is offering customers a two-day advance warning of a potential Public Safety Power Shutoff, beginning Monday. More than 1,500 Napa County customers were notified that they may be affected.

Brian Silver is using equipment to temporarily support the tilting south wall of his Center Building at Brown and Third street so it doesn't collapse. A plan to repair his red-tagged buildings, damaged in the Aug. 24 earthquake, is beginning, Silver said.

The partially collapsed eastern-facing wall of the the Center Building at Third and Brown streets, is photographed from the third floor of the Criminal Courthouse on Third. Roof reinforcement was installed on an adjacent building facing Main Street to protect it from falling blocks.