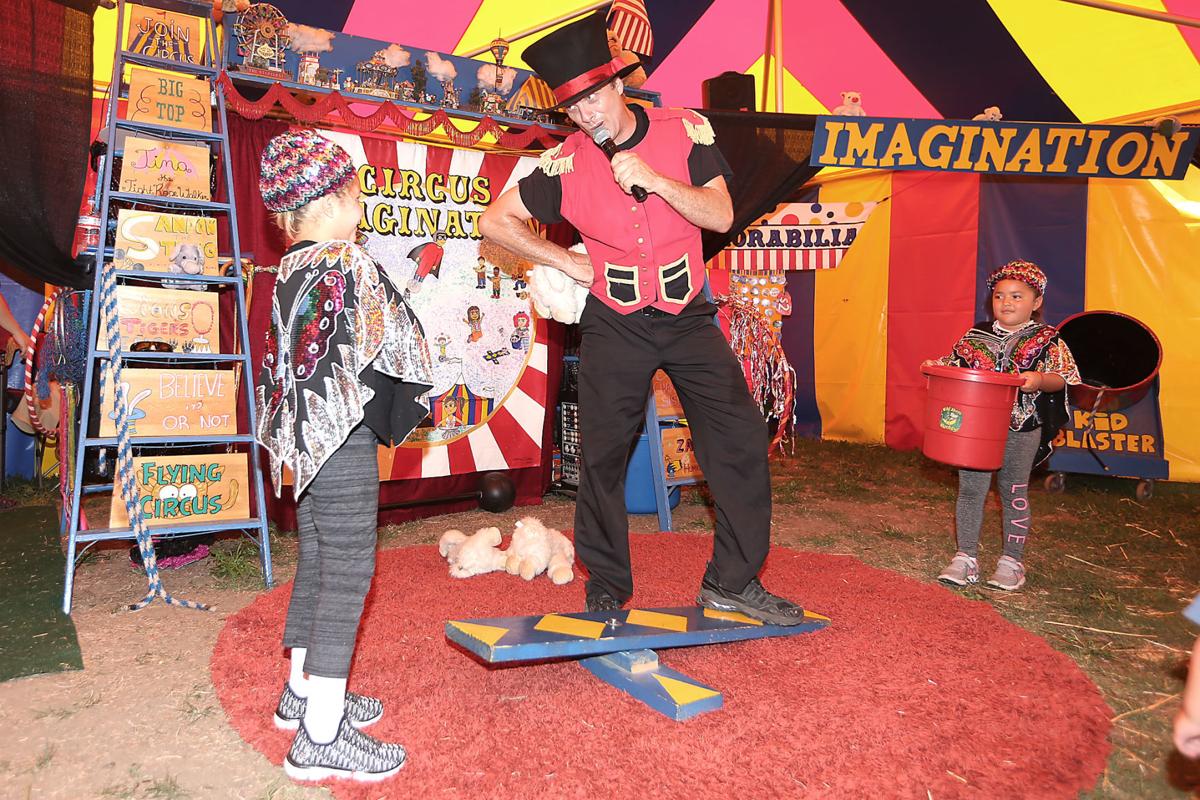 Caton Raintree-Hegwer, center, of Circus Imagination recruits a pair of youngsters to help with his act on Thursday on Day 2 of the Napa Town & Country Fair. 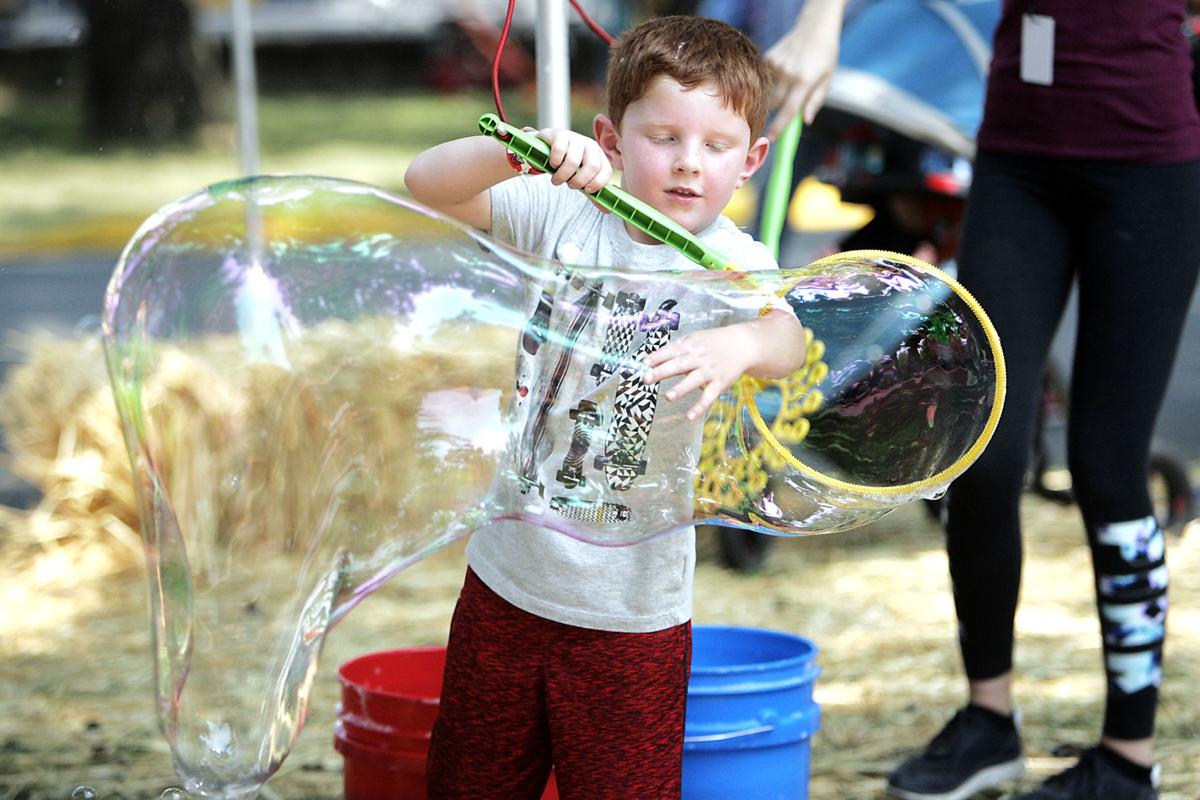 Brodey Nichols, 6, of Napa plays with a giant bubble at the Napa Town  & Country Fair on Thursday afternoon. 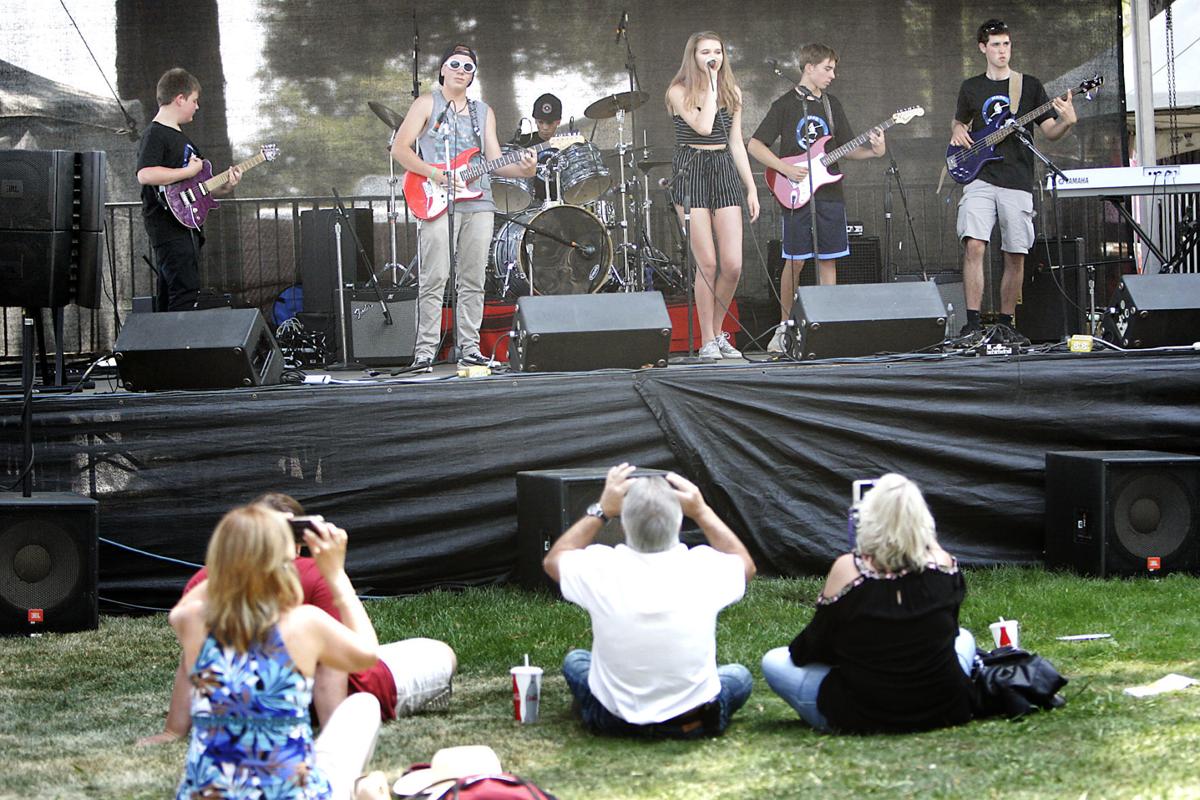 Talking lions, flying monkeys and human cannonballs right here in Napa? That’s right. At the Town & Country Fair, children can be or do anything and, for at least this week, they can even be the star of the show with a little help from Circus Imagination‘s Ringmaster Caton Raintree-Hegwer.

With his exaggerated facial expressions and voice, the top-hat-wearing ringmaster lures families into his family’s “little big top” circus for pretend play that keeps children engaged and parents laughing.

Raintree-Hegwer says that children wanting to be in the show should sit in the front row and show off a giant smile and they’ll “almost guaranteed to be part of the circus.”

During Thursday’s afternoon show, children eager to participate were dressed up in costumes made by Raintree-Hegwer’s wife, Carolina, and paraded into the center of the ring during each of their acts.

The acts have names like “Tina the Tight Rope Walker” and “Sandow the Strong.” In one act, “Marco the Lion Tamer,” one child dressed in a safari outfit takes the stage with some lions, tigers and bears. Then, before the show is over, the “Champagne Sisters,” decked out in sequin hats and shawls, work together to launch a monkey into a bucket.

“Everyone’s heard of a barrel of monkeys, We have a bucket of monkeys!” Raintree-Hegwer told the crowd as he prepared each primate for launching. The sweet, silly humor wasn’t lost on adults who laughed as he made references to Costco and the “supersize it” phenomenon.

Giselle Gallegos, 6, who played one of the Parisian sisters, said that it was just like playing pretend at home except with an audience. She even had a piece of advice for other potential circus performers:

“I would say don’t be nervous because it’s always fun to at least try.”

“I thought it was really cool that they interact with the kids and show them to be able to use their imagination,” she said. Everything they did in the show, she said, the kids could do at home. The fair in general, she said, is a great opportunity to bond with your children before they return to school.

Raintree-Hegwer has been working in the fair business for almost 35 years. His father started Circus Imagination in 1984 when Raintree-Hegwer was just a child.

“My dad used to use me as a plant and stick me out in the audience” to be the first child to raise his hand to participate. Once the other kids saw how excited he was, he said, they’d all want to join in. Raintree-Hegwer said that his daughter, who is 2, might end up doing something similar if the audience is particularly reserved or nervous.

Helping children overcome their nervousness is part of the show, he said.

“We like to help with that,” Raintree-Hegwer said. “We’re not gonna let them fail.”

Back when his dad ran the show, he said, the purpose was to give children the opportunity for free play in addition to get them out of the house and moving. Now, he said, that concept has evolved with the times.

“The whole idea is that we get kids active, outdoors and interacting with other kids away from screens,” Raintree-Hegwer said. “Show them how fun reality is.”

Want a part in the fun?

Circus Imagination is also hosting a 'clown college' with activities like juggling and hula-hooping until dusk each day.

It’s the first hour of the first day of the fair and most of the games and amusement workers are hanging out, sitting at their booths, waiting…

They take the stage to treat audiences to hard-charging country, R&B or guitar-crunching power ballads. But these are not the likes of Cre…

Caton Raintree-Hegwer, center, of Circus Imagination recruits a pair of youngsters to help with his act on Thursday on Day 2 of the Napa Town & Country Fair.

Brodey Nichols, 6, of Napa plays with a giant bubble at the Napa Town  & Country Fair on Thursday afternoon.