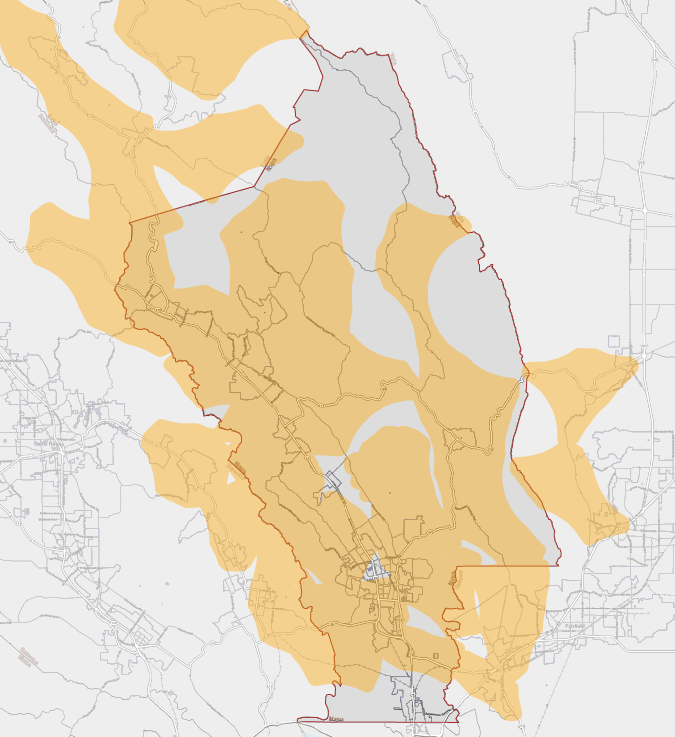 A Pacific Gas and Electric Company map shows areas in Napa County that could be affected by a power shut-off in yellow. 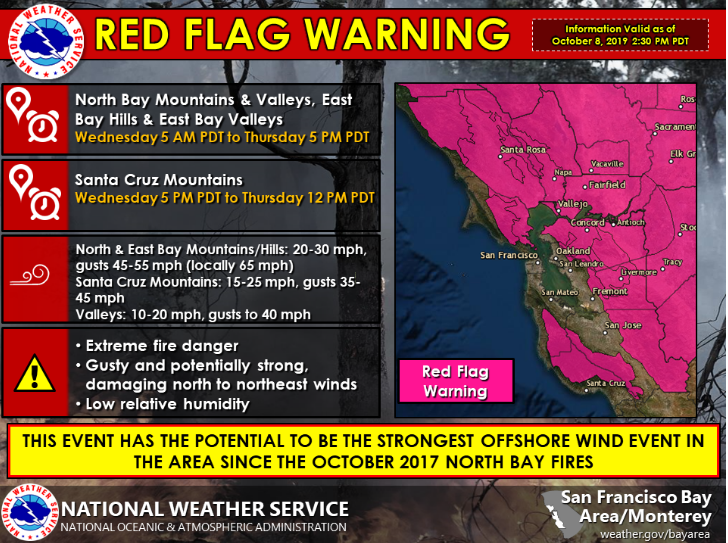 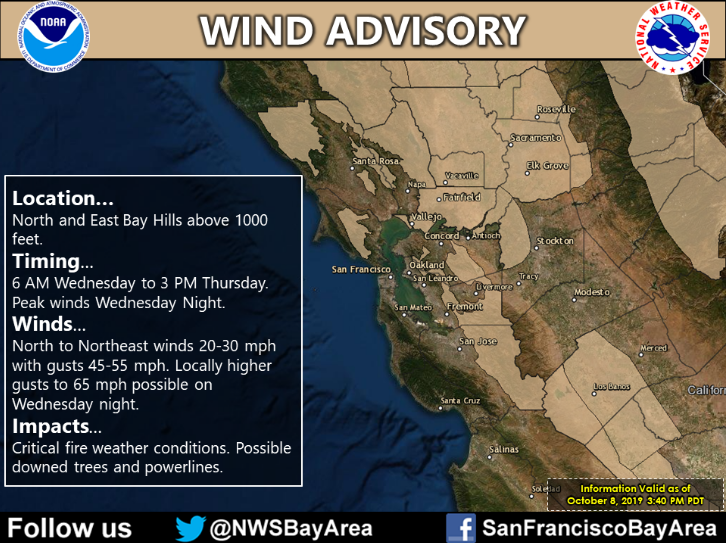 That means seven in 10 residents throughout Napa County could be affected in PG&E’s attempt to mitigate wildfire risk by preemptively shutting off power, by the county’s calculations. Residents can check to see if their address may be affected at pge.com/eventmaps.

Shutoffs — the largest in county history — are expected to begin as early as Wednesday at midnight. The Napa County Office of Emergency Services said Monday afternoon that shutoffs “may extend five days or longer.”

The Napa Valley Unified School District announced to staff Tuesday afternoon that school was cancelled Wednesday and Thursday, as at least nine campuses were expected to be without power. Friday is a previously scheduled district-wide professional development day, with students excused from school.

An air-conditioned PG&E community resource center will be open during daylight hours at the Calistoga Fairgrounds, 1601 N. Oak St., beginning Wednesday at 8 a.m. PG&E is directing residents in the southern part of Napa County to a center at the Six Flags Discovery Kingdom, 1001 Fairgrounds Drive, in Vallejo.

“We’re looking at 75 percent of our residents losing power starting Wednesday morning,” he said. “When they wake up, no power. That’s a significant event. I don’t know how to say it other than that.”

The fortunate thing is the county won’t have to deal with severe heat during a shutoff, with highs predicted to be in high 70s and low 80s over the next few days, Whitney said.

“This is prevention,” Supervisor Alfredo Pedroza said on Tuesday. “This is mitigation. As uncomfortable as we are right now, I believe it’s to prevent what we all remember two years ago. I believe that’s the right mindset to have.”

The National Weather Service forecast a red flag warning — which indicates fire-prone weather conditions — for the North and East Bay hills and valleys from 5 a.m. Wednesday to 5 p.m. Thursday.

The service also issued a wind advisory for North and East Bay hills above 1,000 feet, from 6 a.m. Wednesday to 3 p.m. Thursday. Wind gusts up to 65 mph are possible.

“If we don’t have electrical lines going down, I think that mitigates the risk of fire,” Whitney said. “But that still doesn’t mean fire can’t occur. Fire can occur. It’s just not PG&E lines.”

County Fire Chief Geoff Belyea said local fire officials have put in requests to bring in an outside strike team of fire engines and a bulldozer. Cal Fire, which contracts with Napa County, canceled days off so all personnel will be on duty.

Cal Fire has increased staffing levels statewide in anticipation of red flag warnings across the state, according to a Tuesday morning press release.

Cal Fire’s Sonoma-Lake-Napa Unit said in a press release late Tuesday afternoon that extra crews and command center staff will be available 24/7 in event of a major fire. An extra firefighting helicopter will be based out of Sonoma and another aircraft will fly during nighttime in Northern California to detect any emerging fires.

County Supervisor Brad Wagenknecht noted the fire danger is affecting 30 counties. He wondered how Napa County will get extra fire-fighting resources when everybody else wants the same thing.

“That’s going to be the challenge,” Belyea said. “That’s why we’ve chosen to up-staff our own task force, as well as additional engines.”

Napa Police Department Cpt. Pat Manzer said Tuesday morning that the department was working to ensure it will have extra staff on hand to deal with a potential power outage and any traffic issues at intersections where lights have gone out.

Power outages mean a little extra stress for residents, so additional officers will be patrolling to assist those who need help, he said.

“Without having a real understanding of what it’s going to look like,” he said, “it’s a little bit difficult to really pre-plan.”

The county has activated its Emergency Operations Center at the Napa County Sheriff’s Office near the Napa County Airport. The center will field calls from the public, post maps of affected areas and assist people with medical needs who need power but are affected by the shutoff, said Rattigan of the county.

The Emergency Operations Center links the county to the state Office of Emergency Services, which works with the Federal Emergency Management Agency. Activating the center makes it possible for the county to receive state and federal resources, if necessary, she said.

Residents who have questions about the potential power shutoff are encouraged to avoid calling the non-emergency dispatch line and instead call the county’s bilingual Emergency Operations Center at 707-299-1501. The public may visit readynapacounty.org for updates and preparedness tips.

• Check to see if your address is affected by possible shut-offs at pge.com/eventmaps

• Do you live in a high-fire risk area? Be ready to open your garage door manually if needed, leave electric gates open, make sure vehicles are fueled and backed into the driveway, and have a 'go bag' next to the door

• Don't pull your car over in dry grass

• Target shoot in approved areas with lead ammunition, and never at metal objects

• Check the fuse box to see if there is a blown fuse or tripped circuit breaker. If a fuse or circuit breaker need to be replaced, turn off or unplug all large appliances

Updated at 10 p.m. Monday – As many as 32,000 PG&E customers across Napa County, and more than 600,000 across Northern and Central California, could be affected by Public Safety Power Shutoffs that would begin Wednesday morning and may last several days.

Despite temperatures in the triple digits, Calistogans persevered through PG&E’s first Public Safety Power Shutdown (PSPS) in the North Ba…

Some 17,000 Napa Unified School District students are getting off the rest of the week due to power uncertainty.

California has always prided itself on being a high-tech pioneer. One exception: Power distribution.

A Pacific Gas and Electric Company map shows areas in Napa County that could be affected by a power shut-off in yellow.