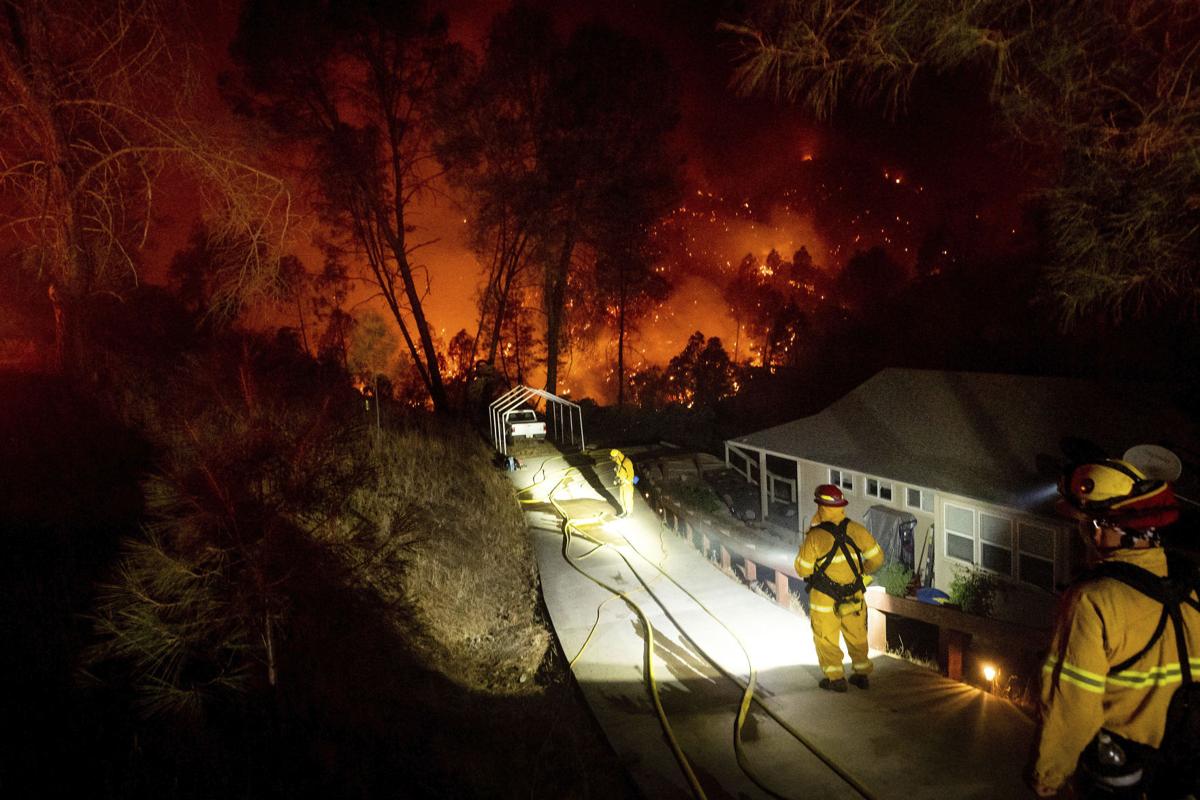 Firefighters protect a home in the Berryessa Estates neighborhood near Lake Berryessa as the LNU Lightning Complex fires burn on Friday. The blaze has forced thousands to flee and destroyed hundreds of homes and other structures. 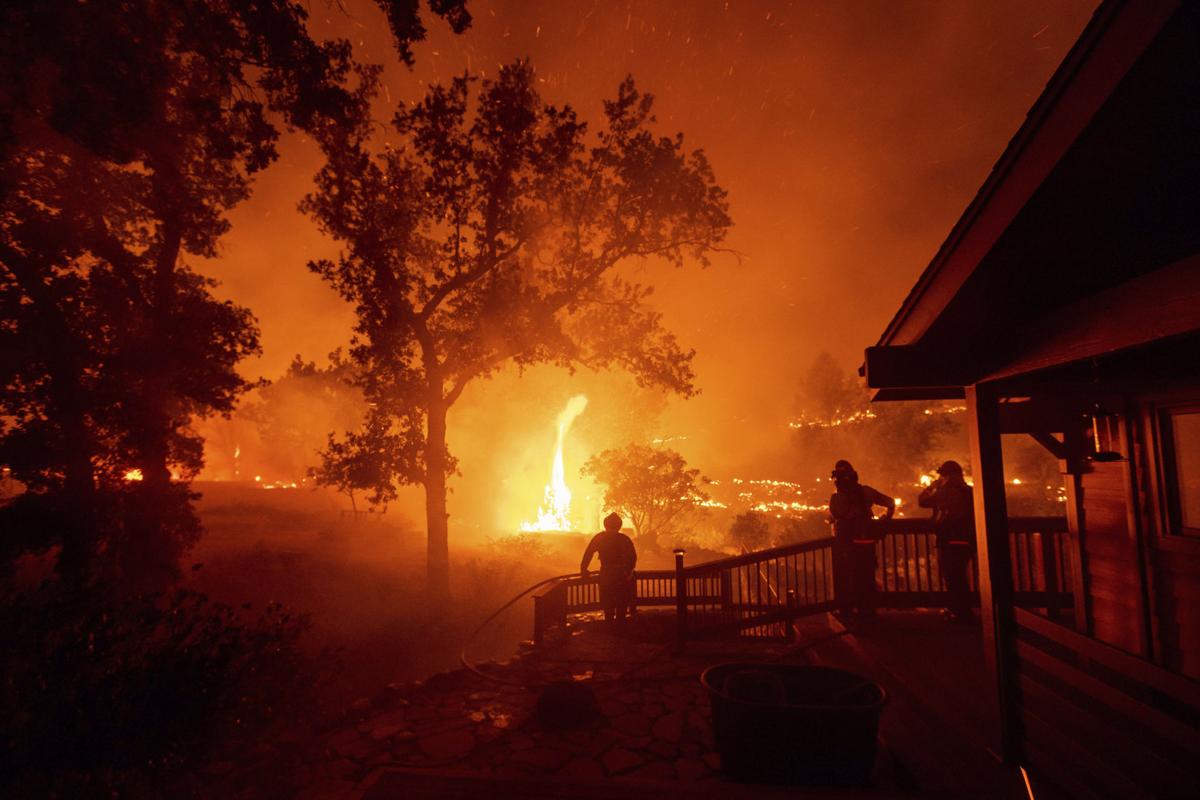 Firefighters watch flames from the LNU Lightning Complex fires approach a home in the Berryessa Estates neighborhood of unincorporated Napa County, Calif., on Friday, Aug. 21, 2020. The blaze forced thousands to flee and destroyed hundreds of homes and other structures. (AP Photo/Noah Berger)

Updated at 8:08 p.m. Saturday – CALISTOGA – Firefighting and weather authorities are warning of a new round of Bay Area lightning storms starting Sunday morning that could further inflame the cluster of wildfires that has scorched swaths of Napa County and the North Bay.

RED FLAG WARNING has been issued for the entire San Francisco Bay Area and Central Coast from 5 am Sunday to 5 pm MONDAY (updated) for Dry Lightning and Gusty Erratic Outflow Winds from Thunderstorms. #cawx #cafire pic.twitter.com/3qo57XlGMd

Meteorologists warned of a fresh wave of the same dry lightning that triggered the LNU Lightning-related Complex of wildfires on Monday, raising concerns of fresh fire outbreaks in the region’s parched woodlands. The complex consisting of fires in Napa and four other counties grew to 325,128 acres by 7:40 p.m. Saturday and were 15 percent contained, Cal Fire reported.

The National Weather Service issued a red flag warning for the entire Bay Area from 5 a.m. Sunday to 5 p.m. Monday, forecasting scattered dry thunderstorms across much of Northern California. Wind gusts may reach 30 to 65 mph in the vicinity of lightning storms.

The unstable weather includes elevated moisture from the remnants of Hurricane Genevieve and is expected to move over the Bay Area through the weekend, the weather service said in announcing the warning. A low-pressure pattern off the Pacific coast may strengthen thunderstorms, allowing some to generate frequent lightning strikes and erratic, strong winds – possibly triggering new wildfires while causing already burning ones to shift unpredictably.

Cal Fire officials issued a news release warning of the potential for fresh fires and continued expansion of existing blazes due to lightning strikes and wind gusts, and said flames are continuing to run in multiple directions toward multiple communities.

Ahead of the lightning warning, smoke from the Northern California wildfires is contributing to the extension of Bay Area air quality warnings into mid-week. The Bay Area Air Quality Management District announced it would extend a Spare the Air alert through Wednesday, citing soot levels unhealthy for people sensitive to air pollution.

A list of areas under evacuation orders and warnings, as well as where evacuees can go and other information about the LNU Lightning Complex fires, is available from Cal Fire at fire.ca.gov/incidents.

More than 12,000 lightning strikes have been reported across California since Aug. 15, and 585 wildfires have been recorded since, Cal Fire Division Chief Jeremy Rahn reported during a press conference Saturday at the Napa County Fairgrounds in Calistoga.

During the half-hour briefing, Cal Fire officials cautioned North Bay residents to make themselves ready for a sudden elevation in fire danger.

“All of our resources remain stretched to a capacity we have not seen in recent years,” Unit Chief Shana Jones said of the possibility of lightning and winds complicating the fire battle. “... You have to evacuate when told to do so; you have to help us help you. Please be prepared – this fire is extremely dynamic.”

As of Saturday morning, there were 194 fire engines, 35 water tenders, 11 helicopters, 13 hand crews, and 36 bulldozers assigned to the LNU Fire Complex, according to Cal Fire Chief Sean Kavanaugh. Total personnel count has increased to 1,349, as Cal Fire has designated the North Bay fires the top priority among hundreds that are burning across the Golden State and stretching resources, Kavanaugh said Saturday in Calistoga.

While relatively temperate wind and heat allowed fire crews to make progress against the North Bay fires on Friday, Kavanaugh warned that fresh fires are likely with the arrival of lightning and that residents should be read to head to safer ground if necessary.

“It’s going to be our job to get on those fires: identify them and get the resources out to those incidents so we don’t get large fires breaking out,” he said. “We ask of the public that when you get those (evacuation) orders, please adhere to those orders. Please be ready to go; if you have time right now, we ask people to prepare their homes, prepare their livestock, prepare their animals, prepare for their families to leave their homes safely.”

The combined size of the fires burning in Napa, Sonoma, Solano, Lake and Yolo counties makes the complex the second largest in California history, behind only the Mendocino Complex fires that burned more than 459,000 acres in 2018, according to Cal Fire.

Four people have died in the fires, three from Napa County and one from Solano County. Four others have been injured.

The blazes have destroyed 845 structures and damaged 231 others, while another 30,500 structures remain threatened, Cal Fire reported Saturday evening.

The Hennessey Fire, the largest in the complex, includes several merged fires in Napa and Lake counties and had burned 271,714 acres with 17% containment late Saturday.

Evacuation orders remain in effect for many of the eastern Napa County woodlands including the Lake Berryessa, Angwin, Deer Park and Pope Valley areas.

The Walbridge Fire in Sonoma County, which merged with the Stewarts Fire, has burned more than 51,069 acres with zero containment late Saturday, Cal Fire said.

Statewide, there have been 585 fires over the last week — many sparked by thousands of lightning strikes — that have burned nearly a million acres, or 1,562 square miles, according to Cal Fire.

The move by the Federal Emergency Management Agency covers 75 percent of the cost of “emergency work and the repair or replacement of disaster-damaged facilities,” with California and local governments covering the balance, Thompson said in a statement.

Also approved was individual assistance for those needing to repair, rebuild or replace housing lost to the fires, as well as help with other disaster-related expenses.

Editor’s Note: Because of the public safety implications of the wildfires, we are providing access to this article free of charge. To support local journalism, please visit https://napavalleyregister.com/members/join/ and consider becoming a member.

As of Friday afternoon, the City of Calistoga is not under immediate threat and no evacuation notices are anticipated for any portion of Calistoga within the city limits.

More resources have been sent to fight the Napa area fires which grew only modestly Thursday night.

The Bay Area Air Quality Management District has extended a Spare the Air smog warning through Wednesday due to smoke from a cluster of major wildfires in the North Bay region.

Letter: Calistoga's Anne Pentland says we must pay attention and do the things necessary to fight climate change.

People displaced from their homes have until Saturday to apply.

An evacuated family says thanks to St. Helena

Letter: The Dahline Family says thanks to St. Helena for their generosity during the recent evacuations and wildfires.

Firefighters protect a home in the Berryessa Estates neighborhood near Lake Berryessa as the LNU Lightning Complex fires burn on Friday. The blaze has forced thousands to flee and destroyed hundreds of homes and other structures.

Firefighters watch flames from the LNU Lightning Complex fires approach a home in the Berryessa Estates neighborhood of unincorporated Napa County, Calif., on Friday, Aug. 21, 2020. The blaze forced thousands to flee and destroyed hundreds of homes and other structures. (AP Photo/Noah Berger)