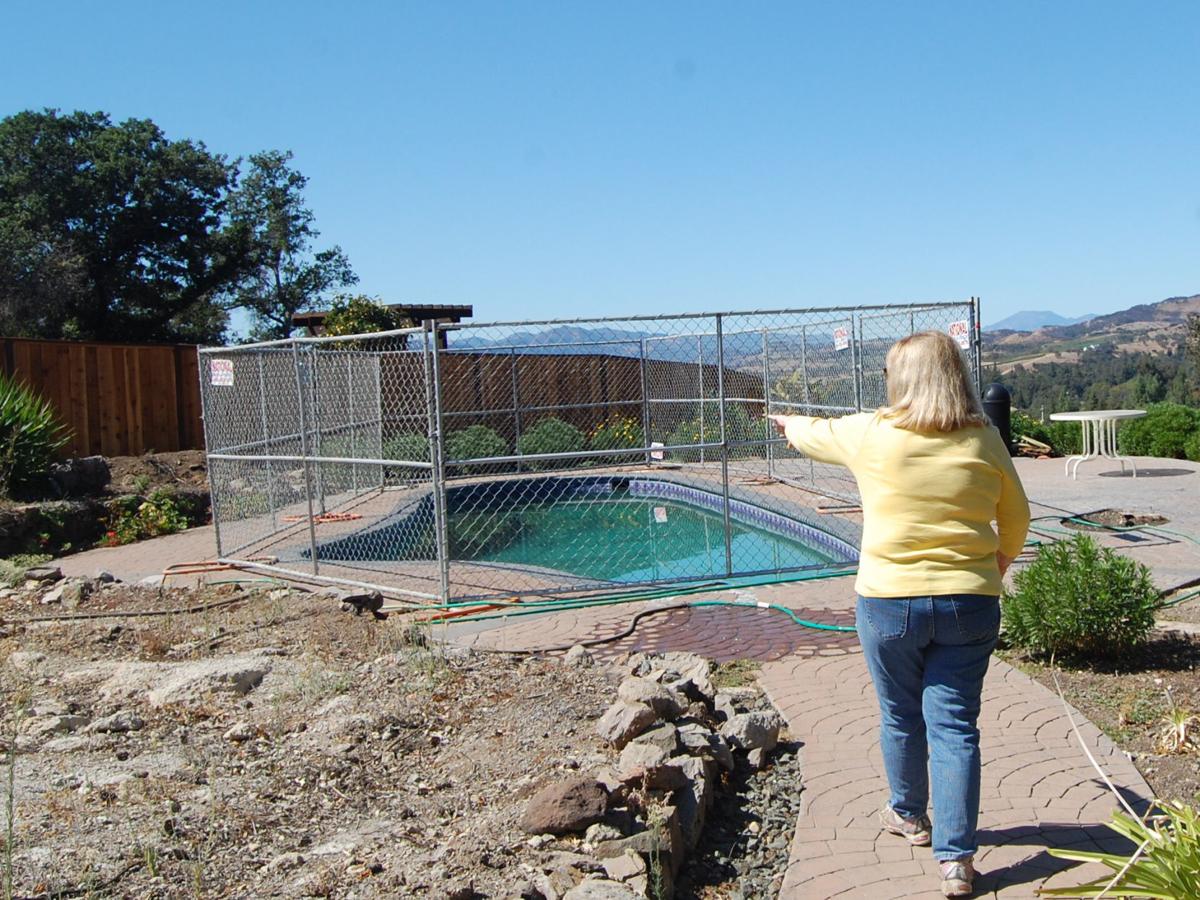 Georgene Larsen on the site of her Monticello Road home destroyed in the 2017 Atlas fire. The swimming pool remains. The Larsens are hoping a PG&E lawsuit will provide them with money they need to rebuild. 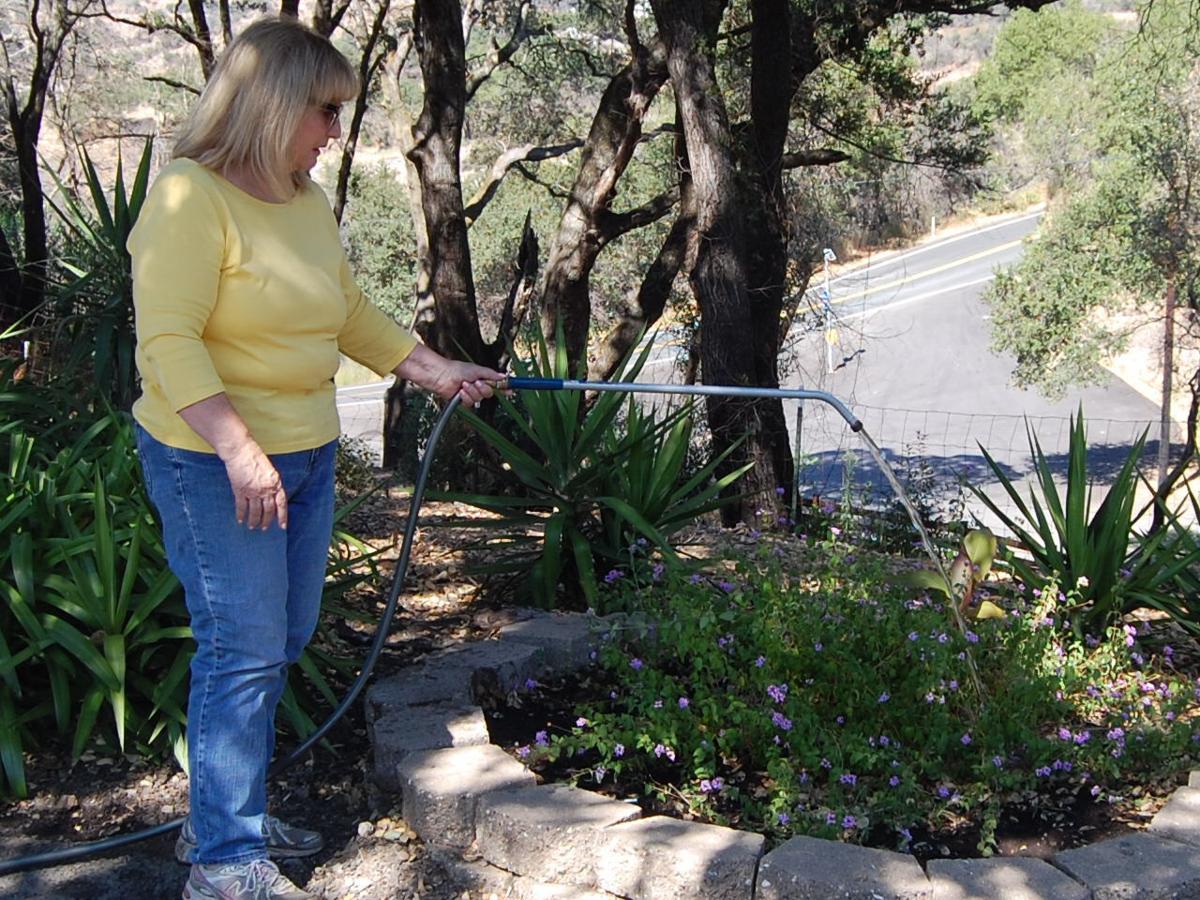 Georgene Larsen goes to the site of her Montcello Road home lost to the October 2017 fires several times a week to water plants. Some survived the fire and others the Larsens have since planted. The Larsens don't know when they will be financially able to rebuild. 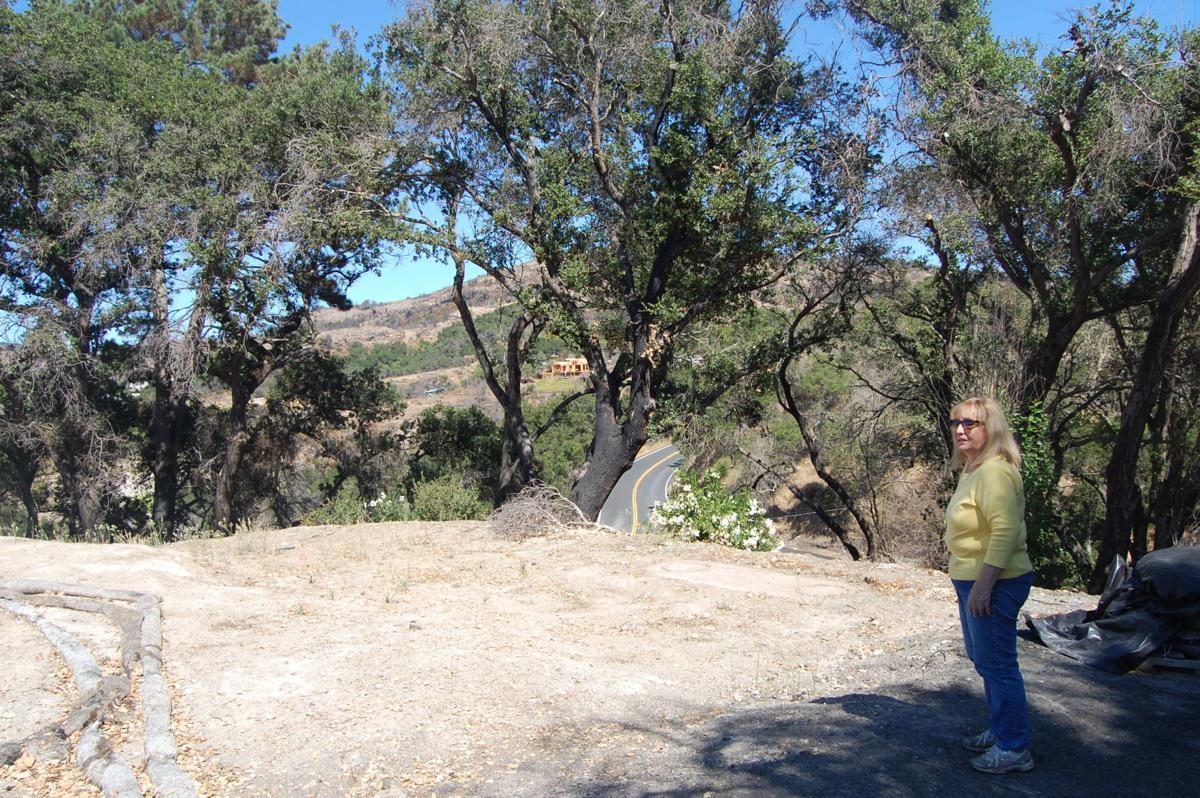 Georgene Larsen and her husband Ib Larsen hope to rebuild their Monticello Road home lost to the October 2017 Atlas fire.

For some residents, Napa County’s apocalyptic fires of two years ago cast a smoky pall on their lives today.

The Atlas, Partrick/Nuns and Tubbs fires ignited in different areas during the hot, windy night of Oct. 8, 2017. Napa Valley for days seemed trapped by a flaming noose threatening to draw tight.

When the smoke cleared, 655 rural houses were gone, from rustic cabins to luxurious Silverado homes. Napa County had suffered one of its worst disasters since becoming a California county in 1850.

The Atlas fire continues to blacken Georgene Larsen’s life. She and her husband, Ib Larsen, lost their Monticello Road home and have yet to rebuild – or learn if they’ll be able to rebuild.

“It wipes you off the face of the earth, except standing,” Georgene Larsen said.

The Larsens are not alone. As of late September, the county reported it had issued rebuild permits for 190 of the homes lost in the October 2017 fires, or 29 percent. Thirty-two homes – 5 percent—had been rebuilt.

County Planning, Building and Environmental Services Director David Morrison said the rebuild is going somewhat slower than he had expected, but there are reasons.

“Many of the homes being built in Napa have private driveways, wells, and septic systems, which make rebuilding more complicated,” Morrison said. “Further contributing to the challenge of rebuilding has been the slow pace of insurance companies settling claims with the victims.”

Meanwhile, the Larsens are dealing with their own set of circumstances, both financial and emotional.

“Right now, if I smell smoke, like the winds that have blown the last couple days, I react,” Georgene Larsen said. “It’s a trigger. Its a fight or flight feeling. It’s like PTSD from this.”

Georgene Larsen grew up in Napa and in 1974 became an entry-level clerk for the Napa County courts. She retired in 2005 as assistant court executive officer. Her life was anchored at the Monticello Road house that she and Ib Larsen bought in 1994 and remodeled into their dream home.

The nightmare of Oct. 8, 2017 began when the Larsens lost electricity at about 10 p.m. Georgene Larsen looked outside and saw the eastern hills ablaze about 1.5 miles away. She thought the wind would carry flames in another direction.

Then came a 2 a.m. Oct. 9 wake-up call from sirens. With a red glow nearby, a sheriff’s deputy told the Larsens they had 2 minutes to evacuate. The Larsens fled, driving through thick smoke on Monticello Road to a friend’s house for the night.

Ib Larsen drove back up Monticello Road after sunrise, with flames along the road and no law enforcement stopping him. Much of the Altas fire had moved to the south.

He arrived to find the house in flames. The house next door survived, but the Larsens’ house ended up as smoldering rubble.

Life became a series of moves for the Larsens. They stayed at friends’ homes, they slept in their car, they stayed at a motel. They now live a rental life in Coombsville, inside a rented home where not even the sheets on the bed are their own.

They want to create at least an echo of life they once lived. But their new insurance policy somehow left them underinsured, with the art studio, carport, wine cellar and garage not included. They found this out after the fire.

An estimate for rebuilding came in at $1.6 million and the insurance company is paying $600,000, Georgene Larsen said.

What’s left is legal action against PG&E, given that Cal Fire blamed the Atlas fire on fallen PG&E lines. Georgene Larsen said their ability to rebuild depends on getting money from the utility. They are in limbo because of the PG&E bankruptcy case.

“I think what really changes you is the little things that never used to bother you,” she said. “Little things, little issues, little problems, they become big problems because of the stress of dealing with loss.”

She has frequent shakes that she blames on the stress. Her husband sleeps only for about three hours a night after dealing with lawyers and insurance officials, Georgene Larsen said.

Gone is the house that her husband remodeled into what Georgene Larsen called a work of art. Gone are remembrances of her courthouse career, such as a barrister desk, a law chamber chair, old law books. Gone is the artwork created by Ib Larsen – things that are irreplaceable.

Georgene Larsen is left starting from scratch at age 69.

But there is the constant reminder of the life they once lived. The Monticello Road site is still part of the Larsens’ routine.

“The painful part is going up here every other day to water the plants and take care of the property, whatever’s left,” Georgene Larsen said.

Laura Schermeister had a different experience with the fire that affected her in a different way. Ever since October 2017, she has stayed away from a beloved place in her life – The Cove camp near the peak of Mount Veeder in the Mayacamas Mountains west of the city of Napa.

Schermeister married her husband Rob at The Cove in July 2017. They lived nearby in a rented Mount Veeder cabin and were starting their wine tasting studio in Glen Ellen in adjacent Sonoma County for their Schermeister Winery.

“We were just a couple of kids following a dream,” Laura Schermeister said with a laugh.

Fires burned in the Mayacamas Mountains on Oct. 9, 2017. The Schermeisters lost electricity at their cabin at 3 a.m. They also faced a near-blackout of information, having to rely on their car radio.

“We were up there in a little cabin with no internet,” Laura Schermeister said. “So you can imagine.”

Their parents told them to leave and they did, taking only a few items such as their computer and wedding clothes because they assumed they would soon return.

The Nuns fire eventually included the Partrick, Adobe, Pythian and Norrborn fires. That fire burned especially hot on the slopes of Mount Veeder, destroying the Schermeister cabin and reducing the densely forested The Cove to blackened tree trunks.

As they monitored the daily Cal Fire online burn maps, the Schermeisters saw much of their lives might be going up in smoke.

“Looking at the burn maps, we just got married, we’d have to completely start over,” Laura Schermeister said.

The Schermeisters found another Mount Veeder home to rent, one in an area hit less hard by the fire. They had become attached to this forested area with wild turkeys, mountain lions and other wildlife, Laura Schermeister said.

“I just couldn’t imagine not living up there,” she said.

Why return to an area where another wildfire is always a possibility?

“Every time the day is warm and a breeze comes through, I used to love it and now I dread it ... but there is a specialness of living on Mount Veeder that only people who have lived up there can explain,” she said.

Meanwhile, The Cove has had burned trees by the hundreds cut down and hauled away to the lumber mill. Volunteers have planted seedlings for Douglas firs, oaks, maples and bays in hopes of creating the forest of the future. For now, the look is somewhat barren.

Laura Schermeister can’t bear to return to the site of her wedding and look, even though it is only a few miles along a winding road from her new home.

“I would like to go back,” she said. “I would also like to remember it the way it was on our wedding day, with shade and dappled light and dragonflies flying around ... it’s like seeing someone after they die. You don’t really want to remember them that way.”

The “magical” place in the woods she remembers is gone. Still, she said that efforts being put forth by the owners—the Napa County Regional Park and Open Space District—toward the rebirth of The Cove have given her a degree of closure.

Recovering after the fires: Calistoga couple learns to be prepared

Erica and Wade Ramey were newlyweds when the Tubbs fire destroyed the home they shared with Erica’s dad in October 2017. Along with the house,…

On the slopes of Mount Veeder, ready to spring to life, is a newly planted forest-in-waiting to replace the one that burned to a crisp in the …

Rebuilding after the 2017 Napa County fires is slowly gaining momentum, but most lots still sit empty.

Trying to dig its way out of bankruptcy, PG&E Corp. is likely to take another financial hit as the California Public Utilities Commission …

PG&E is taking Calistoga vineyard owner Terry Gard to court, to seize a portion of his land for a liquid natural gas plant.

Faced with power outages, Napa wineries do their resourceful best

California has always prided itself on being a high-tech pioneer. One exception: Power distribution.

A new fund has been created to help victims of the Tubbs Fire wildfire victims still on the road to recovery.

Georgene Larsen on the site of her Monticello Road home destroyed in the 2017 Atlas fire. The swimming pool remains. The Larsens are hoping a PG&E lawsuit will provide them with money they need to rebuild.

Georgene Larsen goes to the site of her Montcello Road home lost to the October 2017 fires several times a week to water plants. Some survived the fire and others the Larsens have since planted. The Larsens don't know when they will be financially able to rebuild.

Georgene Larsen and her husband Ib Larsen hope to rebuild their Monticello Road home lost to the October 2017 Atlas fire.