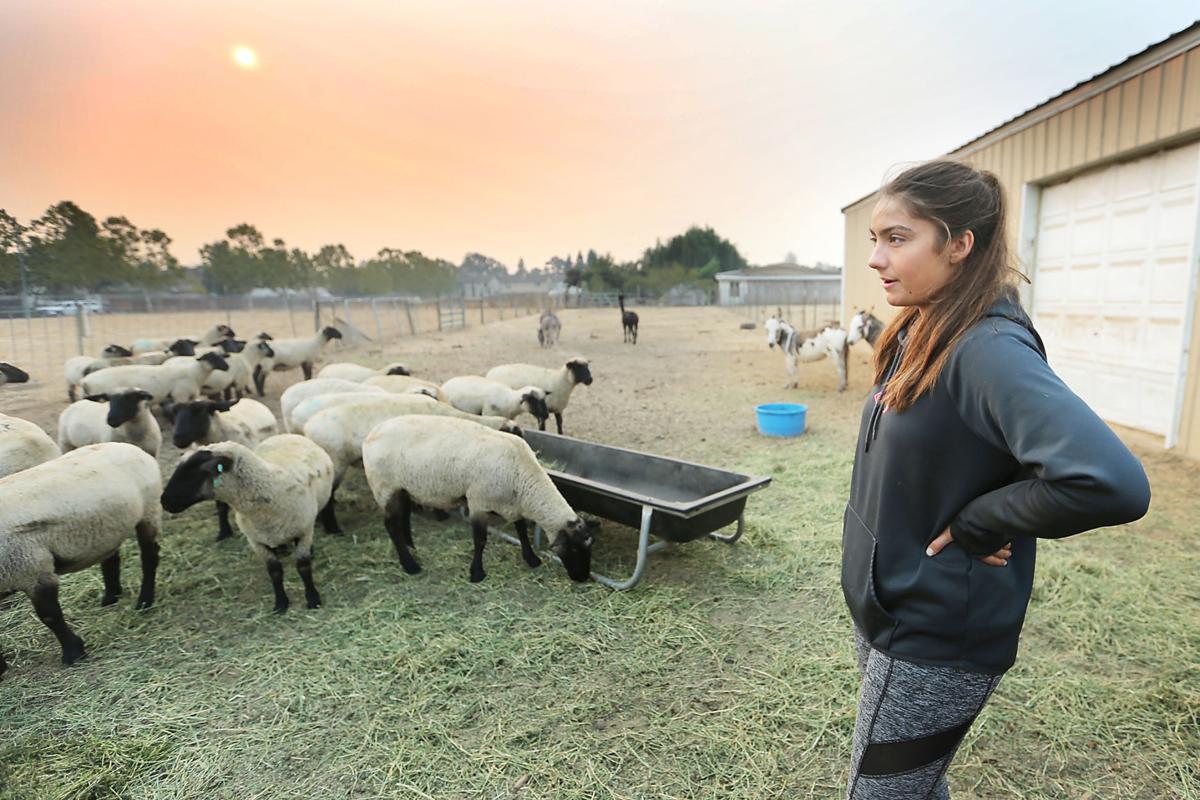 Under a smoke-tinged sky, Vintage High School student Aubrianna Domecus stands amid some of the 200 animals that have been evacuated to the Vintage Farm as a result of Napa County fires. 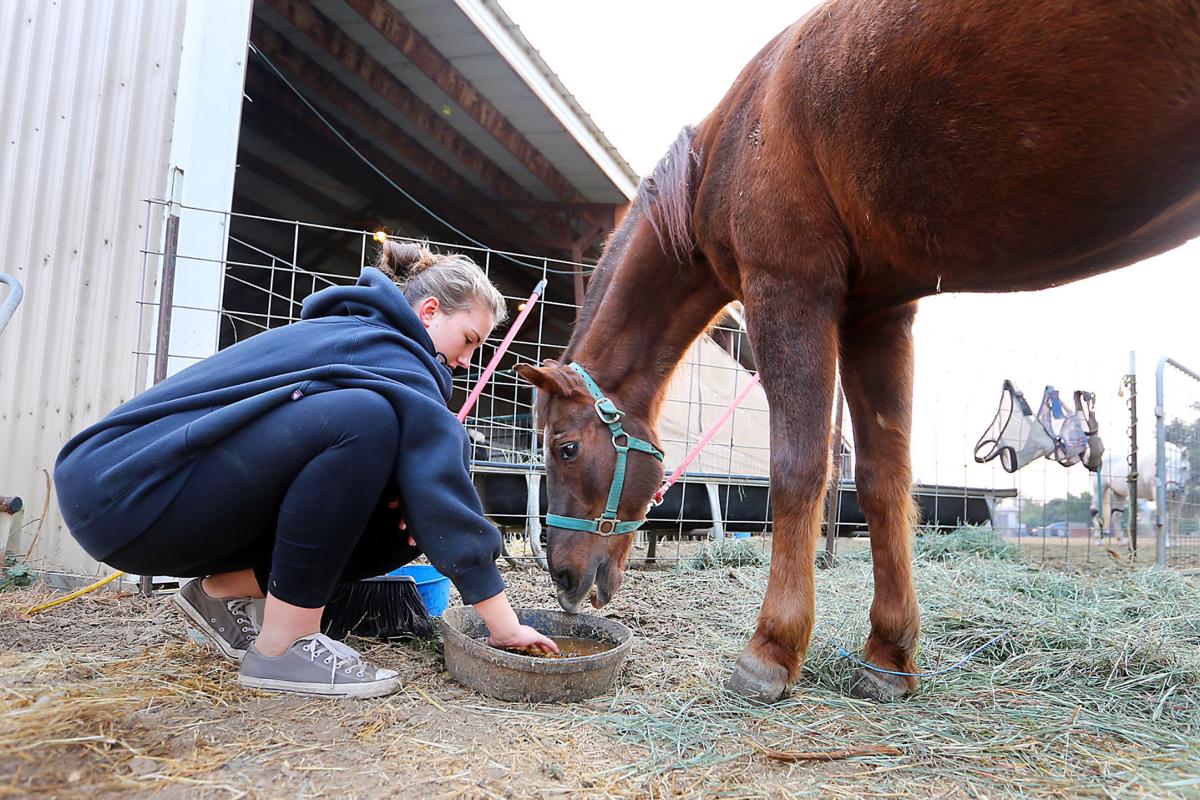 Vintage High School student Elizabeth Wilson feeds a horse at the Vintage Farm on Wednesday morning. The farm and Napa FFA have taken in about 200 domestic animals from areas evacuated during the Napa County wildfires. 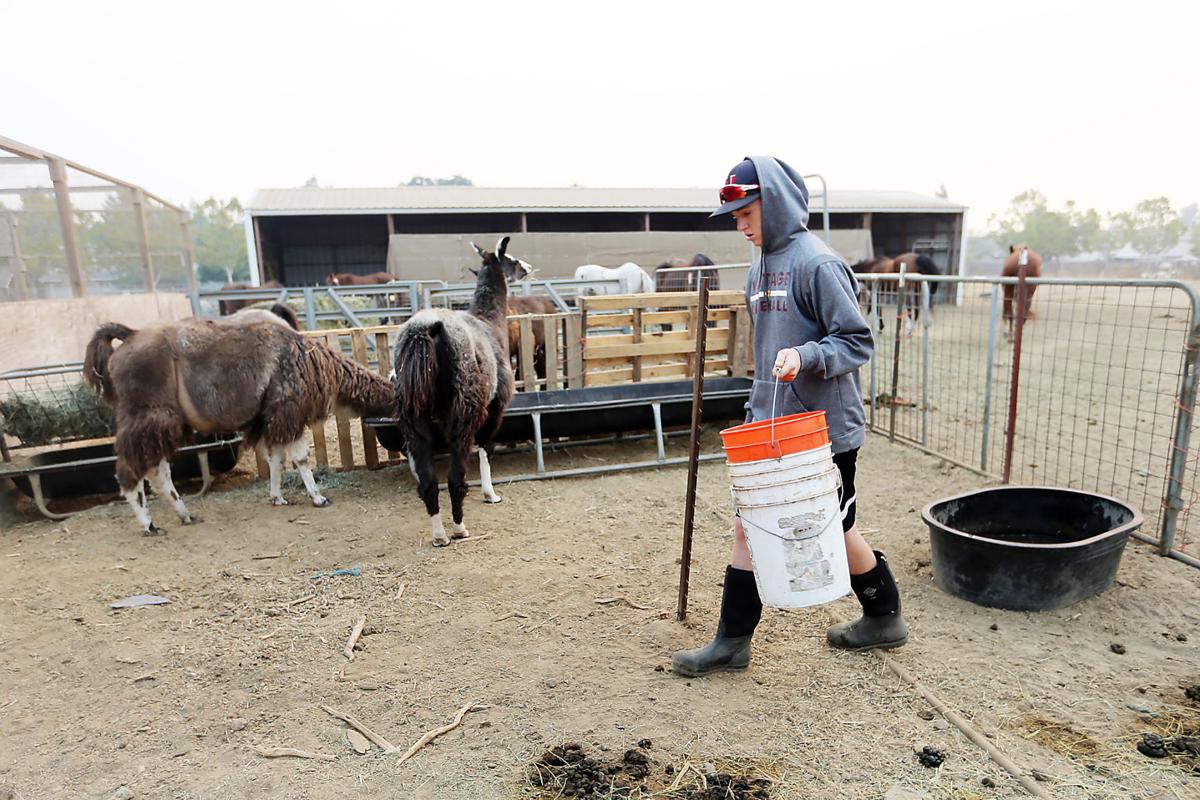 Vintage High School student Stephen Cole tends to his llamas at the Vintage Farm on Wednesday morning. His animals were part of the nearly 200 that were evacuated to the farm as a result of Napa County fires.

At a 10-acre small farm in north Napa, Vintage High School students learn the skills of animal husbandry. But in the days since wildfires began consuming swaths of the North Bay, those same teenagers – and their instructor – have become doers rather than learners, taking in livestock and pets and sometimes helping to drive them away from danger themselves.

Wednesday afternoon at Vintage Farm, dogs snatched from outside Atlas Peak homes menaced by flames were the temporary residents of the wooden turkey pens. Another pen was filled with 10 goats trucked in that same morning from St. Helena. And pipe fences, nets and improvisation had created space for dozens of horses that had arrived at the farm at the end of Sierra Avenue – often in a pickup truck and trailer driven by Vintage’s agriculture teacher, Emmalee Casillas – from every fire-skirted corner of the county.

Various pastures, farms and ranges have come under increasing threat by the blazes that have overwhelmed tens of thousands of rural acres in Napa and Sonoma counties, leaving residents scrambling to find refuge for livestock and pets as well as themselves. In response, Vintage Farm has become a combination of an emergency shelter and a donation stop, where those studying with Casillas spend hours looking after more than 150 animals and taking in gifts of hay, feed and supplies – with the surplus going to other farms in need.

The work began less than an hour after the first fires were reported Sunday night.

“We started getting calls at 11, so I did a Facebook post saying we were open, recalled Casillas. “We went out and evacuated our first set of horses around 11:30. We weren’t just taking animals in at the farm; we were actively evacuating them with a truck and trailer.”

Five of her students who received texts from their teacher soon joined her at the school farm, and despite the chaos of the fires’ rapid spread, their tasks soon became clear.

“It was more like, ‘Let’s start with the basics – get water in every pen we’ve got here and get out the trail, and let’s go from there,’” he said of the early hours for the first five student helpers, who with Casillas labored for nearly 24 hours without a break, deep into Monday night.

Cole, like his schoolmates, has kept busy with a variety of duties, from taking the names of animals and their owners’ phone numbers to feeding and watering the farm’s dozens of four-footed or winged houseguests. He has caught two-hour naps at the family home when possible; otherwise his car has been his bed, while other volunteers have brought air mattresses into farm buildings to sleep.

“I got seven hours of sleep, total, in the first 70 hours,” added Casillas. “I’ve actually been having to make the kids go home; they’re probably pulling eight to 10 hours each on average.”

On the fly, Vintage students have shifted animals and pens to fit the new arrivals among the resident ewes, hens, sheep and goats that are the subject of more than 30 school projects a year. By Tuesday night, at least 150 more creatures had arrived, including at least 60 horses as well as dogs, cats, parrots, llamas, goats and pigs, according to Casillas.

As owners have trucked in livestock, fowl and pets, the Vintage Farm volunteers also have taken their services to the road, including the retrieval of at least two dozen horses from around Napa County. Their eagerness to help has been blunted only by the roadblocks that have literally barred them and others from the zones of greatest danger.

Widespread outages of wireless phone and Internet systems added to the anxiety. “Whenever Emmalee was out in the truck, it was just a matter of waiting and hoping she and her truck hadn’t exploded yet,” Wilson said.

One of the first animal owners to be aided by the Vintage students has repaid them by pitching in herself. Joining the teens amid the pens and yards was Karen Kaiser, who had horses rescued from land near McKinley Road and the Silverado Trail in the fire’s early hours.

“My horses probably would be dead if they didn’t help me,” she said Wednesday. “So now I’m trying to help others in turn.”

Surplus supplies will be given to other establishments sheltering animals during the fires.

Visitors can pull into the farm driveway at the stub end of Sierra Avenue. Volunteers can be contacted through the Napa FFA chapter on Facebook, at facebook.com/napaffa/

Napa firefighters prepare to save dogs and cats with new equipment

When firefighters pull a family pet out of a fire, the dog or cat is usually passed out from smoke inhalation. To get oxygen to them, crews us…

It was another relaxing session of cold-laser therapy for Mickey and his injured legs, as 21st-century medicine came to the aid of an animal t…

Under a smoke-tinged sky, Vintage High School student Aubrianna Domecus stands amid some of the 200 animals that have been evacuated to the Vintage Farm as a result of Napa County fires.

Vintage High School student Elizabeth Wilson feeds a horse at the Vintage Farm on Wednesday morning. The farm and Napa FFA have taken in about 200 domestic animals from areas evacuated during the Napa County wildfires.

Vintage High School student Stephen Cole tends to his llamas at the Vintage Farm on Wednesday morning. His animals were part of the nearly 200 that were evacuated to the farm as a result of Napa County fires.