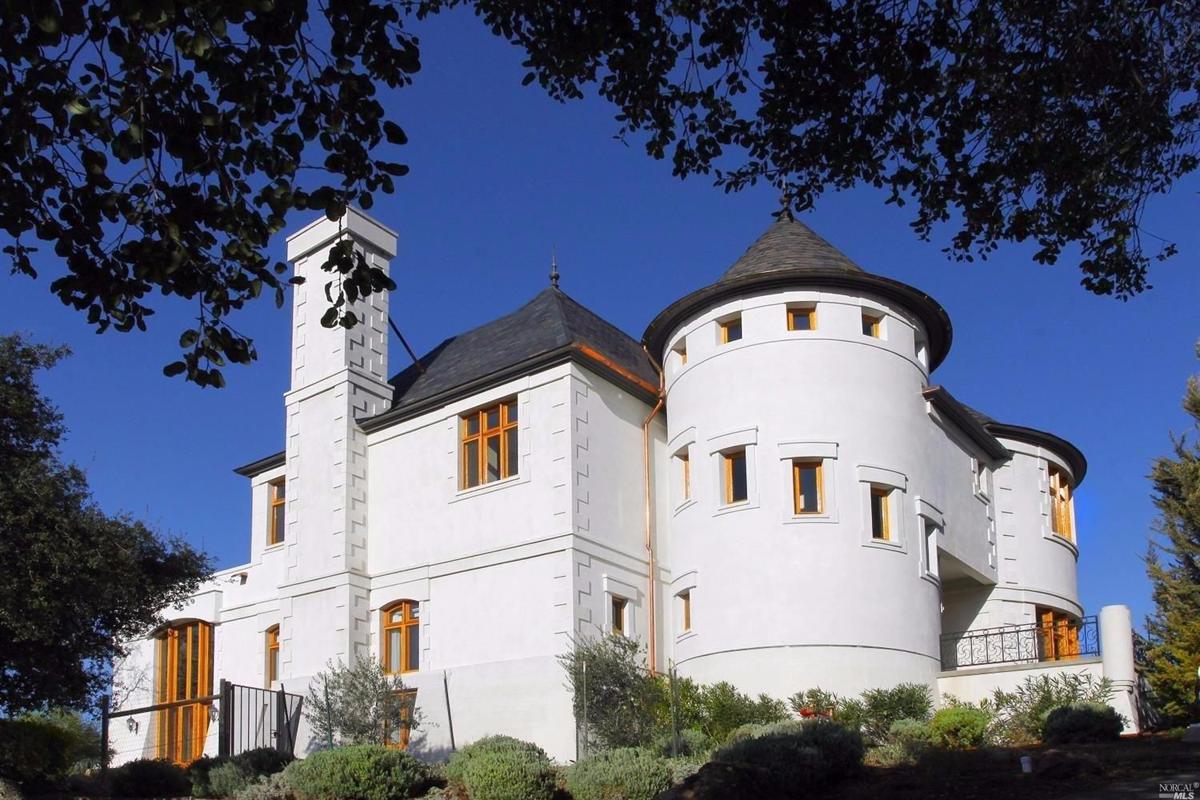 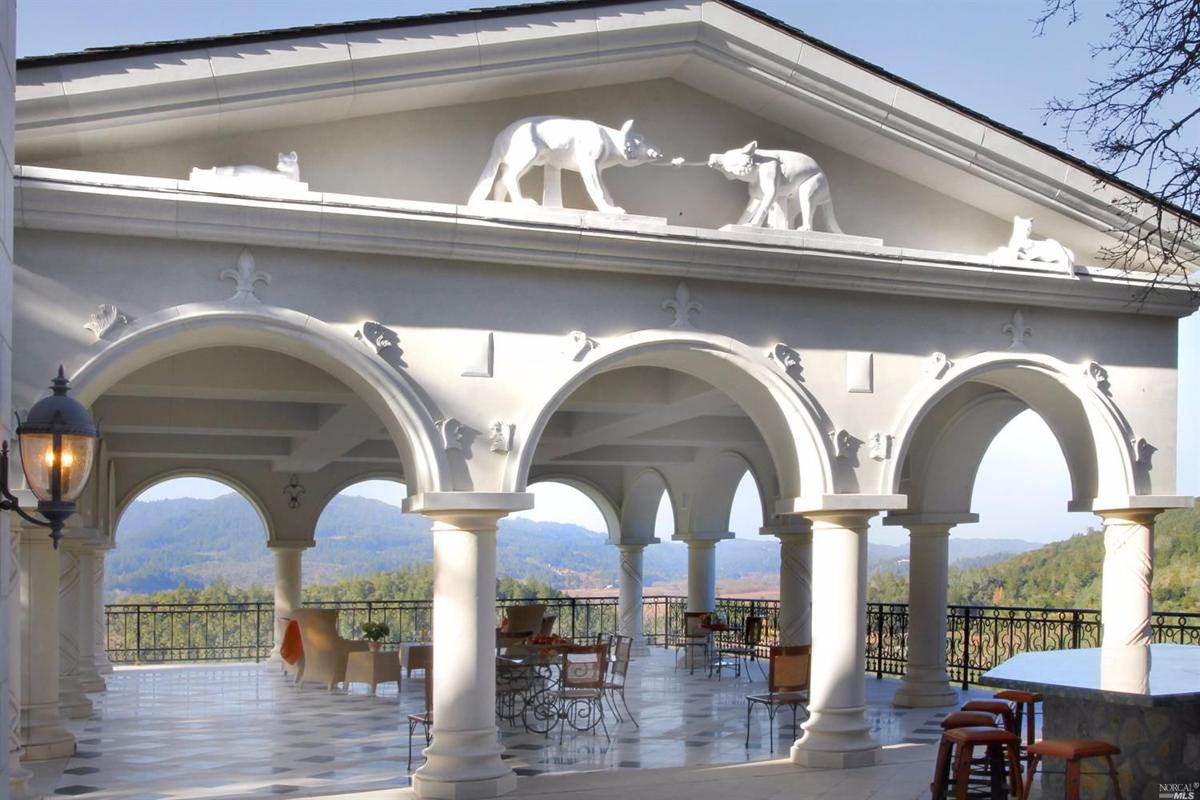 An outdoor pavilion at Chateau Galatea. 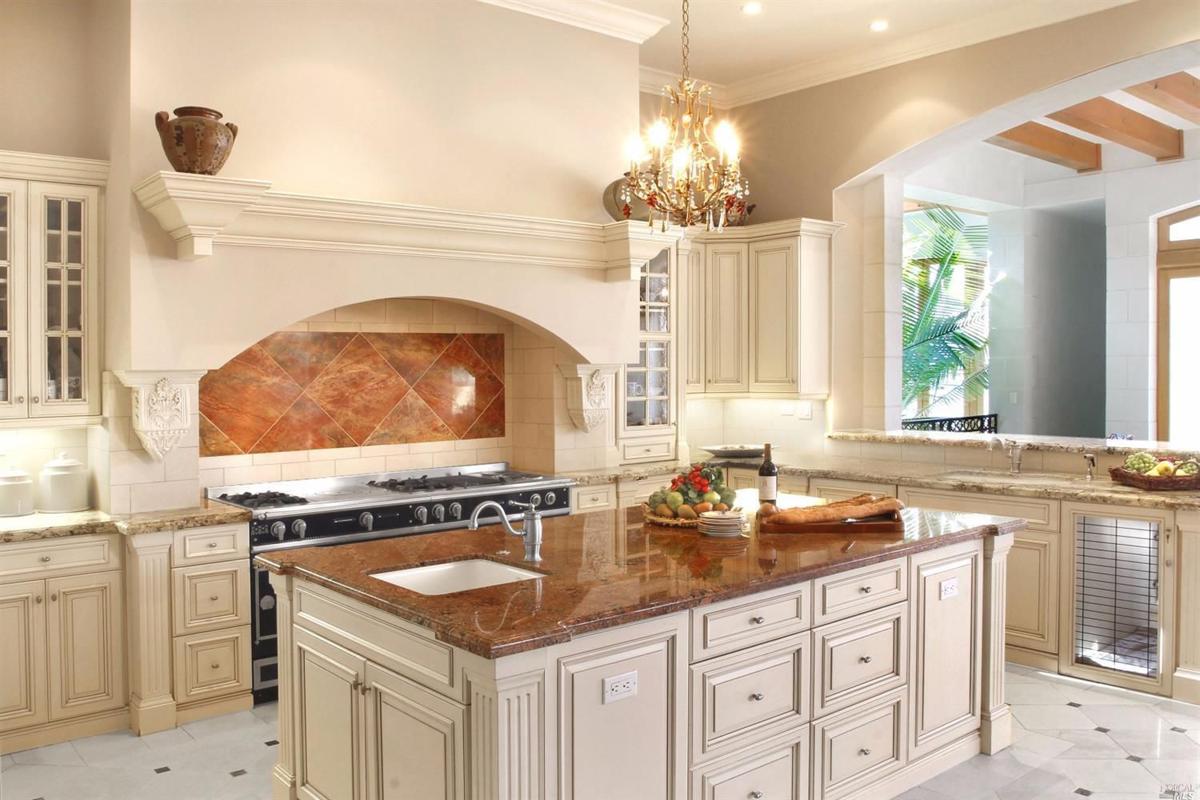 The kitchen at Chateau Galatea. 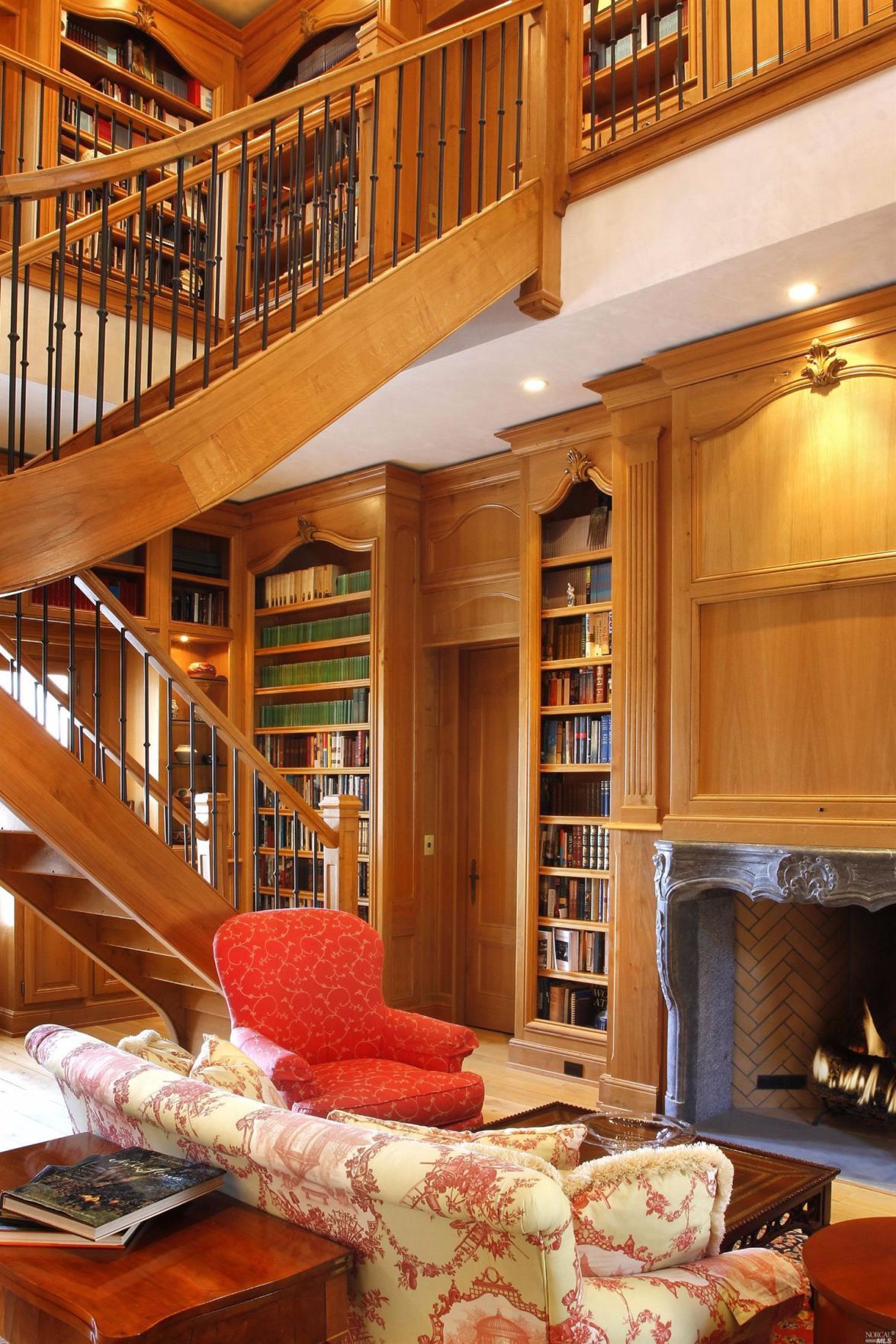 A two-story library at Chateau Galatea. 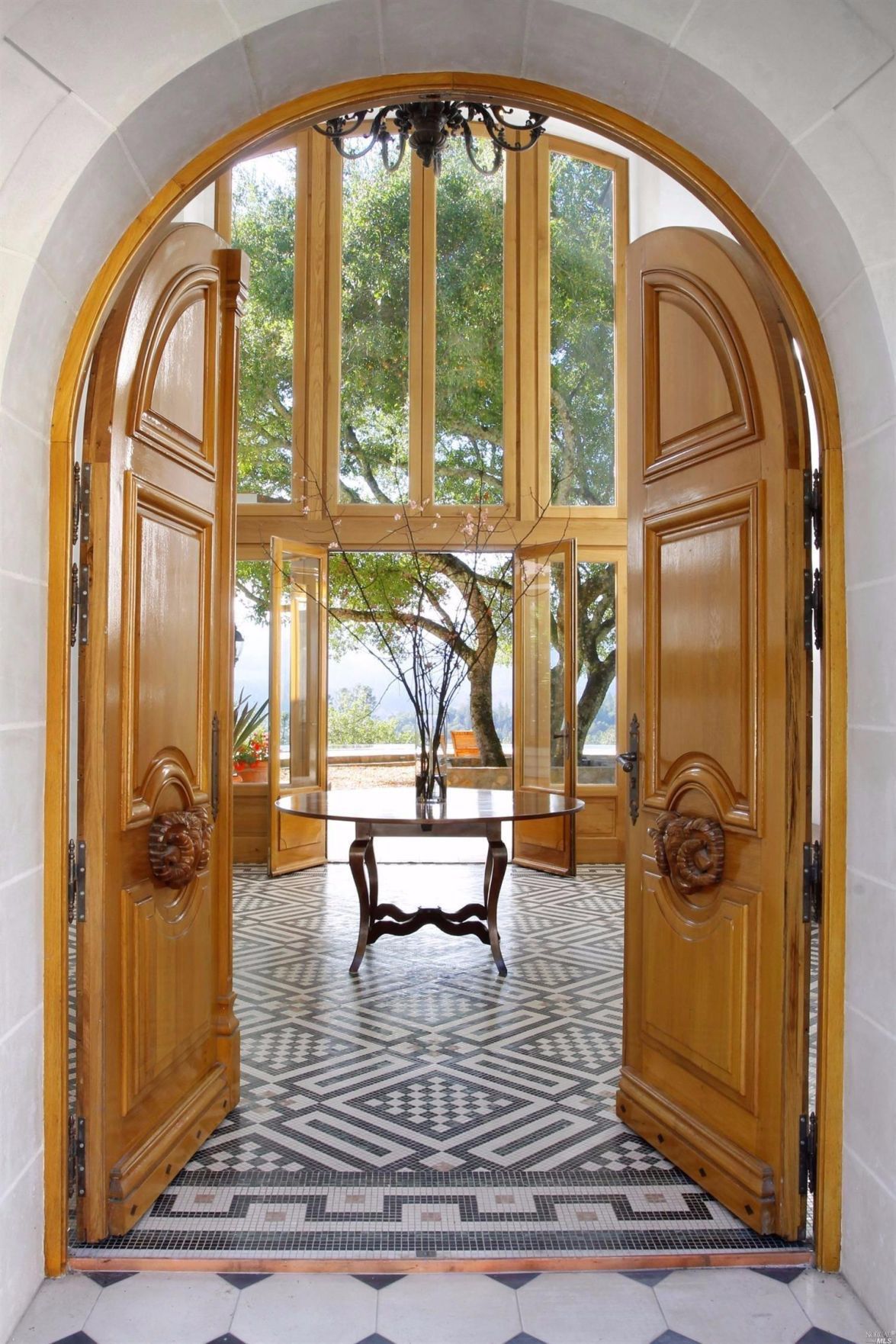 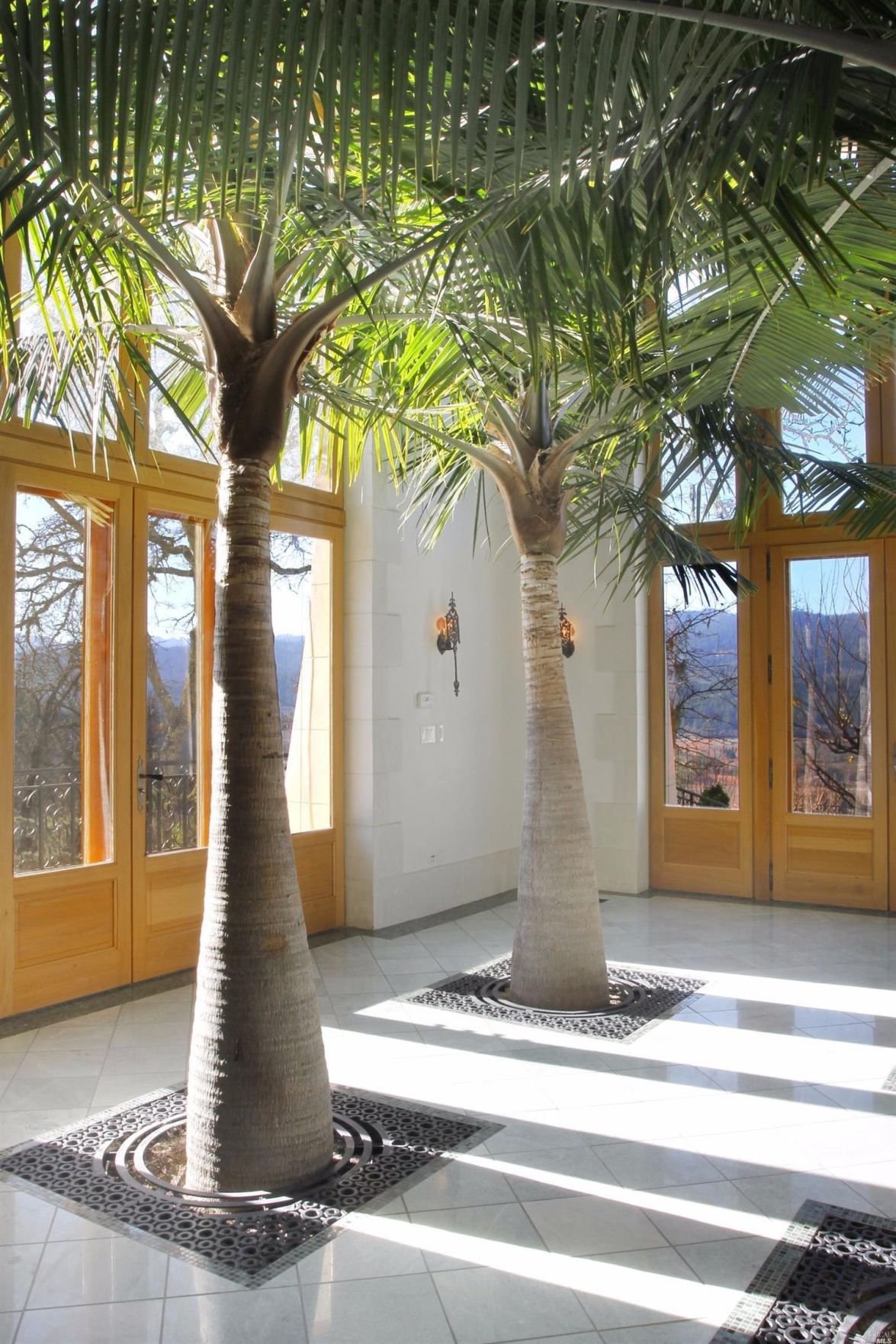 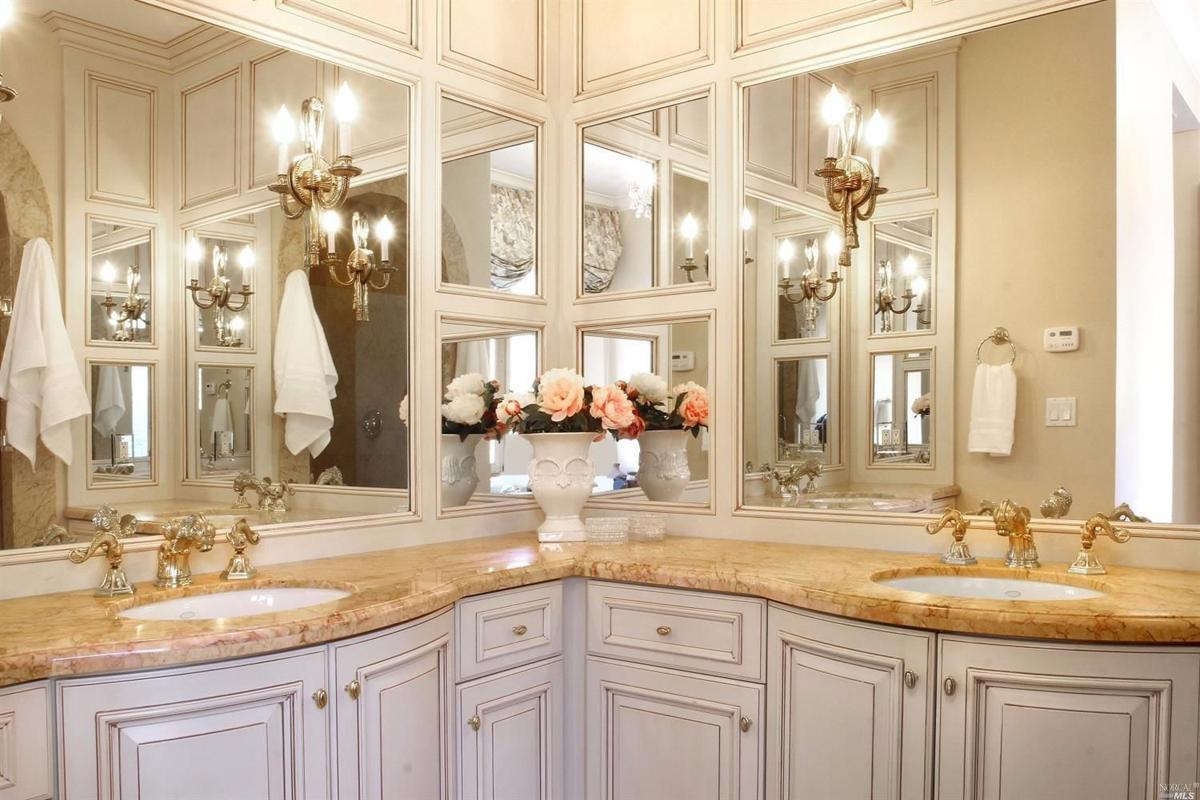 One bathroom at Chateau Galatea. The estate is for sale for $13.2 million.

Looking for a new home?

“The house is amazing,” said listing agent Cheri Stanley of Sotheby’s International Realty. With its panoramic views, “you feel like you’re on top of the world.”

Chateau Galatea was recently put back on the market after a 2014 listing for $16.9 million failed to generate a buyer.

For those lucky enough to be able to afford such an estate, it wouldn’t take long to review the number of luxury homes available for sale in Napa County. As of last week an estimated eight luxury homes priced above $10 million were offered on the Multiple Listing Service, said Stanley.

Chris Wunderlich, chairman of the the North Bay Association of Realtors Napa chapter, noted that in the past six months only one Napa County residential estate sold for more than $10 million. That estate, located at 1095 State Lane in Yountville, sold for $10.2 million, he said.

“That’s normal for Napa County,” he said. According to recently recorded sale data, such luxury homes can take anywhere from four months to more than 14 months to sell. “I don’t see that pattern changing drastically” in the near future, he said.

Chateau Galatea is owned by Tom and Eileen Pollock, who live there full-time. Tom Pollock, who works as an attorney, said the hillside location was a key factor in the design of the home.

“We were inspired to build a structure that is as visually stunning as the views it overlooks,” he said.

Chateaux architecture is classic and beautiful, he said. “They never go out of style. And they are a perfect fit for wine country landscape and living.”

The estate was inspired after chateaux of the Loire Valley region of France, he noted.

All of the doors, windows, library cabinetry, stone fireplaces and staircases of the Louis XII-style castle were imported from France.

The main home, finished in 2003, is 8,261 square feet and features four bedrooms and six bathrooms.

The chateau’s name comes from the ancient Greek myth of Pygmalion and Galatea.

“Galatea was the statue so beautiful that its sculptor Pygmalion fell in love with her and asked the gods to turn her from stone to human,” said Pollock.

When asked about the library, Pollock admitted he and his wife are voracious readers.

“Eileen had never forgotten the two-story library in the movie ‘My Fair Lady’ and given a chance to custom-build a home, she asked that we incorporate that type of library. Also, some studies show that households with books are a leading factor in boosting a child’s education,” he said.

“Maybe we went overboard with the number of books but we did adopt a teenager from Colombia with little education and no English, and six years later he entered college in the U.S.,” said Pollock.

The conservatory was inspired by the winter garden atrium in the Brookfield Place office complex in Manhattan, said Pollock.

“As former New Yorkers, we once worked in the area when the complex was still called Winter Garden and it was one of the most beautiful spots in the city,” he wrote.

When asked why the family wanted to sell the home, Pollock said, “We always like to challenge ourselves. Transferring the chateau’s ownership to another family will enable us to explore another opportunity for creating a new home.” The family plans to remain in Napa Valley, he said.

The French chateau design “is definitely a different architectural style than you typically see” in the area, Stanley noted.

Stanley said that she and co-listing agent Barry Berkowitz have already had some interest in Chateau Galatea, including potential buyers from Silicon Valley and Beverly Hills. One inquirer was Russian, she said.

Because the home’s design is so specific, the next owner “has to be somebody who really has an appreciation for that French chateau” style.

That buyer “is most likely going to come from outside the Valley or even outside the country,” she predicted.

Stanley said because the stock market has been performing well, that means good things for the Napa Valley luxury home market. “I have a feeling that people are looking to park some money in real estate. I think it will be a decent year.”

Cyd Greer of Coldwell Banker Brokers of the Valley is another local realtor who specializes in selling luxury properties, wineries and vineyards.

Greer also has a French-style home that is about to be relisted. Named Notre Jardin, it is located at 1799 Oakville Grade in Oakville and is priced at $18 million.

Greer said that she’s seeing more interest in showing Napa County estates priced at $10 million and above, along with some offers as well.

The one thing such buyers usually have in common is varying levels of interest in participating in the wine business at some level.

“Some of them would just like to have a vineyard and grow their own grapes and do a very small wine program. Others are interested in something more significant. That’s why some are coming here instead of say Aspen or other vacation destinations,” said Greer.

For the most part, for these very high end buyers such a home is a discretionary purchase.

“These are not buyers that have to buy. They want to find exactly the home and location they are looking for,” said Greer.

It can take up to two years to sell such homes, Greer said. “It’s not unusual,” she said. “The buyer is looking for that very specific fit.”

“A lot of these people are incredibly wealthy,” said Wunderlich. “Someone willing to spend over $10 million, they might not buy something on the market.” Such a buyer might prefer land or a home to tear down and start from scratch.

“A lot of people might want to build it themselves,” said Wunderlich.

Memories of a grand property

This is a true story in response to the March 25 article, “Live like a King in the Napa Valley,” featuring a chateau with stunning valley view…

Look at me now! Former cooperage and chicken ranch now a luxury estate for sale for $5.2 million

A former chicken ranch, then cooperage, has been remodeled into a luxury St. Helena estate, one that could be yours for $5.195 million.

An outdoor pavilion at Chateau Galatea.

The kitchen at Chateau Galatea.

A two-story library at Chateau Galatea.

One bathroom at Chateau Galatea. The estate is for sale for $13.2 million.