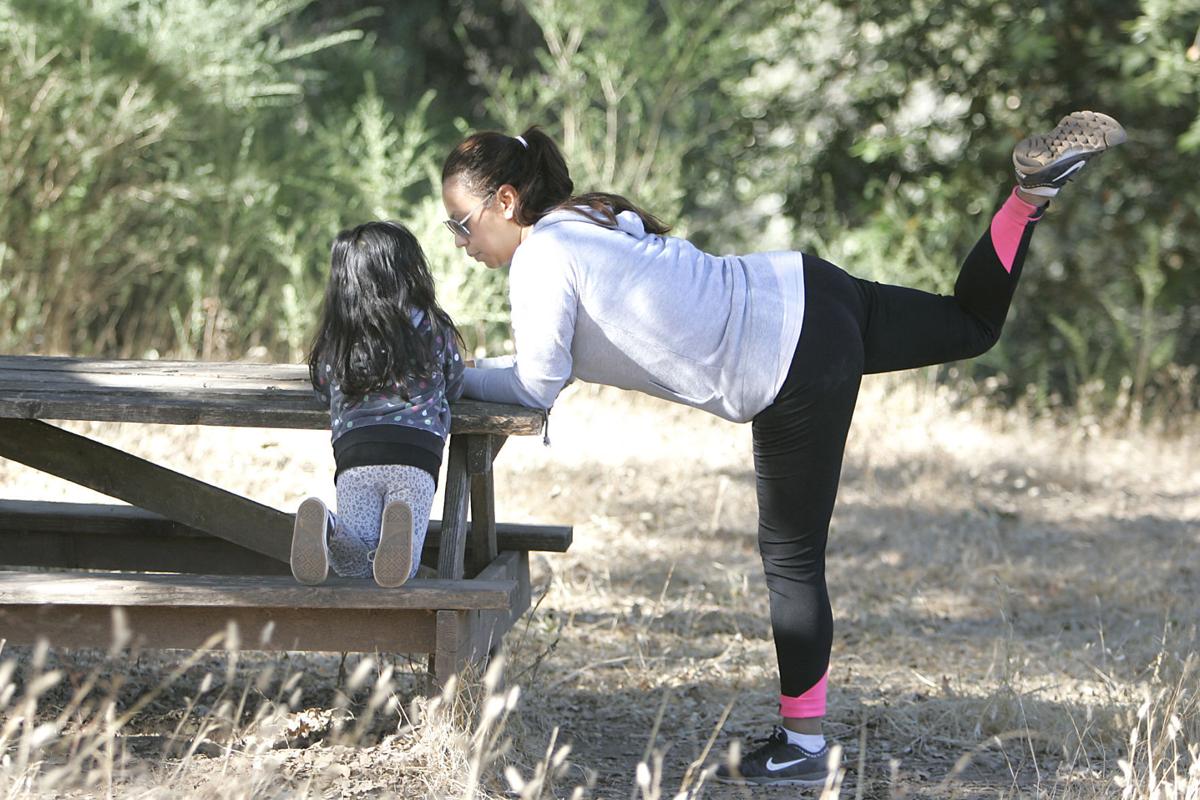 Geovana Fuentes of Napa stretches during a hike at Westwood Hills Park with her daughter, Andrea Sierra. She says they’re at the park at least three times a week. Westwood Hills, which opened 40 years ago, was the city of Napa’s first natural park. 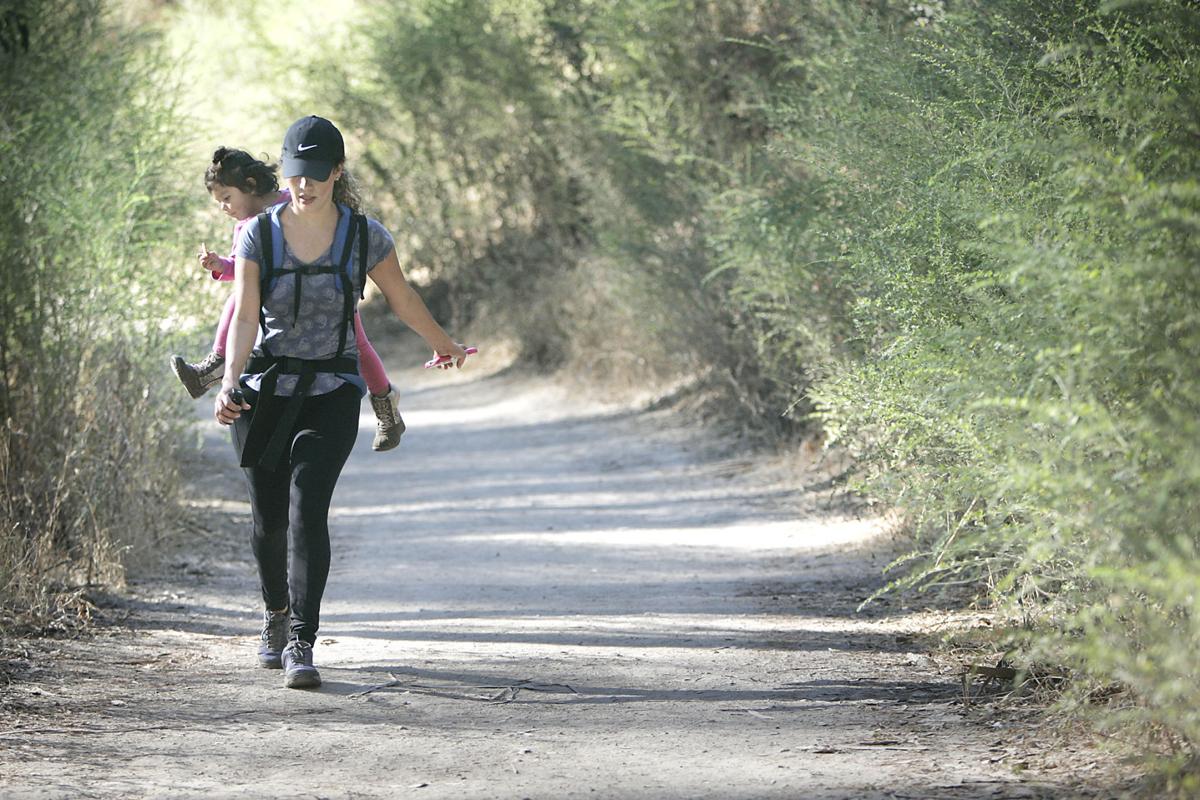 Elisa Fernandez walks a trail while carrying her daughter, Angely at Westwood Hills Park. Fernandez says she has been hiking regularly at the park for 15 years. 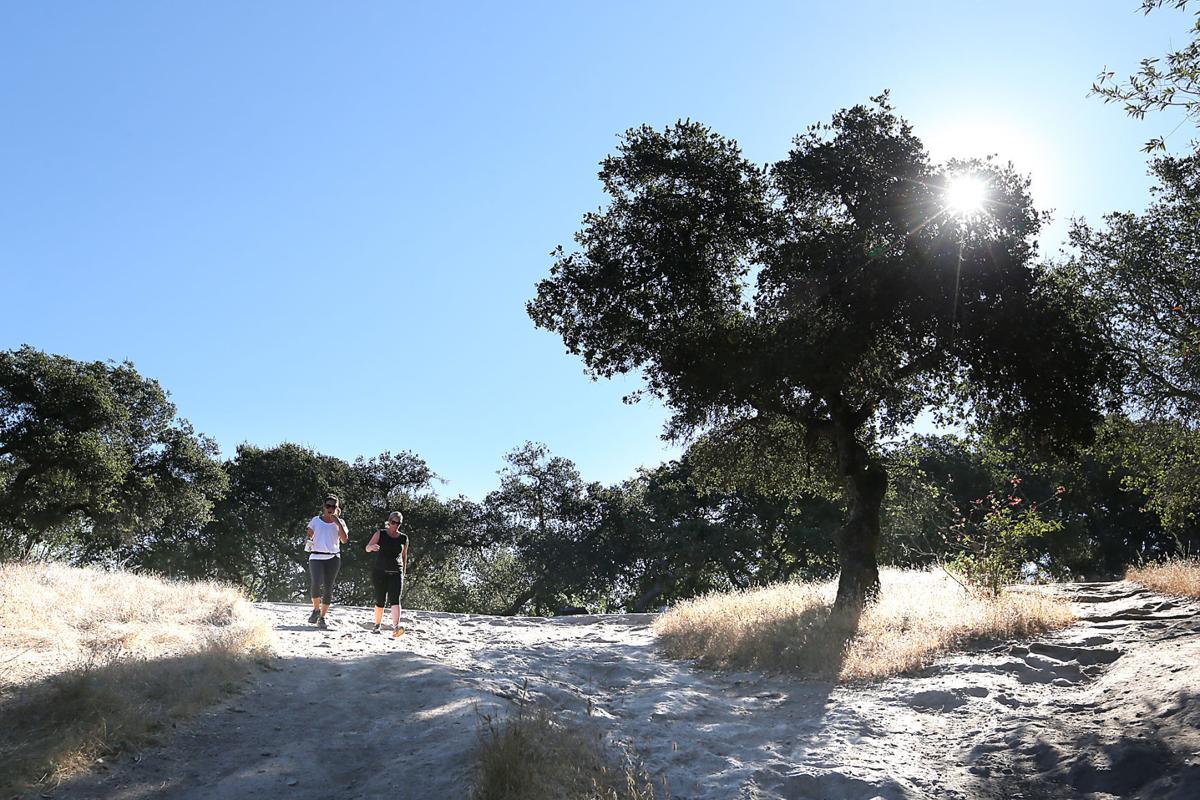 Napans Mary La Monica, left, and Nikki Grimshaw hike a trail at Westwood Hills Park. The pair says they hike the park, which opened 40 years ago as the city of Napa's first natural park, a few times a week. 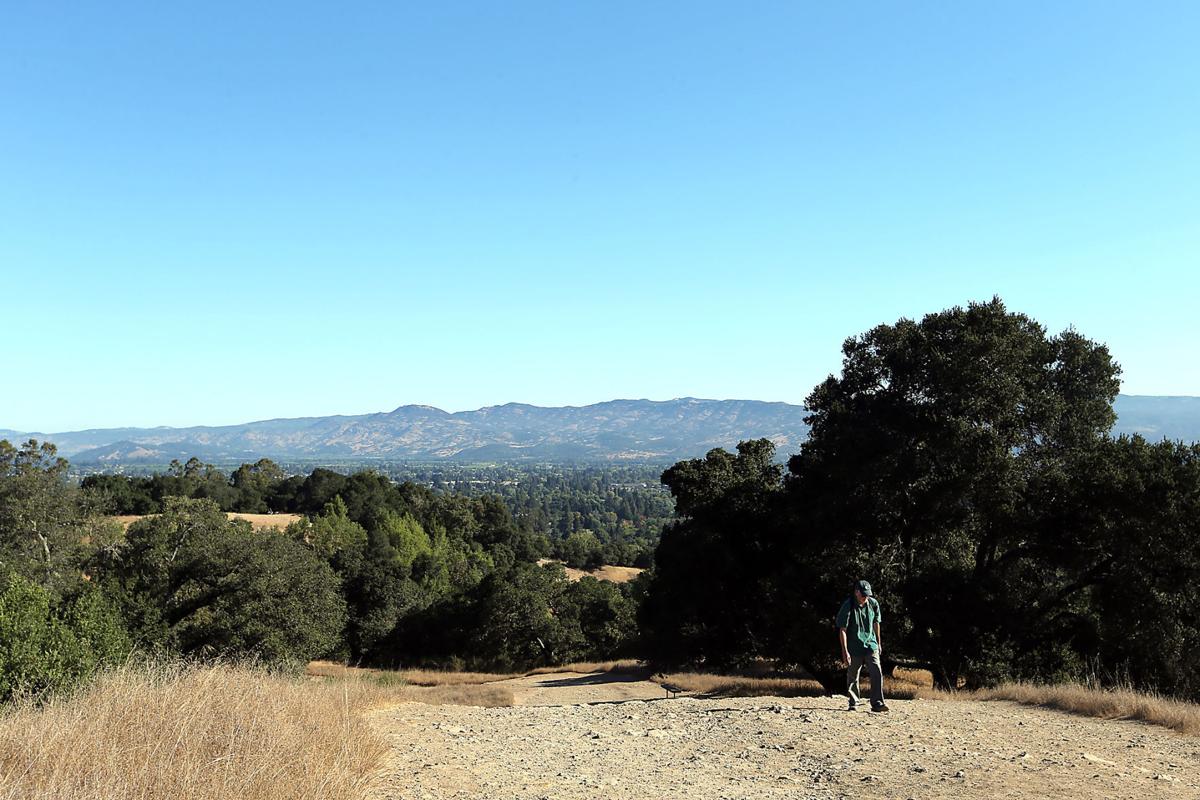 Fred Hansen of Napa, who says he hikes at Westwood Hills Park at least three times a week, makes his way along a trail on a weekday morning. 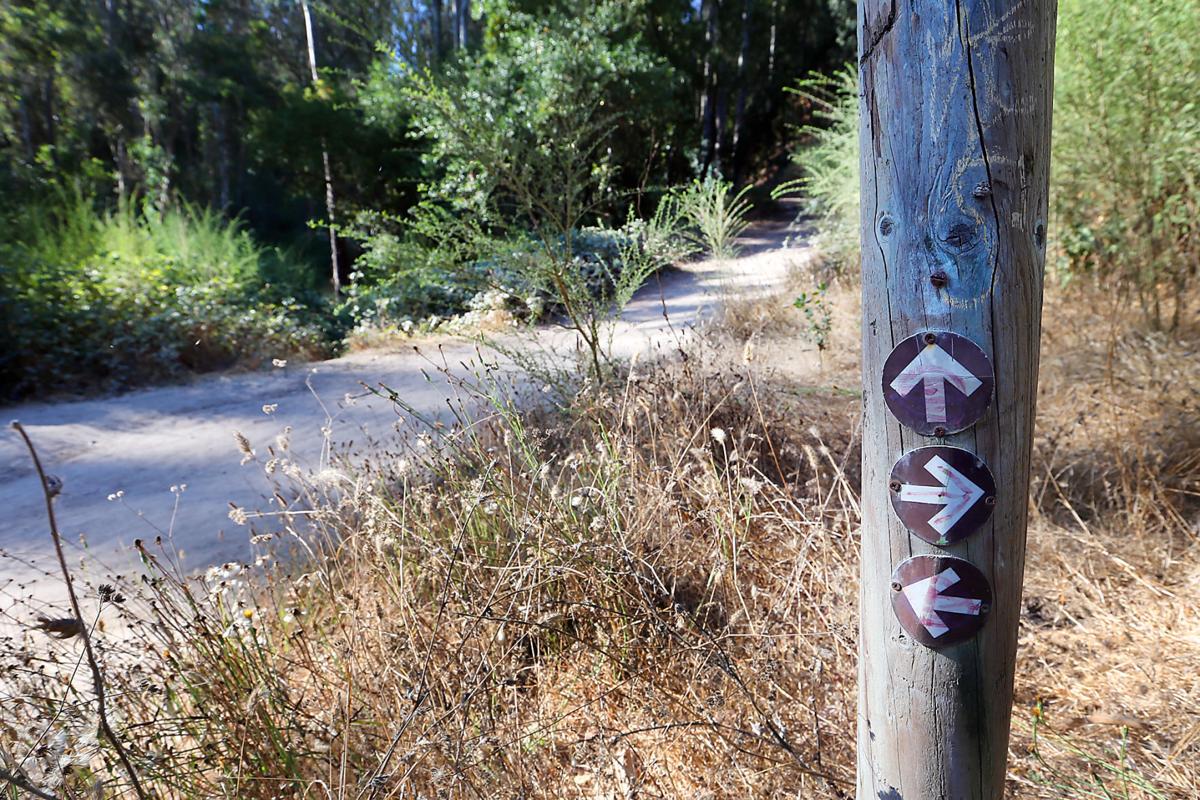 Arrows direct hikers to various trails at Westwood Hills Park, which opened 40 years ago as the city of Napa's first natural park. 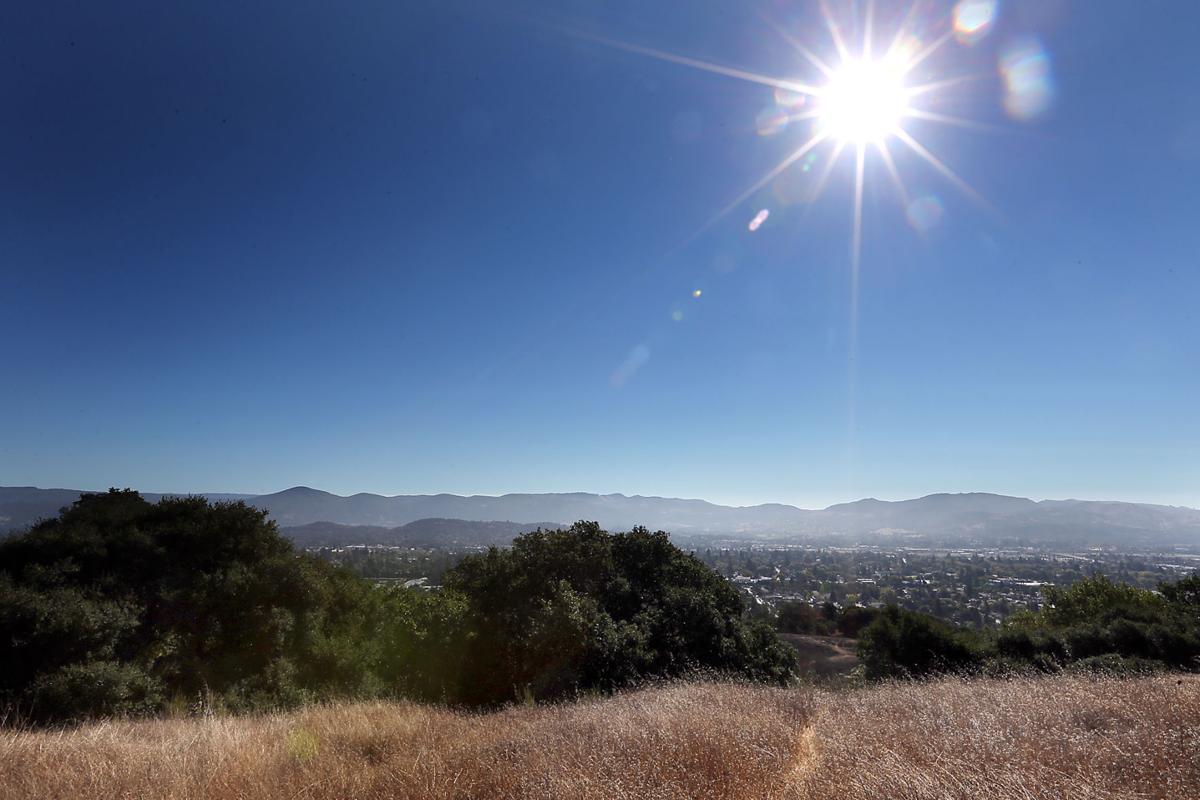 Westwood Hills Park, which opened 40 years ago as the city of Napa's first natural park, offers walkers sweeping views of the Napa Valley.

Westwood Hills Park is marking its 40th anniversary as the city of Napa’s pioneer, back-to-nature open space without any celebration, but a whole lot of use.

Amy James first visited the park in the 1990s. On a recent weekday, she hiked to the park’s signature destination, a prominent ridge with bird’s-eye views of Napa subdivisions and businesses in one direction and vineyards and oak-covered hills in another.

“It’s free and it’s fun,” James said. “Something to do with the family.”

She savors not only that attention-grabbing view from the ridge, but also the less-flashy views along the dusty main trail.

“I love this part right here – coming down with the eucalyptus trees and the tall grass,” James said. “It’s just pretty.”

The nation’s bicentennial year of 1976 proved a watershed year for Napa park creation. City parks until that point had been the more typical versions with landscaping, sports fields, sports courts and playgrounds.

Napa broke the mold when it opened 106-acre Westwood Hills Park that spring. At the same time, it was working to buy 157 acres in north Napa along Dry Creek Road that would ultimately become its second open space area, Alston Park.

The city has opened still more natural parks since then – 15-acre Timberhill Park, 12.7-acre Oxbow Preserve and 31.5-acre Trancas Crossing park. Skyline Wilderness Park along Imola Avenue was established in 1980, but isn’t a city park and is in the rural county.

Westwood Hills Park blazed a trail for a new type of city park.

The preliminary work to create Westwood Hills Park was underway in 1975. Michael Joell, a city planner at the time, helped shepherd the park into existence after watching growth in the Browns Valley area.

Joell, city recreation committee member Barbara Corotto and others looked over the Westwood land. They realized this would be a different type of Napa park, if the idea moved forward.

“It was too hilly to be useful for baseball games and so forth,” Joell said. “It’s up and down. It’s good for hiking. You can see deer and lots of critters.”

Corotto recently recalled those days when Westwood Hills Park was still a proposal rather than a reality.

“There were a lot of folks who thought it was silly to have a park that was left in wilderness,” she said. “It was really Mike’s dream and we convinced the city it was a good thing.”

In December 1975, the city of Napa decided to buy the hilly Westwood land along Browns Valley Road for $160,000 from Crayton Jones, Bruce Jones, Arthur Jones and Sidney Nelson, and just in time. The sellers wanted the deal done by year’s end for tax purposes.

Westwood Hills Park would become the first major park since the city had created Kennedy Park along the Napa River in the mid-1960s. It opened in spring 1976, but hardly in auspicious fashion.

The park had limited access at first. Users had to crawl under barbed wire along an unmarked fence off of Thompson Avenue, The Napa Register reported that year.

Even that access soon went up in smoke. A late June fire in the park threatened several new homes. Fire Chief Milton Ochs decided Westwood needed to close for the summer.

“By and large, the park is out of service whether I posted it or not,” Ochs said. “Nobody could go up there and enjoy themselves, believe me. It will remain out of service until the grass turns green and heals itself. It’s a yucky mess right now.”

Joell sprang into action. As chairman of the Sierra Club, he organized a volunteer effort to clear brush and build fire breaks.

In 1978, the city set about developing better access to the park. It bought land along Browns Valley Road to create a parking lot and today’s main park entrance.

“Early on, it was sparsely used,” Corotto said. “You could always just go into the parking lot, and if there was anyone there at all, it surprised.”

The Napa Register in 1983 called Westwood Hills Park the city’s “best kept secret” of a park. Although the park had that Browns Valley Road parking lot, it had no prominent sign proclaiming its existence.

Forty years later, Joell sees Westwood Hills Park as being a big success. He lives nearby and passes by the park just about every day.

“It’s always amazing to see 20 cars lined up along the roadway because there are only 13 spaces in the parking lot,” he said.

Westwood Hills Park has seen changes over the years. The Carolyn Parr Nature Center moved there in 1984, its mobile building being hauled from its previous home at the Vintage High School parking lot.

Joell as a city councilman in 1984 tried to limit hillside development, in part because he feared a home could be built on the ridge abutting Westwood Hills Park. A council majority declined to enact such a law.

A local developer in 1990 built his massive house next to park boundaries on the ridge that is the park’s most popular destination. No longer did park visitors have largely unobstructed views of the Bay Area to the south.

“In effect, the view from the top of Westwood Hills Park has been vandalized,” Napa Register columnist Kevin Courtney wrote that year after hiking to the ridge.

Another controversy involved telecommunication towers on the same ridge just outside of park borders.

Napa approved the first couple of 49-foot-tall towers for Napa Cablevision in the early 1970s, before Westwood Hills Park existed. It approved a 61-foot-tall telecommunications tower in 1989.

In 2001, the city approved turning the towers into two 35-foot-tall faux pine trees. The fake trees wouldn’t enhance the Westwood Hills Park experience, but would be better than the regular towers, a city study concluded.

“It was not the tree we envisioned,” Joell recalled. “We got something that looked like a Monterrey pine. That was an indigenous oak forest.”

Westwood Hills Park might be a natural park, but the city of Napa still at some point would like to make improvements. Ideas include improving trails, expanding the parking lot, adding more benches and picnic tables and adding the park’s very first restrooms.

“Nothing huge, but just some incremental conveniences that would make the park more usable and more attractive,” city Parks and Recreation Director John Coates said.

Meanwhile, Napa has targeted a site for its next nature park. It is to be on 58 acres of city-owned land at southern end of Jefferson Street, on the southern edge of the city. The flat land has fill from the Napa River flood control project that elevates it amid a vast area of wetlands.

Napa at one point looked at using the site for such things as soccer fields, but the adjacent neighborhood resisted. Latest plans call for establishing a nature-themed play area, a wildlife viewing area and trails that connect to adjacent wetlands trails.

The city hasn’t scheduled the South Jefferson property for master planning, which means the park won’t open in the foreseeable future. Napa has other park priorities in the near-term, such as doing a master plan for Garfield Park and sprucing up existing parks.

And Westwood Hills Park is the 40-year-old granddaddy of them all.

1. The ridge. This is more than a half-mile hike up the main path in the park. The ridge has views of city of Napa homes and businesses, vineyards and brushy, oak-covered hills.

2. The west side. Less people seem to go here then on the ridge trail. This part of the park includes several mile of trails through oaks and other woodlands, picnic tables on hills and rural views, with the city of Napa often out of sight.

3. The eastern hillside. Off-the-beaten track trails along the steep hillside offer views of the city of Napa.

4. Carolyn Parr Nature Center. The center is located near the parking lot, so people can visit it without a hike. It contains such features as mineral displays and dioramas of local plants and animals. Go to http://cpnaturecenter.com for more information.

Forty years after Napa bought the Alston Park land for a never-built mega-sports complex, the 157 acres of brushy open space seems to have – f…

Geovana Fuentes of Napa stretches during a hike at Westwood Hills Park with her daughter, Andrea Sierra. She says they’re at the park at least three times a week. Westwood Hills, which opened 40 years ago, was the city of Napa’s first natural park.

Elisa Fernandez walks a trail while carrying her daughter, Angely at Westwood Hills Park. Fernandez says she has been hiking regularly at the park for 15 years.

Napans Mary La Monica, left, and Nikki Grimshaw hike a trail at Westwood Hills Park. The pair says they hike the park, which opened 40 years ago as the city of Napa's first natural park, a few times a week.

Fred Hansen of Napa, who says he hikes at Westwood Hills Park at least three times a week, makes his way along a trail on a weekday morning.

Arrows direct hikers to various trails at Westwood Hills Park, which opened 40 years ago as the city of Napa's first natural park.

Westwood Hills Park, which opened 40 years ago as the city of Napa's first natural park, offers walkers sweeping views of the Napa Valley.